Flutter vs. Swift for iOS development 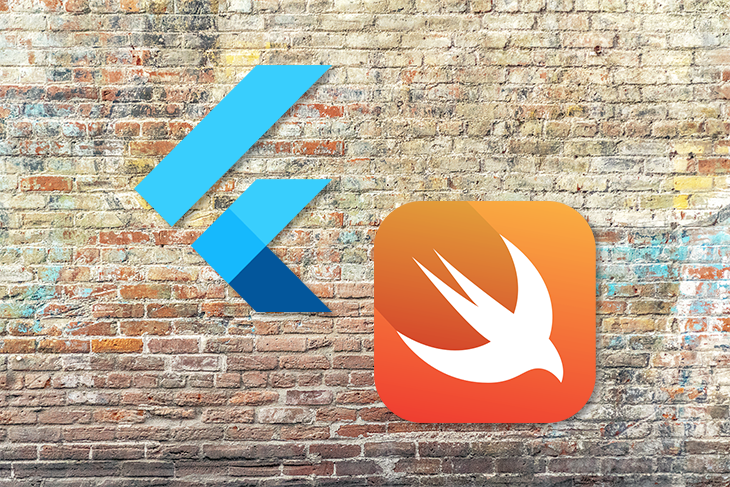 In this guide, we’ll compare Flutter, a cross-platform, open-source toolkit for building UIs, to Swift, the primary language for building apps across iOS and macOS. We’ll evaluate each programming language in terms of features, ease of use, and overall developer experience for building iOS apps. We’ll also offer some guidance to help you choose which language to learn or use for a given iOS app development project.

Swift vs. Flutter: A high-level overview

Swift is an open-source, general-purpose programming language built by Apple for iOS, macOS, watchOS, and tvOS app development. It’s a modern, fast, safe, and interactive language that is easy for beginners to pick up.

For example, to output (print) a message to the console, you simply use the print() method:

And then there’s Flutter, Google’s open-source UI toolkit for building cross-platform native user interfaces from a single codebase. Flutter now supports the development of apps that can also run on the web and desktop.

The Flutter framework is built with Dart. To build apps in Flutter, you must have some knowledge of the Dart programming language.

Dart is a client-optimized language for developing apps on any platform. It’s terse, strongly typed, and object-oriented and supports sound null safety.

Setting up your system for iOS development

Before you start building an iOS app, the initial setup includes adding basic tooling such as system and IDEs to get up and running. Let’s walk through how to set up your system for iOS development using both Flutter and native (Swift) tooling.

To build an iOS app using Flutter, the first step is to download the installation bundle and extract the file to the desired location. Next, install Xcode. You can then use any IDE of your choice to build your Flutter iOS app.

To set up your system for building iOS apps natively using Swift, all you need is a macOS and Xcode. This makes it a bit easier to set up an iOS development environment in Swift than in Flutter.

Building an iOS app with Flutter and Swift

Now that we’re set up, it’s time to get our hands dirty and start building the starter file for a new project with both Flutter and Swift iOS.

Create a new Flutter iOS app by running the following on the command line in the directory where you want to place the project:

Flutter will create a Flutter starter app, as shown below: 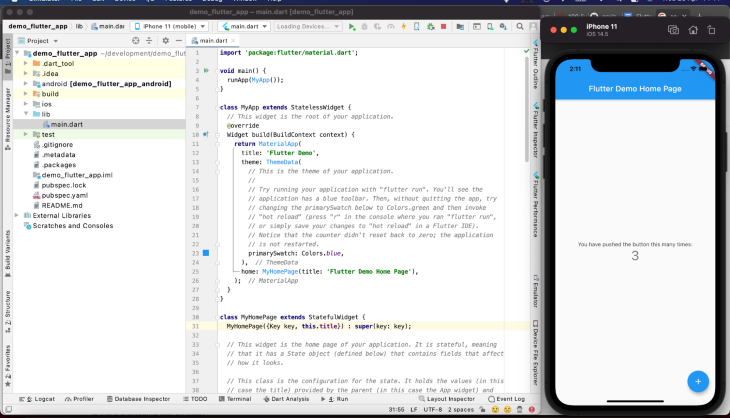 To start a new iOS project using Xcode, click Create a new Xcode Project, then select App, then input the project name. Click Next and create a project in your chosen directory.

Xcode will create an iOS Starter App that displays “Hello World” when run in a simulator, as shown below: 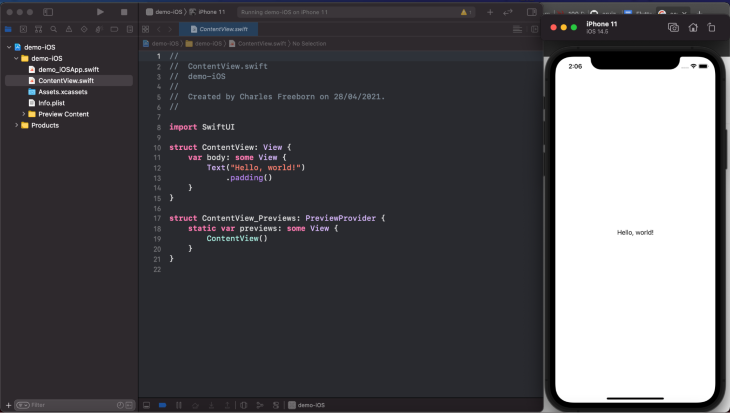 Unlike Flutter, once you create a project in Xcode, Swift’s iOS starter app is light and easy to get up to speed. This is because you only need to get comfortable with the Swift programming language, whereas Flutter requires an understanding of how to write in Dart.

The main entry point for Swift’s iOS app is Content.swift; for Flutter it’s main.dart under the lib directory.

Flutter has extensive documentation, which is all you really need to start building iOS apps with the toolkit. Google Flutter codelabs is another great resource that enables you to get your hands dirty with Flutter.

But before you can build any kind of app with Flutter, you need to learn the Dart programming language. Fortunately, there is a growing and supportive community of developers creating new learning resources all the time to help new Flutter developers get oriented with Dart.

Similar to Flutter, the official Apple docs are the perfect place to get started learning to build native iOS apps using Swift. The docs also include instructions and guides for using SwiftUI, a declarative framework for building user interfaces for any Apple platform.

When it comes to learning curve and approachability, Swift has an edge over Flutter because, as mentioned previously, you don’t need to learn a new programming language to build native iOS apps. That said, thanks to their rich documentation and community support, both Flutter and Swift are relatively easy to learn.

In this section, we’ll evaluate the time it takes to develop a fairly standard iOS app using Flutter compared to Swift. We’ll consider things like debugging and testing in our analysis. Of course, the time it takes to deliver an app also depends on the complexity of the project, the developer’s skill level and working style, etc.

Dart has support for just-in-time and ahead-of-time compilation, which is why Flutter supports stateful hot-reload — instant updating of UIs when changes are made to the code while the app is still running. This invariably leads to high developer velocity.

With Flutter’s single codebase for all (Android and iOS), teams can release cross-platform apps on time, reducing the cost of developing apps on different platforms and accelerating the time to release MVP.

Even though Swift is the native language for iOS app development, when changes are made to an app, you’ll need to reload the app to see the changes.

Flutter app’s reloading is faster thanks to hot-reload, giving it the edge over Swift when it comes to developer velocity and the time it takes to deliver an iOS app development project.

Next we’ll examine the process of creating a user interface for an iOS app using Flutter and Swift. We’ll wrap up the comparison by building a simple app using Swift and Flutter to demonstrate the process associated with each.

Building a UI with Flutter for iOS

At the core of Flutter app development is widgets. A widget is a description of a part of a user interface.

Flutter comes with customizable widgets, such as the Text() widget, which you can use to create UIs. Widgets also have properties, such as background, width, height, etc. There are two types of widgets: stateful and stateless.

With widgets, you don’t need to bother creating UIs from the ground up. You can simply take advantage of the customizable widgets that Flutter provides.

Below is an example of using Flutter to write a Hello World program:

Building a UI with Swift for iOS

With SwiftUI, you can create UIs for all Apple platforms. SwiftUI takes a declarative syntax approach that’s easy to read and natural to write.

Below is an example of using SwiftUI to write a Hello World program:

At the end of the day, it’s possible to create beautiful and engaging UIs for iOS apps using both Flutter and Swift, and both enjoy amazing community support. That said, Swift stands out for its brevity of code compared to Flutter.

According to the Flutter docs, it’s possible to add Flutter to an existing iOS application. In this section, we’ll show you how to port a native iOS app to Flutter.

To add Flutter to an iOS app, first create a Flutter module in the root directory of your project.

Running the above command in the terminal causes Flutter to automatically run the flutter pub get, which adds the Flutter dependencies to the my_flutter/pubspec.yaml file.

Note that I named the flutter module my_flutter1 for the demonstration above.

Here’s the structure of the my_flutter module directory via the docs:

Note that the .ios/ directory is a hidden subfolder.

The next step is to embed the Flutter module into the iOS app. The docs outline two ways to embed Flutter in an iOS app:

The recommended method is to use the CocoaPods dependency manager, so we’ll proceed accordingly.

Assuming you’ve installed the Flutter SDK, add a Podfile to the application. A Podfile is a specification that describes the dependencies of the target of one or more Xcode project.

Open the Podfile using an editor (I recommend VS Code) and paste the code below:

On the Podfile target, between the do and end, add the following to embed Flutter:

Next, run $ pod install on the terminal. Now your iOS app is embedded with Flutter.

You can now build your project in Xcode using the build and run play icon or command + B. But first, exit Xcode, launch it again, and open the project’s .xcworkspace.

Your iOS is now ported to Flutter and you are ready to start building.

In this guide, we compared the developer experience associated with the Swift programming language for building native iOS against that of Flutter, a UI toolkit, for building cross-platform (specifically iOS) apps.

In my opinion, the choice of whether to build your next iOS app with Flutter or Swift depends on your preference for and comfort level writing in Dart vs. Swift. The obvious advantage of building an iOS app with Swift stems from the native Swift programming language and Apple’s SwiftUI framework. Building iOS apps with Flutter, on the other hand, enables you to build iOS and Android apps with a single codebase. For more information about building cross-platform apps with Flutter, check out “Pros and cons of Flutter app development.”

In closing, let’s summarize a few key takeaways from our comparison of Flutter vs. Swift for iOS development:

2 Replies to “Flutter vs. Swift for iOS development”