GraphQL vs. gRPC vs. REST: Choosing the right API 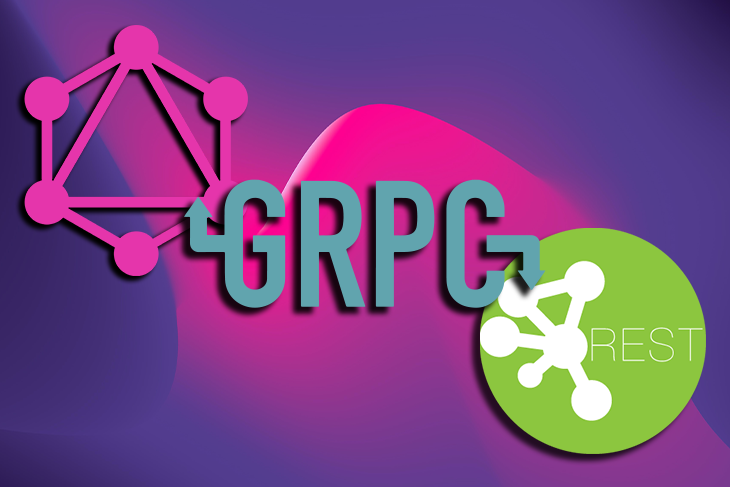 The standard for data exchange between frontend and backend has always been a bit contentious.

With different API technologies available for sharing data between clients and servers, and each one having its own set of unique capabilities, it can be quite daunting trying to decide which one serves you best.

The three most popular technologies currently for creating APIs are GraphQL, gRPC, and REST. In this post, we’ll look at how each one works, including their pros and cons.

GraphlQL is a data query language that uniquely allows clients to request any specific data that they need. As opposed to REST’s HTTP methods, GraphQL uses queries, mutations, and subscriptions for sourcing and manipulating data.

Queries request data from the server while mutations send data to and modify data gated by the server. Subscriptions get live updates when data changes, usually through Websockets.

In all, GraphQL supports languages like JavaScript, Java, Python, Ruby, PHP, and more.

With GraphQL, data is represented through schemas. A schema defines an object, the fields that the object contains, and the type of data the fields can hold. Here’s an example schema:

Here, User is the object, and inside it, we specify the fields or properties the object has, including data types.

What this means is that in any query operating on the User object, the only fields that can appear are name and age. For both of these fields, the only kinds of data that can be written to or read from are strings and numbers, respectively.

In GraphQL, when field types are trailed with exclamation marks like what we have above, it means that the fields are non-nullable. They must have data written to them when the object updates and the fields always provide values when queried.

As mentioned before, there are mainly three actions that can be performed on data objects: queries, mutations, and subscriptions. These can also be defined using GraphQL’s schema language.

With a query schema, you can request data from your GraphQL server by specifying the object and fields under the object you’re interested in:

Above, we request a list of the users in the database, specifically their names and ages. The user object could have other fields like gender or job title, for example, but only the fields we requested will be sent to us.

This is one advantage that GraphQL has over REST. In REST, when an endpoint is queried, all the data behind that endpoint is sent to you, leaving you to sort through the array and select the particular fields you need.

GraphQL is more flexible because it allows you to customize the structure of your result. This saves you the memory and CPU consumption that goes into filtering data.

And, because GraphQL queries generally request less data, they are usually processed faster than REST requests.

With a mutation schema, you can make changes to existing data or post new data to your database. For example, if you wanted to create a new user or update the details of an existing user, you’d use mutation:

With a subscription schema, you can subscribe to an object and have your server update your client in real-time whenever changes are made to that object.

For example, if you want your client app update in real-time whenever an existing user is deleted or modified, or a new user is created, you can subscribe to the User object and your fields of interest:

With GraphQL, you can define the exact scope of data required in every instance. By preventing excess data from sending from the server to the client, your app performs better.

Since you can select multiple fields from different resources in a single query, GraphQL eliminates the need to carry out multiple round trips to the server to fetch data for your client.

With so many third-party code generators, it is easy to write GraphQL code for one platform and have it created automatically for a second platform using these generators. You can explore the possibilities over at GraphQL Code Generator.

As you can define the exact data you want the server to respond with on the frontend, you can add new fields to the data model on the server side without the need to create a new versioned API. This also leads to less breaking of frontend code just because you added a new field to the model and forgot to update the frontend code.

GraphQL has some serious caching problems (specifically HTTP caching) that have contributed to the prevention of its widespread adoption.

Due to the way GraphQL queries are written, requesting too many nested fields at once can lead to circular queries and crash your server. Implementing rate-limiting in REST is more seamless.

GraphQL also doesn’t support file upload out of the box and requires a workaround to implement this functionality.

GraphQL support is still flaky for different web/application frameworks compared to REST. The JS ecosystem has the most support, but the landscape is changing and the support is improving day-by-day for other languages and frameworks.

And finally, compared to REST, GraphQL has a steeper learning curve.

The most popular and most used API format on the list is REST, which stands for representational state transfer.

When in use, for example, a GET request can perform on a URI that typically looks like /api/users; a REST operation typically returns data from the server to the client.

Caching is easy in REST because it takes advantage of HTTP by eliminating the need for your client and server to constantly interact with each other, improving performance and scalability.

REST’s maturity in the tech world is one of its biggest advantages. It is ubiquitous, as opposed to GraphQL and gRPC, which can be considered niche solutions to creating APIs.

Due to REST’s popularity, lots of developers are already familiar with it and find it easy to work with. And so, if you create a commercial API for many third-party developers to consume, then REST might be the best option for you.

It is easier to monitor and rate-limit REST based APIs compared to GraphQL as each resource is usually located behind a unique endpoint. As a result, individual resources can also be easily locked behind a paywall.

Large payloads; where you can select specific fields under a resource in GraphQL, REST requires you to request all the data under the resource before looping through it to get the data you need, which often results in large payloads. You can counter this by creating a new endpoint or adding server-side filtering based on query args, but it is not feasible to do that for each use case.

While with GraphQL we can batch different resource requests and send them to the same endpoint at /graphql, and executed once in one round trip, with REST, different requests must be sent to different endpoints, resulting in multiple round trips.

GraphQL makes making changes to a database schema very easy. Since queries only involve requesting specific fields, new fields can be removed from a resource without causing breaking changes and requiring you to version your application.

gRPC also comes with its own backward compatibility features that make it easy to update your data structure without breaking clients’ code. REST does not come with this flexibility.

Services are defined to pair API requests with their corresponding responses, and the protocol buffers compiler generates the server and client code artifacts for your API service:

Protocol buffers, which gRPC comes out of the box with, support more data types than JSON, and it’s significantly faster, thanks to its optimized binary format.

gRPC supports full-duplex streaming out of the box, which makes it suitable for features like video and voice calls. With REST on the other hand, queries are handled one at a time.

gRPC performs load balancing so that client requests are evenly distributed across servers to avoid overloading a particular server. This improves the overall performance of your application.

The load balancing feature, as well as the fact that gRPC uses HTTP2 by default, makes latency in gRPC much lower than in REST APIs.

gRPC is designed to be backward compatible, so adding new fields/methods to a gRPC service doesn’t generally break existing clients. This makes sure that you don’t have to update all existing clients when you modify the service.

Protocol buffers, gRPC’s official data format, currently only supports a handful of languages. It doesn’t support languages like R and Swift. JSON, which REST uses, is supported by virtually all languages.

gRPC doesn’t come with browser support out of the box, although there are some workarounds for it. You will have to use gRPC-Web, which is an extension of gRPC for the web and is based on HTTP 1.1. It doesn’t provide all gRPC features, but is a nice bridge if you want to use gRPC in the browser.

gRPC vs. REST vs. GraphQL comparison

At the end of the day, the best API technology for your specific project will depend on what you are trying to achieve. If you need a generic API that will be used by a lot of clients, then REST might be your best option.

If you need a flexible API that different clients will use to make many unique requests, then it might be best to let the clients create their own unique queries and get only the specific data they need quickly, and you can achieve this with GraphQL.

If want to create fast, seamless communication between internal services, then gRPC is your best option.

As we’ve seen, all three have their pros and cons and you can get optimal results by combining technologies.

5 Replies to “GraphQL vs. gRPC vs. REST: Choosing the right API”