3 annotations to use in your GraphQL schema

GraphQL’s descriptive query language and parallel resolvers architecture has helped many companies like Shopify and Github deliver powerful data APIs to their users.

A lesser-known feature of GraphQL called annotations is now used everywhere by libraries like Apollo or Relay to provide a better developer experience.

This article will introduce you to annotations and guide you through the most common usage for 3 helpful annotations.

Annotations, or directives, that help you follow the official GraphQL specification are an official feature of the GraphQL language.

A directive is easily recognizable by the @ character, as shown below:

In this example, taken from the official GraphQL documentation, the directive’s name is “include.”

For simplicity, this article only covers a subset of the directives’ possible locations (mostly operation’s fields).

A complete list of possible locations is available on this excellent Stack Overflow answer.

Directives can be seen as GraphQL syntax shorthands to carry additional information to the GraphQL server or client for the execution of the query or mutation.

The @include directive indicates to the GraphQL server whenever the fields should be included or not in the response data JSON body.

Apollo Client is “providing” the @client directive as a shorthand to indicate if a field value should be fetched locally or remotely on a GraphQL API.

We will take a close look at the @client directive in the next section.

Let’s analyze how the @include directive works when applied on the following query:

When parsing the incoming operation (Hero query), the server navigates through each field, calling the resolver to get the appropriate data.

When reaching the friends field, the GraphQL server encounters the include directive and calls it, along with the field definition and the associated resolver.

The include directive will call the friends resolver only if the if param value is truthful.

To sum up, on the server side, directives “wrap” the field resolvers to:

Let’s now get more practical by reviewing many types of directives, including the standard ones, Apollo custom directives, and community-driven directives.

Universal directives for your applications

We are now familiar with directives syntax and their inner workings. Let’s take a look at some that you’ve probably already used without even noticing.

Standard directives for your schema

The following directives, defined by the GraphQL specifications, are meant to be supported by any GraphQL server (any server library, not only Apollo, that follows the GraphQL spec).

The specification defines three directives, including the @include directive seen in the previous section.

This directive act as the opposite of the @include directive, including the targeted field, only if the if parameter value is false.

Unlike the directive we saw before, this directive is meant to be used on a type definition — not an operation (query/mutation), to provide extra information on the type itself.

Using this directive to indicate deprecated fields have many advantages:

Modern use-cases of directives on the client side

Client side directives are only defined on the client side, which means that the targeted GraphQL server is not supposed to receive them. 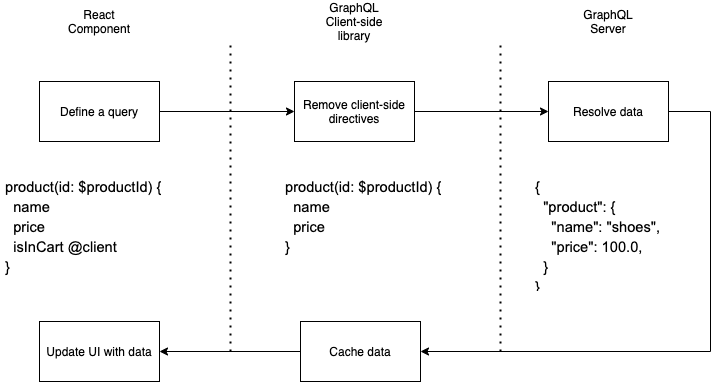 An extra step not shown in the above graph is that the client side directive execution can happen:

To sum up, client side directives can interact with cached data and provides features around cache management.

As seen above, the following GraphQL query is using a client side directive, called @client.

The @client directive, provided by Apollo Client, indicates that the isInCart field is local, meaning that no request to the GraphQL Server is required to get its value.

As shown in the graph below, our query will be executed in many steps: 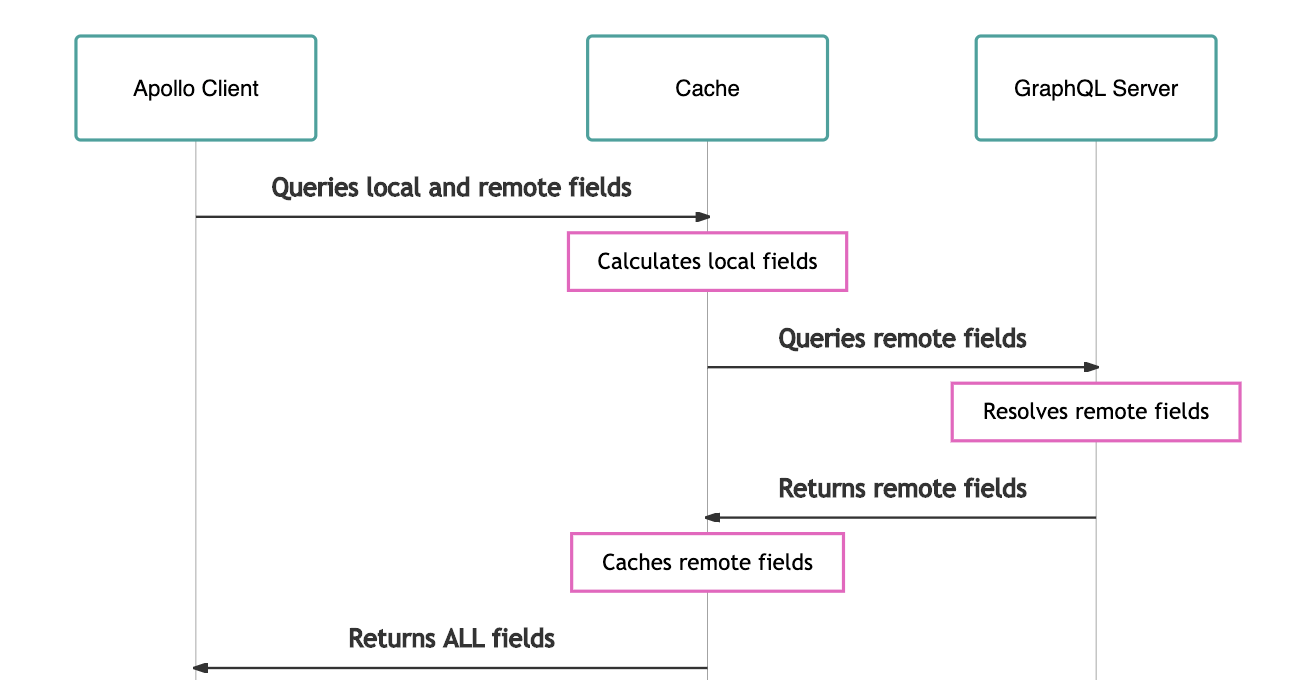 Apollo Client has some improvements regarding @client usage. The following query use only local fields and will not trigger a request to the GraphQL server (since there are no remote fields):

The GetCartItems query a perfect example of a “local state” usage of Apollo GraphQL, brought through a delightful experience thanks to directives syntax.

Another smart usage that provides a great developer experience is the client side @export directive:

This directive, provided by Apollo Client, allows you to reuse any local field value (via @client) as a variable for a field, or a subquery of the current operation.

The CurrentUserPostCount query is another example of a smooth experience around state management with GraphQL that Apollo is providing.

Without the @export use, a separated query and added logic would be necessary to achieve the same GraphQL query.

3 powerful annotations for your schema

We saw good examples of directives provided on both the client and the server side by the official specification and major libraries.

Let’s now focus on 3 powerful server side directives that you can start using to supercharge your GraphQL schema.

Provided by the GraphQL Community organization, the @computed directive is particularly handy at solving a ubiquitous problem: repetition and scaffolding.

Many times, in real world applications, some properties are simply computed or derived from existing ones.

Writing resolvers for those computed properties is cumbersome and unnecessary.

Here, the User.fullName property does not require a resolver method. @computed will automatically compute the proper value when requested.

Full installation details are available on the official repository:

The directive allows creating a computed property from fields where is defined. yarn add graphql-directive-computed-property This package requires graphql and graphql-tools as peer dependency Query: Result: Example: admin: String @rest(url: “${URL_TO_API}”) @computed(value: “Are you admin? $admin”) Directive params: The calculated value. It can contain other fields from the type in which it is defined.

Using this directive on your schema will help you keep your resolvers scaling.

The @auth directive provides an elegant solution to the authentication and authorization GraphQL APIs design challenge.

Both directives apply to the fields definition, as shown on the following schema:

By reading this schema, we understand that:

Running the following query is only achievable by an admin, being the only user that has access to all users’ purchases lists:

graphql-directive-auth is relying on JWT, operating in two modes:

This library, thanks to GraphQL directives, provides an easy way to add an extendable authentication layer to your GraphQL API.

Full installation and custom configuration details are available in the official repository:

Most frontend applications make the choice to do all the data formatting on the client side, resulting in kb of third-party formatting libraries.

The @saeris/graphql-directives package provides a set of 30 directives that will allow your frontend to let the API do all the heavy lifting for formatting.

Let’s highlight the most interesting directive:

The @formatCurrency is especially interesting given the complex subject of formatting currencies.

The interesting thing is that, as a type definition directive, @formatCurrency augments the applied field resolver to allow clients to pass optional formatting arguments such as format or currency at query time.

The same goes for dates, numbers, phone numbers formatting, and over 20+ directives for Strings and Measurements!

This package is definitely a must-have for a modern GraphQL API. Take some time to look at the official repository: https://github.com/Saeris/graphql-directives#formatdate

Directives are a visual and flexible way to extend type definition capabilities and the execution of GraphQL operations (query and mutations).

On the client side, directives are mainly used to customized cache behavior and add some local state management capabilities (@client).

For this reason, the main power of directives is the ability to write your own in order to:

Building directives is achieved by using the SchemaDirectiveVisitor API from graphql-tools.

A good starting point to learn this API is the great Apollo documentation page dedicated to this subject.

I hope that the three annotations recommended in this article will inspire you in writing your own. Please know that directives are just getting started in the GraphQL ecosystem, since many more features are coming in the future @defer, @live, @specifiedBy.

Charly Poly Follow Senior Software Engineer at Double, former Tech Lead at Algolia. I'm passionate about web software engineering, from frontend development to working on APIs, mostly on TypeScript, GraphQL, and Ruby ecosystems.
« What’s missing in your ecommerce stack?
Switching from GraphQL to REST? Take a load off with Sofa »