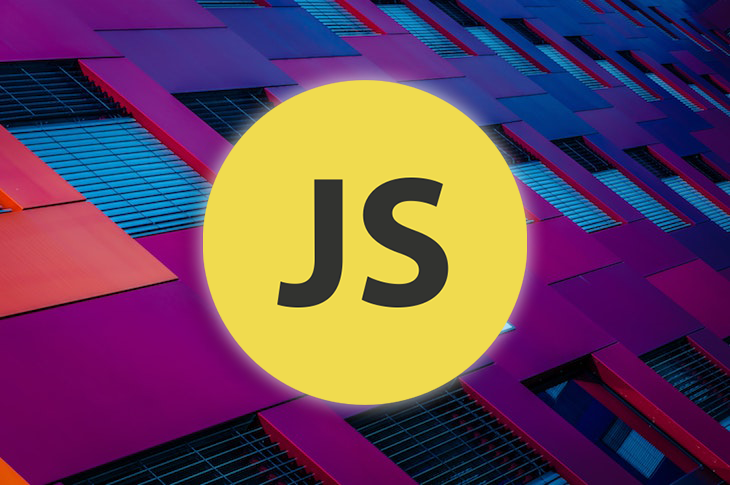 The way that we develop applications has changed a lot over the past few years. With new frameworks being released daily, having a flexible tech-stack, for example, building some parts of your app in React and others in Vue, is highly beneficial when working across teams.

Micro-frontends allow us to build web apps that are developed and deployed separately but work as a single app. Micro-frontends are one common approach to achieving greater flexibility, allowing teams to merge components built in different frameworks or libraries. In production, there are several different ways to implement micro-frontends.

The single-spa router uses a single-spa root config file, which holds information like shared dependencies, as well as several individual SPAs packaged into modules that communicate with each other and single-spa via APIs.

Another popular solution is webpack’s Module Federation, which was introduced as one of the core features in webpack v.5. Module Federation solves the problem of code sharing by allowing applications to load code from each other. However, Module Federation is a bit verbose and lacks the option for customization.

Getting started with Fronts

We can hook into the lifecycle methods provided by Fronts apps and perform the required operations. Finally, the Fronts API is somewhat generic and framework agnostic, meaning we can apply it to a wide variety of use cases.

In addition to Module Federation, Fronts offers a version control mode that allows version management of the different component applications.

Looking into the Fronts API

As we mentioned before, the Fronts API is pretty straightforward. However, it’s worth taking an in-depth look at its code. Fronts includes three different loaders, selecting the correct one based on the requirement.

getMeta() is a tool used to get the full picture of the dependency map. Calling getMeta() returns a JSON of the entire monorepo structure, along with all the component apps and their dependencies.

Finally, Fronts provides APIs for communicating among the different component micro-frontends. globalTransport.listen helps configure global event listeners by providing a string event and a listener that is triggered when that event is fired.

The globalTransport.emit function emits events that the previous function will listen to. It takes a string event name as the first argument and its value as the second argument.

Now that we understand the essentials of Fronts, let’s run through an example to understand Fronts in greater depth.

For our demo, we’ll work on top of the official fronts-example repo. The container ecommerce site is the parent, and the products page is the child. To follow along, you can access the completed example repo. It uses Chakra UI for its UI components and has a hardcoded products.json file along with a dummy cart.

Our final micro-frontend example will look like the image below: 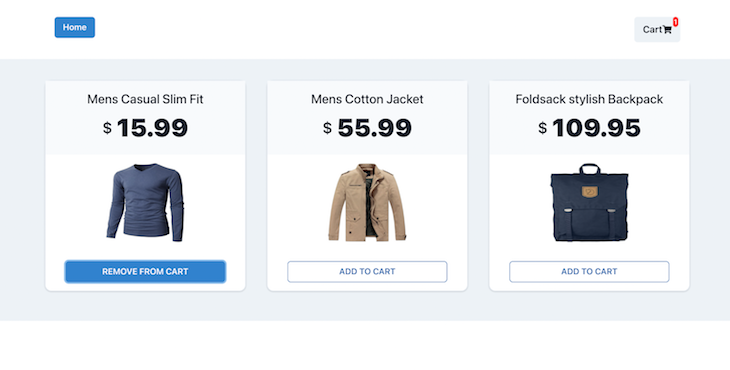 To run the application, clone the repository, then run the following command:

Next, run the code below:

To play around with and test the application, visit localhost.

The folder structure of each individual app looks roughly like the following code segment:

Let’s look at each specific file in greater detail.

As the name suggests, we’ll use the bootstrap.tsx file to help us bootstrap our Fronts application when it is loaded in the browser:

Inside of the function, the React app is rendered as we would a normal React app. It also returns an arrow function that calls the ReactDOM.unmount on the element when it is no longer required.

As a user of the Fronts library, all we need to do inside of the bootstrap.tsx file is call the boot method, and Fronts will take care of the rest.

site.json is another important file that specifies a lot of configuration details for the app. Here’s how it looks for app1, the container ecommerce app:

Looking at the same file in app2, we see that it looks slightly different:

Specifically, we see an extra exports key. This is because app2 exports certain functionality that can be used by other applications. In the example above, the src/bootstrap file is exported, meaning that the entire app can be imported in other Fronts applications like it was by app1.

If you take a look at the app1/src/App.tsx file, you’ll see how the routes are being shared by the two applications:

The route / is for the homepage, which is handled by the HomePage component present in app1:

In the image shown above, the Home button and the Cart button come from the <Navigation /> component present in app1. The entire pink region is rendered by the <HomePage /> component.

Notice that the route /app2 is being handled by a component that uses the useApp functionality to generate a component from a separate micro-frontend. If we click on the Browse products button on the previous page, we are taken to the products page, seen below:

The app that displays the three products inside of the light grey background is an entirely different app that is being seamlessly rendered by Fronts.js. We’ll see the proof inside the network tab when we see a call to the bootstrap function of app2: 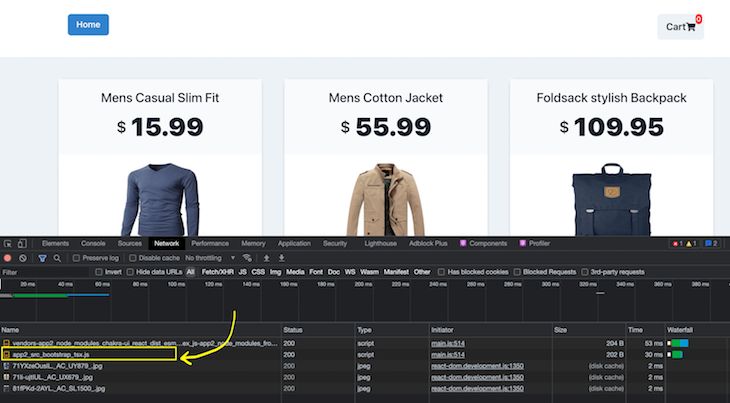 You might have noticed that upon clicking on the ADD TO CART button, the number shown at the top of the cart icon increments or decrements accordingly. Given that the two components are theoretically in two different micro-frontends, how are they communicating?

The communication happens courtesy of the globalTransport functionality exposed by the Fronts library. Inside app1/src/App.tsx, we’re setting up two global listeners for the increase and the decrease events respectively and modifying the cart count based on it:

Inside of the app2/src/App.tsx, we’re emitting the particular events when the corresponding buttons are being clicked:

Fronts is ensuring that the events triggered in one of the micro-frontends, the emitter, invoke the corresponding listeners in a different micro-frontend, the listener.

The Fronts library is written on top of webpack’s Module Federation in an attempt to simplify the process of building micro-frontends. Therefore, Fronts includes all the benefits of webpack out of the box. But when we compare both side-by-side, we see that Fronts has the following advantages:

Micro-frontends, which allow developers to work on parts of frontend applications separately and deploy them independently,continue to boom in popularity. Fronts truly shines by allowing developer teams to decouple the lifecycles of separate yet related applications without fearing breakages.

In my opinion, Front’s minimal configuration and its flexibility are currently unmatched. It is definitely worth considering as a framework of choice for your next micro-frontends project. I hope you enjoyed this tutorial.

Kapeel Kokane Follow Coder by day, content creator by night, learner at heart!
« What is Slate.js, and will it replace Quill and Draft.js?
Using Needle to send HTTP requests in Node.js »