GitHub Actions: How to autodeploy your app 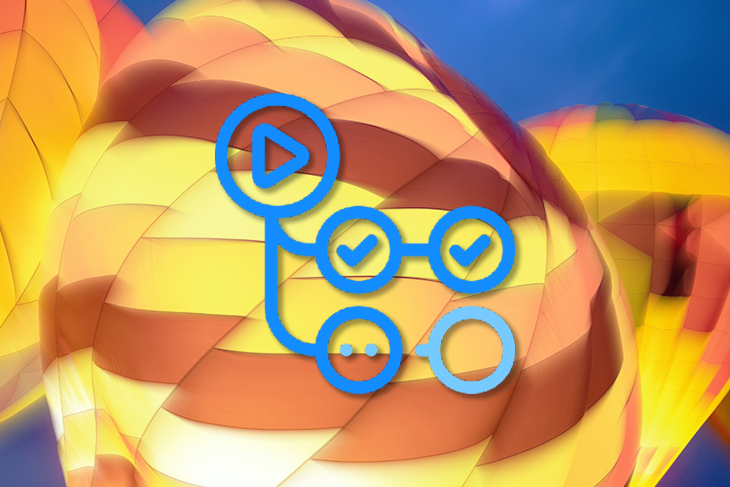 If you’ve ever worked on an app where you’re constantly publishing changes and fixing errors, then you know how painful it is to wait for preview builds and tests to run before you merge a pull request to your production branch.

In this tutorial, we’ll show you how to automate that process with GitHub Actions. We’ll build a sample Vue.js app, write some tests, and then push to our remote repository. We’ll trigger an action to run our tests and any other checks, then merge to the production branch automatically when all checks pass. This will trigger a build to production Netlify.

What are GitHub Actions?

GitHub Actions are instructions you create in your repository to automate certain processes in your project. GitHub Actions enable you to build, test, and deploy your code directly from GitHub.

Released in November 2019, GitHub Actions bills itself as “an API for cause and effect on GitHub.” It enables you to automate workflows based on specified events — such as push, new release, issue creation, etc. — and places those workflows in a repository so you can share, reuse, and fork your software development practices.

Netlify makes it easy to ship your web applications in three quick steps:

We won’t focus too much on how Vue.js works or how to test Vue apps. For a deeper dive, check out our tutorial on testing Vue components with Vue Testing Library.

Create a new project using the Vue CLI by running vue create auto-deploy and selecting the options below:

Open the project folder in your code editor and delete the /src/components/HelloWorld.vue component. For this demo, we’ll use the /src/App.vue component to build a simple to-do app and write tests for it.

In the App.vue file, replace the content of the file with the code snippet below:

The snippet above is for a basic to-do app from the initial content in the component. When you visit localhost:8080 in your browser, your app should look like this: 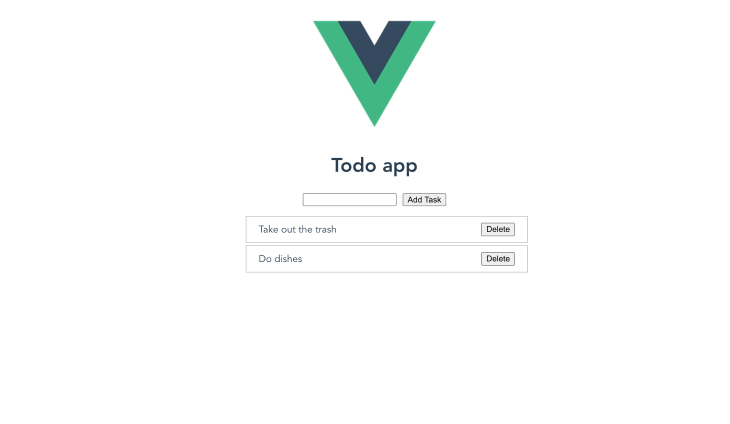 Now you can add to-do items and delete them.

Setting up unit tests in Vue.js

Since we selected the unit tests option when creating the project, the Vue CLI automatically set up the configurations for us and installed a package called vue-test-utils. This crate provides utility functions similar to those of the APIs in Vue. We can use these utility functions to interact with the components.

If you look at the package.json file in the root folder, you should see this command under the scripts key:

This is the command for running our unit tests. If you try running the command at this point, you’ll see a prewritten test run in your terminal. This is to ensure that everything is working properly and our test config is correct.

Now, we’re going to delete the /tests/ folder and create a new one in the project’s root directory called __tests__. Jest checks for test specifications in two folders: /tests/unit and __tests__. It’s all a matter of preference. For this tutorial, we’ll use the __tests__ folder.

Create an App.spec.js file in the newly created folder and add the code below:

The code above is a test suite to ensure our component behaves exactly as we want it to. We validated that adding new tasks and deleting tasks works and that the tasks actually rendered on the page.

Now that we have the app up and running with tests included, let’s deploy our new app on Netlify so we can set up deployment from GitHub Actions.

Be sure to create a new repository for your app on GitHub and push the code. We’ll be using GitHub for the rest for this guide.

Deploying to Netlify with GitHub Actions

On your dashboard, click the New site from Git button and connect your GitHub account to Netlify.

Select the repository for your new app and use the same configurations from the image below:

Click the Deploy site button and wait for your app to be ready.

You can open your app using the link automatically generated by Netlify.

Prepping for deployment with Github Actions

Netlify provides an autodeploy feature out of the box, but we don’t want to use that; we want GitHub Actions to handle the deployment on our behalf after running tests. In some cases, you may not want to deploy the changes at that instant — for example, if a feature is still in development and not ready to be rolled out.

We want to stop Netlify from automatically building and deploying our app whenever a push is made because Netlify deploys whenever a build is successful. We also want to factor in our tests, so we’ll use GitHub Actions to do that.

The first step is to stop builds on Netlify. To do that, go to Your site’s settings > Build & deploy > Continuous Deployment. Click the Edit settings button under the Build settings section and stop builds:

Now that we’ve disabled builds on Netlify, we need to set some secret keys provided to us by Netlify. These keys will allow us deploy our site outside Netlify.

The two main keys we need are a personal access token and the API ID of our newly created site.

The API ID of the site is located under Your site’s settings > General > Site details:

You’ll want to take note of that because we’re going to be copying and pasting to the app’s repository on GitHub. Don’t worry, its safe — you’ll see.

Go to your account’s settings. 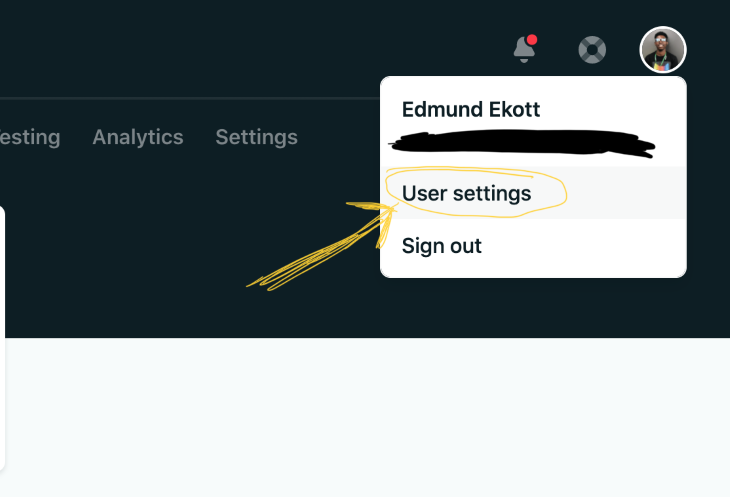 Under Applications > Personal access tokens, create a new access token and give it a descriptive name. Be sure to copy the token before leaving the page.

The tokens are only displayed once. If you forgot to copy them, you’ll have to create new ones.

Open your app’s repository, navigate to Settings > Secrets, and create two secrets. The first, NETLIFY_AUTH_TOKEN is for the personal access token you just copied. The second, NETLIFY_SITE_ID, is for your site’s API ID, which is located under your site’s information. 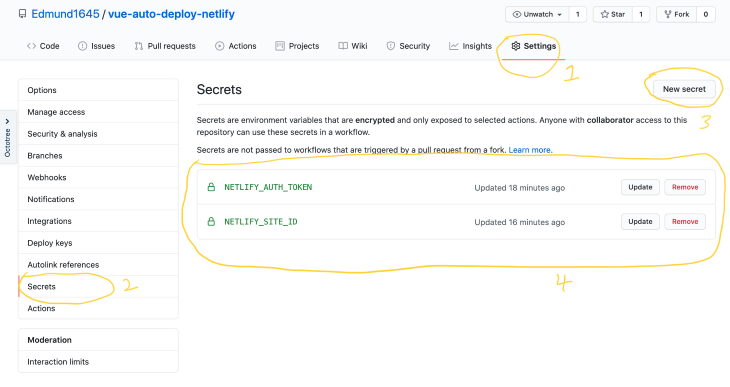 Your secrets should look like the screenshot above. You’ll also notice that the values for these secrets are never exposed and access to them is limited.

It’s time to set up GitHub Actions to build, test and deploy our Vue.js app for us.

How to use GitHub Actions

I separated the workflows because there may be situations where you want to push a commit straight to the master branch from your local machine — hot fixes and whatnot. We want to make sure we don’t break anything no mater what we do.

In your code editor, create a directory structure — like this: .github/workflows/ — in the your project’s root folder and add a file named autodeploy.yml in the /workflows folder.

Copy the snippet below and paste in the autodeploy.yml file:

In the workflow file above, we created a job build-and-test with a set of sequential steps to be followed:

Commit and push the changes to GitHub, then navigate to the Actions tab on the repository. You should see the workflow running. Once it’s done, you can check your site’s dashboard on Netlify to determine whether the deploy was published successfully.

Building this workflow is not as straightforward as the previous one because we have to consider when to automatically merge requests and when not to.

Before we get into creating the workflow file, we need to create one more secret on our repository to grant the action permission to make requests on our behalf. For this, we need a personal access token on GitHub.

In the Scopes section, select only the repo and workflow scopes.

Click the Generate token button and copy the token before leaving the page.

Add a new secret on your app’s repository named PERSONAL_TOKEN and return to your code editor.

In the /workflows folder, create a file named automerge.yml and paste the content of the snippet below:

Now that we successfully created the workflow to automatically merge pull requests, we need to set some conditions in place so everything works as intended.

Create a file named .mergepal.yml in your app’s root folder and paste the the code from the snippet below:

The file we just created is a configuration file for mergepal, a reusable action we added to our workflow. The configurations determines when and how the pull requests should be merged.

Pushing your repository to GitHub

There are just two more things to do: create new labels on GitHub and push the local repository to GitHub.

Go to the Pull requests tab on your repository and create a new table, like these:

The last step is to go back to your code editor and push the project to the GitHub repository. The autodeploy workflow should have been triggered.

To test the automerge, create a new branch with changes locally and push the branch to GitHub. Create a pull request and test set one of the newly created labels before submitting.

Here’s a screenshot of the workflow in action: 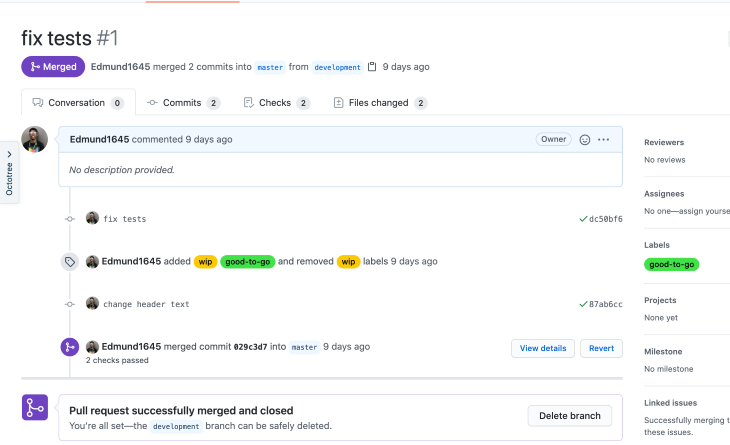