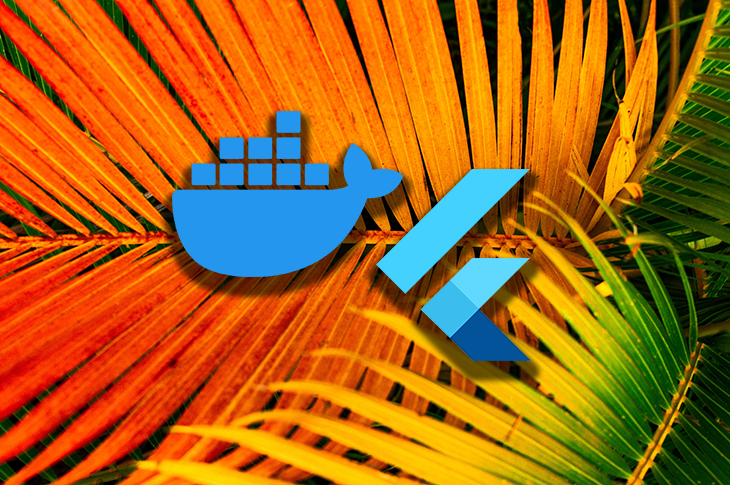 One of the hassles a lot of software engineers face revolves around deployment. An engineer could build and test an application with all dependencies on a Windows OS without errors. Still, deploying the same application to a different operating system, such as Linux or Mac, could result in bugs and errors.

Before container technologies emerged, virtual machines (VMs) were the go-to solutions for dealing with such encounters. It turns out that VMs are slow and memory inefficient, partly because they have to be set up and launched for each application.

The technique of containerizing applications complements the inefficiencies of VMs; containers are lightweight packages that enable an application to run consistently on any operating system or infrastructure.

This tutorial will dive further into what it means to containerize an application and its benefits. We will investigate this by setting up Docker on our machine and containerizing a Flutter web app.

I’ll be using Visual Studio Code for this demonstration. To efficiently run Docker on Windows, ensure that your machine:

Container technologies make it possible to run applications in distributed environments consistently. These environments can include:

There is usually no guarantee that the application is exposed to consistent runtime protocols across these environments. For instance, you may build and test an application using Flutter v2.2.3, but at the production stage, the application ends up running on Flutter v2.5.1 and, as a result, something goes wrong.

Containers ensure that an application maintains its configured runtime protocol irrespective of the operating configurations of the host server.

It achieves this by packaging an application with its dependencies, settings, libraries, and other runtime protocols in an isolated state. This implies that the application runs independently of the hosting server configurations and without any incompatibilities.

Docker is an open source tool for building, testing, deploying, and managing containerized applications. In my opinion, it is the standard for implementing application containerization due to its ease of portability and design for modern microservice architecture.

Docker simplifies the process of orchestrating containers through its docker commands.

Benefits of containerizing your app with Docker

A server hosting three applications in three virtual machines would need three copies of a virtual OS managed by the hypervisor to run on the server. This requires a lot of resources because VMs that run these three apps will be very heavy and will consume a lot of CPU resources.

With containers, the container engine manages all three applications and shares the same host OS. A single infrastructure can support a variable amount of containers.

A developer can push and pull Docker images to and from a repository. Any machine can host these images to run its containers. This implies that you can always retrieve and run a container in your Docker image from wherever you are. This process is similar to how you would typically retrieve your application hosted on a remote Git repository.

Once you build the image, Docker uses the configurations provided to sustain the application.

Scaling up an application is more manageable with containers when compared to virtual machines. Docker containers can scale up applications to withstand a heavier load. It can also reduce the processing effort when there is a drop in the weight of the load on the application.

Let us proceed to containerize a Flutter web app with Docker.

As I mentioned at the start of this article, I’ll demonstrate this process on a Windows operating system. Once you have installed Docker on your system, open the command shell as an administrator.

Run the following command to check the version of Docker installed:

You should get an output displaying the version of Docker that you installed, in this format:

Next, let us test the installation by running a basic Docker command on the terminal.

The expected output for this command is: 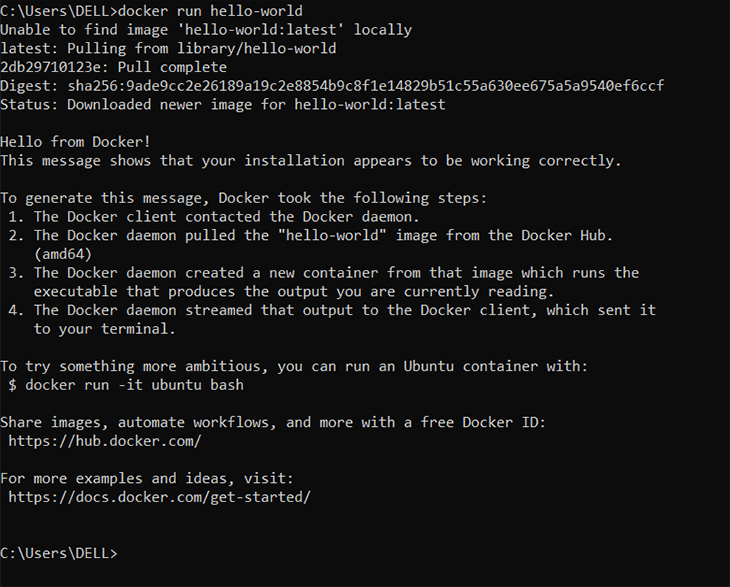 When run for the first time, the above command pulls the image from the Docker hub and runs an instance of it as a container.

If you are using a Linux operating system, you would have to grant root access to Docker to use it in your IDE. You can do this by running the following commands:

Add your user to the group:

Activate the changes made to groups:

Now, verify you can run Docker commands from the shell without using the sudo command.

Open the Flutter web application you’d like to containerize with your preferred IDE. Inside the root application folder, create a file named Dockerfile. Ensure the filename starts with uppercase “D”.

Now, add the following code inside the Dockerfile:

In the above Dockerfile, we started by installing the operating system (Ubuntu) and the required dependencies.

Next, we downloaded the Flutter SDK and set the SDK path in the environment path (this is also what you would do if you were setting up Flutter on your local machine).

Afterward, we copied our application to the container and built it with the Dockerfile.

Finally, we exposed a port=5000, through which we’ll serve the application from the container. Then we start the HTTP server using the server.sh script.

Next, create a subfolder in the root application folder. Name the folder server, then create a server.sh file inside the server folder, and add the following code.

In the server.sh file, we set the port to 5000, the same as what we exposed in the Dockerfile.

Then, we use the fuser command to terminate any other process currently running on port 5000 to make it available for our application. Finally, we start the server.

Open the terminal from the application root folder and run the following command: 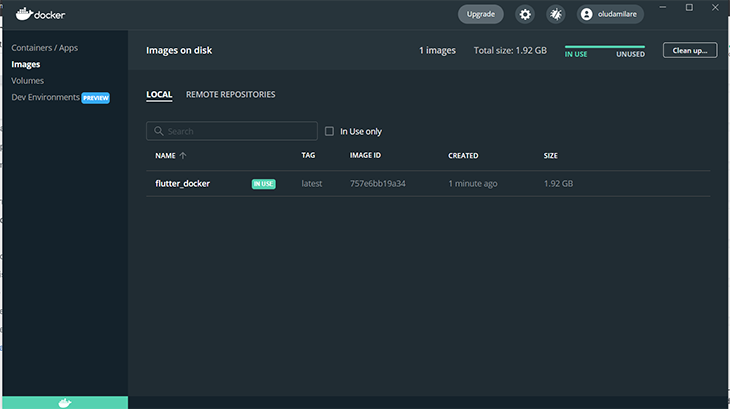 This command binds the port 5000 configured in the container to the TCP port 8080, accessible from the browser.

Your project structure should be in this format by the time you have completed the configurations: 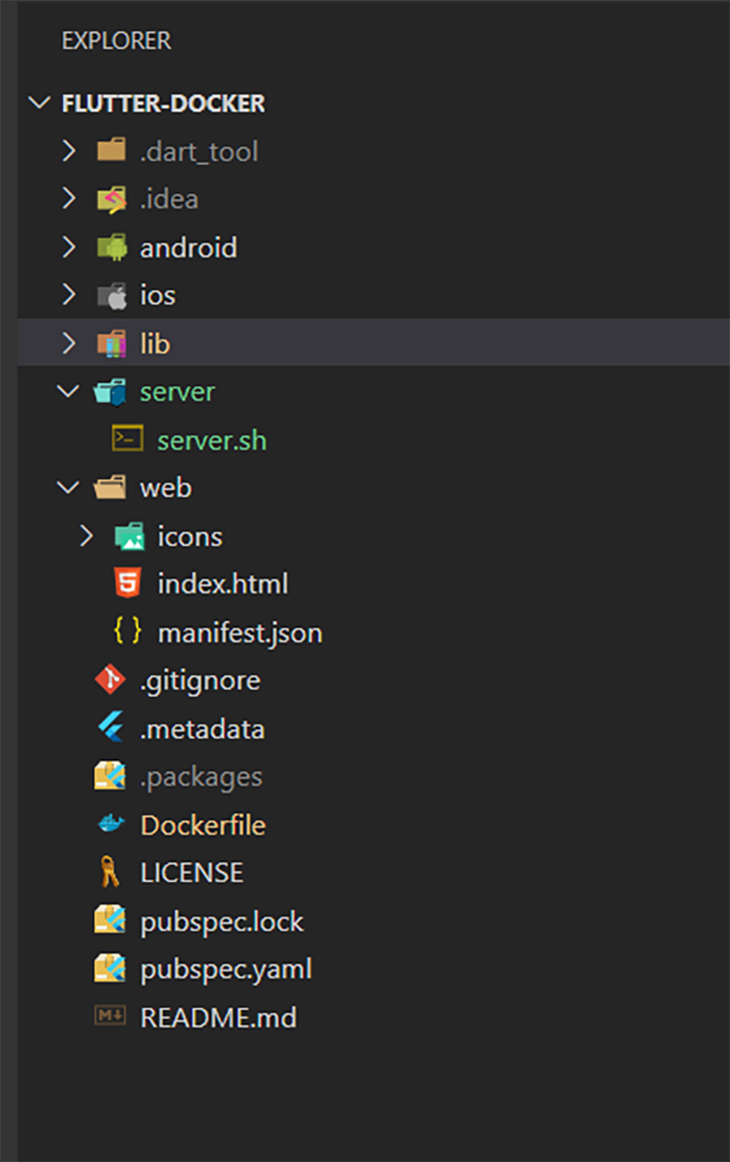 Proceed to view the application on localhost:8080 on your browser. 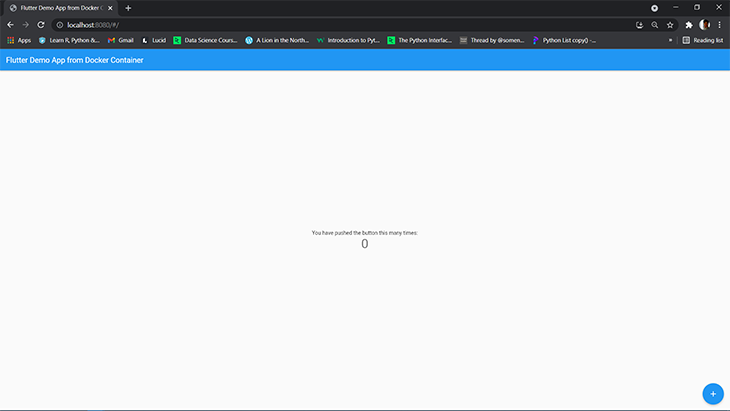 In this tutorial, we learned about the benefits of containerizing an application. We demonstrated how to set up Docker on our machine, and we proceeded to run our existing application from a Docker container.

With Docker, you don’t have to worry about your application breaking due to the incompatibilities of its host environments. You can learn more about Docker from the official documentation.

The aim is to ensure your application is flexible enough to run independently on its host. As we have demonstrated with a Flutter application, you can also containerize applications built with other tools.

Damilare Jolayemi Follow Damilare is an enthusiastic problem-solver who enjoys building whatever works on the computer. He has a knack for slapping his keyboards till something works. When he's not talking to his laptop, you'll find him hopping on road trips and sharing moments with his friends, or watching shows on Netflix.
« Commitlint: Write more organized code
How to integrate a Braintree payment system in React »

One Reply to “Containerizing Flutter web apps with Docker”