How to consume APIs with Vuex, Pinia, and Axios 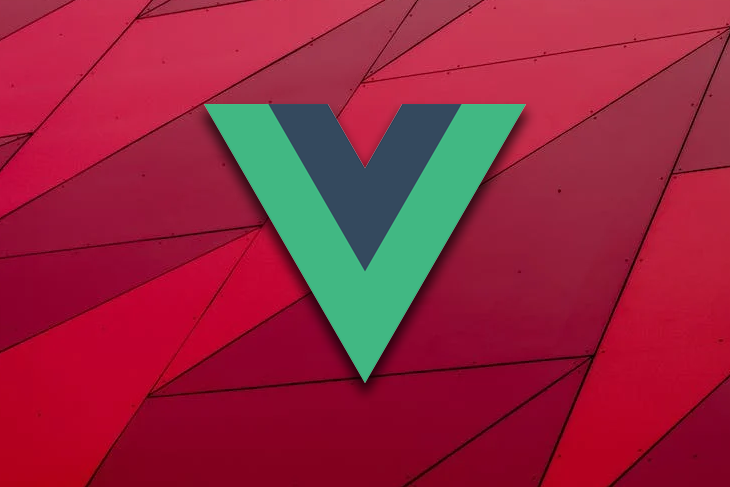 Editor’s note: This post was last updated on 2 November 2022 to add information about consuming APIs with Vuex and Axios, and to answer popular search queries about using Pinia and Vuex according to the latest version of Vuex (v5, at the time of writing).

An application programming interface (API) is a set of programming standards for accessing an application. This means that with an API, your backend and frontend applications can communicate with each other without the knowledge of the user.

“Consuming” an API means to receive requests and send responses via an API. In this article, you’ll learn how to consume APIs from a server using Vuex, Pinia, and Axios. We’ll cover the following sections:

Some frameworks, such as Angular, JQuery, and version 1.0 of Vue.js, come with built-in HTTP APIs. Since Vue 2.0, developers have decided that the built-in HTTP client module, Vue-resource, is no longer essential and can be replaced by third-party libraries. Now, the most recommended library is Axios.

Axios is a flexible HTTP client library that uses promises by default and runs on both the client and the server, which makes it appropriate for fetching data during server-side rendering. It’s easy to use with Vue.js.

State management is the implementation of a design pattern to manage data that will be shared among various components in a given application, which helps to ensure consistency across data that is being presented to the user.

In a Vue.js single-page application (SPA), multiple components may, at any given time, interact with and change the data before sending it back to the server. Therefore, developers need a way to manage these changes — “the state” — which can be done with a state management library such as Vuex or Pinia.

A state management library lets you extract shared state from components, manage it in a global singleton, and either provide components access to the state, or trigger actions, no matter where they are in the tree.

When to use a state management library

If you have never built a large-scale SPA, using a library for state management may feel too complicated and unnecessary. But if you are building a medium- to large-scale SPA, chances are you have run into situations that have made you think twice about how to better handle and share state between components. If so, Vuex or Pinia is the right tool for you!

Why you should use a state management library
Typically, you’ll want to use a library to manage state if:

Passing props can be difficult or almost impossible for deeply-nested components. It can be tempting to use direct references to parent/child instances, or try to mutate and synchronize multiple copies of the state via events. But neither of these options are recommended because they may produce unmaintainable code and bugs.

Vuex is a state management pattern and library for Vue.js applications. It serves as a centralized store for all the components in an application:

Similar to Vuex, Pinia is another state management library designed to work with the Vue framework. Some of Pinia’s underlying concepts and principles are quite similar to Vuex’s and only a few concepts differentiate these libraries, such as out-of-the-box modularity and a slight difference in syntax. With sufficient knowledge of Vuex, learning to use Pinia should be an easy switch if you’re just getting started.

In fact, Pinia is now considered Vuex 5 and is the recommended default state management library for Vue applications. This does not, however, imply that Vuex is no longer supported. Furthermore, despite being designed with the Composition API and Vue 3 in mind, Pinia is compatible with both Vue 2 and 3, regardless of whether you intend to use the Composition API or the Options API.

One of Vuex’s major drawbacks is the complexity and repetitiveness of creating actions and mutations; for example, when working on large-scale applications, you’d need to create actions that trigger mutations, which becomes a laborious and repetitive process. Pinia was inspired by this Vuex limitation, which typically eliminates mutations while also providing a more modular way for global state management.

Set up a new Vue project with Axios

For this tutorial, we’ll be working with the latest default Vue version, 3.0, and the Composition API. If you don’t have the Vue CLI installed already, run the following in your terminal:

Now, create a Vue project by running the following code in your terminal:

Next, you’ll receive a prompt to select a Vue version. Select Vue 3:

Once our app is ready, follow the commands to move into the app directory and start the server: 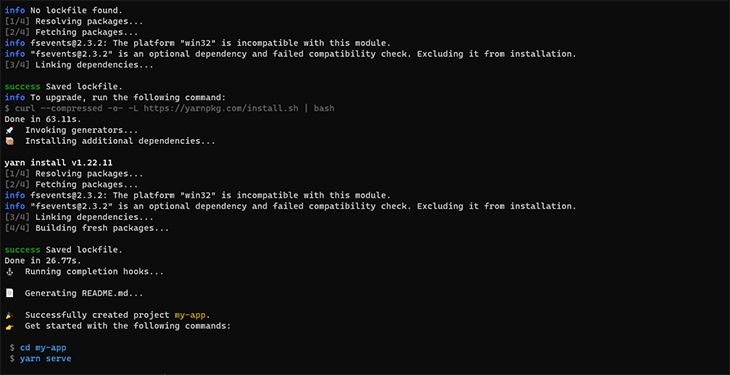 Then, you can install and set up Axios, which we’ll be using to fetch data from the API with the following code:

Install and set up a Vuex store

Install and set up Vuex with the following code:

Next, create a folder in your src folder and name it store. In your store folder, create a new index.js so that your project folder will have a structure similar to the one below:

Next, in your store/index.js file, input the following code:

Register your store by updating your main.js file to match the following:

Consuming APIs with Vuex and Axios

Before we proceed, if you’d like to learn more about actions, mutations, and getters in Vuex, I recommend checking out LogRocket’s really concise article on the subject.

To properly understand how to create a Vuex store and consume APIs with Axios using Vuex actions, state, mutations, and getters, we’ll create a simple Vuex application that fetches user information from our fake JSON backend and populates our template. To proceed, update the store/index.js file with the following code:

We’re using the async/await format to fetch data from the endpoint, and using Axios to make the HTTP request.

We’ll make a request to the API form inside of the actions object. In the try block, we then assign a data variable to our HTTP request. When a response is returned, a mutation is committed, which updates the application’s state.

We can also alert on errors or log them in the console in the catch block.

In your HelloWorld.vue file, paste the following code:

Navigate back to localhost:8080 on your browser to see the changes we’ve made: 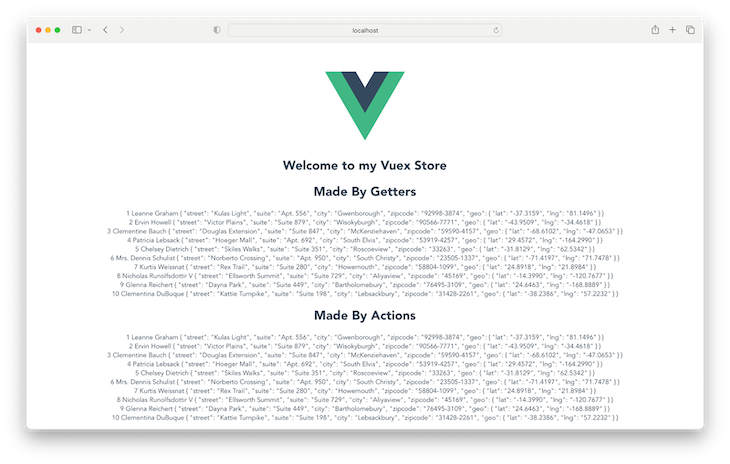 Install and set up a Pinia store

To install and setup Pinia, follow the steps below:

Next, import Pinia in the root file of your app, the main.js file, and instantiate it as such:

Next, create a stores folder in the root of the src folder and add a file named users.js.

We’ve successfully set up both our Vuex and Pinia stores! Now, let’s use our stores to fetch data from an API to populate our template.

Consuming APIs with Pinia and Axios

We’re going to replicate the output in the Vuex example using Pinia and Axios. Update the users.js file we created earlier with the following code:

Replace the code in the HelloWorld.vue file with:

In Pinia, stores are modular by default. For each created store, we need to import the store in the component it is to be used. As a result, we imported our useUserStore and assigned it to the store variable so that it can be easily accessed throughout our component.

Instead of the store.dispatch("fetchUsers") method in Vuex, in Pinia, an action is seen as a function and can be accessed from the declared store variable using the store.fetchUsers() method.

Below is the simplest Vuex store structure, where actions, getters, state, and mutations are called and exported in the index.js file.

NB: Pinia is modular out of the box, so these Vuex examples might not apply:

As your application becomes larger, you may need to separate your actions, mutations, getters, and state modules into their own, different files:

All states in our application are contained inside one large object because we’re using a single state tree. This isn’t ideal because our application grows as our actions, mutations, and state become larger, making it possible for the store to become even larger, so much so that we may not be able to keep up with it.

A great solution is to group our store into modules. Each module can contain its own state, mutations, actions, and getters — and they can even contain nested modules, providing greater options for scalability:

Pinia is considered a Vuex5 replacement and is now the recommended state management library for Vue applications. However, this does not imply that older versions of Vuex do not function properly.

Can I use Pinia and Vuex together?

You can use Vuex and Pinia in the same application; however, this is not recommended because it is best to stick to a single state management library. Using more than one may result in performance issues.

With our previous configuration, here’s how you can initialize Pinia and a Vuex store in the entry main.js file:

You can then proceed to utilizing the store in your components like we did before.

In this tutorial, we’ve looked at what state management is and why you need a library such as Vuex/Pinia to handle state for your Vue applications.

In addition, we created a simple Vue application to demonstrate Vuex/Pinia, as well as learned different store structures so you can decide which one is best for your application.

Ukpai Ugochi Follow I'm a full-stack JavaScript developer on the MEVN stack. I love to share knowledge about my transition from marine engineering to software development to encourage people who love software development and don't know where to begin. I also contribute to OSS in my free time.
« Best methods for unzipping files in Node.js
Using FastAPI inside Docker containers »

8 Replies to “How to consume APIs with Vuex, Pinia, and Axios”