Ukeje Goodness Follow I am a data analyst who writes about cryptocurrencies and decentralized ledger technologies. Find me on Twitter @Goodylili. 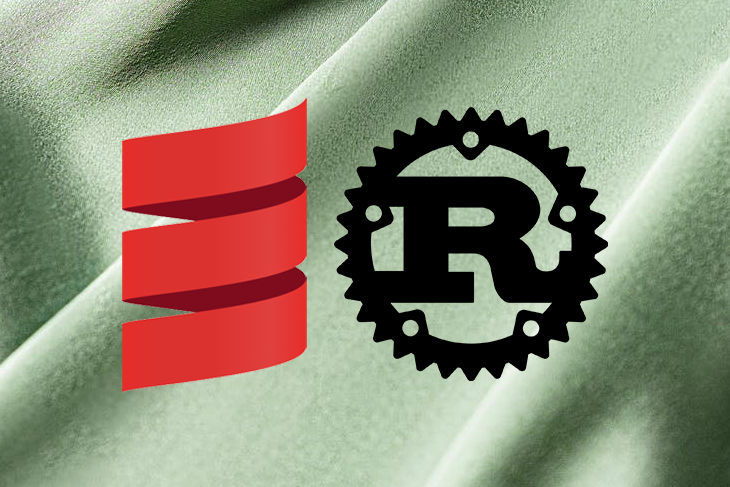 Rust and Scala are popular programming languages with wide adoption and use cases, both appreciated for their excellent support for concurrency, speed, expressivity, and scalability.

Rust and Scala were built as alternatives to powerful languages that have acquired technical debt and lack modern programming practice.

This article will compare Rust and Scala to give you insights into their use cases, why and when you should use either of them, and much more.

Rust has been the most loved programming language on the Stack Overflow developer survey since 2016, owing to its many benefits. Rust supports multiple programming paradigms, provides good expressive prowess, and has a syntax that is easy to understand and use.

Rust was designed to fix the criticisms of C++, and the language is widely used in systems programming for targeting low-resource devices. Rust is used on the frontend of web applications (via WebAssembly) to run high-performance web applications and, on the backend for fast I/0 operations, building distributable command-line applications, and networking for performance and reliability.

Rust is going mainstream, and many companies and developers are using it in their projects — here are some of the reasons why.

Rust is neither garbage compiled, nor does it allow express memory management, like C and C++ do. Rust uses an ownership model for memory management and a borrow checker for enforcing the ownership rules, which are a set of rules that the compiler checks at compile time.

The ownership model and the borrow checker ensure that Rust programs are memory-safe and efficient. Although they contribute to the steep learning curve of Rust — especially if you’re coming from a garbage-compiled language — you’ll get to appreciate the borrow checker and understand why developers love Rust as you write more code.

Rust’s fearless concurrency concept handles concurrency uniquely and helps maximize performance and minimize errors with abstractions that serve many use cases. Rust provides functionality for creating threads, communication between threads, and a shared state between threads using arcs and mutexes, all built into the standard library.

Rust is interoperable with many languages, like C and C++, through its foreign function interface (FFI). Interoperating with C requires that you wrap the exposed C API or build the code for Rust integration. C++ doesn’t have a stable application binary interface (ABI), so you’ll have to use the C ABI.

C and C++ are popular languages used in many codebases. As they get older and become unpleasant to work with due to acquired technical debts, modern programming languages need to interoperate with them for continued prosperity. Rust matches up to most features and experiences with C and C++, making it a viable option or replacement.

Rust is often compared to languages like Go, C++, and Zig in terms of performance. Performance is one reason Rust is suitable for a wide range of use cases, especially embedded systems and web applications.

According to programming language and compiler benchmarks, without parallelization, these are the benchmarks from printing helloworld and binarytrees, respectively.

Anatomy of a simple Rust program

Getting started with Rust is easy. The installation instructions and everything you’ll need to become a pro at Rust programming are provided in the Rust book.

The entry point of a Rust program is the main function, and the println! macro prints the text on a new line.

You’ll also find many Rust resources, from web development to blockchain, and many others, on the Rust section of the LogRocket blog.

Developers love Rust and, thus, use the language in many use cases. Here are a few famous use cases for Rust. 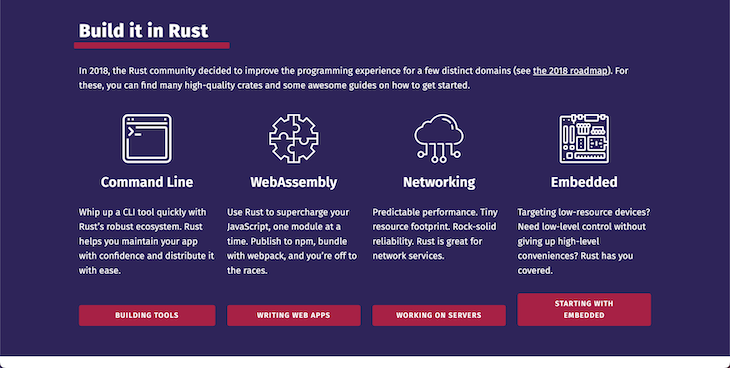 Whether it’s the frontend or backend of your web application, you can use Rust. The Rust ecosystem is home to fantastic frontend frameworks, like stdweb, for communicating with DOM APIs, Yew, backend frameworks such as Actix, Rocket, and Warp, and full-stack frameworks like Yew, Percy, and MoonZoon, partly powered by WebAssembly.

Because it is a safety-first, highly efficient language with modern programming practices, Rust is suitable for building blockchains and decentralized applications.

Rust is the primary language for building applications on Polkadot and Solana, and you’ll find Rust SDKs for building many other popular blockchains.

Rust is prevalent and slowly replacing C and C++ in embedded systems programming. Rust’s low-level expressiveness established the language as a great choice for building embedded systems, especially for IoT devices. There are even many projects in the Rust ecosystem for building on microcontrollers, including Arduino.

In many other fields, developers love to use Rust; most libraries are often easy to use and inspired by older libraries that developers are comfortable using. The Rust ecosystem is still very young, and many libraries are still developing.

Here’s an overview of the reasons developers love Rust.

It’s not all roses and bluebirds with Rust; there are some cons to consider before using.

With these cons, many developers still choose Rust as their favorite language. You’ll want to consider if any of the cons affect your reasons to use Rust, and consider tradeoffs.

Scala (scalable language) is a multi-paradigm, strong, statically typed, general-purpose programming language designed to address the fallouts of Java. Scala is concise and designed to grow based on user demand.

Scala runs on the Java Virtual Machine (JVM), meaning you can write Scala code to run anywhere. Scala also has a compiler that compiles Scala code into Java byte code for execution and an interpreter.

Scala provides features in object-oriented languages (every value is an object) and functional programming, similar to Haskell.

You can compile Scala code to Java bytecode and run it on the JVM (Java Virtual Machine), where the language has bidirectional interoperability with Java, to use existing Java libraries in Scala and Scala libraries in Java.

Developers and companies use Scala across many use cases, like machine learning, finance, full-stack web development, data processing, distributed systems, and many others.

Scala is an elegant programming language that offers a wide range of features with simplicity.

Scala is what would happen if there were a Genie that eavesdropped on every Java developer as they cursed when their build broke due to a missing semicolon, then inferred a wish from their complaints – Knewton.

Here are a few excellent features of Scala that make the language desirable to work with.

The multi-paradigm nature of Scala is one of the selling points of the language, also making it suitable for academic purposes and a more comprehensive range of use cases.

Scala is one of the most interoperable languages. Scala is interoperable with Java, JavaScript, and the dotNet framework. Also, you can run Scala on LLVM (beta at the moment).

Interoperability enables Scala developers to use Scala programs for many use cases without having to use or learn new languages.

Anatomy of a simple Scala program

Every Scala program starts with the main method, the object, and an expression.

The array is the list of command-line arguments you can use based on your operation, and the println method prints the data argument in a new line.

Scala shines the most when the subject is big data processing because it provides functional programming. Big data solutions like Apache Spark, Kafka, and Flink are written in Scala because Scala provides functionalities for working with large data sets.

You can build full-stack web applications with Scala. There are frontend web and backend frameworks, and because Scala is interoperable with JavaScript, it’s easier to build web applications in Scala.

You can use JavaScript everywhere

Scala programs are interoperable with Java, so you can use Scala instead of Java to keep the features you love about Scala, and make your programs easier to build and maintain.

There are so many reasons you’ll love Scala. Here are a few of the reasons Scala is famous:

You’ll hardly find developers writing Scala code for a language as aesthetic as Scala. Here’s why:

Nonetheless, Scala has found applications in high-end technologies, and many companies are investing in using the language as part of their infrastructure.

Scala and Rust share many similarities, and you can use both languages for some of the same use cases without compromising essential features. While Scala has found its most popular application in big data, data processing, and stream processing, Rust has found its buzz in more performant applications like game development, blockchain development, and embedded systems programming.

You’ll want to use the right tools for the right job, so you won’t want to use Scala where Rust shines, and vice versa. Your choice should be based on the use case, expressivity, developer community support, and the libraries that suit your use case.

You can comfortably use either language for web development because their ecosystem is home to many powerful web frameworks.

According to the Stack Overflow developer survey, Scala and Rust are in the top ten most paid-for programming languages, proving that the languages are highly valued and in demand.

My advice is to choose Scala if you’ve worked with a JVM-based language before, especially Java, to get the most out of Scala and persist through the learning and mastery process.

You can choose Rust if you’re an explorer and want to try out a new language with prospects. The Rust train is only just getting started, more developers are getting on board, and the community is expanding the ecosystem of crates and libraries for a smoother Rust experience across more fields.

This article taught you about Scala and Rust, their features, use cases, pros and cons, and gave you a comparison between the two languages for your next project.

Rust and Scala are excellent programming languages — whichever you choose, you’re bound to have a worthwhile experience.

Ukeje Goodness Follow I am a data analyst who writes about cryptocurrencies and decentralized ledger technologies. Find me on Twitter @Goodylili.
« Understanding Redux: A tutorial with examples
How to configure indexes in Prisma »