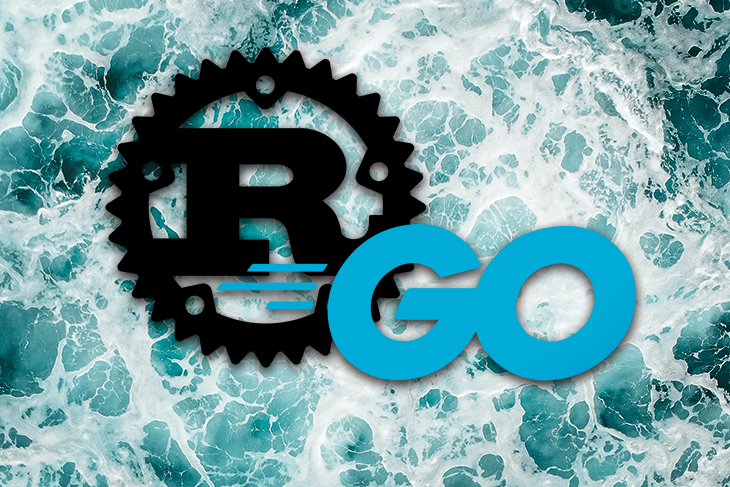 Editor’s note: This article was updated on 1 June 2022 to reflect more up-to-date information about Rust and Go.

Right off the bat, there are clear differences between Go and Rust. Go has a stronger focus on building web APIs and small services that can scale endlessly, especially with the power of Goroutines. The latter is also possible with Rust, but things are much harder from a developer experience point of view.

Rust works well for processing large amounts of data and other CPU-intensive operations, such as executing algorithms. This is Rust’s biggest edge over Go; projects that demand high performance are generally better suited for Rust.

In this tutorial, we’ll compare and contrast Go and Rust, evaluating each programming language for performance, concurrency, memory management, and the overall developer experience. We’ll also present an overview of these elements to help you pick the right language for your project at a glance.

If you’re just starting out with Rust, it might be a good idea to brush up on this beginner’s guide before you read any further.

If you’re all caught up, let’s dive in!

Originally designed by Google’s engineers, Go was introduced to the public in 2009. It was created to offer an alternative to C++ that was easier to learn and code and was optimized to run on multicore CPUs.

Since then, Go has been great for developers who want to take advantage of the concurrency the language offers. The language provides Goroutines that enable you to run functions as subprocesses.

A big advantage of Go is how easily you can use Goroutines. Simply adding the go syntax to a function makes it run as a subprocess. Go’s concurrency model allows you to deploy workloads across multiple CPU cores, making it a very efficient language:

Rust was designed from the beginning to be high-performance – in fact, it’s the first answer to “Why Rust?” on the Rust website! The way Rust handles memory management means that it doesn’t need a garbage collector, unlike Go, and the use of references let objects easily get passed around without requiring copies to be made.

Individual benchmarks can be game-able and also tricky to interpret. The Benchmarks Game deals with this by allowing multiple programs for each language, and compares how long they take to run as well as memory usage and code complexity to get a better sense for what the tradeoffs are between languages.

Here are a few examples for the most optimized Rust and Go code:

Both languages are good at scaling up to take advantage of many CPUs to process data in parallel. In Go, you can use a Goroutine to process each piece of data and use a WaitGroup to wait for them all to finish. In Rust, rayon is a very handy crate that makes it easy to iterate over a container in parallel.

As mentioned above, Go supports concurrency. For example, let’s say you’re running a web server that handles API requests. You can use Go’s Goroutines to run each request as a subprocess, maximizing efficiency by offloading tasks to all available CPU cores.

Goroutines are part of Go’s built-in functions, while Rust has only received native async/await syntax to support concurrency. As such, the developer experience edge goes to Go when it comes to concurrency. However, Rust is much better at guaranteeing memory safety.

Here’s an example of simplified threads for Rust:

Concurrency has always been a thorny problem for developers. It’s not an easy task to guarantee memory-safe concurrency without compromising the developer experience. However, this extreme security focus led to the creation of provably correct concurrency.

A channel helps transfer a message from one thread to another. While this concept also exists for Go, Rust allows you to transfer a pointer from one thread to another to avoid racing conditions for resources. Through passing pointers, Rust can enforce thread isolation for channels. Again, Rust displays its obsession with memory safety in regards to its concurrency model.

Data is only accessible when the lock is held. Rust relies on the principle of locking data instead of cod, which is often found in programming languages such as Java.

For more details on the concept of ownership and all concurrency paradigms, check out “Fearless Concurrency with Rust.”

The earlier concept of ownership is one of Rust’s main selling points. Rust takes type safety, which is also important for enabling memory-safe concurrency, to the next level.

According to the Bitbucket blog, “Rust’s very strict and pedantic compiler checks every variable you use and every memory address you reference. It avoids possible data race conditions and informs you about undefined behavior.”

This means you won’t end up with a buffer overflow or a race condition due to Rust’s extreme obsession with memory safety. However, this also has its disadvantages. For example, you have to be hyperaware of memory allocation principles while writing code. It’s not easy to always have your memory safety guard up.

First of all, let’s look at the learning curve associated with each language. Go was designed with simplicity in mind. Developers often refer to it as a “boring” language, which is to say that its limited set of built-in features makes Go easy to adopt.

Furthermore, Go offers an easier alternative to C++, hiding aspects such as memory safety and memory allocation. Rust takes another approach, forcing you to think about concepts such as memory safety. The concept of ownership and the ability to pass pointers makes Rust a less attractive option to learn. When you’re constantly thinking about memory safety, you’re less productive and your code is bound to be more complex.

The learning curve for Rust is pretty steep compared to Go. It’s worth mentioning, however, that Go has a steeper learning curve than more dynamic languages such as Python and JavaScript.

For modern software developers, being able to iterate quickly is very important, and so is being able to have multiple people working on the same project. Go and Rust achieve these goals in somewhat different ways.

The Go language is very simple to write and understand, which makes it easy for developers to understand each other’s code and extend it. However, in Go code you have to be very careful about error-checking and avoiding nil accesses; the compiler doesn’t provide a lot of help here, and so implicitly understanding which variables might be nil and which ones are guaranteed to be non-nil.

Rust code is trickier to write and make compile; developers have to have a good understanding about references and lifetimes and such to be successful. However, the Rust compiler does an excellent job of catching these issues. (and emitting incredibly helpful error messages – in a recent survey 90 percent of Rust developers approved of them!) So while “Once your code compiles, it’s correct!” isn’t true for either language, it’s closer to true for Rust, and this gives other developers more confidence in iterating on existing code.

Both languages have a solid assortment of features. As we’ve seen above, Go has built-in support for a number of useful concurrency mechanisms, chiefly Goroutines and channels. The language supports interfaces and, as of Go v1.18 which was released in March 2022, generics. However, Go does not support inheritance, method or operator overloading, or assertions. Because Go was developed at Google, it’s no surprise that Go has very good support for HTTP and other web APIs, and there’s also a large ecosystem of Go packages.

The Rust language is a bit more feature full than Go’s; it supports traits (a more sophisticated version of interfaces), generics, macros, and rich built-in types for nullable types and errors, as well as the ? operator for easy error handling. It’s also easier to call C/C++ code from Rust than it is from Go. Rust also has a large ecosystem of crates.

When to use Go

Go works well for a wide variety of use cases, making it a great alternative to Node.js for creating web APIs. As noted by Loris Cro, “Go’s concurrency model is a good fit for server-side applications that must handle multiple independent requests”. This is exactly why Go provides Goroutines.

What’s more, Go has built-in support for the HTTP web protocol. You can quickly design a small API using the built-in HTTP support and run it as a microservice. Therefore, Go fits well with the microservices architecture and serves the needs of API developers.

In short, Go is a good fit if you value development speed and prefer syntax simplicity over performance. On top of that, Go offers better code readability, which is an important criterion for large development teams.

Rust is a great choice when performance matters, such as when you’re processing large amounts of data. Furthermore, Rust gives you fine-grained control over how threads behave and how resources are shared between threads.

On the other hand, Rust comes with a steep learning curve and slows down development speed due to the extra complexity of memory safety. This is not necessarily a disadvantage; Rust also guarantees that you won’t encounter memory safety bugs as the compiler checks each and every data pointer. For complex systems, this assurance can come in handy.

Go vs. Rust: My honest take

Let’s start by highlighting the similarities. Both Go and Rust are open-source and designed to support the microservices architecture and parallel computing environments. Both optimize the utilization of available CPU cores through concurrency.

But at the end of the day, which language is best?

There many ways to approach this question. I’d recommend thinking about what type of application you want to build. Go serves well for creating web applications and APIs that take advantage of its built-in concurrency features while supporting the microservices architecture.

You can also use Rust to develop a web API, but it wasn’t designed with this use case in mind. Rust’s focus on memory-safety increases complexity and development time, especially for a fairly simple web API. However, the larger amount of control you have over your code allows you to write more optimized, memory-efficient, and performant code.

To put it as simply as possible, the Go versus Rust debate is really a question of simplicity versus security.