Switching from Rust to TypeScript (and vice versa) 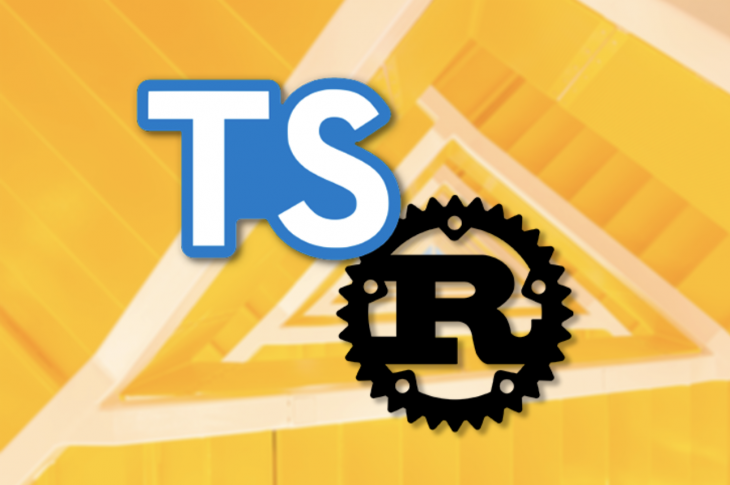 It’s very common for developers to switch from one programming language to another. For instance, you might convert a JavaScript application to TypeScript to take advantage of the latter’s code maintainability and reusability benefits.

In this tutorial, we’ll show you how to transition from writing apps in Rust to TypeScript and vice versa. We’ll explore how these languages are similar, how they differ, and common challenges associated with each. We’ll then discuss the benefits of adopting TypeScript in Rust as well as best practices for how to do so.

After adding the dependency in your cargo.toml file, run your project.

Next, install your dependencies. You can use a package manager such as npm. The dependency you installed will appear in your package.json file.

Data types in Rust and TypeScript

Rust and TypeScript are both statically typed languages. This means the compiler tries to infer the data type during compilation.

Let’s look at the Rust example below:

While TypeScript is statically typed, it doesn’t actually enforce that you’re accessing the right data type at compile time.

The program above throws an error at compile time: expected `i32`, found floating-point number. However, the same code is executed in runtime. This act can cause more problems and may result in an exception.

To avoid that, the program below uses a TypeScript library runtypes. It not only gives a warning at compile time, it enforces data type checking whenever you’re accessing a different type from what you assigned.

Rust, as a statically typed programming language, allows exceptions to be caught in time. For data types, the compiler can infer the data type of the value you assigned.

This method helps to capture errors at compile time, before runtime. That way, you don’t use exceptions for flow control, which impacts the performance of your code. You can know confidently that you program won’t throw an error at runtime once it compiles successfully.

The way Rust handles errors ensures there are no exceptions. For errors that are recoverable, there’s a Result<T, E> type. When errors are not recoverable, a panic! macro stops the execution of the program at compile time.

Here’s an example of how TypeScript handles exceptions with a try, catch statement.

The problem with the try, catch method is that it handles runtime errors exclusively. Therefore, the compiler can’t tell you when there’s an error in your try, catch block. Furthermore, you can’t use try, catch in asynchronous codes because it will finish executing before the asynchronous code finishes its execution. TypeScript’s type-safe error handling with type Type<T> handles exceptions more capably.

Writing conditional statements in TypeScript can quickly become ambiguous. To solve this problem, most developers use the switch case statement in TypeScript. However, this also becomes verbose over time.

The example above shows how verbose TypeScript can become when you’re writing conditional statements in nested ADTs. That’s because each level of nesting requires a switch statement.

The same example can be rewritten in Rust, as shown below:

Any in Typescript and Unsafe In Rust

TypeScript’s Any type and Rust’s unsafe share a lot of similarities. They are mostly used for unlocking additional features. For instance, Rust’s unsafe enables you to dereference a raw pointer, access an unsafe function, and so on.

With the any type in TypeScript, you can access properties without restrictions, even ones that don’t exist. For example, developers can access functions and TypeScript won’t check their type:

From the Rust example, we just assessed an unsafe function. With this program, Rust doesn’t enforce memory safety and allocates on the heap. Variables from TypeScript’s any type are also stored in the heap since the variable type can change in the course of execution.

A mutable object or variable can be changed during the course of execution even after assigning a value. In Rust, variables are immutable by default because the compiler wants to make sure you don’t assign values to a variable more than once.

You don’t have to keep track of where a value might change. When you run the program below, the compiler throws an error:

Typescript is not designed for variable immutability. However, if you use the keyword const to assign values to variables, you can’t assign them to another value:

The program above will throw an error at runtime when it gets to a = 6;. That’s because it realizes that a is a constant and another value shouldn’t be assigned to it.

There are times when mutability is beneficial or even necessary. You can mutate variables in Rust by adding mut in front of the variable. Let’s look at the first example we treated:

The program above runs without error because we added mut to the variable. In TypeScript, you can mutate variables of type let and var, as shown in the example below:

Rust has the const keyword. However, you can only set the variable value at compile time alone, not at runtime.

Because let can be set at compile time and const can’t, the code throws an error at compile time. Although Rust variables are immutable by default, you can redefine or shadow variables of type let:

In TypeScript, you can only shadow or redefine variables of type var by default:

Objects are a very important part of TypeScript. You can think of an object as a person that has different characteristics, called properties. You want to be able to link and access those characteristics of the person as if they’re linked together:

However, in Rust, you don’t create objects themselves. You create an instance with a struct type. Structures are called structs in Rust. Structs put related properties into one data type.

Let’s recreate the object sample from our TypeScript object with a struct:

You can build objects from other objects in TypeScript, as shown in the example below:

Structs, too, can be built from other structs:

One reason why developers love Rust is its memory management capabilities. In Rust, you don’t have to worry about how the garbage collector cleans up the memory that’s no longer required from the heap. All you need to do is request for memory from the memory allocator. Rust automatically returns this memory to the allocator when you’re done.

In the example above, we requested memory from the memory allocator. Since we don’t know the size of the string (it can be changed in the program mut), it’s sent to the heap instead of the stack.

Immediately, the scope is over. Rust returns the memory s was occupying back to the heap. We don’t need to write programs to clean up or return memory back to the heap when we are done with them.

TypeScript uses a garbage collector, which manages memory from the heap. Just like in Rust, it does this automatically.

Let’s look at the example below from Mozilla:

The memory is not released back to the heap at the end of the scope because a property of the variable is still in use.

Portability and stability are two common reasons to switch from one programming language to another. What about a language that supports multiple operating systems and architecture?

Although TypeScript doesn’t offer as much portability as Rust, it can be run on virtually any OS you can think of. You don’t need to install any runtime environment to execute TypeScript code.

Rust vs. TypeScript: Why you should switch

The most common reason for switching to Rust is its guaranteed memory safety. Developers who choose TypeScript usually value its intuitiveness and type safety in JavaScript.

Switching your application from one programming language to another can be stressful and complicated. You may wonder whether it’s better to just leave the application stack the way it is. No one wants to be a latecomer in their field; as the frontend and web development ecosystems evolve, it’s critical to find your place in it. Learning to write the same types of apps and perform the same functions in multiple programming languages can help you become a more well-rounded developer.

In this article, we demonstrated how to switch from TypeScript to Rust and vice versa. We also walked through some challenges you’re likely to encounter when making this change and explored the many similarities between TypeScript and Rust.

Ukpai Ugochi Follow I'm a full-stack JavaScript developer on the MEVN stack. I love to share knowledge about my transition from marine engineering to software development to encourage people who love software development and don't know where to begin. I also contribute to OSS in my free time.
« Creative text styling with the CSS mix-blend-mode property
The top JavaScript data visualization libraries for 2021 »

3 Replies to “Switching from Rust to TypeScript (and vice versa)”