An SEO approach to async components with loadable-components 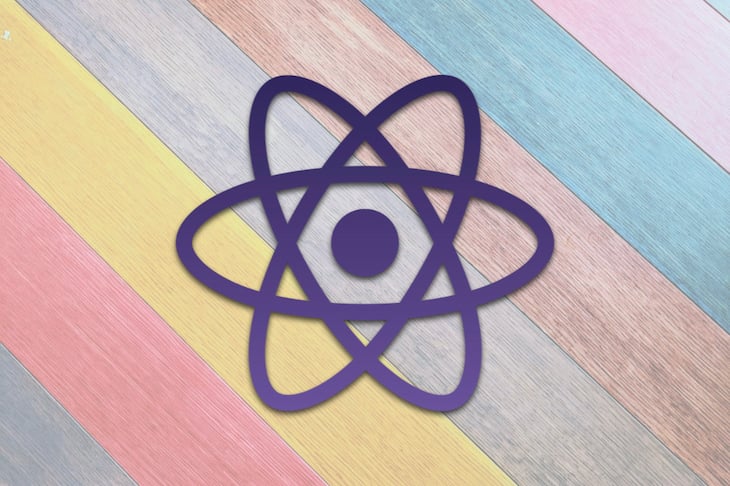 Have you ever viewed the page source for a web page while loading components asynchronously? If you have, there’s a possibility you may have noticed the actual content is not being rendered.

This is because the components are being loaded asynchronously and on the client side, which can be bad for SEO because crawlers will be unable to get the actual content when indexing the site.

This article will provide a method with which you can get the best of both worlds by using loadable-components to asynchronously load components.

We’ll be working with an existing Gatsby project in this article. The project already uses the loadable component, and we’ll see how to implement it better for SEO purposes.

However, we’d also like to be able to display other things apart from blog posts on the site. To that end, we created a new content type in Contentful: custom blocks . A custom block, as the name suggests, would allow us to render custom blocks (content that is not necessarily a blog post) on the website.

The custom blocks can then be used in a code snippet like the one below, where the CustomBlockComponent is only returned if there’s a corresponding match with customBlock.name.

With this current implementation, we’re loading all the custom blocks and their components all at once, even though we don’t need them. Right now, it’s just two custom blocks, but imagine if it were a whole lot more than that.

All the custom blocks are being loaded asynchronously, so they’ll only be loaded when needed, which in turn results in the code being optimized for performance.

This is the reason why we have chosen to use loadable-components in our project, and it seems to solve the problem we initially had. However, importing the components with loadable means the content of the custom block will not be pre-rendered into the static HTML.

As an example, in the page source below, I’m expecting the Date One text to be in the source, but it’s not. The Date One text is inside one of the custom block files above, and it needs some JavaScript to be evaluated, hence, it’s not showing up. 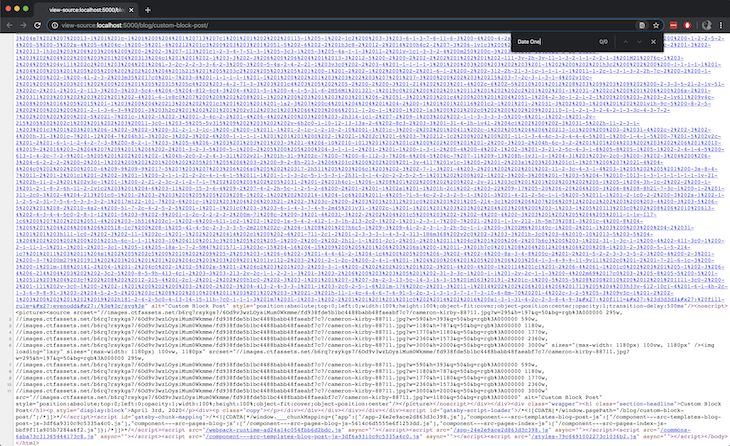 This is what we’ll try to solve in this article: how to load the components asynchronously and also make sure that content gets rendered in the static HTML.

The next thing is to add a custom Babel plugin to the project. To do that, we’ll need to modify the .babelrc.js file. In the plugins array, add the line below:

Next, we’ll add a custom webpack plugin to the gatsby-node.js file.

The final step in all of this is making sure that the content of the custom block is pre-rendered with the static HTML. One way to do that is by using the fallback prop of loadable/components.

The fallback prop determines what to show while the component is being loaded asynchronously. This is what will be used to make sure asynchronous components get rendered to the static HTML. How?

So, for asynchronous components, the following happens:

We can then take advantage of step two to get and save the current static HTML and then use that as a fallback. That’s exactly what’s being done in the code snippet below. If you recall above, the CustomBlock.js file simply checks whether a custom block component exists and then returns it.

Now it’s doing a whole more than that:

It’s a bit of a hack, but then we get to see the content of the asynchronous components in the page source, and that’s good for SEO.

Now we can build the site and run it in production with the commands below:

The dates are now coming up in the page source, which means the custom block elements are now being pre-rendered which in turn means crawlers can successfully crawl this page. 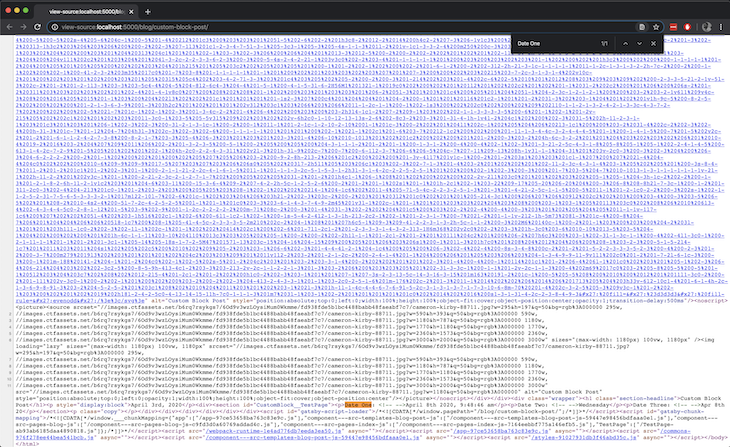 To simulate what I’ve explained in this article, there’s a GitHub repository that contains the codebase for the Gatsby project above. It also contains an exported Contentful space so you can set that up (by importing into a new space) and connect to the Gatsby project.