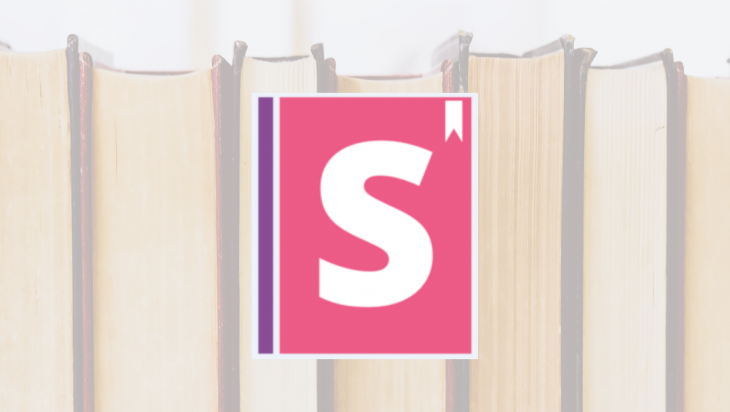 Every developer wants to build software that works. We can make sure our software’s code works flawlessly by isolating it and showing its behavior in a series of tests. The same can’t be said for our components as they are tested within the context of our app.

Storybook lets you view and interact with your components in an isolated manner. It’s just like unit testing but for UI components. In the words of Storybook’s documentation:

In this post, we will find out how Storybook can help us create UI components and improve our component testing.

Listen to our podcast episode about component-driven development here.

Getting started with Storybook

Let’s start with bootstrapping a new React project and in it, we’ll install Storybook via CLI:

When running yarn storybook, you should see Storybook’s testing page on the local address http://localhost:9009/: 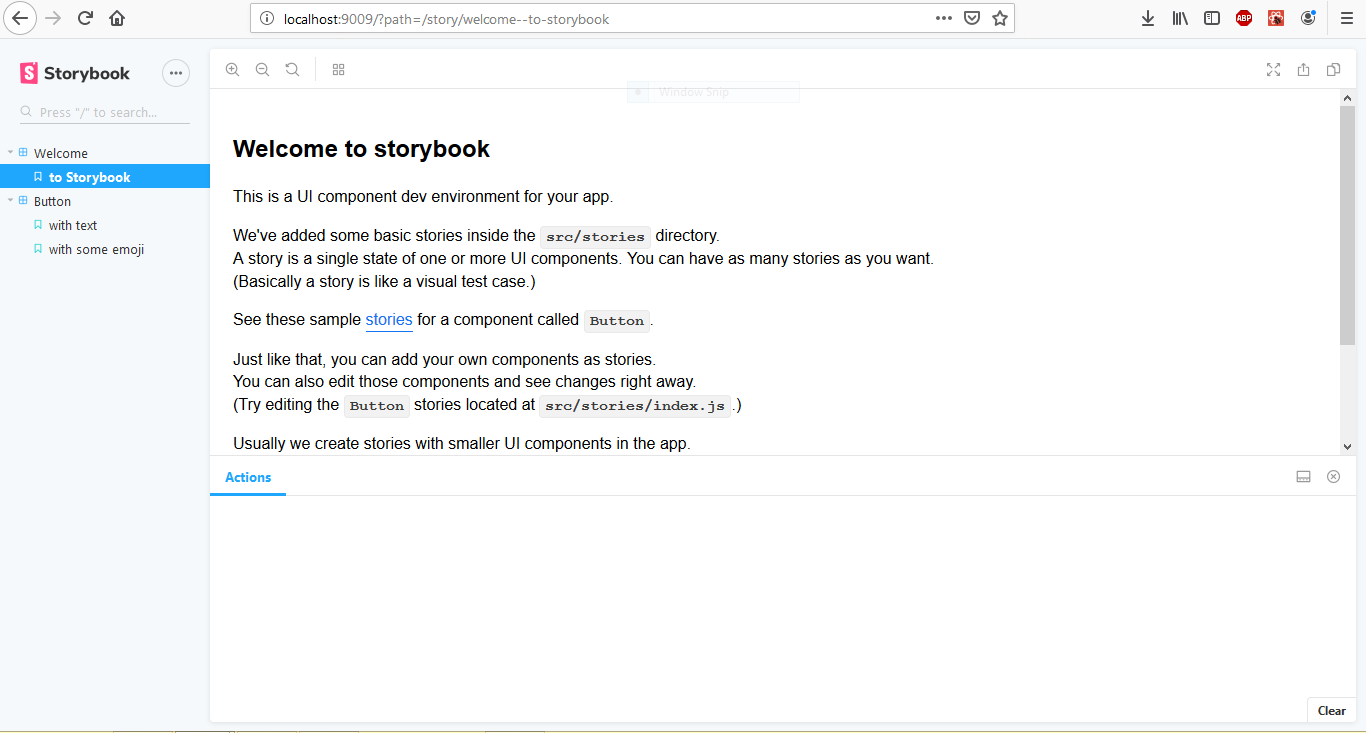 For the purpose of testing, we’ll create a basic component – a button called CoffeeButton. It displays the number of cups of coffee to be served.

Storybook works by using “stories”. A story is a function that contains the single state of one component and renders that component to the screen for testing purposes. Let’s write a story for our CoffeeButton component. In src/stories create a file and name it CoffeeButtonStory.js:

Here’s how our component looks in Storybook:

Storybook offers different techniques for testing UI components. Components need to undergo tests for a variety of reasons some of which are:

Let’s go on to examine some of the ways Storybook can make component testing seamless.

react-test-renderer renders React components to pure JavaScript objects without depending on the DOM. This makes it possible to grab the screenshot of the DOM tree rendered by a React DOM.

After installing, let’s create a test file storyshots.test.js, in it we’ll initialize storyshots:

To test a component we run npm test. What this does is generate a snapshot where you can inspect the component’s output. Every time you run a test, a snapshot is automatically generated and compared with snapshots generated from previous tests. If storyshots spots any differences, the test will fail. Below is a snapshot generated on testing for the first time: 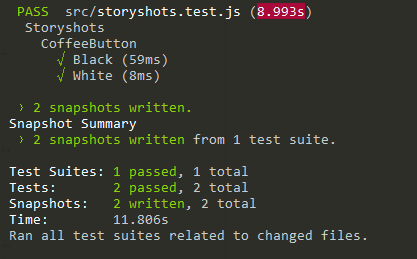 Our tests were successful, now let’s try to change something in our CoffeeButton component. Change line 16 of CoffeeButton.js to:

On running tests we get the following errors: 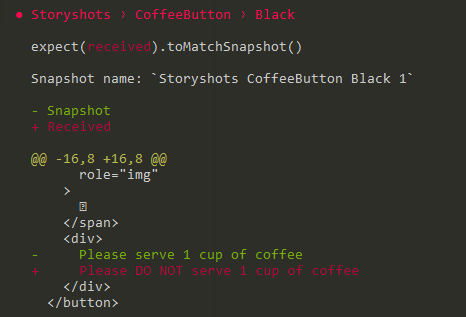 Automated visual testing involves automatically verifying that our UI visually appears as intended. This is useful in cross-browser testing as it can detect lapses that escaped the observations of developers. Storybook tests UI visually via an add-on called storyshot-puppeteer . Same as storyshots, this add-on works by comparing screenshots – only this time it takes screenshots of the browser and not code. To install storyshot-puppeteer run:

Once installed, to make it compare UI and not code we’ll need to override the test comparison with imageSnapshot from the puppeteer add-on. We can do this by editing the initStoryshots function we created when carrying our structural testing. We’ll also need to specify the URL where our storybook will be running:

Below is a snapshot generated when we test our images for the first time: 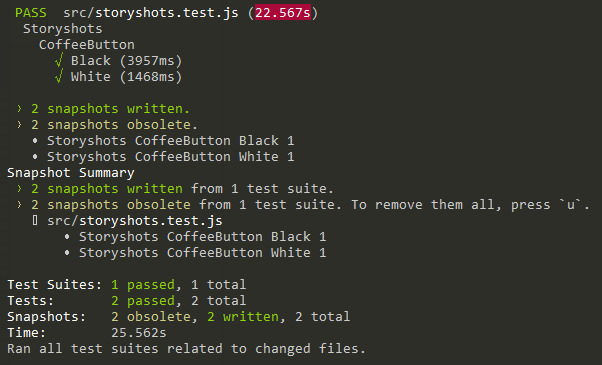 Should we change any UI property in our component, our tests will fail and puppeteer will return the difference in the form of snapshots. Let’s change a part of our UI. In line 3 of CoffeeButton.js, change the background color from lightgrey to lightblue:

Now when we run the tests:

Below is a generated snapshot of the difference noticed by puppeteer in our UI:

With Interaction testing, Storybook lets you display tests and their results alongside your stories in the DOM. It does this via an addon – react-storybook-specifications. To install this addon, run:

Then add this line to your addons.js file:

react-storybook-specifications does not work alone, we still need to install the following:

To install these add-ons, run:

In our config.js file, we’ll import configure and Adapter from enzyme and enzyme-adapter-react-16. Notice that we’ll be having two instances of configure now so we’ll need to specify both like this:

Let’s see how this works by testing part of CoffeeButton component. In CoffeeButtonStory.js, input the following block of code:

Now save and run the app. In our browser, we should see this:

Let’s alter our tests expectations. Change line 20 of CoffeeButtonStory.js to:

Now when we run the app and check out our browser, this is what we get:

As can be seen, changing our expected output will render an error to the DOM. Interaction testing via storybook-addon-specifications enables us to have a living documentation, where we can interact with our components and their test results side by side.

Storybook provides a great way to test our UI components. It may seem like we are doing away with unit testing but that’s not the case. Unit testing aims at finding out what went wrong with code. In this case, we’re testing React components and if something went wrong with our UI we would still ask questions about what markup we have to fix.

This implies that integration and snapshot tests are as good as unit tests – in this context. Should you want to play around with code, you can always check out the source code here on Github.

Raphael Ugwu Follow Writer, software engineer, and a lifelong student.
« The 7 best JavaScript date libraries
React Native vs. Ionic: Which one is right for you? »

One Reply to “How React Storybook can simplify component testing”