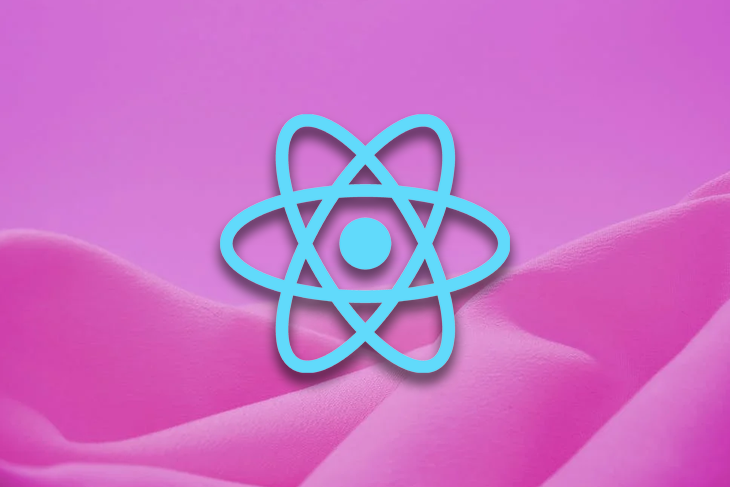 Mobile apps are made up of multiple screens. When building mobile apps, a primary concern is how to handle a user’s navigation through the app — e.g., the presentation of the screens and the transitions between them.

What is React Navigation?

React Navigation is a standalone library that enables you to implement navigation functionality in a React Native application.

React Navigation is written in JavaScript and does not directly use the native navigation APIs on iOS and Android. Rather, it recreates some subset of those APIs. This allows for integration of third-party JS plugins, maximum customization, and easier debugging, with no need to learn Objective-C, Swift, Java, Kotlin, etc.

The most stable version of React Navigation at the time of writing is React Navigation 6.0, released in August 2021. According to their release post, the latest edition is focused on flexibility and ease of use. However, the team also stated that the latest release brings in very few breaking changes this time.

Some of the new features included in React Navigation 6.0 include:

What is React Native Navigation?

React Router Native is another solution for implementing navigation functionality in a React Native app. It is developed by the Remix team, which is best known for its modern web framework.

React Router Native shares most of its API code with the React Router framework. This means that web developers who have worked with React Router will find it easy to jump into using its Native counterpart.

In terms of ease of use, both React Navigation and React Router Native are identical. For example, look at the following Router Native code:

When compared to Navigation, we can see that the code is similar:

The code used to implement routing in both libraries are identical to each other. This is a major plus point, since this means that there is a minor learning curve in both frameworks.

If you’re coming from a web development background, I would recommend React Router Native because its usage is the same as that of React Router. Otherwise, React Navigation should be the way to go because it has a larger community, which offers more development support.

Assuming you have Yarn installed, the first step is to set up a React Native app. The easiest way to get started with React Native is with Expo tools because they allow you to start a project without installing and configuring Xcode or Android Studio.

This will kickstart the downloading process and configure the project:

Next, cd into the project folder and open your code editor:

If you are using VS Code, you can open the current folder in the editor using:

Start the app with:

The next step is to install the react-navigation library in your React Native project:

React Navigation is built with JavaScript and lets you create components and navigation patterns that look and feel like truly native ones.

React Navigation uses what’s called a stack navigator to manage the navigation history and presentation of the appropriate screen based on the route taken by a user inside the app. Only one screen is presented to a user at a given time.

Imagine a stack of paper; navigating to a new screen places it on top of the stack, and navigating back removes it from the stack. The stack navigator also provides the transitions and gestures that feel like those of native iOS and Android. Note that an app can have more than one stack navigator.

In this section, we’ll explore some examples of React Native navigation patterns and how to achieve them using the React Navigation library.

Let’s begin by first creating a /components folder in the root of our project. Then we create two files, Homescreen.js and Aboutscreen:

Note the onPress prop of the button above — we’ll explain what it does later. 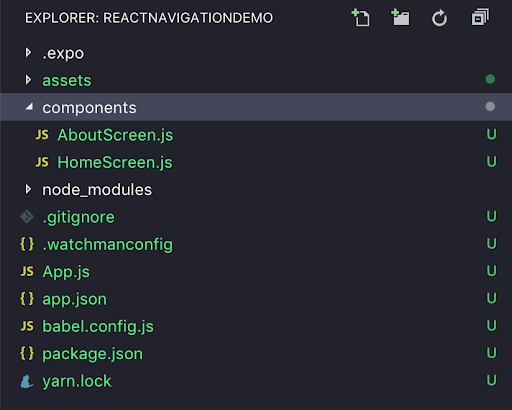 Let’s also make some changes to App.js. Here, we’ll have to make the following imports:

It is useful to implement our navigation in the root App.js file because the component exported from App.js is the entry point (or root component) for a React Native app, and every other component is a descendant.

As you will see, we will encapsulate every other component inside the navigation functions:

In the code above, createNativeStackNavigator provides a way for our app to transition between screens, where each new screen is placed on top of a stack. It is configured to have the familiar iOS and Android look and feel: new screens slide in from the right on iOS and fade in from the bottom on Android.

Here, we’ve executed the createNativeStackNavigator function and stored its instance into the Stack variable.

The createStackNavigator function passes behind the scenes, a navigate prop to the HomeScreen and AboutScreen components. This prop allows for navigation to a specified screen component. This is why we are able to use it on a button at HomeScreen.js, which, when pressed, leads to the AboutScreen page, as shown below:

In the App.js code, we finally created an app container by wrapping our components within NavigationContainer tags. This container manages navigation state.

To run the app, you’ll need to download the Expo client app. You can get the ‎iOS and Android versions. Make sure your command line is pointed to the project folder and run the following command:

You should see a QR code displayed on the terminal. Scan the QR code with the Expo app on Android, and for the iOS app, you can scan using the normal iPhone camera, which will prompt you with a command to click to open the Expo app:

Most mobile apps have more than one screen. A common style of navigation in such mobile apps is tab-based navigation. Here we will focus on how to implement tab navigation using the createBottomTabNavigator function.

Before implementing tab-based navigation, we have to first install the bottom-tabs module like so:

Let’s add another screen in our app by creating a ContactScreen.js file under /components:

Now let’s add to the imports at the top of our App.js file:

Recall that it is useful to implement our navigation in the root App.js component. Therefore, we will implement our tab navigation by importing createBottomTabNavigator in App.js. Let’s replace createStackNavigator with this line of code:

If you run the app with npm start and open it on your Expo client, you should see the bottom nav implemented:

Next, head on to the Reanimated documentation to set up gesture control in your project.

After this step, write these import statements in App.js:

If you npm start, you should be able to see the changes right away. Swipe from the left to see the drawer navigation:

You can customize your drawer navigation by adding icons beside the route names. In the assets folder of this project, there are currently three icons:

We can customize by adding navigationOptions to the following screen component files:

The drawerActiveTintColor prop lets you apply any color based on active or inactive states of navigation tabs and labels. For example, we can change the active state color for our nav drawer labels. Go to the Drawer.Navigator variable and add to the options object:

This results in a change of color:

There are two simple steps to pass params to routes:

Finally, to set the header title, we can use the title property of the options prop like so: 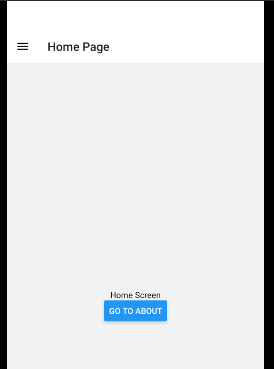 I hope that this article will jumpstart your use of the React Navigation package in your existing or future React Native projects.

There’s a lot more that can be done, and React Navigation will meet most of your needs. To learn more, check out the React Navigation documentation and feel free to grab the final code from my GitHub repo.