Eshiet Ekemini Follow A graduate of University of Uyo and a tech enthusiast, Ekemini has been building for mobile for two years, with a particular focus on Kotlin and Flutter.

Kotlin vs. Flutter for Android development 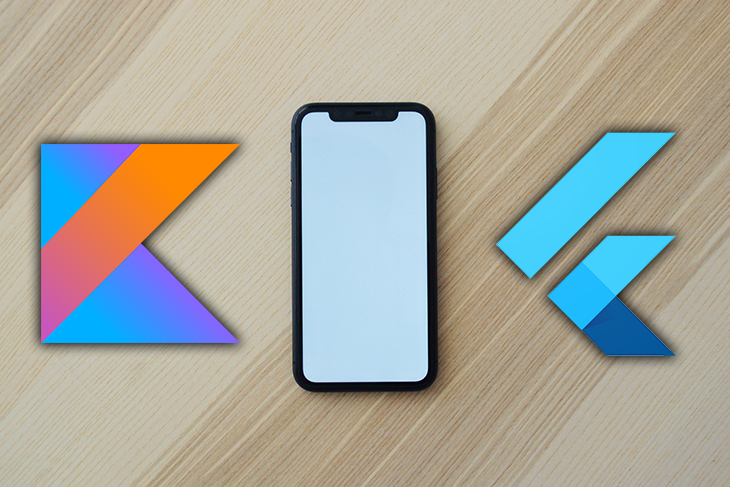 Editor’s note: This article was updated on 23 March 2022 to include information about the most recent release of Flutter (v2.10) and Kotlin Multiplatform.

Today, there has been a major explosion in the tech ecosystem — the global mobile application market share, according to Allied Market Research, is projected to hit $407.7 billion in 2026. This leaves a major battleground for dominance in the tools and frameworks used for creating mobile applications.

In this article, we’ll explore two of the most popular frameworks and programming languages for creating mobile applications, while comparing and contrasting what makes them a good choice for developing your next mobile application.

According to the official Flutter docs, Flutter is Google’s portable UI toolkit for crafting stylish, natively compiled, mobile, web, and desktop apps from a single codebase.

Flutter operates with existing code and is freely and openly used by developers and organizations worldwide.

Flutter was first acquired by Google in 2013 and had already started to work with technology giants. Flutter is fundamentally a free, open-source platform for the development of applications with a native feel for Android and iOS, all from one codebase.

Kotlin is also bundled with multi-platform capabilities, which allows developers to share their code, business logic, and data layer with platforms such as Android, iOS, and others.

At the time of writing, Kotlin Multiplatform is currently in alpha.

Some of Kotlin’s top features are:

Since the inception of Android, the official programming languages were the famous Java and C++. But at Google IO 2017, Google announced their support for Kotlin as the official Android programming language, and integrated Kotlin support directly into Android Studio. This enabled developers to convert previous Java code into Kotlin, and also run Kotlin and Java code side-by-side in their projects.

This is tricky question, and one that has generated lots of debate between developers and tech enthusiasts. However, choosing between Kotlin or Flutter is more of a personal preference than a one-size-fits-all best choice.

If you are choosing between each of these, you should carefully the unique needs of the project you are working on. For instance, performance-reliant applications should choose to go with Kotlin, as it has a higher performance capabilities.

Furthermore, If your application is going to have access to lots of native components like Bluetooth or NFC, then Kotlin would still be a great choice, seeing it has been around much longer and has more resources for these.

But, if you’re working in a fairly small startup team and would love to build out your minimum viable product (MVP) faster with great UI appeal, going with Flutter would be less expensive and provides some perks to work with.

Although the statistics don’t show a huge distinction, GitHub ranked Kotlin as number 14 when it comes to programming languages, with the highest number of PRs in the last quarter of 2021.

Dart, the programming language used by the Flutter SDK, ranks 16 on both popularity and number of PR’s in the last quarter of 2021. There have since been a significant amount of feature improvements in the framework performance, as well as many collaborative efforts in the Flutter community.

In addition, Flutter’s latest version 2.10 was released on 3 February 2022, and up to 50,000 Flutter apps have been uploaded to the play store with an apex rate of 10,000 new apps per month. Roughly three months after that, there were more than 90,000 Flutter apps, indicating nearly an 80 percent spike in growth.

Even if Kotlin has more applications on the Google Play Store, the momentum and adoption of Flutter are really much higher when compared to its Kotlin counterpart for mobile application development.

This Google trend diagram shows the number of searches for both Flutter and Kotlin in the last 12 months. This trend data is an indicator of the attention and interest between these two over time.

And, according to the Flutter showcase website, several major companies have ported their codebase from Kotlin to Flutter. Some of these companies include Realtor, Tencent, The New York Times, Google Assistant, and Square.

Here’s a brief comparison between Flutter and Kotlin for mobile app development.

Both Kotlin and Flutter have their performance pros and cons. One of the most remarkable features of Flutter is the hot reload and hot restart feature, which gives developers the ability to make changes to their code and see the user interface changes instantly, speeding up development time frames and makes it easier to build applications.

Kotlin, on the other hand, provides more access to native features and components like camera and Bluetooth, whereas in Flutter, these are achieved using libraries that are written in the native languages like Kotlin, Java, Swift, or objective C.

When it comes to the language syntax, Kotlin and Dart are more similar in many ways.

Although Kotlin does not make use of semicolons and Dart does, both languages work the same way when it comes to writing comments and handling white spaces. Also, both Dart and Kotlin are object-oriented programming languages.

Both Kotlin and Flutter have great community participation. But judging by the relative newness of Flutter in contrast to Kotlin, it has more active membership participation with growing popularity.

The Flutter documentation is also extremely detailed and up-to-date. It’s a great place for anyone without prior knowledge of the framework to start with, as it provides information based on experience.

Pricing here refers to the cost of development with either Kotlin for native application development or Flutter frameworks for cross-platform. When it comes to pricing, Flutter is open source and free to use, and it offers the fastest way to build out your MVP.

The time factor and cost for creating a mobile application with Flutter is significantly less, because both Android and iOS apps can be built and managed from a single codebase at the same time.

Kotlin is also free and open source, although it is largely employed for building Android applications. However, building out a fully fledged mobile application with this framework would require the extra cost of hiring someone to build the same version of the application for iOS and, thus, increase the complexity and cost by running two separate codebases.

When it comes to speed, Flutter performs well but lags in comparison to Kotlin, which is typically faster because it compiles to the format of the target platform.

If speed is important to you, Kotlin is the better candidate.

Flutter, on the other hand, can be set up on more development environments than Kotlin, such as Visual Studio Code and Android Studio itself. The timeframe for setting up Flutter and getting started with a project is relatively shorter than that of Kotlin.

Advantages and disadvantages of Kotlin for mobile app development

Advantages and disadvantages of Flutter for mobile app development

Code comparison between Flutter and Kotlin

Let’s take a look at a Flutter code snippet in a simple counter application. This application simply displays a zero value at launch, and has an increment and reset button for the value displayed on the screen:

The code for the CodePen above is given below:

Setting up the project above for Flutter took less than 10 minutes on an unsophisticated machine with a RAM of 8GB and a Core i3 processor. Setting up the Kotlin project and completing it took more than 30 minutes on the same machine. From this, you can see it’s easier to create an application using Flutter.

This is why Flutter is the best for MVP and startups. Besides reducing development time and cost, it runs on both the Android and iOS platforms. And, also, Flutter support for Windows, Linux and macOS has been in beta for some time, but with the latest release, Windows is the first to reach stable status.

The implication of this is that it will soon be ready for production usage. Flutter would be able to run on Android, iOS, web and desktop, simplifying the engineering process and structure for firms and tech companies in the future.

When it comes down to making a choice between either Flutter or Kotlin for mobile application development, all frameworks and programming languages have their ups and downs. But for startups or companies looking to keep the cost relatively low in building out their MVP, Flutter is a great choice.

Eshiet Ekemini Follow A graduate of University of Uyo and a tech enthusiast, Ekemini has been building for mobile for two years, with a particular focus on Kotlin and Flutter.
« Creating a React sortable table
What are React pure functional components? »

10 Replies to “Kotlin vs. Flutter for Android development”