How to use TypeScript with React: A tutorial with examples 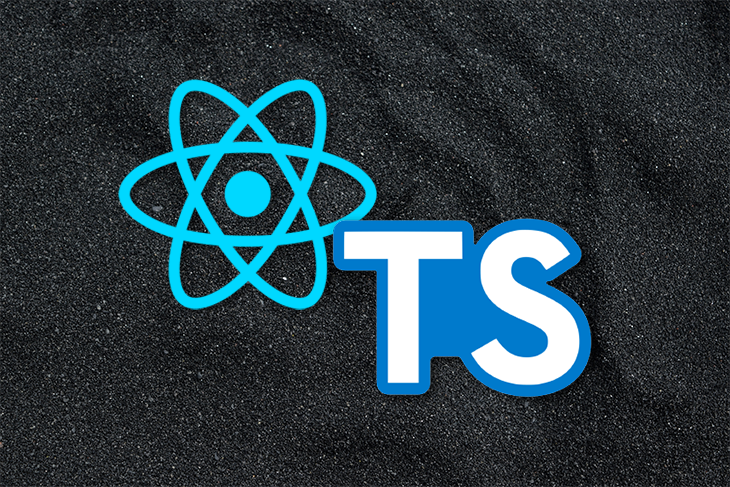 Editor’s note: This guide to using TypeScript with React was last updated on 2 August 2022 to include an overview of TypeScript’s benefits when combined with React and information about .tsx files.

We’ll cover the following with examples:

Created by Facebook and originally open sourced in 2013, React has become one of the most popular libraries in the frontend world today. React is easily extendable and can include features such as routing and state management patterns with libraries like Redux. React is minimal in its footprint but can be customized for almost any project.

For more about React at a high level, check out the official React documentation.

TypeScript is a free, open source programming language developed and maintained by Microsoft. It is a strict superset of JavaScript that adds optional static typing and class-based, object-oriented programming to the language.

A superset of JavaScript

JavaScript was initially created as a client-side language, but over time, developers understood that JavaScript could be used on the server, especially with the invention of the v8 engine.

JavaScript can quickly become complex and sometimes can’t live up to the full potential of an object-oriented programming language. TypeScript was born to bridge this gap and to become an alternative for enterprise-level development.

TypeScript emits JavaScript when compiled and is a popular name in the JavaScript world today. Even pure JavaScript applications ship a type.d.ts type definition for TypeScript developers.

Is React better with TypeScript?

TypeScript can be helpful to React developers in many ways. Below are just a few benefits of using TypeScript in React:

TypeScript offers variable checks by checking the data type assigned to statically-defined variables. This overall reduces the possibility of assigning the wrong types to our variables.

TypeScript also does compilation time checks that help flag errors such as wrong parameter assignments, syntax errors, and so much more. This is great because it reduces the likelihood of calling the wrong function or accidentally skipping a variable declaration.

The key to TypeScript is that it’s a statically-typed script. Programming languages can either be statically- or dynamically-typed – the difference is when type checking occurs. Static language variables are type-checked.

TypeScript allows you to define complex type definitions in the form of interfaces. This is helpful when you have a complex type that you want to use in your application, such as an object that contains other properties. This results in strict checks, which reduce the number of possible bugs you may produce without it.

JSX stands for JavaScript XML. It allows us to write HTML code directly in our React project. Using TypeScript with React provides better IntelliSense and code completion for JSX.

Finally, TypeScript is an open source language backed by Microsoft. It’s widely loved and used by millions of developers worldwide. Because it’s so widely used, it’s easy to find support and answers to your questions if you get stuck while learning or using TypeScript.

The introduction of .tsx also resulted in three additional things:

Difference between .ts and .tsx in TypeScript

The introduction of .tsx file extension caused the need for clarification. Many developers wanted to know the difference between the new file extension and the already existing .ts.

Now that we’ve gone over a general overview, let’s get to the installation. There are two ways to install and get started with TypeScript

To install TypeScript using npm, run the following in your terminal:

Because we installed TypeScript globally, we need to link it so that npm knows the location.

Once npm is done, you can verify that TypeScript is installed correctly:

The above will print out the version number of TypeScript installed.

To get started with a project after successful installation, create a folder that will hold the application.

Change directory to the new folder:

To install TypeScript with create-react-app, run the following one-liner in your terminal:

The command above will create a simple folder structure for your application, then install all the necessary modules and get your project up and running for you.

For this tutorial, we’ll use the npm init method.

How does TypeScript compile React code?

TypeScript always checks for a file called tsconfig.json in the project root folder for instructions. When it finds the tsconfig.json file, it loads the settings defined in the file and uses them to build the project.

A TypeScript project is compiled in one of the following ways:

When input files are specified on the command line, tsconfig.json files are ignored.

If you do not have the tsconfig.json file in your root folder, go ahead to create it and add the following code:

The JSON configuration above defines two major sections: the compilerOptions and exclude parameters.

In the compiler options, a target of es6 has been set. This means the JavaScript engine target will be set to es6 but will compile down to es5 as the target. Notice that there is also a key called jsx, which is set to react. This tells TypeScript to compile JSX files as React files. This is similar to running tsc  --jsx react. The outDir is the output folder after compilation.

If you’re familiar with TypeScript and its configuration, you might wonder why the include section is missing. This is because we’re going to configure webpack to handle taking in the entry files, passing them to TypeScript for compilation, and returning a bundled JavaScript script for browsers.

You can learn more about other configuration options in the TypeScript docs.

Configuring webpack for React and TypeScript

webpack is a tool that lets you compile JavaScript modules and is also known as a module bundler.

To get started with webpack in TypeScript, we need to install webpack and a webpack plugin called ts-loader. To do this, run the following command in the terminal:

What is ts-loader? As its name implies, ts-loader is the TypeScript loader for webpack. Put simply, it’s a plugin that helps webpack work well with TypeScript.

Just like TypeScript, webpack also checks for a file called webpack.config.js for configuration.

If it doesn’t already exist, create a new file called webpack.config.js and add the following code:

The code above will direct webpack to enter through the ./src/index.ts file, load and compile all the .ts and .tsx files through the ts-loader, and then output a bundle.js file in our dist directory.

After all configured so far, wouldn’t it make sense if you could just run a command like npm run magic anytime you want to create a bundle? Yes, it would. So, open the package.json file in the project root directory and update the scripts section with:

After all the configurations were done above, it’s time to create the main entry point file of our project, but before we do that, we need to install the following:

Next, create a new folder src and then a file in the src folder called index.tsx in the root and add the following code:

Above is a simple React setup, except that it is using TypeScript. To compile the file, run the command below in your terminal:

A build folder with a file named bundle.js has been created.

If you double click on the index.html file to open it in a browser, you will see:

Now that we’re great with the basics of writing React in TypeScript, let’s dive into how we can create React components, as this is an essential part of developing our application.

In the already created src folder, we’ll add a folder called components. This is the folder that will hold any React component we create. In the components folder, go ahead to create a new file called FirstComponent.tsx and add the following code:

The above code block is a simple React component that returns a logo and some text.

Looking at the code block above, you see that the differences are on lines 3 and 7, where you imported the new component and rendered it, respectively. 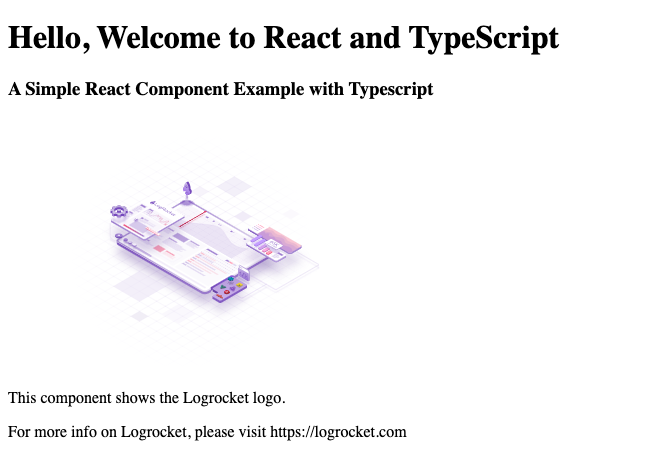 To see how you can use interfaces with your react components, create a file UserInterface.ts in the src folder and add the following code:

The code block above defines a simple User interface, which will be passed in as props into a new component. Because this interface is strongly typed, notice you cannot pass an integer for the name key, as the value is a string.

Create a new component in our components folder called UserComponent.tsx and add the following code:

The code block above is very self-explanatory. The UserInterface created earlier on has been imported and passed down as the props of the UserComponent. In the constructor, we checked that the props passed are of the UserInterface type and in the render function, the data will be displayed on our page.

Now run npm run magic, navigate to your browser and view the updated changes. You should see: 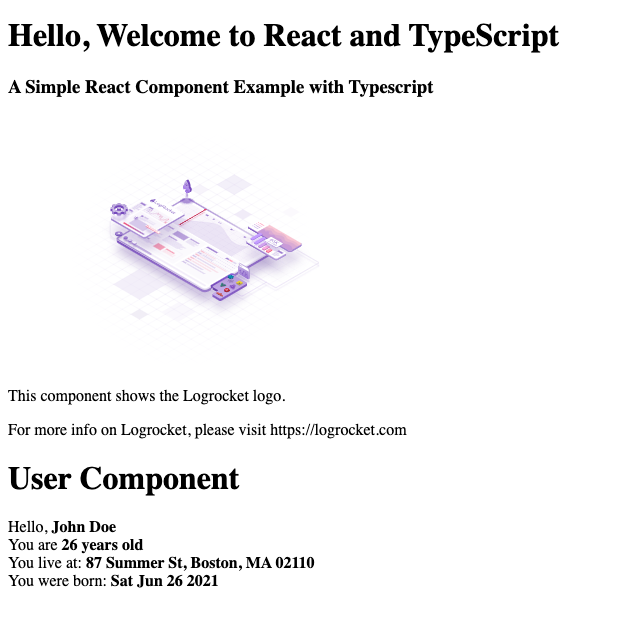 In this tutorial, we demonstrated how to use TypeScript with React. We also walked through how to configure webpack with ts-loader to compile the TypeScript files and emit a final build.

The codebase for this tutorial is available here for you to play around with on GitHub.

7 Replies to “How to use TypeScript with React: A tutorial with…”