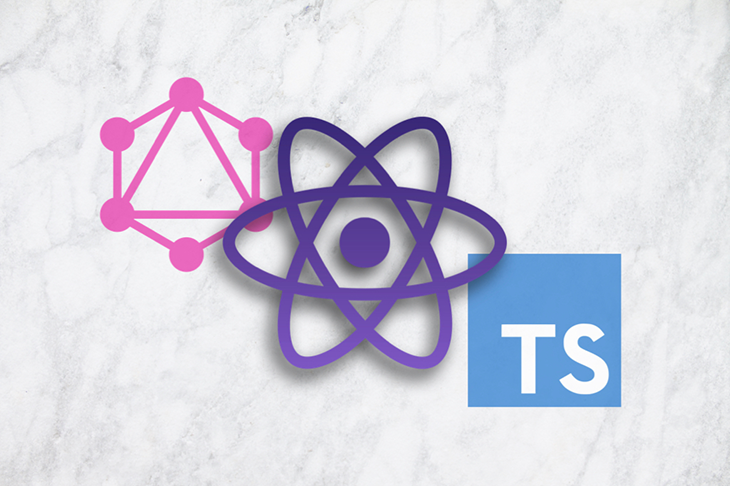 GraphQL and TypeScript have both exploded in adoption, and when the two are combined with React, they create the ideal developer experience.

GraphQL has transformed the way we think about APIs and utilizes an intuitive key/value pair matching where the client can request the exact data needed to display on a web page or on a mobile app screen. TypeScript extends JavaScript by adding static typing to variables, resulting in fewer bugs and more readable code.

This article walks you through building a client-side application with React and Apollo using the public SpaceX GraphQL API to display information about launches. We will automatically generate TypeScript types for our queries and execute these queries using React Hooks. We’ll be covering these topics:

The article will assume you have some familiarity with React, GraphQL, and TypeScript, and will focus on integrating them to build a functioning application. If you need additional practice with them, you can find plenty of quality coding tutorials to get you up to speed.

If you get stuck at any point, you can refer to the source code (Note: The code in this repository may be out of date.) or see the live app.

A GraphQL API is required to be strongly typed, and the data is served from a single endpoint. By calling a GET request on this endpoint, the client can receive a fully self-documented representation of the backend, with all available data and the corresponding types.

With the GraphQL Code Generator, we scan our web app directory for query files and match them with the information provided by the GraphQL API to create TypeScript types for all request data. By using GraphQL, we get the props of our React components typed automatically and for free. This leads to fewer bugs and a much faster iteration speed on your products.

Getting started with TypesScript, React, and GraphQL

We will use create-react-app with the TypeScript setting to bootstrap our application. Initialize your app by executing the following command:

By using the --typescript flag, CRA will generate your files and .ts and .tsx, and it will create a tsconfig.json file.

Navigate into the app directory:

Now we can install our additional dependencies. Our app will use Apollo to execute GraphQL API requests. The libraries needed for Apollo are apollo-boost, react-apollo, react-apollo-hooks,  graphql-tag, and graphql.

apollo-boost contains the tools needed to query the API and cache data locally in memory; react-apollo provides bindings for React; react-apollo-hooks wraps Apollo queries in a React Hook; graphql-tag is used to build our query documents; and graphql is a peer dependency that provides details of the GraphQL implementation.

graphql-code-generator is used to automate our TypeScript workflow. We will install the codegen CLI to generate the configuration and plugins we need.

Set up the codegen configuration be executing the following command:

This will launch a CLI wizard. Do the following steps:

Now install the plugins the CLI tool added to your package.json by running the yarn command in your CLI.

We will also make one update to our codegen.yml file so that it will also generate typed React Hook queries by adding the withHooks: true configuration option. Your configuration file should look like the following:

A primary benefit of GraphQL is that it utilizes declarative data fetching. We are able to write queries that live alongside the components that use them, and the UI is able to request exactly what it needs to render.

When working with REST APIs, we would need to find documentation that may or may not be up to date. If there were ever any problems with REST, we would need to make requests against the API and console.log the results to debug the data.

GraphQL solves this problem by allowing you to visit the URL and see a fully defined schema and execute requests against it, all in the UI. Visit https://spacexdata.herokuapp.com/graphql to see exactly what data you will be working with. 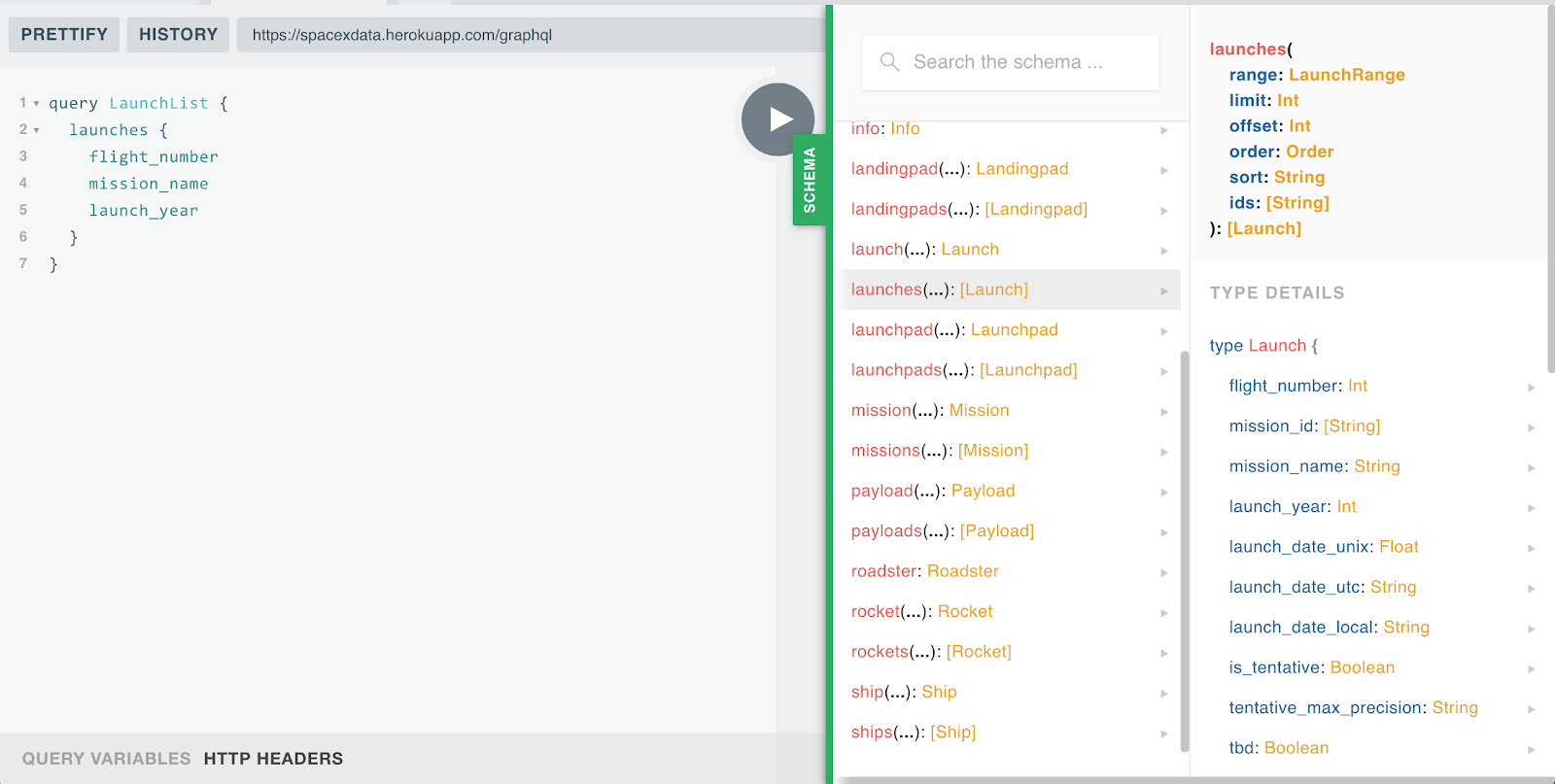 While we have a large amount of SpaceX data available to us, we will display just the information about launches. We’ll have two primary components:

Our other query will get more detailed data for a single launch based on the flight_number. Since this will be dynamically generated by user interaction, we will need to use GraphQL variables. We can also test queries with variables in the playground.

Next to the query name, you specify the variable, prepended with a $ and its type. Then, inside the body, you can use the variable. For our query, we set the id of the launch by passing it the $id variable, which will be of type String!.

We pass in the id as a variable, which corresponds to the flight_number from the LaunchList query. The LaunchProfile query will also contain nested objects/types, where we can get values by specifying the keys inside brackets.

For example, the launch contains a rocket definition (type LaunchRocket), which we will ask for the rocket_name and rocket_type. To get a better understanding of the fields available for LaunchRocket, you are able to use the schema navigator on the side to understand the available data.

Now let’s transfer this query to our application. Create a src/components/LaunchProfile folder with index.tsx, LaunchProfile.tsx, query.ts, and styles.css files. Inside the query.ts file, we paste our query from the playground.

Now that we have defined our queries, you are finally able to generate your TypeScript interfaces and the typed Hooks. In your terminal, execute:

Inside src/generated/graphql.ts, you will find all the types needed to define your application, along with the corresponding queries to fetch the GraphQL endpoint to retrieve that data.

This file tends to be large, but it is filled with valuable information. I recommend taking the time to skim through it and understand all the types our codegen created based entirely on the GraphQL schema.

For example, inspect type Launch, which is the TypeScript representation of the Launch object from GraphQL that we were interacting with in the playground. Also scroll to the bottom of the file to see the code generated specifically for the queries that we will be executing — it has created components, HOCs, typed props/queries, and typed hooks.

We initialize a new ApolloClient and give it the URI of our GraphQL API, and then we wrap our <App /> component in the context providers. Your index file should look like the following:

We now have everything in place we need to execute GraphQL queries through Apollo.

Inside the src/components/LaunchList/index.tsx, we will create a function component that uses the generated useLaunchListQuery hook. The query hooks return data, loading, and error values. We will check for loading and an error in the container component and pass the data to our presentational component.

We will keep the separation of concerns by using this component as a container/smart component, and we will pass the data to a presentation/dumb component that simply displays what it has been given. We will also show basic loading and error states while we wait for the data.

Our presentational component will use our typed data object to build the UI. We create an ordered list with <ol>, and we map through our launches to display the mission_name and launch_year.

If you are using VS Code, the IntelliSense will show you exactly the values available and provide an autocomplete list since we are using TypeScript. It will also warn us if the data we are using can be null or undefined.

Seriously, how amazing is that? Our editor will code for us. Also, if you need the definition of a type or function, you can Cmd + t, hover it with the mouse, and it will give you all the details.

We will also add some CSS styling, which will display our items and allow them to scroll when the list overflows. Inside src/components/LaunchList/styles.css, add the following code:

Now we’ll build our profile component to display more details about the launch. The index.tsx file for this component is mostly the same, except we’re using the Profile query and components. We also pass a variable to our React hook for the id of the launch. For now, we’ll hardcode it to '42' and then add dynamic functionality once we have our app laid out.

Inside src/components/LaunchProfile/index.tsx, add the following code:

We now need to create our presentation component. It will display the launch name and details at the top of the UI and then have a grid of launch images below the description.

The final step is to style up this component with CSS. Add the following to your src/components/LaunchProfile/styles.css file:

To get the styling we want, we will change src/App.css to the following:

Execute yarn start in your terminal, navigate to http://localhost:3000 in your browser, and you should see a basic version of your app!

Now we need to add functionality to fetch the full launch data when a user clicks on an item in the panel. We will create a hook in the App component to track the flight ID and pass it to the LaunchProfile component to refetch the launch data.

In our src/App.tsx, we will add useState to maintain and update the state of the ID. We will also use useCallback named handleIdChange as a click handler to update the ID when a user selects one from the list. We pass the id to LaunchProfile, and we pass handleIdChange to the <LaunchList />.

Your updated <App /> component should now look like the following:

Inside the LaunchList.tsx component, we need to create a type for handleIdChange and add it to our props destructuring. Then, on our <li> flight item, we will execute the function in the onClick callback.

Inside LaunchList/index.tsx, be sure to import the OwnProps declaration to type the props being passed to the container component, and then spread the props into the <LaunchList data={data} {...props} />.

Since we have separated the presentation from the data, we don’t need to make any updates to our <LaunchProfile /> component; we only need to update the index.tsx file so that it refetches the full launch data when the selected flight_number changes.

Now you have it! If you followed the steps, you should have a fully functioning GraphQL app. If you got lost anywhere, you can find a working solution in the source code (Note: The code in this repository may be out of date).

Once the app is configured, we can see that development speed is incredibly fast. We can build a data-driven UI with ease. GraphQL allows us to define the data that we need in components, and we can seamlessly use it as props within our components. The generated TypeScript definitions give extremely high confidence in the code we write.

If you are looking to dive deeper into the project, the next steps would be to add pagination and more data connectivity using additional fields from the API. To paginate the launch list, you would take the length of your current list and pass the offset variable to the LaunchList query.

I encourage you to explore it deeper and write your own queries so that you can solidify the concepts presented.

If you found this article helpful, follow me on Medium for more articles on React, Node.js, JavaScript, and open source software! You can also find me on Twitter.

3 Replies to “Build a GraphQL + React app with TypeScript”