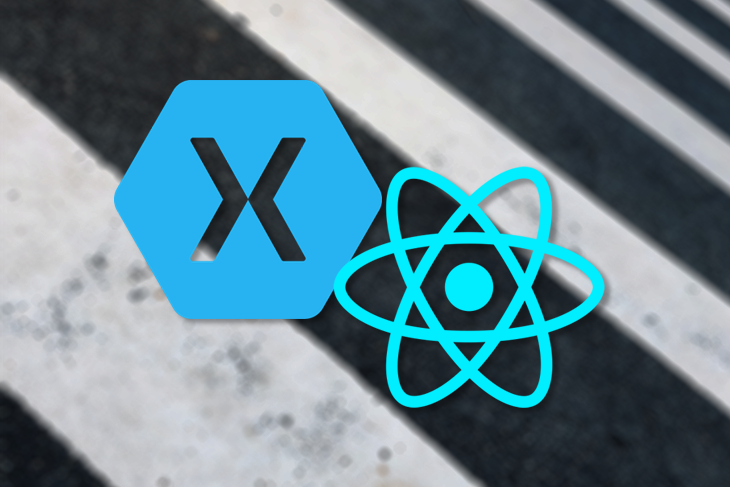 Editor’s note: This article was last updated on 15 June, 2022 to include more up-to-date stats and information about Xamarin and React Native.

Cross-platform mobile app development is the process of building mobile applications for multiple platforms, such as iOS and Android, with a single technology stack.

This means that instead of creating multiple versions of your app, each written using the dedicated native language for each platform, you can write your code one time and deploy it on several platforms at once.

First is the ability to write once, deploy everywhere. The most significant advantage of cross-platform development is having a single codebase that you can export to multiple operating systems.

Next is uniformity across apps. Having a single shared codebase allows you to maintain the same look, feel, and experience across all platforms. All updates and fixes are also automatically reflected everywhere.

Third is saving resources. Instead of having separate teams with different skill sets working on multiple native versions of your app, you only need one team working on a shared codebase. This allows you to leverage smaller teams and quicker development time to save time and money.

Last is the ability to have a wider audience. Having your app published on multiple platforms allows you to increase your market reach without any added effort, consequently increasing your chances of getting more downloads and users.

Below are some of the cons associated with cross-platform development.

Number one is performance issues. While cross-platform frameworks work on providing apps that are as close to native apps as possible, they still don’t integrate seamlessly with the respective platforms and have inconsistent communication between the native and non-native components, reducing the app’s speed and degrading performance.

Next are issues with inconsistencies across platforms. Cross-platform development tools don’t have all the features offered by each different platform, so you might need to employ some workarounds. It may also take these frameworks some time to get up-to-date with the newest features and updates released by the platforms.

Xamarin is an open-source, cross-platform mobile app development framework that was founded in 2011.

What is Xamarin used for?

Xamarin is particularly useful for sharing code and business logic across platforms as well as writing cross-platform applications in C# with Visual Studio. According to the official docs, Xamarin lets you share an average of 90 percent of your app code across platforms. That means you can achieve a native look and feel — not to mention native performance — on each platform without writing in multiple languages.

You can write Xamarin apps on a PC or Mac and compile them into native packages, suck as .apk files and .ipa files for Android and iOS devices, respectively.

Xamarin is used to write apps that serve a wide variety of industries, including energy, media, healthcare, transportation, and more.

Below are some benefits associated with Xamarin cross-platform mobile app development.

First is performance; Xamarin apps are known for having almost native-like performance levels.

Second is Xamarin’s complete development ecosystem: C#, .Net, and Microsoft Visual Studio are all you need to build mobile apps with Xamarin, making it one of the most complete cross-platform mobile app development frameworks out there.

Next is the seamless user experience. Xamarin.Forms allows you to take advantage of standard interface elements by providing a library of templates so that you can reuse your code across different platforms. You can also use Xamarin.iOS and Xamarin.Android for manual customization, if needed.

Now let’s zoom in on some of the drawbacks associated with writing cross-platform mobile apps in Xamarin.

First is the update delay. Whenever new platform features or updates roll out, there is usually a delay until these changes are reflected in the Xamarin tools, which may cause issues with your app.

Second is the larger app size. Xamarin apps can add around five megabytes for releases and 20 megabytes for debug builds, making them larger than native apps. This is primarily due to the libraries used to translate C# calls into native calls.

Xamarin is great for apps with a simple UI. However, building complex applications or mobile games with Xamarin might not be the best thing to do, as you will have to spend a lot of time writing platform-specific code, which defeats the purpose of using it.

Finally, you might need to rewrite some parts of the UI in your app in native code. That means that you will need some knowledge in native programming languages such as Kotlin or Java for Android, and Swift or Objective-C for iOS

The following is a partial list of tools and libraries designed to improve the Xamarin developer experience.

What is React Native?

React Native is an open-source, cross-platform mobile app development framework created by Facebook in 2015. It is designed to enable developers to use JavaScript and React along with native platform capabilities to build mobile apps.

Why use React Native?

Below are some of the benefits of using React Native to build cross-platform mobile apps.

Second, React Native offers a vast library of UI components, allowing for faster development time. It also has access to native functionalities, like cameras and accelerometers.

Next, React Native supports hot reload, which allows developers to apply changes to the apps right away without having to recompile them.

Finally, React Native is reliable and free; it was developed and supported by Facebook, and it remains an open source platform.

For all its advantages, there is a small handful of drawbacks you should consider before deciding to write your next mobile app in React Native.

First is navigation. Navigation built in React Native is not seamless and not comparable to native navigation. Second is a complex UI; React Native struggles with building complex animation and transitions.

Below is a partial list of tools and libraries designed to improve the React Native developer experience:

Is Xamarin better than React Native?

Now that you have a good idea of what Xamarin and React Native are used for, pros and cons associated with using each, and what high-profile companies use these frameworks to build mobile apps for their customers, it’s finally time to compare Xamarin vs. React Native.

We’ll evaluate Xamarin vs. React Native according to the following criteria:

One of the most important factors you should consider when choosing a cross-platform development framework is app performance.

While React Native and Xamarin provide near-native app performances, some argue that Flutter’s performance is better because Dart code is compiled to a C-library, which means it’s close to the native code. This improves communication speed and provides better performance.

However, it’s hard to benchmark performance as it depends on many factors and variables including device, code, app, and features being used.

With over 1.6 million developers across 120 countries, Xamarin has developed quite the user base over the years. However, this is largely due to the fact that it is one of the oldest frameworks out there.

Since its release, React Native has slowly but surely gained popularity, surpassing Xamarin in 2017. 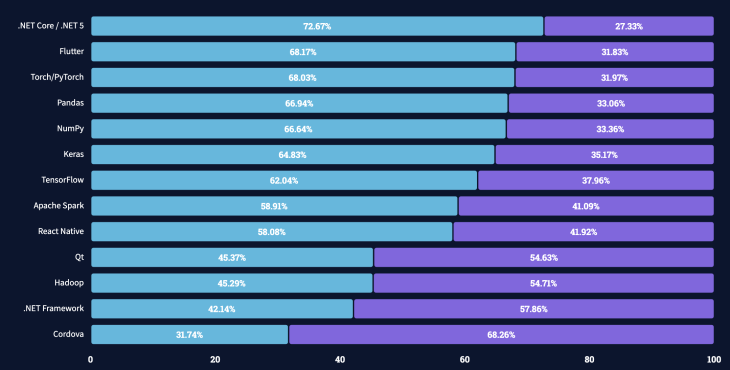 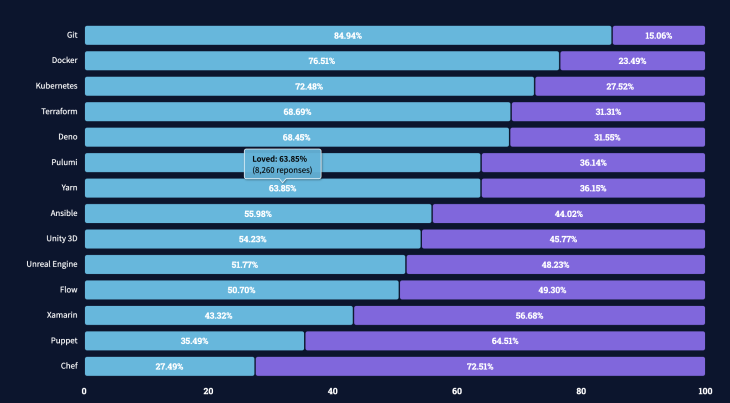 According to Stack Overflow’s “2021 Developer Survey,” React Native is more “loved” than Xamarin, with 58.08 percent of developers expressing interest in continuing to develop with React Native, as opposed to 43.32 percent for Xamarin.

The cross-platform tool development language is another crucial factor to consider when making your decision.

Xamarin uses .Net languages, such as C# and F#, which are common languages and can be used to write native platform code. React Native uses JavaScript, which was not invented for it, but it still does a great job with React Native apps.

You might encounter a few issues or come across some required workarounds as JavaScript was originally developed for the web. As a result, some APIs might not work, while others may have to be proxied by React Native.

According to the TIOBE Programming Community Index, C# is the fifth-most popular programming language worldwide as of June 2022, followed by JavaScript in seventh place. This makes both Xamarin and React Native solid choices when it comes to development languages; both work with a familiar language that can help boost your productivity and save you from enduring a steep learning curve.

React Native offers some prebuilt and partly adaptive components, such as buttons and text inputs. However, most of these components aren’t really adaptive. If you need something a bit more advanced, you would have to build it yourself by recomposing these built-in components.

Xamarin.Forms offers a complete cross-platform UI toolkit consisting of native UI components for both platforms, which are compiled into platform-specific UI components. You can also use Xamarin.iOS or Xamarin.Android for custom app UI and better performance.

Code reuse is what brings developers to cross-platform frameworks, so how much of the code written with each framework is actually reusable?

React Native allows you to write the code once and ship anywhere, but it also embraces platform differences. This means that from time to time, you have to find out on which platform you’re running and load a different component or set of components depending on the platform you’re running. Still, a considerable part of the codebase can still be reused.

Xamarin prides itself on allowing developers to reuse up to 96 percent of their C# code by leveraging the language. Xamarin also offers forms components, making it better for code reuse than React Native and Flutter which share an average of 60–90 percent of codes.

While both Xamarin and React Native are free, open-source platforms, Xamarin is only free for individuals and small companies. For large enterprises, single-user licenses start at $499 and go anywhere up to $2,999 for a Visual Studio Enterprise annual subscription.

While this might not be a problem for large enterprises, the costs can still add up, which could cause bigger companies to go with React Native.

When choosing a framework, you should also consider its community support, especially if you’re new to it. This includes forums, documentation, tutorials, etc.

React Native has a pretty good amount of support out there. You can easily find a lot of learning material as well or developers on forums or QA sites like Stack Overflow to ask for support whenever you need any help.

For Xamarin, support is quite limited. However, Microsoft provides a solid documentation and some free Xamarin courses and learning paths to help you get started.

When choosing a cross-platform development tool, there is no one-size-fits-all option. Both Xamarin and React Native have proven successful in building great mobile apps. Your specific needs and preferences determine which framework is best for you.

For example, if you already have some prior knowledge of JavaScript, then it might be wise to go with React Native. At the end of the day, it all depends on what you’re building and what you hope to achieve. Any framework will have its pitfalls, but the one where the advantages heavily outweigh those setbacks would probably be the right choice for you.

16 Replies to “Xamarin vs. React Native”