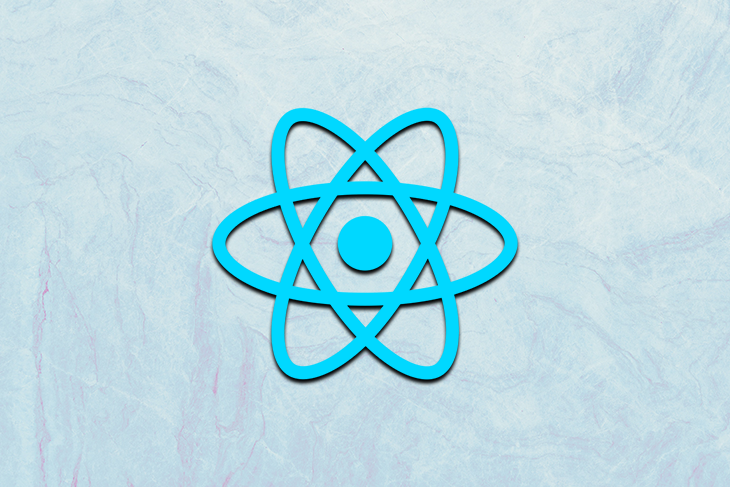 When you move from using class components to functional components in React, it can be a bumpy ride. You have to learn how to use React Hooks. Most likely the first one you learned is useState. No big issues there because it works similarly to setState.

But then you have to update state based on prop, which means it’s time to try useEffect. This can seem simple, too, at first: you read about the dependency array and it makes sense. But it is also pretty easy to make a wrong turn when using useEffect. Let’s look at an example.

The mistake in the code above is pretty obvious, and you can see the results here. The code above creates an endless loop. But another way you can make a mistake with useEffect is by creating a stale closure, which can be harder to spot and causes issues that could be difficult to track down.

This happens when a variable in useEffect never updates. Sometimes this is what you want, but most of the time, you don’t. Here is an example of a stale closure.

You can see this code running here. The count variable that renders in the component updates when you click the button, but the value that gets logged in the useEffect every two seconds remains 0 the entire time. We were expecting this, but as your code gets more complex, it may be harder to find the issue. Fortunately, you can use an ESlint plugin to find it for you, before it becomes a bug.

What is the exhaustive deps lint rule?

If you hover over the squiggles under the dependency array in the code example, you will see why lint is angry. 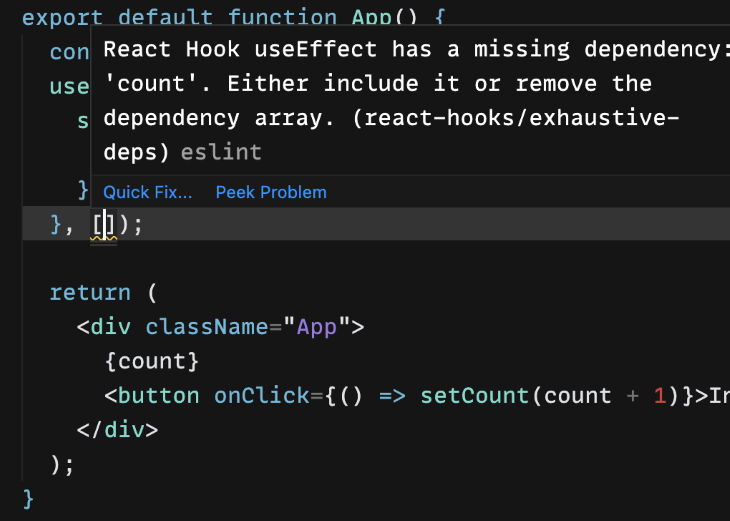 Linting is very controversial. Most developers think it should be done, but they widely disagree on how it should be done. Many of the rules like those about indention, the spacing of curly brackets, and others are more about readability than they are about ensuring good code.

But eslint-plugin-react-hooks can keep you from making mistakes with React Hooks that can be hard to track down and debug. This ESlint plugin will ensure you are following the rules of Hooks in your React code, which are:

It will also check the dependency arrays in your Hooks to ensure you get the functionality you expect from them.

How to add this rule to React projects

If you are using Create React App, the ESlint plugin for React Hooks is already included by default. To add it to an existing project, just install it with npm or yarn.

Next, add the following to your ESlint configuration:

How to fix exhaustive deps warnings

Once you have the exhaustive deps rule in your ESlint configuration, you may run into some warnings that might require more thinking than our first example did. You can find a long list of comments on this rule on GitHub where developers using the rule weren’t quite sure why they were getting a warning or how to fix it.

The first exhaustive deps warning we got was because a single primitive variable was missing in the dependency array.

It is pretty simple to see why there is a warning and why the fix you get by clicking Quick Fix in your IDE will work. Adding the count variable will fix the problem and not cause any weird issues. But sometimes, the suggested solution has to be examined before you use it.

You can see this code live here. Notice there is a warning about the dependency array needing the obj variable. Weird! It is always the same value, so why would this happen?

Objects and arrays in JavaScript are compared by reference, not by value. Each time the component renders, this object has the same value but a different reference. The same thing will happen if the variable was an array.

To remove the warning, you could add the obj variable to the array, but this means the function in useEffect will run on every render. This is also what clicking Quick Fix will do and not really how you want the app to function. One solution is to use an attribute of the object in the dependency array.

Another option is to use the useMemo Hook to get a memoized value of the object.

You can also move the obj variable either into useEffect or outside of the component to remove the warning, because in these locations, it won’t be recreated on every render.

The above examples are contrived to show possible ways to fix a dependency array warning when it doesn’t seem to make sense. Here is an example you might want to look out for in your code.

You do want to fix the warning without disabling the lint rule, but, like in the above examples, it will cause the function in useEffect to run unnecessarily to use the lint suggestions. In this example, we have props that are being passed into a component:

If the group prop is an object, React will check if the current render points to the same object in the previous render. So, even if the object is the same, if a new object was created for the subsequent render, useEffect will run.

We can fix this problem by checking for a specific attribute in the group object that we know will change.

You can also use the useMemo Hook if any of the values could change.

Here, the group variable will update when either the id or name value changes, and useEffect will only run when group constant changes. We could also simply add these values to the dependency array instead of using useMemo.

There will be times when the lint warning tells you that a function is missing in an array. This will happen any time it could potentially close over state. Here is an example.

With the complexity of React Hooks and the hard-to-find issues, you can create if you take a wrong turn developing your app, adding the exhaustive deps lint rule along with the rule of Hooks rule is a necessity. These rules will save you time and instantly tell you when you did something wrong.

With the right IDE extensions, even fix the problem for you. While often the “Quick Fix” solution works, you should always examine your code to understand why there was a warning. This way, you’ll find the best fix if you want to prevent unnecessary renders and possibly find an even better solution.

Stephan Miller Follow Stephan is a full-stack web and mobile developer with over 16 years of experience.
« React Redux connect(): When and how to use it
What is a sprint review? Meeting agenda example and overview »