The dialog element: The way to create tomorrow’s modal windows 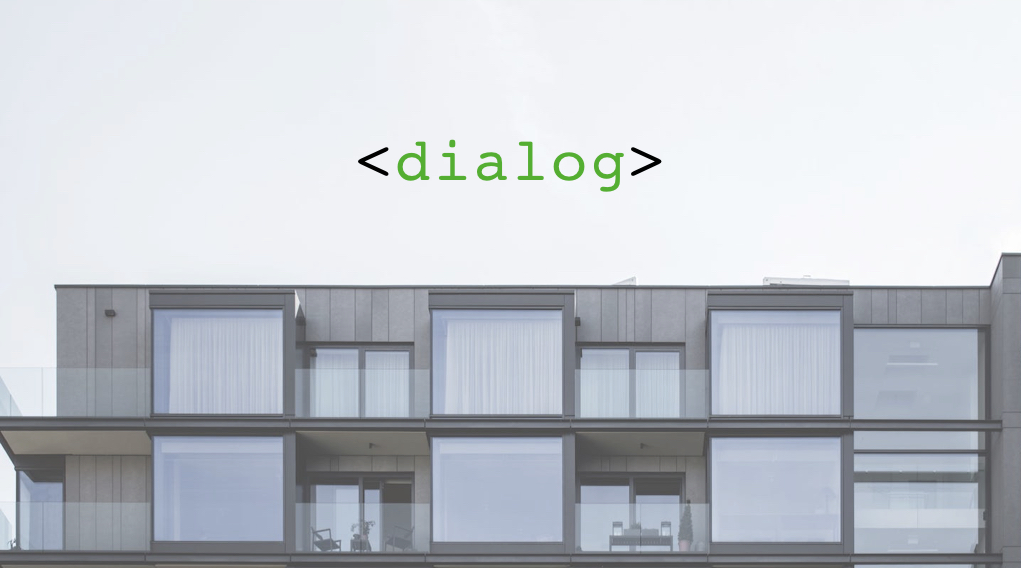 The dialog box is a common user interface design pattern that comes up over and over again on websites — so often that the W3C came up with some standardized HTML markup to describe a dialog window.

Traditional dialog windows created with other HTML markup and CSS have been implemented in most front-end frameworks for a long time, and that’s probably still the way to go since the HTML dialog element still has limited browser support.

But if front-end frameworks are still the better choice, why create a standardized dialog element?

Well, there are many reasons, but chief among them is accessibility by screen readers and enabling things like search engine crawlers and machine learning agents to interpret the dialog window. As browser support improves over time, this standard will be the clear choice to create modal windows moving forward.

First, we’ll focus on the HTML markup for the dialog element, then we’ll add some JavaScript later.

The HTML behind our dialog window

Inside the index.html file, let’s create the dialog element with an opening and closing tag:

However, this won’t show anything on the page just yet. In order for this to appear, we need to add the boolean attribute open to the dialog element:

Inside the dialog element, we’ll create a simple form with a text input of type text and a button of type submit:

Note: Here I’ve set a method of the form to dialog. This is a new form method that works in coordination with the parent dialog element. When the submit button is pressed, it will submit the form and dismiss the dialog window.

Now we’ll create some buttons that will allow us to make the dialog window reappear. These will need JavaScript to work, which we will add later.

This is a common design pattern because when a dialog window is open, you often need the user to perform some sort of interaction before they continue using the rest of the application.

For writing the JavaScript, I will remove the open attribute from the dialog element and then add an ID attribute so we can select it with our JavaScript, just like the buttons.

The JavaScript for our dialog window

Inside the JavaScript (app.js) file, we will write our event-based code in an anonymous function, which will be executed on page load.

First, we will gather the elements on the page, along with the variables — the dialog window and the two buttons. We’ll create a variable for each and get them by their ID.

Next, we will create two event listeners, one for each button.

We will add an EventListener to the openDialog button so that when it’s clicked, the function show() will execute. The show() function displays the dialog element on the page the same way it did when we used the open attribute earlier in our HTML.

Note: I have styled the buttons so that they are visible on the GIF above, but it won’t affect functionality in any way.

2. EventListener for opening the dialog window as a modal window

We’re going to do the same thing for our open modal window dialog as we did above: add an EventListener to the openModalDialog button so that when it’s clicked, the function showModal() will execute.

So here, instead of the show() function, we’re using the showModal() function, which will still show the dialog window. But this time, the rest of the page will have a gray, transparent overlay that will block any other mouse clicks.

A polyfill is a piece of code that implements a feature that isn’t natively supported by particular web browsers. Typically, they first check whether a browser supports an API and use that if available; otherwise, they implement their logic to make it work on the browser.

Right now, only Chrome and Opera fully support the HTML dialog element, and in order to use it in Firefox, the user must explicitly enable the feature.

But we can still use the HTML dialog element in other browsers(Safari, IE, etc.) using dialog-polyfill, which is maintained by Google Chrome. The polyfill will add support for non-supporting browsers; it also supports IE9 and above.

A couple things to note: adding polyfill in our JavaScript (app.js) file won’t affect the HTML dialog element working on Chrome and Opera in any way. There will only be the single app.js file.

Additionally, if we want to use the HTML dialog element only on Chrome or Opera, we won’t need a polyfill. But if we want to use it on all browsers — which would probably be the case — we will have to use polyfill until there is complete support on the rest of the browsers.

3. Create the <dialog> element within the HTML document (we have already created one above).

Now we have covered the essentials of the dialog element in HTML. If you’re interested in learning more, consider reading these resources from Mozilla and Can I use…, as well as the official spec.

I hope you’ve found this post informative and helpful. I would love to hear your feedback!

Thank you for reading!