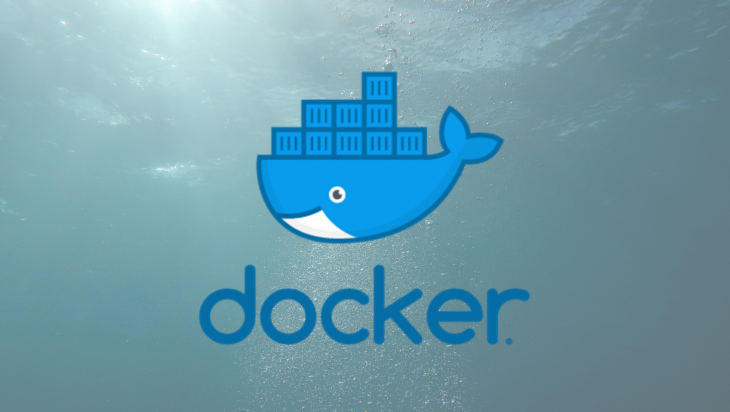 Docker is one of the most important technologies in enterprises nowadays. Most tech companies are using Docker to improve the deployment strategy of its products and services, making them robust and scalable. In this article, we will look at one of the most promising features of writing Dockerfiles efficiently to reduce the final image size. But first, let’s understand a bit about Docker.

Docker is containerization of the applications similar to VMs, but very lightweight (read the complete article on Docker vs Virtual Machines). Docker is a tool to easily create, deploy, and run applications by using containers that are independent of the OS.

A container packages the application services or functions with all of the libraries, configuration files, dependencies, and other necessary parts to operate. Each container shares the services of one underlying operating system.

What are these Docker Images?

Docker Images are the set of instructions written in a file called Dockerfile. These instructions act as a multi-layered filesystem in Docker. When a Docker user runs the images, it produces one or multiple containers.

We can also say that Docker Images are immutable files, basically a snapshot of the container. We can make n number of containers from a single Docker image similar to OOPs concept of creating n objects instances (which share common characteristics and behavior) from a single Class.

Why reduce the size of Docker Images?

Why do we need to reduce the size of the Docker image in this modern era of tech, where memory and storage are relatively cheap?

By reducing the Docker image size, we keep only the required artifacts in the final image and remove all the unnecessary data. It is also necessary because:

How to reduce the size of Docker Images

Reducing Docker Images is something we should know how to do to keep our application secure and stick with the proper industry standards and guidelines.

There are a lot of ways to do this, including:

Multi-stage builds in Docker are a new feature introduced in Docker 17.05. It is a method to reduce the image size, create a better organization of Docker commands, and improve the performance while keeping the Dockerfile easy to read and understand.

The multi-stage build is the dividing of Dockerfile into multiple stages to pass the required artifact from one stage to another and eventually deliver the final artifact in the last stage. This way, our final image won’t have any unnecessary content except our required artifact.

Previously, when we didn’t have the multi-stage builds feature, it was very difficult to minimize the image size. We used to clean up every artifact (which isn’t required) before moving to the next instruction as every instruction in Dockerfile adds the layer to the image. We also used to write bash/shell scripts and apply hacks to remove the unnecessary artifacts.

Let’s look at an example: 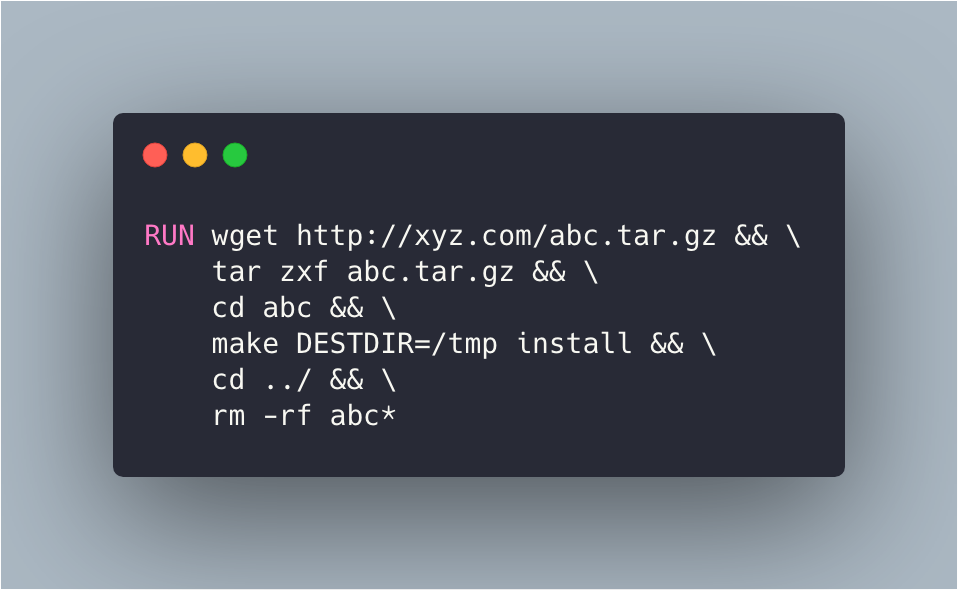 This is just the one instruction of the Dockerfile in which we need to download the abc.tar.gz file from some http://xyz.com website and extract the content and run make install.

That’s all the stuff we have to do in one instruction to reduce the size of the final image. Now we can imagine the complexity of the Dockerfile for n number of instructions.

Ohh wait..wait..wait..!!! Now we have the power of multi-stage builds with which we can reduce the size of the image without compromising the readability of the Dockerfile. 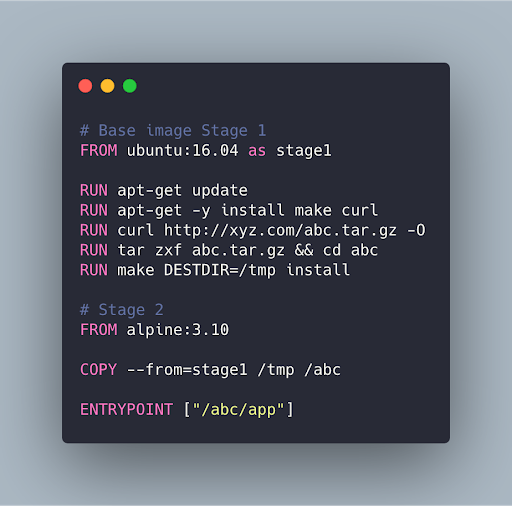 Here in this Dockerfile, we are using ubuntu:16.04 as a base image and called this stage as stage1 and executed some instructions as follows:

This way, we copied the required artifact from stage 1 to stage 2 without compromising the Dockerfile and successfully created the most optimized and reduced image. Similarly, we can use multi-stage builds to create a static build for the frontend files and pass the static files to stage 2 where we can use nginx base image to host them without keeping the large, bulky node_modules in our app which is of no use after the static build.

We can also use external Docker images as a stage and can also stop at a specific build stage. It is not always useful as we lost the previous stage intermediate containers so we won’t be able to leverage build cache in Docker. Read more about the multi-stage build from Docker official docs.