How to switch Node.js versions with NVM 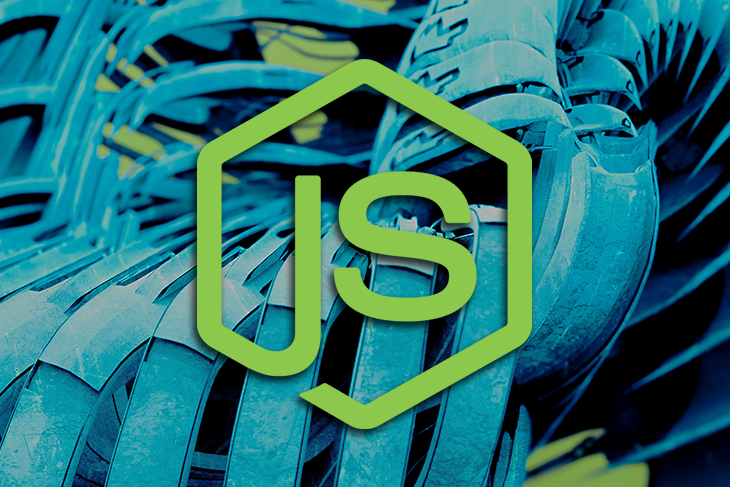 When tech evolves, especially in development, versioning issues can arise. As developers, working on multiple projects simultaneously is normal, but switching between different versions of software can become painstaking and annoying.

In this article, we’ll focus on Node.js and Node Version Manager (NVM), a tool that allows users to quickly install Node versions directly from the CLI and effortlessly switch between versions.

What is Node Version Manager (NVM)?

This also means you can install multiple Node versions onto your machine at the same time and switch among them if needed.

Developers who work with Node often encounter this scenario: working with version 12 of Node while building a project, for example, and completing and hosting the project.

However, while everything works perfectly well, a few months later a feature may need updating, and the machine used for development runs version 14 of Node.

You won’t be surprised that running npm install or yarn install to download the Node modules in this example displays errors regarding deprecated packages.

There are also instances when you could use a higher version of Node when a project specifically requires an older version.

For instance, you might use an SPFx application or an SPFx solution that uses Node LTS v14, but you are simultaneously working on another Node application like cli-microsoft356, which works on a higher Node version.

In this case, you want to switch back and forth between different Node versions, and the easiest way to do this is using a Node version manager.

Every Node project also tends to have requirements of the version it supports. Personally, I have needed to contribute to a project that supports a Node version between 10.16 and 12 while my machine ran version 14 at the time.

Without NVM, I would not have been able to contribute to the project on the same machine without removing the existing version, which would have broken a lot, or cause dual booting, which can lower performance, especially on older machines.

So, to avoid the headache, let’s see how NVM works.

Before installing NVM, you do not need a Node version installed on your machine, and, if you do have Node installed, it does not matter. Installing NVM and using it to install Node versions will work separately from the existing one.

Let’s run nvm and node on the terminal. It shows that nvm and node are not found and suggests how to install Node:

However, since we are not installing Node directly, we’ll focus on using NVM.

To install NVM, run the following command on your terminal:

cURL comes with most Linux-based operating systems. If for any reason, you do not have cURL installed on your machine, you can download it from this guide.

Running the above command downloads a script and runs it.

This script downloads the entire NVM repository to ~/.nvm and adds the source lines from the snippet below to the correct shell startup script, that is, ~/.bash_profile, ~/.zshrc, ~/.profile, or ~/.bashrc, depending on the shell program you are using.

After that, exit the terminal and reopen it.

Run nvm, you should get the following: 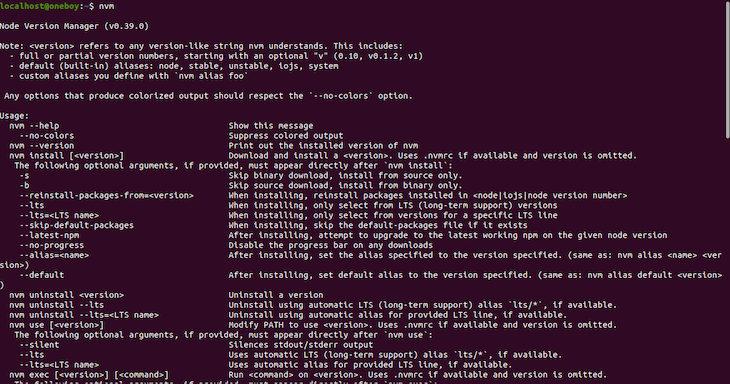 To install a Node version, simply run the following command:

Let’s start by installing the latest LTS version, which is version 16.13.0 at the time of writing this article. This is done by running nvm install --lts, which produces the below screen:

After this installs, it will automatically set the default Node version to the LTS that we just downloaded.

Whenever you download a new version, it replaces the previous one that was in use. Let’s go ahead and install version 14.18.1 with nvm install 14.18.1:

We can now view all the versions we downloaded so far; currently, we have three Node versions installed using NVM.

To see the full list, run the following command:

The first three lines show the list of Node versions with the arrow pointing to the 14.18.1 version that is currently in use; when a version is used, it displays as green.

If you happen to have more than three versions installed, of course, they will also display.

The best feature about NVM is the ability to easily switch between different Node versions.
Say we must use version 16.13.0 and then switch to 12.22.7; we can simply run either nvm use 12.22.7 or nvm use 16.13.0 to easily switch into either version we need.

Often, you may not need a particular version of Node for the projects you are working on. With NVM, you can easily remove the versions you don’t need.

To remove a version, just run the following command:

The terminal will then show that the version is uninstalled:

You must note that each version of the installation is independent, meaning that global packages on the previous versions installed will not be available on a new installation.

If you have the Gatsby CLI installed globally on version 14 of Node, for instance, when you switch to version 16 or any other version using NVM, the Gatsby CLI will not be available in the version you just switched to.

We can fix this by bringing all global packages to the new version of Node right when we first install it.

Again, know that NVM is Linux-based, meaning the installation sections and everything mentioned above will only work for Linux-based macOS or Linux-based distribution.

If you are a Windows user, check out this project by Corey Butler, which provides NVM for Windows. Everything is similar and it already has an installer here.

We have come to the end of this tutorial. We discussed what NVM is and its use cases, including managing multiple Node versions on one machine.

NVM is a convenient way to install and manage different versions of Node rather than installing directly, which restricts you to just one version, offering flexibility.