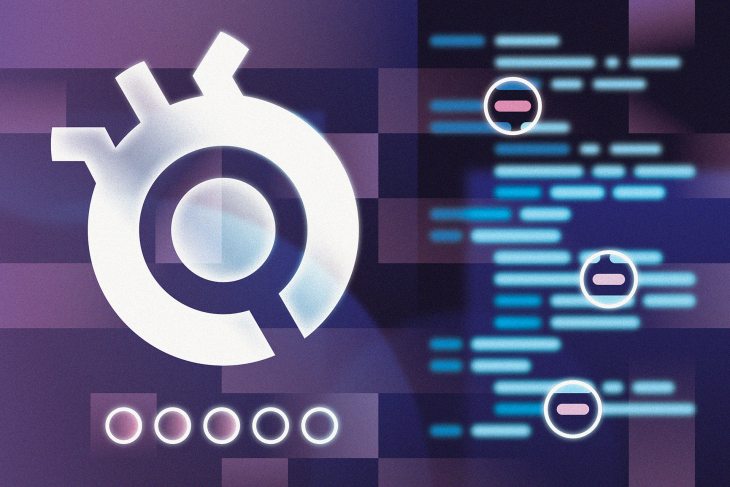 If you’re a developer, you know how painful and time-consuming it is to debug an app in a remote environment. The typical process of debugging a remote app includes build and deployment, the use of remote debugging tools to identify the issue, implementing a fix, and iterating through the process again.

Sidekick, a live app debugger, is designed to solve this issue. It provides the ability to debug in remote environments as if they were local environments. The official documentation declares Sidekick “like Chrome Dev Tools for your backend.”

As more and more apps move to the cloud, existing debugging tools and techniques are becoming inadequate. Before we dive into Sidekick, let’s have a look at the traditional techniques to debug a remote app and how they fall short.

At the time of writing, Sidekick works for the Java, Python, and Node.js runtimes. Developers can use either the Sidekick Web IDE, VSCode, or IntelliJ IDEA to set the tracepoint or logpoint.

How does Sidekick work?

Sidekick consists of three layers: the broker, agents, and clients.

As shown in the above image, the Sidekick broker controls the communication between clients and agents. Agents comprise the layer that collects snapshot data and generates dynamic logs. It is deployed together with the application to be debugged.

Agents also receive commands from the broker. When the code hits a logpoint or tracepoint, it collects data and sends it back to the clients via the broker.

Clients are the interface that allow a user to interact with agents. It is provided as either the Sidekick IDE, an IDE extension, or a Sidekick REST API. For Sidekick open source, only the IDE extensions and REST API are available.

At this time, the IDE extensions are available for VSCode and IntelliJ IDEA.

The REST API lets you apply CRUD operations over logpoints and tracepoints via the HTTP protocol. It opens up a headless way to control the agents programmatically and make use of your collected data using code.

What are tracepoints and logpoints?

The core features of Sidekick are the tracepoint and logpoint.

The tracepoint is a non-breaking remote breakpoint. Compared with ordinary breakpoints, a tracepoint doesn’t pause code execution, but takes a snapshot of the variables and the call stack when the code hits that line.

A logpoint allows developers to add log expressions to a running app. Logpoints can be added dynamically without changing the source code.

Logpoints open the way for on-demand logging to Sidekick users. Replacing traditional logging with dynamic logging has the potential to lower stage sizes, costs, and save time for log searching, redeploying, or restarting the app.

Since the Docker image is used to install Sidekick for self-hosting, we need to make sure the Docker daemon is running.

To install Docker in your preferred OS, refer to the official documentation.

Firstly, we need to clone the Sidekick repo:

Navigate to the [Project Root]/sidekick/docker, and run the following command:

The above command will setup the following local instances:

Now we can open the quick start application folder in VSCode. Select Extensions from the left menu, and search for and install the Sidekick extension for VSCode.

After the installation is completed, the Sidekick extension icon will be shown at the bottom of the left menu. 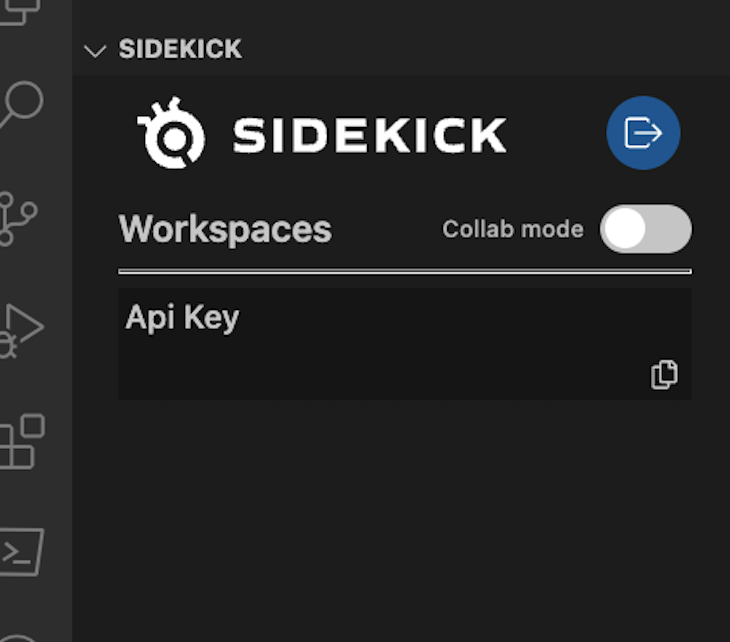 Next step, we can clone the quick start sample project:

The quick start project includes an inbuilt Sidekick Node.js agent. In the app.js file, the agent is initialized and started as below.

Run the following command to start the quick start app.

Now, we have the self-hosted Sidekick instance and quick start app running. Let’s try to use Sidekick tracepoint and logpoint to debug it.

Before adding a tracepoint, we need to select the sidekick-demo-app in the Applications panel in the left menu.

Then open app/routes/index.js in VS Code, add a tracepoint by right-clicking line 10, and choose Sidekick > Add Tracepoint. A tracepoint icon will be added to the left of the line:

Then, open a browser and navigate to https://localhost:3000. This will trigger the app and output of the tracepoint events.

Open the app/routes/index.js in VS Code, and add a logpoint by right-clicking line 10 and choosing Sidekick > Add Logpoint. A logpoint icon will be added to the left of the line, as well as the Logpoint UI.

You can configure the Logpoint in the following ways: 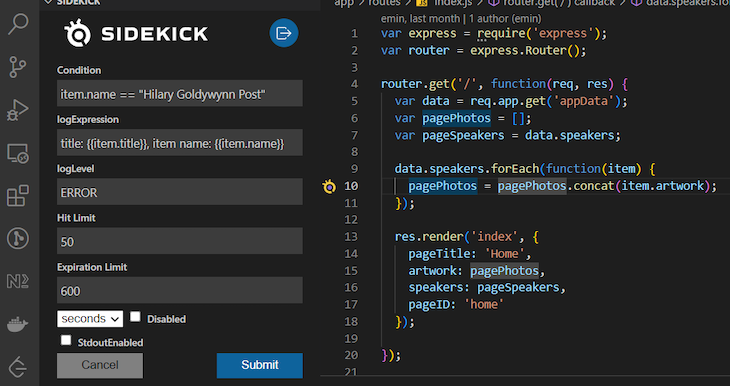 Exposing the live debugger via the REST API

Sidekick exposes all of its live debugging functionality via REST endpoints. For the self-hosted Sidekick, you can see the API’s swagger interface at the URL
http://localhost:8084/swagger-ui.html.

To use the API, you will need to enter the apiKey for authorization. The apiKey can be found in the Node.js agent configs in app.js.

The API endpoints include the standard CRUD for tracepoint, logpoint, and webhooks.

Sidekick agents are lightweight and add almost no overhead to the application execution. In Sidekick’s recent benchmark blog, tests were carried out on the passive impact of Java agents deployed together with demo applications. The test result shows the overheads of all three agents are negligible.

Sidekick open source was just released in August 2022, and its commercial version was launched as a standalone product in 2021. At the time of writing, the Sidekick open source GitHub repo has 1.5K stars and 57 forks. As a new tool, it will take some time to mature and be recognized by developer communities.

The Sidekick repo in GitHub is actively maintained, and issues raised received a prompt response.

Sidekick provides a viable solution to address the pain points associated with live debugging and logging needs. It is secure and lightweight, and provides non-intrusive debugging capabilities unlike traditional remote debugging tools.

I hope this article raises your interest to give this new and promising tool a try.

Yan Sun Follow I am a full-stack developer. Love coding, learning, and writing.
« What is product differentiation? Definition, strategies, and examples
Update vs. FixedUpdate vs. LateUpdate in Unity »