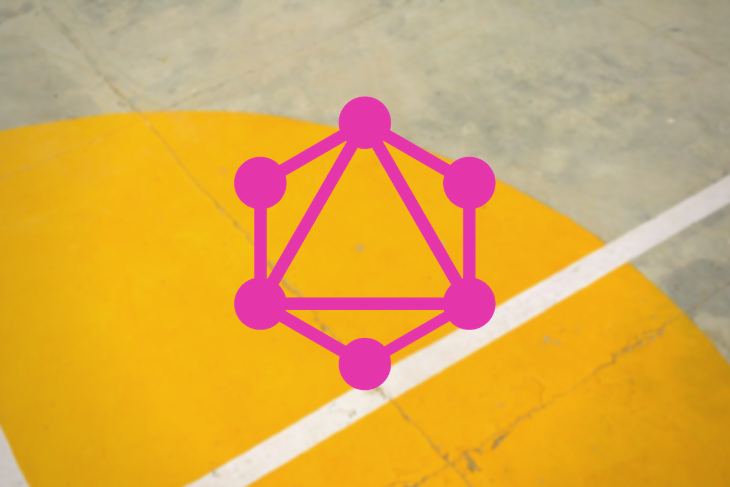 GraphQL is a popular and widely used query language that bills itself as an alternative to the REST approach. One of the reasons why GraphQL is so well-regarded in the developer community is its thriving ecosystem. There are so many tools that make learning and using GraphQL easier. One of these tools is GraphQL Playground, a GraphQL integrated developer environment (IDE) that helps improve development workflows.

In this guide, I’ll introduce you to GraphQL Playground and walk you through some basic concepts to help you make the most of your GraphQL development experience.

What is GraphQL Playground?

GraphQL Playground is a GraphQL IDE created and maintained by Prisma. It’s built on top of GraphiQL with additional features such as automatic schema reloading, support for GraphQL subscriptions, the ability to configure HTTP headers, and more.

GraphQL Playground ships with basic features such as syntax highlighting, intelligent type ahead of fields, real-time error highlighting and reporting for queries and variables, documentation explorer, search, markdown support, and so much more.

GraphQL Playground extremely flexible. It can be used as a desktop app on your computer, a module on your front- or backend project, or online with the web version. We’ll dive into each use case below.

Installing as a desktop app

The GraphQL Playground desktop app needs to be installed on your computer. If you’re using Windows, you can download it directly. If you’re using Mac or Linux, you can install it by running the following command on the terminal.

Installing as a module on your project

GraphQL Playground can also be used as an npm module on your project. Installing the package will enable you to interact with your GraphQL API during development. Later, we’ll demonstrate how to add it as a component on a React app or as middleware on a Node project.

Add GraphQL Playground to your project by executing the following command. 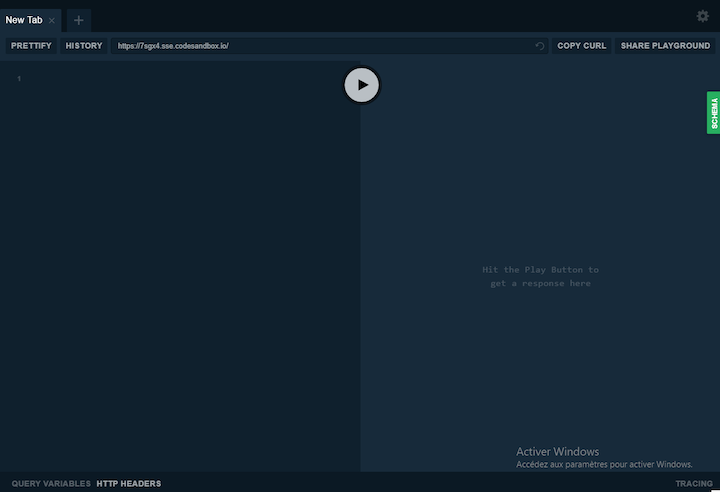 For this tutorial, we’ll use this GraphQL server to interact with the GitHub API. Here is the endpoint: https://7sgx4.sse.codesandbox.io/

You can send a GraphQL query or mutation using GraphQL Playground. The latter has an autocompletion feature and helps you ride through your schema. 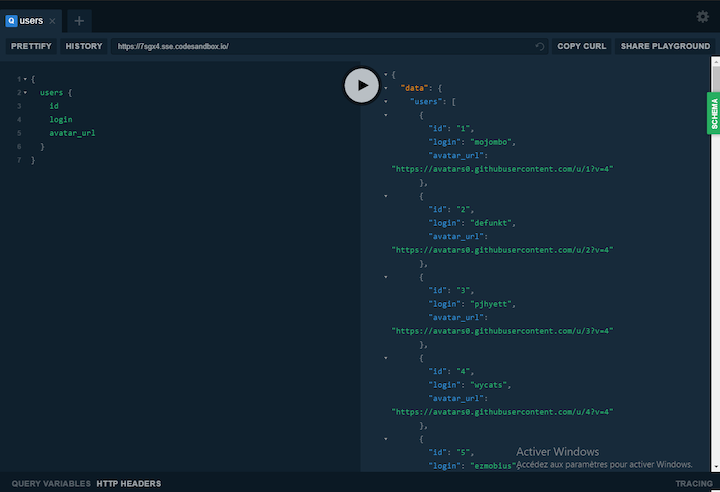 As you can see, GraphQL Playground helps in sending requests to the GraphQL server and facilitates the retrieval of data as well.

GraphQL Playground can be used like GraphiQL to send queries with variables. 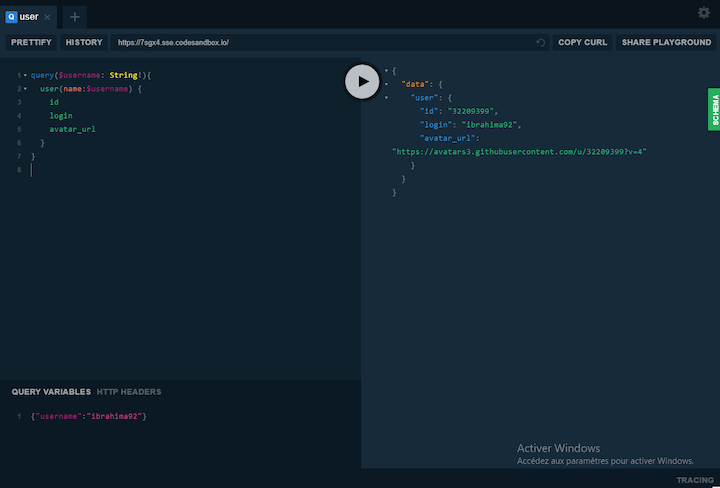 Here, we use the “QUERY VARIABLES” tab to add the variable username, pass it as a parameter to the GraphQL query, and use it to fetch data.

The API documentation tab is one of the most exciting features of GraphQl Playground. It enables you to preview GraphQL queries, GraphQL type details, and a single field of a given schema. 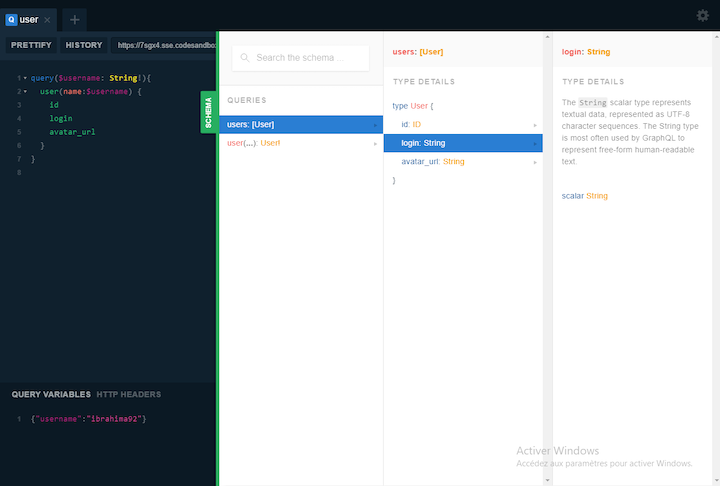 The example above was made with the web version. However, GraphQL Playground installed as a module offers a schema tab that enables you to preview the whole GraphQL schema and download it as a file. 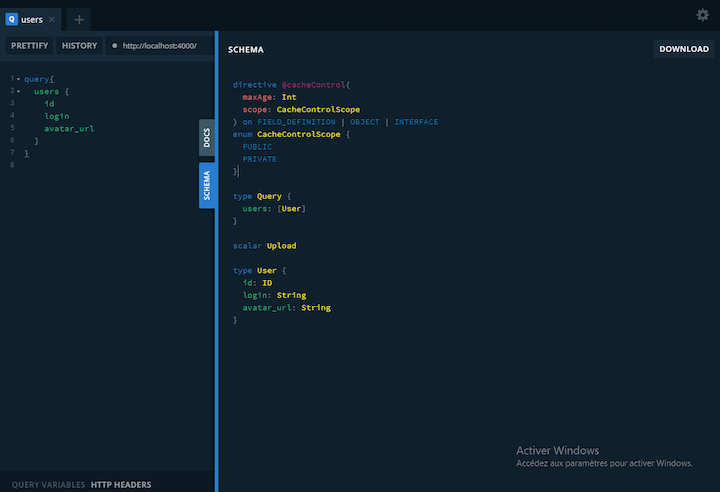 This comes in especially handy when you have several nested GraphQL schemas.

Unlike GraphiQL, GraphQL Playground allows you to send requests with HTTP headers, such as a token needed to authenticate a user or some other kind of authorization. 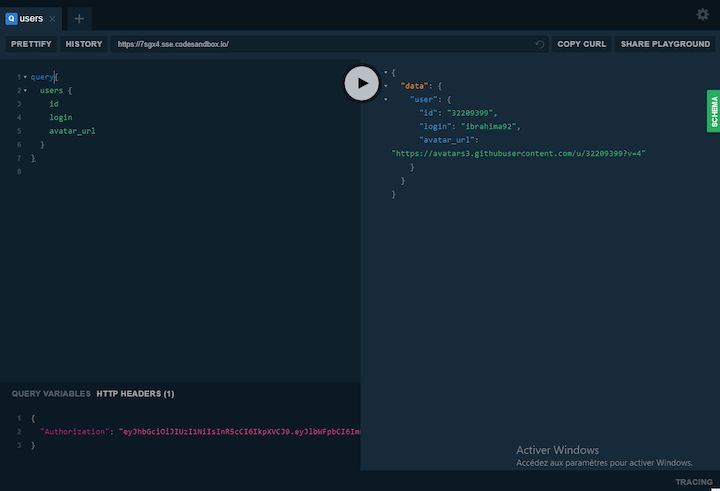 Make sure to first switch the tab to “HTTP HEADERS,” and then add your headers as a JSON object. By the way, you can add more than one field.

Embed GraphQL Playground on the frontend with React

You can use GraphQL Playground as a React component to interact with your GraphQL API.

First, create a fresh React app by executing the following command on the terminal.

Next, install the graphql-playground-react library, which allows you to use the tool as a component. You’ll also need react-redux, which is the glue between the GraphQL Playground library and the React app.

But first, be sure to browse into the folder that holds the React app.

Once you’re in the right folder, run the following command to install the packages.

Open the folder on an IDE or text editor and add the following code to the index.js file.

Here we start by importing the Provider component from react-redux, which enables us to connect the store of GraphQL Playground to Redux — or, to be precise, the React app.

With that in place, we can now display the Playground component and pass as props the endpoint of the API we want to play with.

Run the following on the terminal.

Or, if using npm:

You should see your playground up and running in the browser. 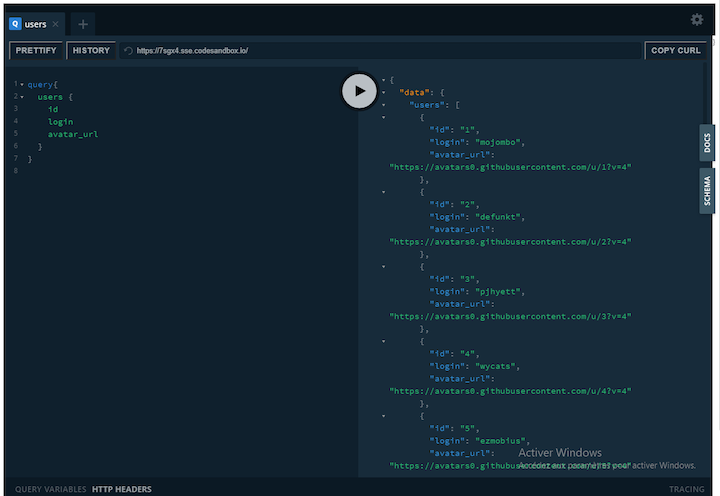 If you get an error after running the start command, just install this dependency of graphql-playground-react.

It’s great to have GraphQL Playground as a component to preview your API, but it’s even more useful to have it on the backend when developing a GraphQL server or API.

Embed GraphQL Playground on the backend with Node

GraphQL Playground can be embedded on many Node.js frameworks. For this tutorial, we’ll focus on Express, but the process is the same for other frameworks.

To embed the tool on Express, we need to install the graphql-playground-middleware-express package and use it as middleware for the API.

Next, run the following command on the terminal to install the package.

Once the library is installed, create an entry file for your server. We’ll name it index.js (you can name it whatever you want).

Update index.js with the code below.

Here we have a very simple GraphQL API that returns a string. However, the most important thing is expressPlayground, which is the playground that needs to be used as middleware. Once the page loads, it will show the GraphQL Playground to the user. GraphQL Playground is a great tool that helps your app interact with GraphQL API and offers a better workflow. While it’s a different beast compared to GraphiQL, it’s definitely a tool to use on your next GraphQL API project.

Ibrahima Ndaw Follow JavaScript enthusiast, full-stack developer, and blogger who also dabbles in UI/UX design.
« Why you should be using useWorker
Dynamic type validation in TypeScript »