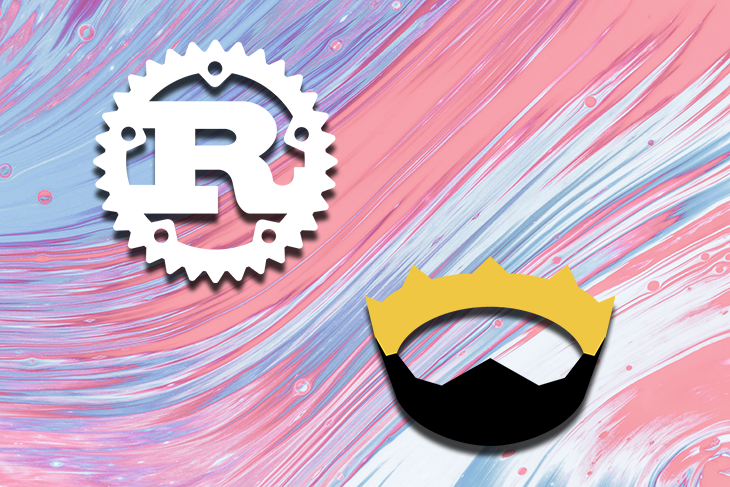 Rust and Nim have many similarities and differences in aspects of design, syntax, use cases, and more, making them viable alternatives for one another.

This article will give you an overview of the Rust and Nim programming languages, as well as their pros, cons, and features. Let’s get started!

Rust is a multi-paradigm, statically-typed, general-purpose programming language. It’s most popular for its performance, type safety, memory safety, and concurrency.

The Mozilla Foundation built Rust, and, since its release, the developer ecosystem has been increasing, making the language the most preferred in many surveys, including the annual Stack Overflow developer survey.

Rust is a feature-rich programming language. C bindings, memory safety, and expressivity are only a few of the selling points of the language. We’ll go over these more in-depth below.

Rust was designed to breach C’s technical debt; thus, Rust is interoperable with C. In other words, you can call C code from Rust and interact with existing libraries and code bases. Rust uses a foreign function interface for communicating with C, and you can retain your favorite Rust features for safety.

In this example, Rust’s main() will call trigger_callback() in C, which would, in turn, call back to callback() in Rust.

Memory safety is undoubtedly Rust’s selling point. Unlike other programming languages like Nim that employ garbage collectors (we’ll get to this later), Rust uses a borrow checker and a custom ownership model to guarantee memory safety. The borrow checker ensures that programs use memory efficiently and obey the ownership rules. 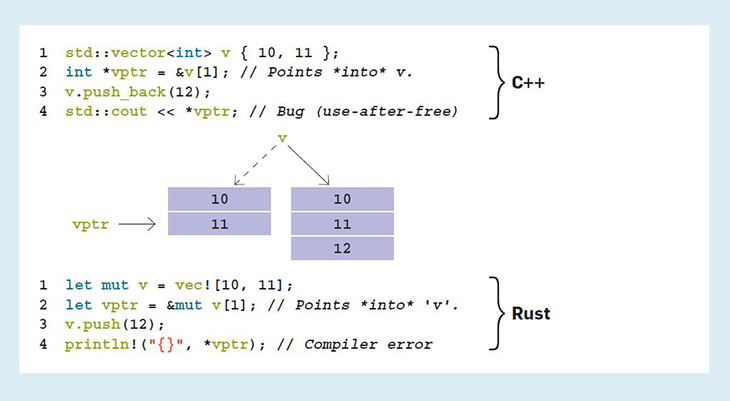 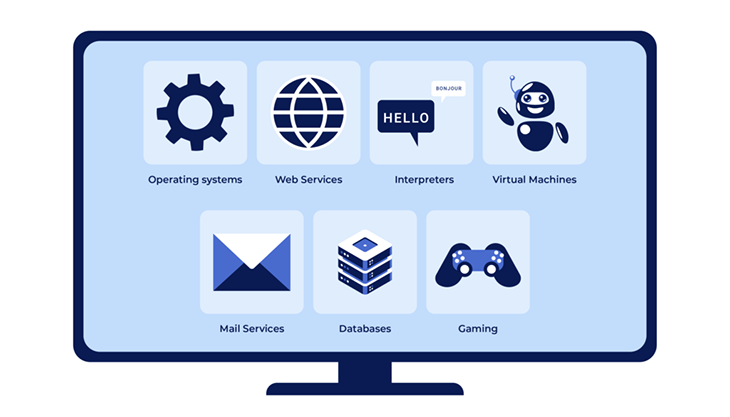 Rust is a big contender in the systems programming field. Rust’s low-level expressivity gives the language an edge for interacting with embedded systems.

Rust is home to many web frameworks, and projects are adopting Rust as their server-side programming language to harness Rust’s safety, performance, and more. You can use frameworks like Yew and Moonzoon for the frontend of your web app and Actix, Rocket, Warp, or Tide for your app’s backend. There are ORMs like Diesel and SQLX, as well as database drivers for a full-fledged experience.

You can resort to using Rust for building libraries and tools for other languages. Also, Rust is suitable for building tools like browsers, operating systems, networking, and services requiring low-level resource interactions.

Rust is a preferable language for building safe programs you want to support over time. You’ll hardly experience in-production bugs if you use Rust since Rust provides type safety and memory safety.

Also, Rust is a multipurpose, general programming language, meaning that you can use and run Rust in multiple environments and use Rust for many use cases. Rust is very expressive and the ecosystem is constantly growing to support more use cases and functionalities.

Finally, Rust supports most of the features you’ll look forward to in a modern programming language. Rust is highly expressive; the language supports generics, rich patterns, syntax, and programming in multiple paradigms.

On compilation, Rust code outputs larger binaries compared to similar languages like C and C++ where file size is optimized for portability. Also, the Rust compiler is considerably slow since the borrow checker has to scrutinize programs for memory safety before compiling and executing programs.

Since Rust has newer concepts in its design and implementation that you can’t find in other languages, the experience of learning Rust is slow and developers have to take more time to learn the facets of Rust to write safe and efficient code.

Rust has a limited developer pool, owing to factors like the time it takes to master the language, the age of the language (that reflects in the ecosystem of packages and build tools), and other general cons.

Getting started with Rust

Rust also has a clean syntax; anyone can understand a simple Rust program. Here’s a simple “hello world” program in Rust.

Every Rust program must have a main function — the program’s entry point. The println macro writes the text parameter to the console on execution.

There are lots of use cases, for Rust including web development. The Rust book is recommended if you want to start writing Rust programs.

Nim is a dynamic, statically-typed, compiled systems programming language with a relatively concise language. Nim’s design is inspired by Ada, Python, and Modula, with more functionalities every developer would love.

Nim is also community-oriented, which is arguably unlike modern programming languages like Go, TypeScript, and Rust. Overall, Nim also has good governance.

Nim is impressively interoperable with C and C++ over a foreign function interface. You can compile Nim code to C, C++, and JavaScript, and run it on any environment as you please.

Since Nim is portable and interoperable, companies and developers that want to harness Nim’s features can quickly join existing developers in the Nim ecosystem with the language features.

In this example, the Nim compiler will compile the logic.c file in addition to the nim file and link both into an executable, which outputs 10 when run.

Nim is undoubtedly one of the most expressive programming languages. Nim’s syntax is easy to read and understand, especially because popular languages inspire its syntax.

Nim has multiple data types that you can use for numerous purposes, and the language supports programming in functional and object-oriented paradigms.

Also, Nim is self-contained (the Nim compiler is built in Nim), with a macro system that provides functionality for manipulating the abstract syntax tree.

Although Nim is a relatively new language, developers and companies are building with Nim and investing in the language already. Here are a few of the widespread use cases where the Nim programming language thrives:

To build functional games, you can use game development engine packages, frameworks, and emulator packages in the Nim ecosystem.

Nim is a great server-side programming language, considering factors like performance, ease of use, and many other metrics.

Since you can transpile Nim code to JavaScript, you can also explore using Nim on the frontend of your web app.

Nim is widely used for developing graphical user interfaces (GUIs), and toolkits are similar to the GUI packages in other languages.

You can build cross-platform GUI apps, web apps, interactive command line interfaces, and more with packages like the Gintro library, inspired by the GTK toolkit. Nim’s ecosystem is increasing, and there are packages for the numerous use cases. Check out this resource by Nim contributors for a list of packages in the Nim ecosystem.

Nim’s interoperability is one of the pleasantries you’ll enjoy if you use Nim for your projects. If you choose to change languages, you can easily transpile your code to your preferred language if Nim supports it. Eventually, you can write Nim code for more use cases and environments.

Nim is a general purpose, totally open source language with many production-ready libraries in its ecosystem and since the ecosystem is fast pacing, sooner to later, you’ll be able to use Nim for any application the community supports.

One of the reasons developers dread programming languages is the learning curve. Nim is highly expressive, concise, and easy to use. The learning curve of the language isn’t as tasking as languages like Rust and C++ plus you get the same level of performance and features.

Nim is new, and although it’s a modern programming language with so much to offer, the language is not so popular. This means that hiring developers and finding support in the Nim ecosystem can be an uphill task, and using Nim in production for critical applications may not be the best solution.

Nim doesn’t have rich support for concurrent programming and threading like Rust. Concurrency is increasingly important for many use cases and Nim’s lack of support limits the performance developers can gain from using Nim.

Getting started with Nim

Nim is simple and elegant, and the success of other languages inspires its syntax. Printing in Nim is very similar to printing in bash. Here’s a simple “hello world” program in Nim:

The echo keyword prints the text to the console. You can check out the Nim documentation or the Nim by Example resource to start writing Nim programs.

Rust and Nim are modern programming languages designed to solve similar problems, and they share similar pros and cons, designs, and principles.

Rust is more popular than Nim, which you can credit to Mozilla. Meanwhile, Nim isn’t backed by big companies, and barely any tech influential tech figure has admitted to using the language in production.

Rust and Nim are statically-typed and very expressive, and they support programming in multiple paradigms, making them suitable for the same purposes.

Here’s a comparison table that overviews the similarities and differences of the languages.

In my opinion, you should use Rust where you can and Nim where you must. This is because of the developer pool and the state of Nim. It’s easier to find Rust developers than Nim developers, and the Rust ecosystem is considerably more significant than Nim’s, with more support for popular software you’ll use in development.

Nim is a promising language and might gather much traction soon, but in the meantime, you’ll want to need software that’s relatable to a broader amount of people, and that’s why I choose Rust.

Suppose Rust and Nim were both of the same maturity. In that case, I’d go for Nim because it’s easier to get a lot from the language, like performance, without stressing about a borrow checker and many other disturbing concepts you’ll have to learn as a Rust developer to write safe Rust code.

Rust and Nim are excellent programming languages with modern programming features and performance.

In this tutorial, you learned about the Rust and Nim programming languages, their features, use cases, pros, cons, insights to help you get started, a comparison between the two languages, and my personal opinion.

Solomon Esenyi Follow Python/Golang developer and Technical Writer with a passion for open-source, cryptography, and serverless technologies.
« Applying Atomic Design to your Next.js project
What does it mean to be agile in product management? »