1 week with GitHub Copilot: Building an app using only Copilot 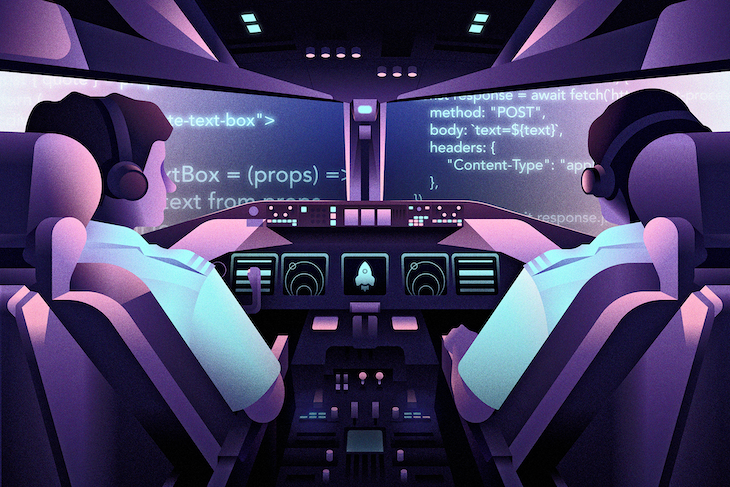 GitHub Copilot is the newest tool developed by GitHub to autocomplete code with the help of OpenAI.

Copilot generates smart code suggestions with context, such as docstrings, code comments, function names, or even file names. It then uses all this information to suggest code snippets that developers can easily accept by pressing the Tab key on a keyboard.

It understands Python, JavaScript, TypeScript, Ruby, and Go, as well as dozens of other languages because it’s “trained on billions of lines of public code,” per the Copilot website. And while it’s currently still in its limited technical preview, those interested can sign up to join a waitlist to try it out.

In this article, we’ll explore Copilot’s main functionalities, how to build a simple application using only Copilot, and its pros and cons.

When continuing to write code and adding more comments, Copilot begins to understand the whole context of the code through its AI capabilities. With the context, it autocompletes comments mid-sentence.

For example, by adding a function, it generates a whole comment and a function; in this case, it figured out the last function should be a multiply function, as seen below.

Another cool feature of Copilot is the ability to see 10 full-page suggestions, instead of a single one-liner suggestion, and choosing which suits the code best.

To do that, press ^ + Return on a Mac keyboard or Ctrl + Enter on Windows to open a list of suggestions, as shown below.

Can you build an application with only GitHub Copilot?

To do this, I had a few rules to follow to see how much benefit I could receive from Copilot.

First, I could not search the internet if I encountered a problem, including using Stack Overflow or documentation. This let me see whether it was possible to solely rely on Copilot’s suggestions to create working code.

The second rule was that I could not write any new code myself. I could, however, write comments, variables, names, and function names to trigger Copilot’s suggestions. Similarly, I could also make small edits to the suggested code.

And finally, I could trigger the list of Copilot suggestions and accept one, since this is a built-in feature.

I chose Next.js and React to build this project since they are the tools I am most familiar with to help me better evaluate Copilot’s performance.

Since React makes it fairly painless for developers to build applications, and I wanted to see how Copilot would manage React components.

For Next.js, it provides a good starting point where I didn’t need to spend a lot of time setting everything up, and it has built-in back-end functions, making it useful to call different API endpoints without triggering CORS errors.

While Next.js might seem too powerful for this small project, there’s no need to install other dependencies beforehand and its integrated, easy-to-use API functions make it a good choice for this challenge.

Since I didn’t know what format the return value would be, I let Copilot write it and see what it could return.

To create two endpoints using Next.js, I created two files in the api folder: get_quote.js and get_sentiment.js. Next.js could then create these endpoints based on the file names. All that was left is to define was the handler functions inside those files, and I let Copilot do that for me.

For the get_quote endpoint, I wrote a comment and chose a good suggestion:

The suggestion I selected was the following:

This suggestion worked. Almost all of the other suggestions that I checked were either broken or required an API key that I didn’t have. This could be because Copilot was trained on open source GitHub code, and some endpoints might be outdated already, which can be frustrating.

Also, this endpoint returns the quote of the day, which means for every call, I receive the same quote for the current day, which was not what I was expecting. Instead, for every endpoint call, I wanted to receive a different random quote.

For the second part of this endpoint, I needed to create a handler for the endpoint that calls the function Copilot already generated. The handler is the function that Next.js calls when the client requests the endpoint.

To do this, I declared the function with its name to see whether Copilot would suggest the correct implementation or not.

And Copilot surprised me again. Everything seemed correct.

For the get_sentiment function, I chose Copilot’s suggestion and didn’t have to change anything.

I input the following:

Then, Copilot suggested the following code, which I used:

However, for the endpoint part, I had to add .status(200), similar to the get_quote endpoint.

Here is what I provided to Copilot:

And then, Copilot suggested the following, which I selected:

Copilot managed to provide us with a working solution again, suggesting the right handler and calculating what the get_sentiment handle function needed to return. This suggestion looks similar to the one we had previously.

For the frontend, I needed a couple of specified React components and a React controller component with a button. The two specified components needed to display text: one for quote text and another for sentiment text.

I began with the QuoteTextBox component that would showcase a simple quote; I added the following comment to see what Copilot would suggest:

Copilot suggested a simple function component, which I did not have to change at all.

To build the sentiment text box, I added the following comment:

For this text box, it was a bit trickier to find the right suggestions, and I had to scroll through most of them until I found one that would work with my code:

It’s important to clearly understand what to expect from Copilot because it is only a tool, and developers can’t just rely on the first suggestion it gives.

I still needed to come back to this component to map what the API returns to readable text. For example, if the web service returns neg, I needed to map it to Negative.

I started by inputting the following:

Then, Copilot brought this suggestion:

The controller component suggested by Copilot appeared to be pretty basic; it lacked the API calls and didn’t use correct props for SentimentTextBox. However, Copilot did provide the correct structure, it just needed some tweaks to finish it.

Then, I just needed to add functions to the controller component. Instead of passing quote, sentiment, and onClick, I asked Copilot to generate them. I also needed some Hooks to store the sentiment and quote data received from calling the APIs.

For Hooks, Copilot figured out right away what I needed. To trigger the suggestion for the first Hook, I began typing a comment and Copilot suggested the correct Hook.

However, for the second Hook, I didn’t even need to type a comment. I accepted the first Hook suggestion, moved to the next line, and Copilot suggested the second Hook immediately.

While the endpoints were correct, I still needed to make some changes to make them work. I had to ask very specifically what I wanted, otherwise, Copilot started suggesting different web services.

I wanted it to just call endpoints that were already created. Furthermore, I need to specifically call the getSentiment endpoint when I received a quote and map the sentiment to human-readable text.

And this is my final version after some minor changes from my side:

After experimenting with my simple quote-generating app, I found that Copilot gives enough help to create a simple application.

I didn’t have high expectations and initially thought I would need to change a lot of code to make the application work.

However, Copilot surprised me. In some places, it gave me nonsense suggestions, but in other places, the suggestions were so good that I can’t believe Copilot made them.

To recap my experience with Copilot, I’ve compiled the pros and cons of working with it so you can decide whether Copilot is something you can use daily or not.

The main advantage of using Copilot is that it provides autocomplete on steroids. As an autocomplete tool, I believe it is currently the best on the market; there is nothing even close to as useful as Copilot.

Copilot also shows developers multiple ways to solve different problems that may not be so obvious. When in need of a code snippet, the 10 suggestions functionality is great and can often be used in place of Stack Overflow for efficiency.

In all, Copilot is fun to use. For all the tech geeks, it is something new to play around with and it makes daily work a bit more interesting.

While its functionality provides greater efficiency, users must remember it’s a tool, not a human developer replacement. Because Copilot is not a panacea, users cannot solely rely on it for all their code. Most of its suggestions require changes to fit specific needs.

And finally, I noticed Copilot was suggesting to use React classes for small components with little logic instead of functional components with Hooks. Because it was trained on openly available code on GitHub, Copilot might provide some depreciated suggestions for coding.

GitHub Copilot is good with small tasks; when you start asking it something more complex, you often get nonsense. Nevertheless, it is a very good tool for both beginner and experienced developers alike.

2 Replies to “1 week with GitHub Copilot: Building an app using…”