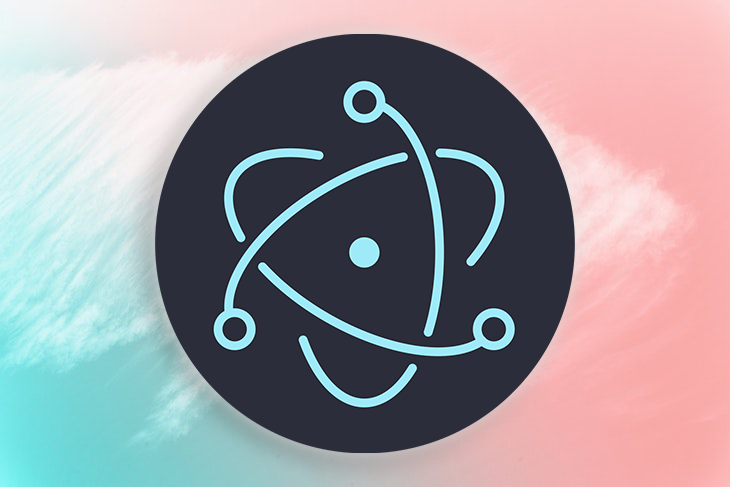 A while back, I began working on a side project called taggr, a completely offline, interactive photo exploration app. Developing taggr required me to navigate up from the lowest level of app complexity, trying out multiple architectural approaches and exploring the limitations of each.

In this article, we’ll discuss the trade-offs of different architectural approaches for building desktop applications with Electron. We’ll analyze the shortcomings of each and introduce an architecture that aims to tackle them.

The blueprint presented in this article is the outcome of an ongoing effort to find an approach that enables me, a solo developer, to manage the complexity of the app and meet performance requirements by leveraging standard web tooling. Let’s dive in!

Note: You can follow along with this GitHub repository.

In the last few years, JavaScript usage has dramatically increased within the browser realm, largely with the help of libraries and frameworks like React, Vue, and Angular. Similarly, we’ve seen JavaScript grow beyond the browser with Node.js, Deno, and React Native.

Electron embeds Chromium and Node.js in its binary, enabling web developers to write desktop applications without writing native code. Electron implements a multi-process model composed of the main and renderer processes, which is similar to the Chromium browser.

Each application’s window is a render process, which isolates the code execution at window level. The main process is responsible for the application lifecycle management, window management or render process, and native APIs like system menus, notifications, and tray icons.

Each app is composed of one main process and a variable number of render processes. Render processes can be used for JavaScript code execution and can be hidden without a UI.

Note: Electron is not the only option for building cross-platform desktop applications. Other alternatives offer less resource consumption and lighter executables, but none share the community, learning resources, or the widespread adoption of Electron.

Getting started with Electron

If you aren’t already familiar with Electron, it’s pretty easy to get started, especially because knowledge of Node.js and JavaScript is transferrable.

Electron provides abstractions and a familiar language, reducing the time to market and development costs. Essentially, what Electron does for desktop app development is similar to what React Native does for mobile development.

Electron also manages building and deploying app updates, making it easy to keep cross-platform apps in a synced version. You can achieve this with auto-updates and by loading remote assets at runtime.

However, the benefits of Electron are not without their trade-offs. Electron ships with Chromium and Node.js environments, causing an Electron app to consume more resources than its natively implemented counterparts. As a result, there are mixed opinions about Electron’s viability.

Let’s examine the high-level architectures of three fictional apps with varying complexity. Bear in mind that our app analysis does not aim to be exhaustive, rather, it aims to tease potential apps that you can build with Electron.

Let’s start with a low-complexity app. For our example, we’ll consider packaging a webpage as a desktop application. Examples could include instant messaging apps, data analysis dashboards, and online streaming apps.

Many businesses provide desktop versions of their successful web-based apps, making ours a common use case. We’ll use Electron to run the app on Chromium, eliminating unnecessary polyfills and providing a unified UI instead of a heterogeneous browser landscape.

As an example architecture, we’ll use a desktop app for the Telegram chat web app. Electron will act as a wrapper for the existing web app without requiring any changes to the backend. 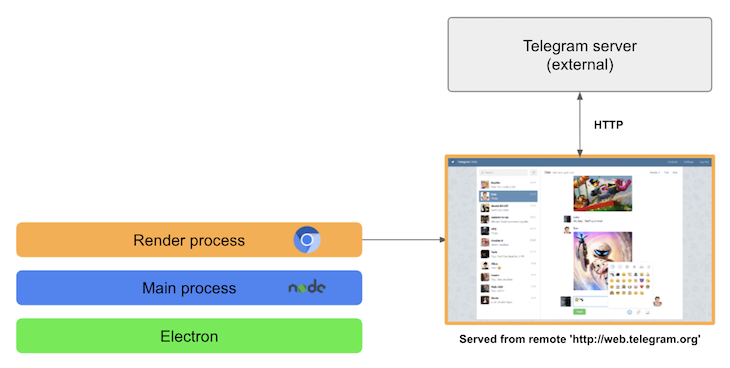 Setting up Electron is easy for this type of app! There are no changes needed at the web app codebase level.

A music streaming app like Spotify, which offers offline streaming support using a local cache, is a typical example of an app with a medium level of complexity. The desktop app can use Electron to build a local cache layer.

Let’s imagine that our streaming app plays a song of the day. If there is no internet connection, it will serve the available cached song. 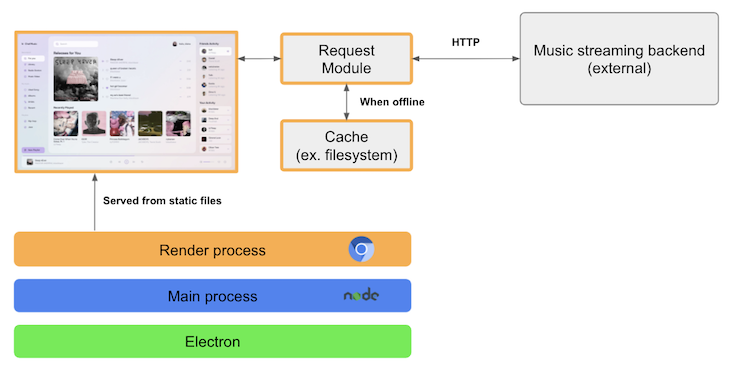 As outlined in the schema above, the UI will be served from local assets instead of a CDN, and the request layer has to be customized to support caching. While the example is relatively simple, the code-sharing and caching requirements will eventually increase in complexity, requiring custom Electron code.

For the highest level of complexity, let’s look at a batch image processing app like sharp. The app must be able to process thousands of images and work entirely offline.

Offline apps are significantly different from the previous two examples. Specifically, the typical backend workloads, like image processing, will execute within Electron by creating an offline application.

For the architecture proposal, let’s consider the offline image processing app described above. 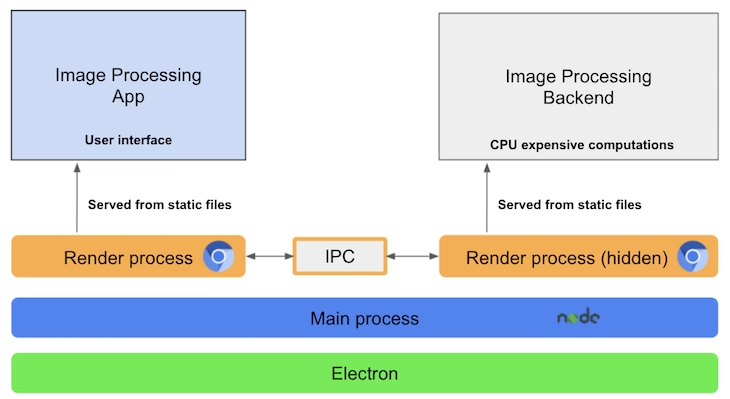 The schema structures the app following the Electron documentation, which brings some limitations. For one, there is noticeable performance degradation when running the long-lived, CPU-intensive operations in a hidden renderer process.

Additionally, coupling the business logic and transport layers to Electron APIs limits the options to reuse standard web development tooling. Communications between the main processes and renderer processes use IPC, which requires a main process roundtrip when communicating between two render processes.

If your app falls in the low or medium-complexity categories, congrats! Many of the headaches that arise in offline apps won’t apply to you. However, if your app requirements fall in the high complexity range, there is still hope!

When we consider issues in offline apps like performance degradation, roundtrip communication between render processes, and the overall developer experience, we need a specialized architecture: 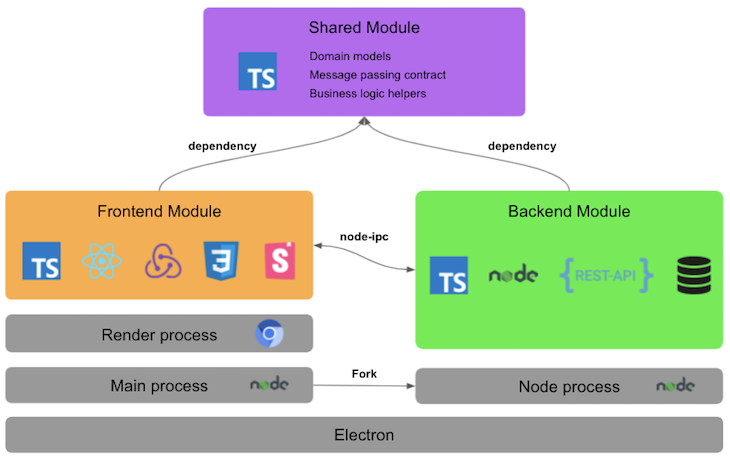 The proposed architecture is built on the following pillars:

Let’s go through each of the modules in detail!

Note: parts of the stack are chosen purely due to personal preference and are interchangeable. For example, you can swap TypeScript for JavaScript, React for Vue, Redux for MobX, or npm packages for code sharing instead of Yarn workspaces. As long as the pillars mentioned above are respected, you have freedom of choice across the stack.

The shared module is responsible for the code and types shared by both the frontend and backend modules. It enables you to develop both modules as separate entities while still sharing the domain-relevant code and types.

Codesharing is achieved using Yarn workspaces, a simple alternative to publishing the module as an npm package, releasing, and versioning it.

The frontend module is responsible for all things UI. It contains the components and animations of our app but not the business logic. In production, Electron serves it from generated static files.

The backend module contains the backend codebase and the Electron setup code. The business logic and long-running operations, like image processing, will run in a separate Node.js process so that the UI doesn’t suffer from degraded performance.

async communication is best suited for short-lived operations. The frontend can wait until the backend processes the message to get the result right away.

Event-based communication is better suited for long-lived operations, like batch processing. As the task processes in the backend, it sends events that will modify the frontend’s app state in Redux. The backend can asynchronously complete long-running tasks and periodically update the progress displayed by the UI.

Electron is a great choice for building cross-platform desktop applications using different web technologies. Although Electron is easy to use in low-complexity apps, performance and developer experience limitations will surface as the complexity increases.

The proposed architecture aims to provide a sound conceptual foundation for high complexity apps. Of course, it may need to be extended depending on the use case, but I’ve found that it serves as a good foundation for many types of apps.