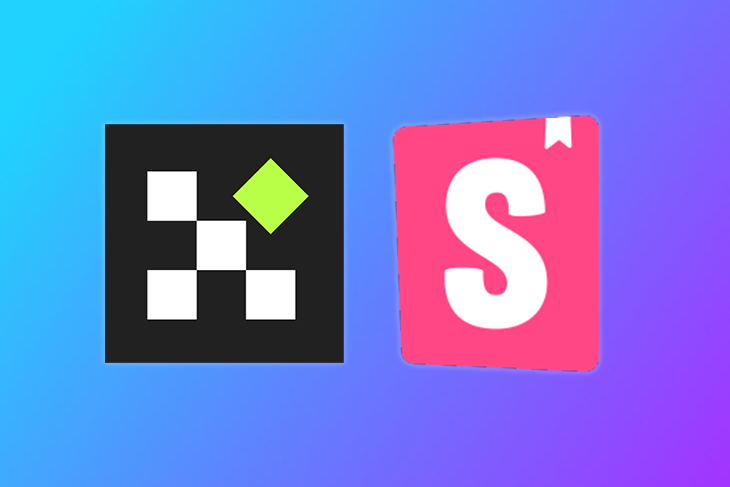 Testing is a vital part of modern-day software development; in fact, the TDD paradigm, short for test-driven development, stresses the importance of writing tests before writing even a single line of code.

For backend applications, this might be straightforward; however, testing UI-centric applications can be quite tricky. Here, Lost Pixel comes in handy; Lost Pixel is an open source tool that helps identify regressions in the user interface with every push that we make to the application.

In this article, we’ll learn how to test a few Storybook components using Lost Pixel. Let’s get started!

What is Lost Pixel?

Lost Pixel’s approach is quite different from snapshot testing using Jest, in which the entire component is represented in its verbose, textual format, and then compared with the changed version.

We can think of Storybook as a platform that lets us code the building blocks for our applications independently of each other. When we finally put all of them together into meaningful applications, we’ll encounter fewer bugs and surprises in behavior. In addition, Storybook provides free documentation of all our components. To get more clarity on how all of that works, let’s build a hands-on project with Storybook, React, and Vite.

Setting up Storybook with React

Storybook with React and Vite

We’ll follow the prompts on the screen to create a React project with JavaScript. Once that finishes running, we can run the project that we just created by going into that directory and starting the dev server: 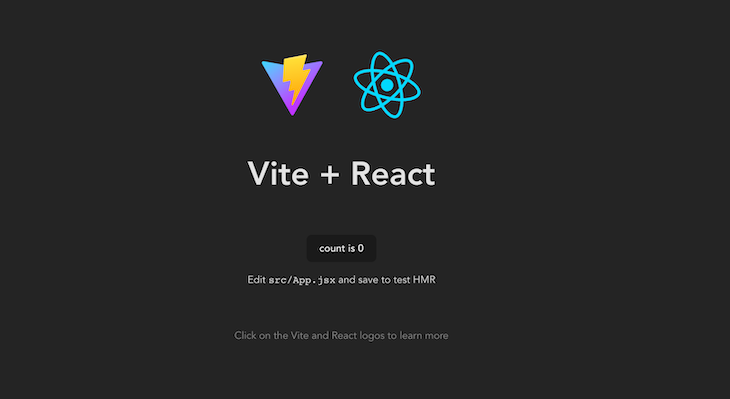 Now, we’ll set up Storybook in this repo by running the following code:

The command above will add the necessary files and make the required changes to the package.json for Storybook to work. If you get an error like the one below, select yes to create a new .npmrc file in the repo:

Next, we can run Storybook using the command below:

The command above will bring up the Storybook homepage on http://localhost:6006/, which looks like the following image: 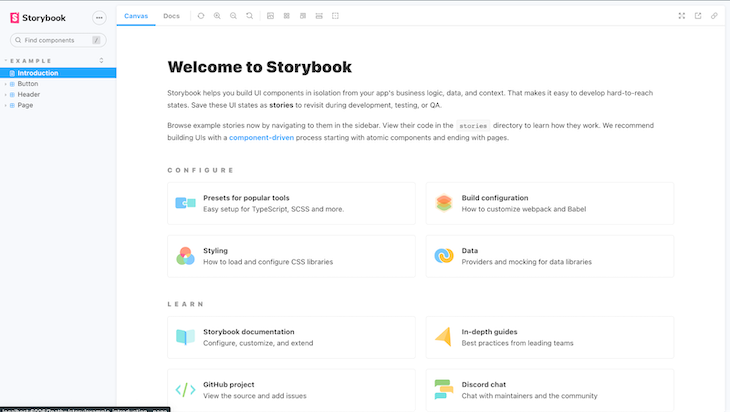 Notice that Storybook has already created a few button components that we can explore using the UI:

We’ll use Lost Pixel to perform regression testing on these pre-defined buttons.

With those changes, we can push the code to a new GitHub repo as follows:

Now that the repo is ready, we’ll add the Lost Pixel code.

With our UI set up, we’ll introduce Lost Pixel into the same repository. First, we install Lost Pixel using the command below:

Next, we create a lost-pixel.config.js file at the root of our Vite project:

Next, we need to create two GitHub workflows. In the root of the repo, create a folder named .github and another folder named workflows inside of it. We’ll place the following two files inside the workflows folder.

The lost-pixel-update.yml workflow will help Lost Pixel create the baselines against which it will perform regression testing. While performing the tests, Lost Pixel needs to know the right way to render the component in order to determine whether the component has diverged from that behavior.

Notice that the steps in this GitHub action are straightforward. We create a Node.js container, build our Storybook components, and then run Lost Pixel using the pre-built action released on the GitHub action store, lost-pixel/[email protected].

This action runs the Lost Pixel action in update mode. However, notice that the last step is special, creating a pull request with the changed components so that those can be merged with the repo and act as the new baseline components. We’re using the secrets.GH_TOKEN to authenticate while we create the pull request, which we’ll review later.

The lost-pixel-test.yml workflow will be triggered on every push to the repo, thereby generating the new images for the components and comparing them against those generated while running the baseline tests. If there is any difference between the two, the test will fail. The lost-pixel-test.yml file looks like the following code:

This action is almost the same as the previous action with some slight differences. The last step that creates a PR is missing, and we’re also not running Lost Pixel in update mode. As we noticed in the lost-pixel-update.yml file, the PR creation step requires that we supply secrets.GH_TOKEN.

Check out this GitHub repo for the detailed steps to generate a personal access token. In short, the steps are as follows:

Once the token is generated, copy it to the clipboard. We need to add it as a secret in the repo: 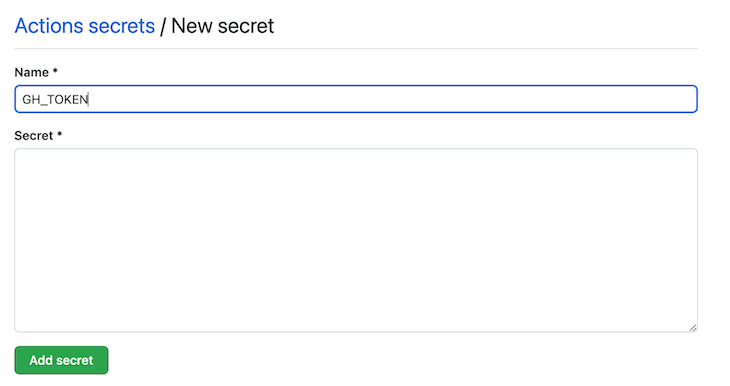 Name the secret GH_TOKEN, paste the secret, and then click on Add secret. This will add the secret to the repo so that the PR creation step goes through smoothly.

With this setup done, we can now run the action to generate the baselines for all our of Storybook components. Add the two newly created .yml files, create a commit, and push it to the remote repo. We can see that the test gets triggered immediately on a code push, but it fails because there are no baselines: 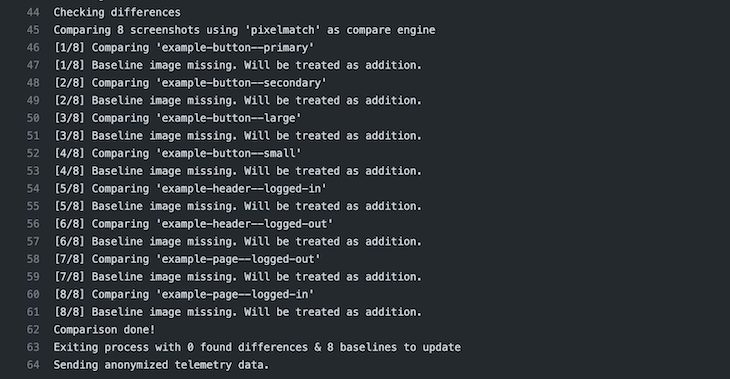 Let’s run the workflow to generate baselines. Visit the Actions tab of the GitHub repo, then select the lost-pixel-update.yml workflow. Click on Run workflow:

With all the previous steps completed, the workflow runs smoothly and creates a pull request as a result: 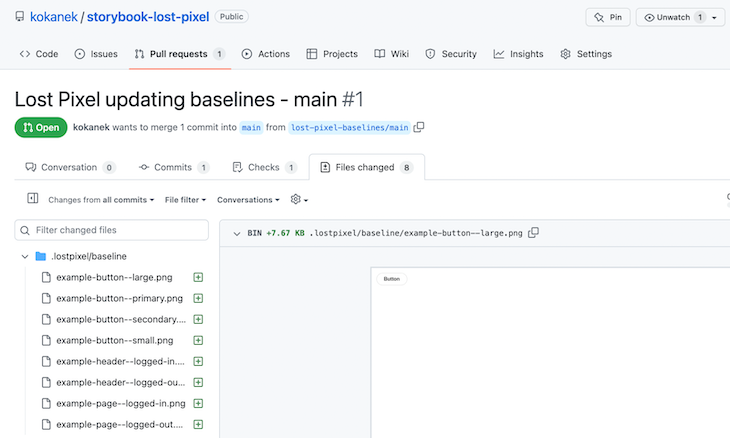 Merge the pull request so that the .png files corresponding to the baselines get merged in the repo.

With the baselines configured, let’s introduce some visual regressions in our Storybook component. Visit the stories Button.stories.jsx file and change the label of the primary button to say Test Button:

Save the file, commit, and push to the remote:

You should see that the lost-pixel-test.yml workflow is triggered immediately. It runs, successfully pointing out that there is a regression in the primary button version of the component:

If this is an expected regression, we can trigger the lost-pixel-update.yml workflow as before, and the baselines would be updated.

Lost Pixel provides us with an alternate method to perform UI regression testing, which is significantly different from the standard practice of snapshot testing. If your project uses lots of Storybook components, and you’re not concerned about additional .png images being pushed to the repository, you can explore Lost Pixel in your projects for detecting UI regressions.

Kapeel Kokane Follow Coder by day, content creator by night, learner at heart!
« You are not your customer: How to avoid building the wrong product
Using Re.pack for large-scale React Native projects »