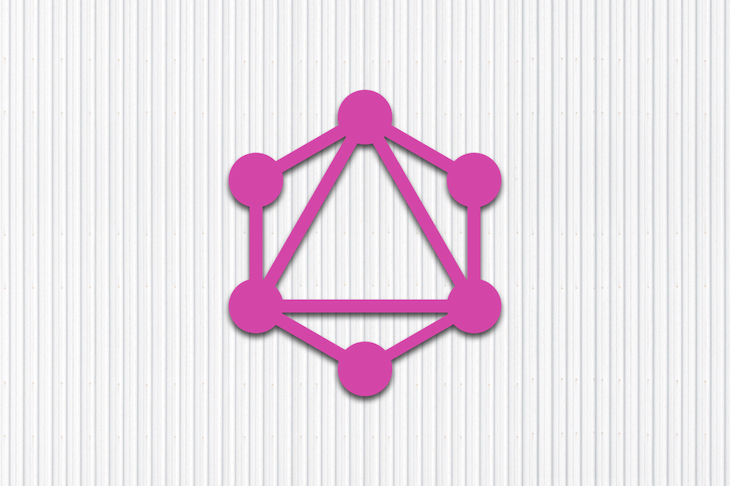 No developer would want to use software that is extremely fast but so complex that you need to be a genius to use it, or very simple to use but too slow. Hence, designing for simplicity cannot be an afterthought; it must be engineered into the software right from the beginning.

In my previous article, “Designing a GraphQL server for optimal performance,” I showed how a GraphQL server can completely avoid the N+1 problem by having the resolvers return the ID of the objects (instead of the objects themselves) when dealing with relationships. Doing so made the code for the resolvers become very simple because it doesn’t need to implement the “deferred” mechanism anymore, which is instead embedded within the server itself, hidden from view.

For example, take the following (PHP) code for a resolver. Field author, which is a field of type User that must be resolved through one or more additional queries to the database, should be more difficult to resolve than field title, which is a scalar field that can be immediately resolved.

Yet the only difference is two lines of code in function resolveFieldTypeResolverClass, which itself just returns a classname (to indicate the type of object that author must resolve to):

This step is half of the solution to load data in a very simple manner. It transfers the responsibility of implementing the complex code in the resolvers away from the developer and into the server’s data loading engine, to hopefully be coded only once and used forever. However, doing this alone doesn’t make the overall application become simpler, it just moves its complexity around.

So now let’s delve into the second half of the solution: making the code in the server’s data loading engine as simple as it can ever be. For this, we need to understand graphs, the data model over which GraphQL stands.

Graphs all the way down?

On its page titled Thinking in Graphs, the GraphQL project states (emphasis mine):

Graphs are powerful tools for modeling many real-world phenomena because they resemble our natural mental models and verbal descriptions of the underlying process. With GraphQL, you model your business domain as a graph by defining a schema; within your schema, you define different types of nodes and how they connect/relate to one another. On the client, this creates a pattern similar to Object-Oriented Programming: types that reference other types. On the server, since GraphQL only defines the interface, you have the freedom to use it with any backend (new or legacy!).

The takeaway from this definition is the following: even though the response has the shape of a graph, this doesn’t mean that data is actually represented as a graph when dealing with it on the server side. The graph is only a mental model, not an actual implementation.

This realization is shared by others:

GraphQL itself has the name “graph” in it, even though GraphQL isn’t actually a graph query language!
– Caleb Meredith (ex-Apollo GraphQL)

[GraphQL is] neither a query language, nor particularly graph-oriented. … If your data is a graph, it’s on you to expose that structure. But your requests are, if anything, trees.
– Alan Johnson (ex-Artsy)

This is good news because dealing with graphs is not trivial, and we can then attempt to use a simpler data structure.

What comes to mind first is a tree, which is simpler than a graph (a tree is actually a subset of a graph). Indeed, as mentioned in the quote above, the shape of the GraphQL request is a tree. However, using a tree structure to represent and process the data in the server is not trivial either and may require hacks to support modeling recursions.

Is there anything simpler?

Components all the way down!

What I found to be a most suitable structure for storing and manipulating object data in the server side is… components!

Using components to represent our data structure on the server side is optimal for simplicity because it allows us to consolidate the different models for our data into a single structure. Instead of having a flow like this:

Huh? Can you explain that in English, please?

Let me make my previous explanation clearer using an example. Let’s say that we want to build the following “Featured director” widget:

Then we identify what data is needed for each component. For <FeaturedDirector>, we need the name, avatar, and country. For <Film>, we need thumbnail and title. And for <Actor>, we need name and avatar:

And we build our GraphQL query to fetch the required data:

As you can see, there is a direct relationship between the component hierarchy above and this GraphQL query.

Let’s now move to the server side to process the request. Instead of dealing with the query as a tree, we continue using the same component hierarchy to represent the information.

In order to process the data, we must flatten the components into types (<FeaturedDirector> => Director; <Film> => Film; <Actor> => Actor), order them as they appeared in the component hierarchy (Director, then Film, then Actor), and deal with them in “iterations,” retrieving the object data for each type on its own iteration, like this:

The server’s data loading engine must implement the following (pseudo-)algorithm to load the data:

Loop until there are no more entries on the queue:

By the end of the iterations, we will have loaded all the object data for all types, like this:

Notice how all IDs for a type are collected until the type is processed in the queue. If, for instance, we add a relational field preferredActors to type Director, these IDs would be added to the queue under type Actor, and it would be processed together with the IDs from field actors from type Film: 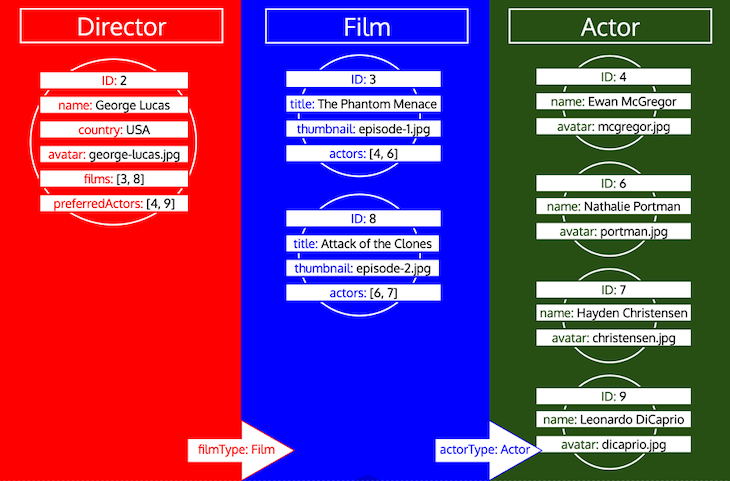 However, if a type has been processed and then we need to load more data from that type, then it’s a new iteration on that type. For instance, adding a relational field preferredDirector to the Author type will force the type Director to be added to the queue once again:

Also note that here we can use the caching mechanism as implemented in dataloader: on the second iteration for type Director, the object with ID 2 is not retrieved again since it was already retrieved on the first iteration. Thus, it can be taken from the cache.

Now that we have fetched all the object data, we need to shape it into the expected response, mirroring the GraphQL query. However, as you can see, the data does not have the required tree structure. Instead, relational fields contain the IDs to the nested object, emulating how data is represented in a relational database.

Hence, following this comparison, the data retrieved for each type can be represented as a table, like this:

Having all the data organized as tables, and knowing how every type relates to each other (i.e., Director references Film through field films; Film references Actor through field actors), the GraphQL server can easily convert the data into the expected tree shape:

Finally, the GraphQL server outputs the tree, which has the shape of the expected response:

Analyzing the time complexity of the solution

Let’s analyze the big O notation of the data loading algorithm to understand how the number of queries executed against the database grows with the number of inputs to make sure this solution is performant.

The GraphQL server’s data loading engine loads data in iterations corresponding to each type. By the time it starts an iteration, it will already have the list of all the IDs for all the objects to fetch, hence it can execute one single query to fetch all the data for the corresponding objects.

The solution outlined in this article is used by the GraphQL server in PHP that I’ve implemented, GraphQL by PoP. The code for its data loading engine can be found here. Since this piece of code is very long, and I have already explained how the algorithm works, there’s no need to reproduce it here.

In my previous article, I started describing how we can build a GraphQL server that is performant, and in this article I completed it by describing how it can be made simple by using components to represent the data model in the server instead of using graphs or trees.

As a consequence, implementing resolvers is very performant (linear complexity time based on the number of types), and very easy to do (the “deferred” mechanism is not implemented by the developer anymore).

Leonardo Losoviz Follow Freelance developer and writer, with an ongoing quest to integrate innovative paradigms into existing PHP frameworks, and unify all of them into a single mental model.
« Top 10 Vue component libraries for 2020
Vuex: why we need SPA state management »