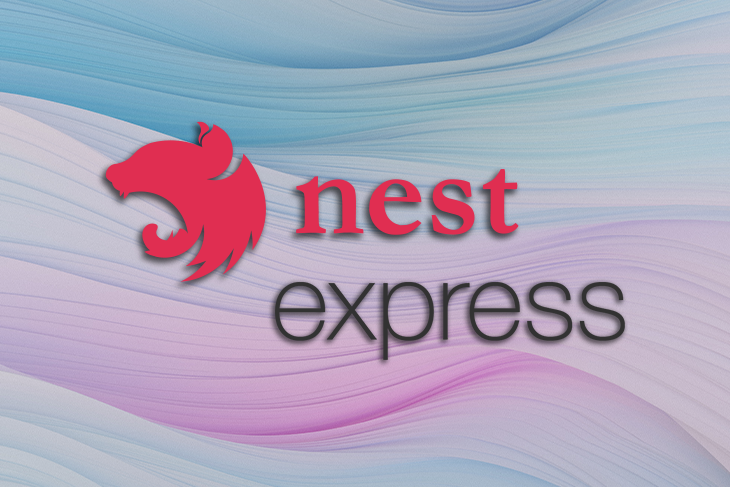 When we want to build a large-scale application with a framework, Express.js is usually the first thing that comes to mind. Express has gained popularity in the last few years among developers. NestJS is another popular framework that can do the job pretty well, too.

As both Nest and Express are used as frameworks for Node.js applications, there’s been a hot debate over which option is better for developers starting a new Node project. In this article, we’ll be comparing NestJS and Express.js to help developers make an informed decision.

NestJS is a Node.js framework for building server-side applications. It is based on TypeScript and JavaScript.

This framework is inspired by Angular, so most of what you find in Angular can also be found in Nest, including providers, middleware, components, and services. It is safe to say that Nest can be easily learned by Angular developers for any type of project.

Nest makes use the Express HTTP framework by default. However, Nest is platform agnostic, meaning it can work with any Node HTTP framework. For example, it can optionally be configured to use Fastify, which can improve the Node framework.

One of the cool things about NestJS is that anything supported in Express (i.e., Express functions) is also supported in Nest.

Let’s go over some of the core components of NestJS.

Dynamic modules are a powerful feature of the Nest module system. This feature allows you to easily create customizable modules that can dynamically register and configure providers.

Providers are very important, as Nest relies heavily on them to create relationships between different objects. A provider can be injected as a dependency.

Classes like services, repositories, and helpers can be treated as providers; simply adding the @Injectable() decorator from Nest will handle the resolution, making dependency management extremely simple.

When an HTTP request is received, the routing mechanism routes it to the correct controller within NestJS. Controllers handle incoming requests and respond to the application’s client side.

How to install NestJS

Nest includes an excellent CLI that makes it simple to scaffold a Nest application.
In your terminal or command prompt, type the following:

Let’s use the cd command to change into the directory where we want to build our app. Run the following commands:

Go to http://localhost:3000 in any browser. You should see a “Hello World” message.

Let’s explore some of the notable features that set NestJS apart.

Working with Node and Express is great for building a small, lightweight app where the code is nice and easy to read. However, as things start to get complex and you add more features to your application, your code will start to get a little messier and harder to manage.

This is where NestJS comes in. Nest can organize your application into self-contained modules, each with its own responsibility. A module can contain related controllers and services and keep them fairly isolated from the rest of your application.

Exception filters are another cool Nest feature. All applications encounter exceptions from time to time. How you handle exceptions is really important, and conveniently, Nest sorts all of that out for you.

Nest includes an exceptions layer that is responsible for handling all unhandled exceptions across an application. When an exception is not handled by your application code, it is caught by this layer, which sends an appropriate user-friendly response automatically.

You also get easy MongoDB support with Nest. A lot of web apps built with Node use the MEAN stack, which consists of MongoDB, Express, Angular, and Node. One of the most popular libraries for accessing the Mongo database is Mongoose.

You can easily connect to the MongoDB database and use it to build scalable applications using the NestJS Mongoose package.

Finally, as we already mentioned, NestJS uses the Express framework by default as the request processing pipeline. This means if you are already familiar with Express processing, you’ll be able to adapt your Express middleware to use within Nest.

Express is a Node.js web application framework that provides a wide range of functionality for constructing web and mobile applications. It is a layer built on top of Node that aids in the management of servers and routes.

You can use Express with Node to create single-page, multi-page, or hybrid web applications. It supports the MVC architectural pattern for designing web applications: Model, View, and Controller.

How to install Express.js

To use Express for our project, we first to install it:

Then we want to import Express inside our project:

Next, we need to initialize our app, give it a port to listen to, and respond to a request on that path:

Let’s go over some of the features of Express.

Middleware is a program component that has access to a database, client requests, and other middleware. It is primarily responsible for the systematic organization of various Express.js functions.

When it comes to routing, Express includes a sophisticated routing mechanism that uses URLs to preserve the state of the webpage.

Finally, Express includes template engines that enable developers to create dynamic content for web pages by creating HTML templates on the server side.

In this section, we will directly compare various aspects of Nest and Express, including example use cases for each.

NestJS vs. Express.js: Opinionated and un-opinionated

Nest is a framework with strong opinions. It adheres to the design paradigm of “convention over configuration,” which allows developers to use standard tools and code in a specific manner, thus reducing the need for explicit configuration.

In addition, NestJS is Angular-based, so TypeScript is its primary programming language, although you can also use JavaScript. The use of TypeScript ensures that the application is reliable and bug-free.

Express.js is a framework without strong opinions — in other words, un-opinionated. This means it doesn’t have a set of pre-defined rules to follow. Developers often use this opportunity to experiment with different scenarios and write code as needed.

Nest.js follows closely behind. It has over 47,000 stars on Github, ranking second among the top Node.js frameworks by Github stars.

Express can execute multiple operations independently of each other using asynchronous programming. Nest employs the Express framework by default.

However, Nest also provides an alternative way to change the underlying framework from Express to Fastify for significantly improved performance.

Nest offers a ready-to-use application architecture using controllers, providers, and modules. This enables developers and teams create applications that are simple to test and maintain.

Express does not require a specific structure, which can provide flexibility for small or one-person development teams. However, this can become a problem as team size or app complexity grows, especially with developers working on different aspects of the app.

The Nest CLI comes with a Jest-based default testing environment. When a service, interceptor, or controller is created, the CLI creates a spec file. This file includes auto-generated testing bed code, eliminating the need for developers to write additional code for unit testing.

In Express, unit testing necessitates the construction of distinct codes, which takes time and might slow down the application’s productivity.

NestJS vs. Express.js: Use cases

Let’s take a look at some use cases for Nest vs. Express.

Some examples of what to build with NestJS include enterprise-level web applications and ecommerce applications.

NestJS applications scale well, making them perfect for large, enterprise-level applications. It’s no surprise that leading companies like Adidas, Roche, Trilon, and others use Nest.

We can also easily construct ecommerce websites by combining NestJS with a frontend framework like React, Angular, or Vue.

Other examples of what you can build with Express.js include fintech applications and streaming applications.

A computer software or other technology used to support or facilitate banking and financial services is referred to as fintech. More and more financial institutions are creating fintech applications, and Express is the framework of choice for creating highly scalable finance applications.

Real-time streaming services are complex, with multiple levels of data streams. To create such an app, you’ll need a robust framework such as Express.js that can efficiently handle asynchronous data streams.

According to some developers, you are ahead of the game if you are already using NestJS. This framework gives you a significant advantage early on and also helps you take your Node backend to the next level by properly structuring your app.

However, Express.js is one of the best and most popular backend development frameworks using JavaScript, and will likely remain so for some time. Which option do you prefer? Share your thoughts in the comment section!

Temitope Oyedele Follow I am a web developer and technical writer. I love to write about things I've learned and experienced.
« Exploring blockchain video streaming platforms
How to build a product roadmap that everyone buys into »