Agustinus Theodorus Follow I'm a software architect, automation enthusiast, and an avid researcher. I have experience in architecting robust automated systems, and my solutions have been published by Microsoft and IEEE, among others. 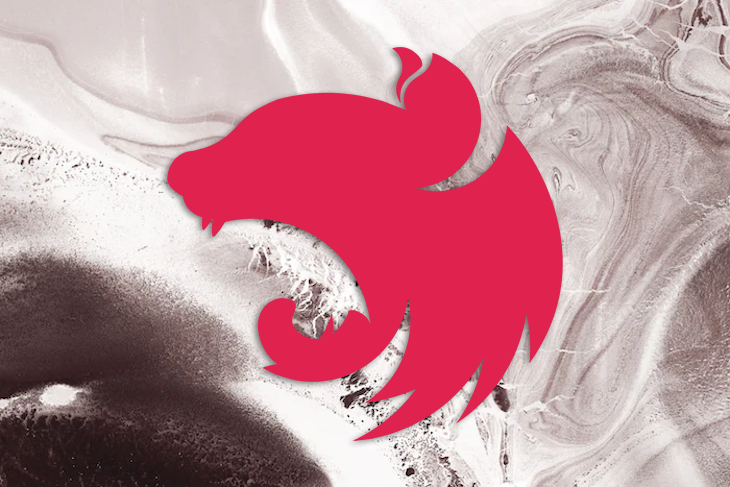 There are a plethora of ways to start your web development journey, and with so many frameworks available for the modern web, it’s becoming more of a hurdle for newbies to pick one that is best for them.

Although any given web framework is obviously made for the web itself, each has its own individual strengths and weaknesses. For example, the type of website you’ll build, how performant your site should be, the developer pool available, and the cloud provider you use will all affect the decisions you’ll make. As a result, there is a lot to consider when choosing a web framework.

In this article, we’ll review two popular frameworks, NestJS and ASP.NET, comparing them in terms of features and usability. Let’s get started!

NestJS is a Node.js web framework that is fully implemented using the TypeScript programming language. Compared to other web frameworks in Node.js, NestJS emphasizes a more organized project structure. Most experienced developers will recognize how NestJS structures code from another framework, Angular.

NestJS utilizes TypeScript’s object-oriented programming to the fullest in contrast to the functional approach used by Express. Under the hood, NestJS uses Express or Fastify to run its HTTP servers depending on your configuration. So, you can think of NestJS as an abstraction layer on top of another framework.

ASP.NET is a web framework created by Microsoft that uses Microsoft’s C# programming language. ASP.NET has been around for a long time, from as early as 2002. Even so, it has improved tremendously over the years and has continuously released a new version annually.

As a result, ASP.NET, now more commonly called .NET, is a suite of programming tools that you can use to build almost anything with C#. The web framework is now commonly referred to as .NET Core, with .NET 6 being the latest version at the time of writing.

What are TypeScript and C#?

Microsoft created both TypeScript and C#. Microsoft created C# in response to increasing demand amid the dot-com boom. Languages like Java by Sun Microsystems were evolving to become one of the most popular programming languages among web developers, so Microsoft decided to enter the market by creating its own language.

After the dot-com burst, JavaScript was also becoming increasingly popular. During the early 2010s, Microsoft engineers created a superset of JavaScript with a robust types system called TypeScript. But, TypeScript took its time to mature before booming in the late 2010s, around 2016 to 2017.

Since the same company created both programming languages, they have inherent similarities that affect the development experience. Both languages are compiled, meaning the compiler will check the errors during compile time. However, compiling is only true if you use TypeScript, not JavaScript.

OOP in TypeScript is somewhat better than it is in JavaScript. However, both JavaScript and TypeScript support classes, and implementing code encapsulation in both languages is pretty straightforward:

However, the one thing that TypeScript has that JavaScript doesn’t are interfaces:

Implementation of the interface will look something like the code below:

NestJS is the framework with one of the most proficient uses of OOP in TypeScript. Everything in NestJS involves OOP concepts, like interfaces, classes, and dependency injection.

C# is modeled after the most popular OOP programming language of its time, Java. Until recently, coding in C# always had the same downsides as coding in Java, for example, having to create a main function, dealing with complex project structures, and confusion surrounding similar and conflicting class names for providers, services, and controllers.

Creating a similar base class in C# will look something like the code below:

The full implementation of the interface will look something like the code below:

Speaking from experience, compared to TypeScript, you will find that C# has much richer OOP features. Interfaces scratch only the surface of what C# can do. A more advanced concept will be to use reflections, but I’m getting ahead of myself here.

Now, we’re getting to the controversial part; which one should you choose for your project?

Both NestJS and .NET are remarkable frameworks for you to build on, but some of the decisions you need to consider will most likely fall under personal preference. It’s not a popularity contest and is just as situational as anything else in a business. Choosing between these two frameworks is tricky because of how similar they are.

When it comes to authentication, caching, and database access, both NestJS and ASP.NET provide out-of-the-box features. NestJS has these covered with the following packages:

This article by Tevpro describes a collection of features NestJS provides you with out-of-the-box. To provide you with a better description, you can look at the table comparing the available packages between NestJS and ASP.NET:

Naturally, there are many more packages for the ASP.NET web framework in comparison to NestJS since ASP.NET has been around longer. But over time, NestJS will benefit from the ever-growing number of JavaScript and TypeScript developers entering the space.

It may surprise you that there are a lot of similarities between NestJS and ASP.NET. Since both frameworks heavily rely on OOP on a day-to-day basis, and given how similar TypeScript and C# are as programming languages, it’s not too different when you compare an app created using either framework.

For example, a service controller for a simple NestJS project will look something like the following:

The AppController receives an AppService via dependency injection, and the getHello function will return a string as a response. For example, a similar controller in ASP.NET will look like the following code:

Compared to the NestJS counterpart, it does seem more verbose to write in ASP.NET. Because both frameworks use compiled languages, compilers can catch trivial errors like type errors before runtime.

Comparing speed between two frameworks is controversial and may invite a few snarks at the very least, but you should still consider it when choosing frameworks. 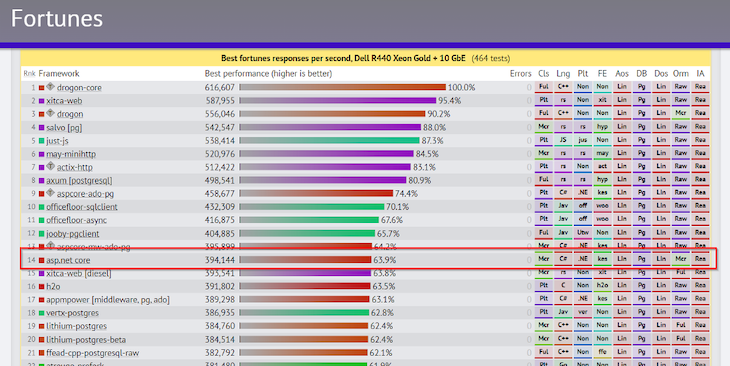 While NestJS, using a Fastify backend, comes in at #239:

Please note that these benchmarks are arbitrary speed calculations of how fast a framework would respond. You don’t necessarily need a fast framework most of the time. The most important metric, arguably, is your development speed, but that’s VERY subjective, bringing us to the next point.

When should you consider NestJS over ASP.NET?

When choosing between NestJS and ASP.NET, public opinion will leave you indecisive. Usually, it will boil down to which community you ask, or, in this case, Sub Reddit.

After reviewing Reddit, a few posts compare the two frameworks. Some compare Node.js directly with ASP.NET. The main consensus from the discussions can be summarized as, if you want to move from Node.js over to ASP.NET, consider TypeScript first.

Since NestJS already uses TypeScript, this automatically solves the problem, right? Wrong. It’s not as simple as that. Sure, TypeScript is claimed to be better because it combines a frontend language and a backend language, making it easier for small teams to scale their product. But, there are some instances where using ASP.NET will make more sense.

For example, if your cloud provider is Azure, and you don’t mind a vendor lock-in, ASP.NET is better.

But, on a broader scale, there aren’t many differences between NestJS and ASP.NET because there’s a lot of overlap in the philosophies they pursue, most evidently in their heavy use of OOP. So, on some occasions, you’ll find more similarities between the two frameworks than differences, except particularly language-specific differences, in which a lot exists.

When choosing your framework, you should be aware of common pitfalls. Don’t be too dogmatic about your previous choices. Times change, and some frameworks might become more adopted not because of their sheer capability, but because they won a popularity contest. Don’t shoot yourself in the foot over something trivial.

NestJS and ASP.NET are remarkable frameworks, but their uses are usually limited to the kind of team you have.

There’s no reason to choose these frameworks definitively, unless you are doing something industry-specific that requires you to use one set of languages over the other. For example, if you use Unity for game development, which inadvertently uses C#, then you should consider using ASP.NET for your backend.

Agustinus Theodorus Follow I'm a software architect, automation enthusiast, and an avid researcher. I have experience in architecting robust automated systems, and my solutions have been published by Microsoft and IEEE, among others.
« What are vanity metrics? Examples and how to avoid them
Using React Flow to plan a React project »