Rajat Kumar Gupta Follow Rajat is an AR/VR content creator with 1.3k subscribers on YouTube. In his spare time, he writes helpful tutorials for the global AR/VR community. His articles have been published in HackerNoon, LogRocket, FreeCodeCamp, and AR/VR Journey Magazine. To know more about him, visit rajatkumargupta.com. 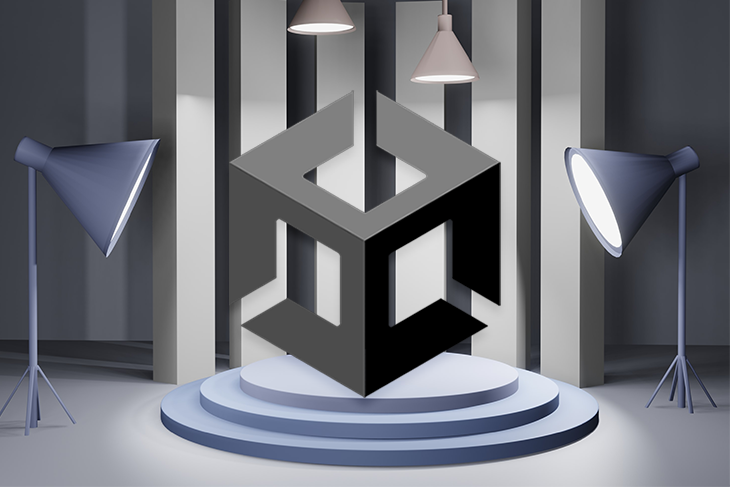 In this article, I will show you how to create a 360 VR video in Unity with the help of two tools:

This technique can be used to create 360 VR videos for any scene inside Unity. For demonstration purposes, I will be using the free Apartment Kit asset available in the Unity Asset Store, and this is what you will get after following the steps in this article.

Play the YouTube video and swipe across the video player to get a 360 view of the apartment.👇

If you haven’t done so already, create a new Unity 3D project and name it “VR 360 Apartment.”

You can do so by launching Unity Hub on your computer and clicking New Project.

After clicking on New Project, the below window pops up. To ensure that we are creating a 3D project, do the following steps:

The project will take a few minutes to open up in Unity.

When the Open in Unity button appears, click on it.

This is what you will see👇: 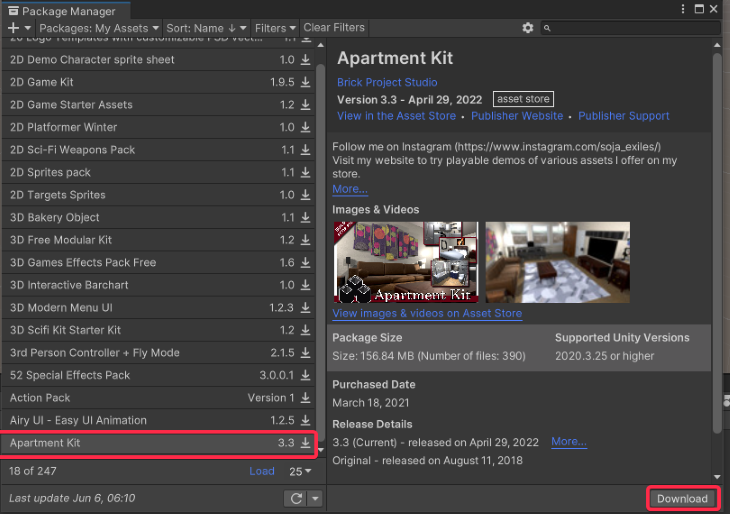 This window is called the Package Manager. On the left-hand side, you will see all the assets that you have purchased from the Unity Asset Store. On the right-hand side, you get the description of that asset. Convenient, isn’t it? 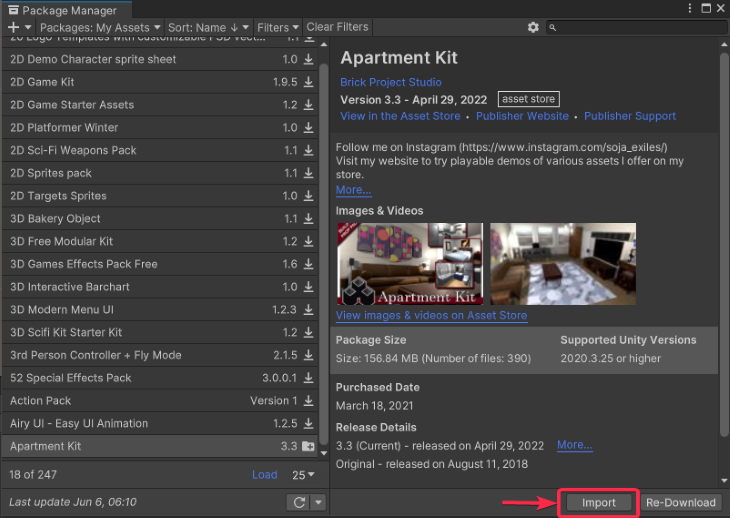 After clicking on Import, simply click on the Install/Upgrade button if you get a warning. After that, you will see this pop-up: 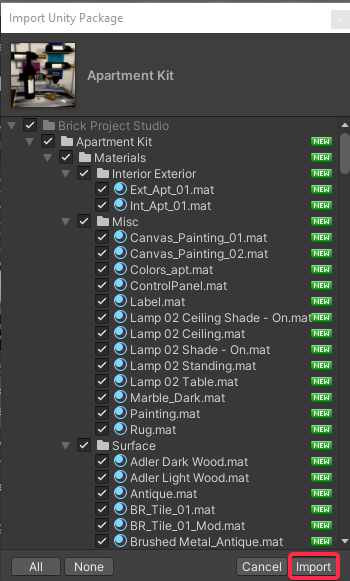 N.B., many times when you import a third-party asset like the one above, you need not import all the files of that asset in your project. This is why Unity gives you the option of selecting specific files for your project so that you don’t bloat your project with unnecessary things.

For the purpose of this tutorial, ensure that all the files are checked and then hit Import.

After the asset is imported, you will see a new folder called Brick Project Studio under Assets in the Project Panel on the bottom left-hand side. This means that you have successfully downloaded the Apartment Kit asset. 🎉 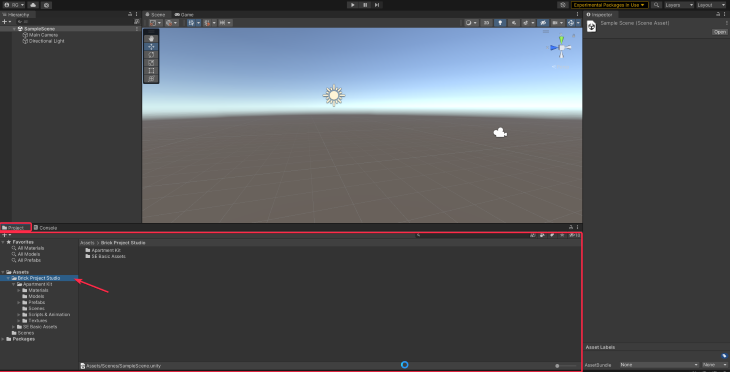 💡 If the assets panel looks a bit different for you, you can change the view by dragging the little switch left and right (as demonstrated below). The switch is located on the bottom right-hand side. 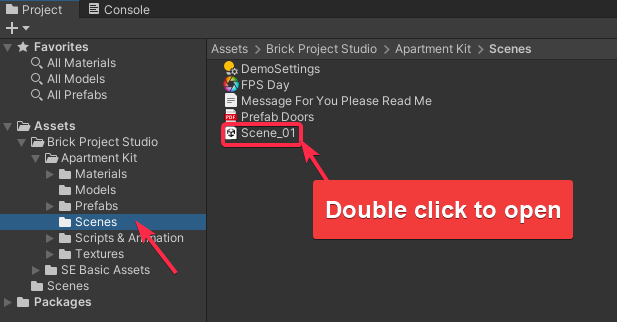 This is what you will see in the Scene panel:

Try zooming in to get a good view of your apartment:

In the Scene Hierarchy window, expand the Base Scene Game Object.

Select First Person Player. Reposition this game object so that it is inside the apartment. Here is a quick demo:

Please make sure that this Camera object is tagged as Main Camera. Here is how you can do so from the Inspector Panel:

Also, uncheck the Mouse Look Script Component for the Camera game object from the Inspector Panel.

Phew! Now the apartment is set up.

All we have to do now is record a 360 VR video of the apartment.

Record a 360 VR Video of any scene in Unity

Step 2: Switch to Unity Registry instead of My Assets 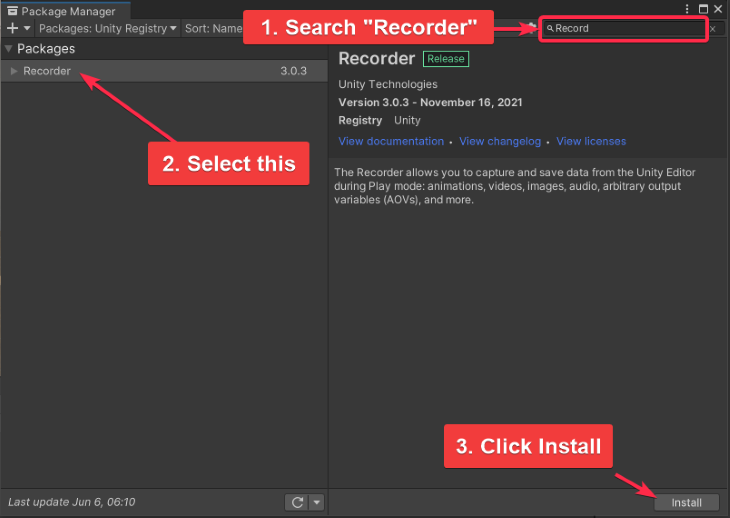 Step 6: In the Movie Settings, keep the following settings (annotated in the image below). 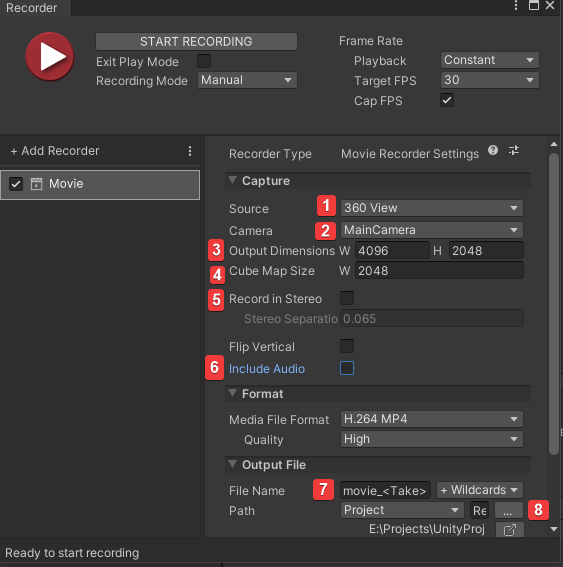 Keep this Recorder window open. We will need it in the next two steps.

Step 7: Click the play button in the Unity Editor.

Step 8: While in Play Mode, click Start Recording in the Recorder Panel.

Step 9: After 30 seconds (roughly) stop recording. You can record a longer video based on your requirement. Then go to your Project folder > Recordings. You will find a file called “Apartment 360 Video.mp4.”

Try playing the above video in any video player such as VLC Media Player. It will appear a bit distorted. It is expected behavior. This happens because the video doesn’t include any data about the 360 support capability. To add this 360 support, you have to inject data, or rather “metadata,” using a tool by Google.

Let’s see how to install Google’s Spatial Media tool and then inject 360 metadata into Apartment 360 Video.mp4.

Step 1: Download the Spatial Media Meta Data from their official repository. Scroll down a bit till you see this Assets section in their releases page. Get the “360.Video.Metadata.Tool.win.zip” file.

Step 2: Extract the zipped folder anywhere on your computer and then run the Spatial Media Metadata Injector.exe file. You will get this pop-up.

Step 4: Finally, click on Inject Metadata. This will create a file called Apartment 360 Video_injected.mp4. That’s it.

Now, this video can be easily uploaded to YouTube or you can even try playing it on VLC Media Player. You will be able to pan around the 360 video by holding the left click on your mouse and moving around.

You can get the final project here.

Feel free to use other assets from the Unity Asset Store and create your own 360 videos in Unity. You can even create your own environments using different assets, arrange them as you wish, and then record a 360 video of it. Isn’t that amazing?🙂

If you’re exploring AR and VR, get my 100+ AR/VR Resources Pack and save thousands of hours on AR/VR research. Or check out some of my other work here.

Rajat Kumar Gupta Follow Rajat is an AR/VR content creator with 1.3k subscribers on YouTube. In his spare time, he writes helpful tutorials for the global AR/VR community. His articles have been published in HackerNoon, LogRocket, FreeCodeCamp, and AR/VR Journey Magazine. To know more about him, visit rajatkumargupta.com.
« Demystifying edge functions
6 tried and true product management frameworks you should know »