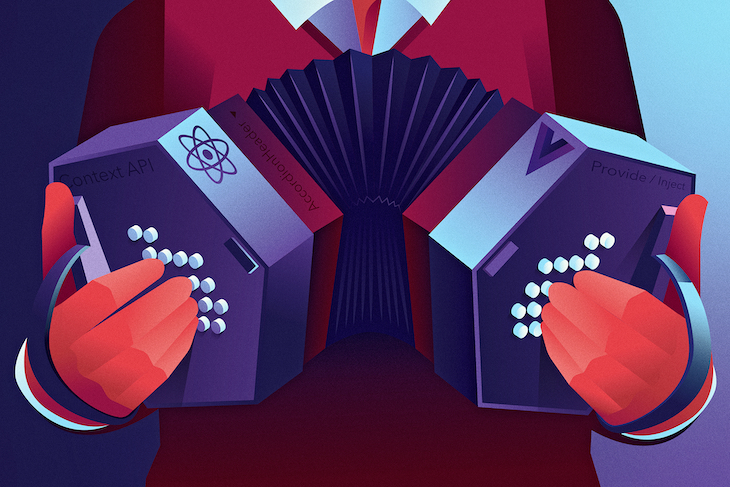 Imagine you are creating an accordion component that you want to distribute publicly through an npm package. You would like the user of this accordion to be able to use the component in a very flexible way, by composing multiple components together.

Imagine this is your ideal API:

AccordionItem will contain each section of the accordion that can be expanded or collapsed, AccordionHeader will be the place where the user can click to expand or collapse, and AccordionPanel will contain the content to be shown or hidden.

Each AccordionItem will need to maintain some state — whether it is expanded or not. But AccordionHeader will also need access to this value, so that it can show the appropriate toggle button. And AccordionPanel may also need to access this, since it is the thing being expanded and collapsed.

One possibility is exposing the expanded value to your user through render props and making sure your documentation lets them know they need to pass that down to the header and panel components.

While this may seem like a decent solution at first, it’s not ideal that the consumer of our component has to worry about the component internals. The fact that AccordionHeader and AccordionPanel need access to the expanded state should not be something our user has to be concerned about.

It should also not be noted that while this is a trivial example, your component may be far more complex, with multiple levels of nested components, in which case prop drilling may become quite tedious.

What we really need is a way to implicitly pass down props.

There is a better solution for cases like this — React’s Context API. We can use the Context API to create some state and provide it where needed behind the scenes, removing this concern from our public-facing API. (See also: Compound Components pattern).

First, we will create a context and define the shape of that context. We will start with an expanded value and a toggleExpansion method. We are defining this context as specifically relevant to our accordion item:

Now, inside our AccordionItem component, we will define the expanded and toggleExpansion values and feed them in as the value of the Provider component.

Next, we need to set up AccordionHeader and AccordionPanel as consumers of this context:

The Consumer component requires a function as its child. This function will receive the context value, which we are destructuring into expanded and toggleExpansion. Our component is then able to use these values in its template.

We will similarly use Consumer to give AccordionPanel access to the context value:

Now, we really can achieve our ideal API for the accordion component. Users of our component won’t have to worry about passing state up or down the component tree. Those component internals are hidden from them:

Vue provides a similar tool to React’s Context API, called provide/inject. To use this, we will use the provide method on our accordion-item Vue component:

We return an object from provide() that contains the state we want to provide to other components. Note that we are passing an object to accordionItemState, rather than simply passing the <code”>expanded value. In order to be reactive, provide must pass an object.

Note that we are using a render function here to create this component, but this is not necessary to use provide/inject.

Now, we will inject this state into our child components. We will simply use the inject property, which accepts an array of strings corresponding the properties of the object we defined in provide.

Once we include the property name in inject, we have access to those values in our template.

It’s worth noting that you should only implicitly pass down props when it really makes sense. Doing this too much can obfuscate the real behavior of your components and cause confusion for other developers that may be working on your project.

A component library that is packaged up and distributed for use in other applications is a perfect use case for this, since the internal props of the components really don’t need to be exposed to the end user.

React’s Context API and Vue’s provide/inject feature both make it possible to do this through implicit state sharing.