How to get previous props/state with React Hooks

Accessing the previous props or state from within a functional component is one of those deceptively simple problems you’ll likely face as you work with React Hooks. 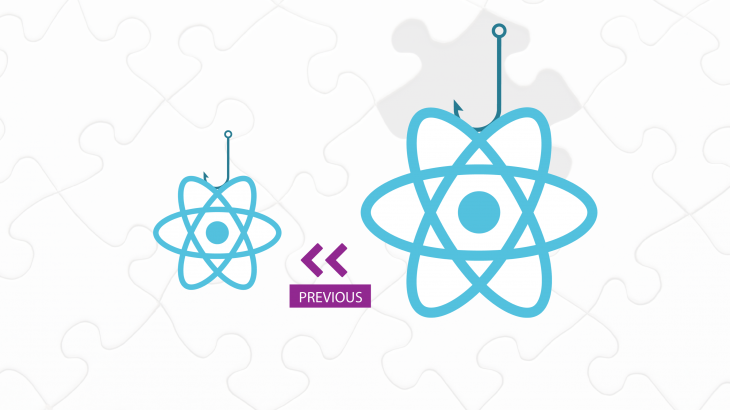 There’s currently no React Hook that does this out of the box, but you can manually retrieve either the previous state or props from within a functional component by leveraging the useRef hook.

The solution is discussed in the official React documentation, and if you look in there you’ll find the following example, where Counter represents a simple counter component:

If you’re looking for an even quicker solution, you may abstract this functionality Into the custom Hook below:

And use it within your application as follows:

However, can you really explain how the usePrevious hook works?

In the following section, I’ll explain in clear terms what’s happening within the custom Hook, and how the previous value is retained.

I work with Hooks everyday, both for personal projects and professional workplace projects.

In my experience, I’ve found that very few people really understand and take advantage of the useRef hook.

Apart from being great at handling DOM refs, the useRef hook is a perfect substitute for implementing instance-like variables within functional components.

Every instantiated copy of the Count class will have its own specialVariable instance variable.

The useRef Hook can simulate this behavior, with an even more interesting feature.

What’s interesting about the useRef hook is that it takes in an initial value to be stored — i.e: useRef("INITIAL_VALUE") — and it returns an object with a current property {current: "INITIAL_VALUE"}.

Whatever value was initially passed into the useRef Hook is saved to the current property of the ref object.

Unlike a ‘normal’ variable, the specialVariable ref object is not recomputed when the Count component is re-rendered. With the useRef Hook, the value saved in the ref object is kept the same across re-renders.

The value is not recomputed, nor is it lost. It remains the same.

Having said that, it’s worth mentioning that the only way to update the ref object is to directly set the value of the current property; e.g. specialVariable.current = "NEW_SPECIAL_VARIABLE.

Why is this explanation important?

Well, to understand what’s going on, let’s walk through the execution of the aforementioned solution to retrieving previous props/state step by step.

Now, as soon as the rendering process for the Counter app begins, what happens?

(1) The useState hook is invoked and the variables count and setCount set. Note that count is now 0. 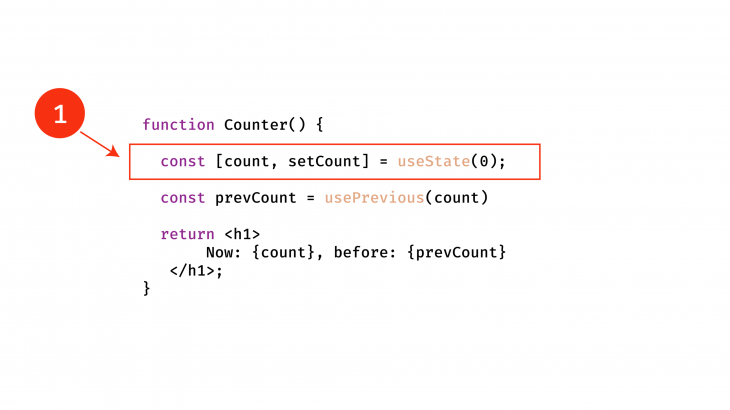 After this, the next line is executed.

(2) the usePrevious Hook is invoked with the current value of the count state variable, 0. 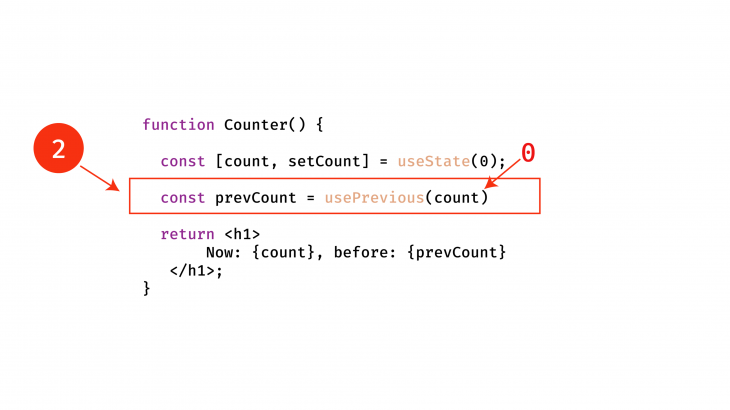 Upon invoking the usePrevious Hook, the following happens:

This ref object is initialized without an initial value, so the object returned is this: {current: undefined}

This next step is where most people slip up.

(4) The useEffect call is NOT invoked. Instead, the return value of the custom Hook is invoked. 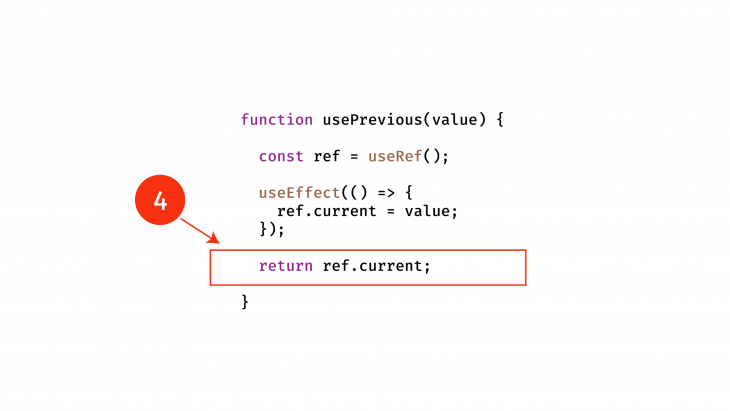 ref.current is returned, which in this case is undefined.

Why this behavior? i.e skipping the useEffect call?

Well, the useEffect hook is only invoked after the component from which it is called has been rendered (i.e, the return value of the component must be executed first.

So, what happens next?

(4) The execution within the component is resumed. This time, the prevCount variable holds the value undefined.

(5) Next, the return value of the component is evaluated: 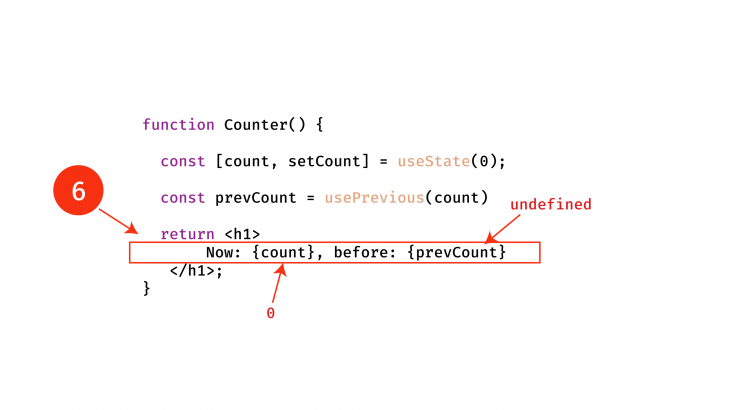 This returns the following to the screen: <h1>Now: {count}, before: {prevCount}</h1>, where count and prevCount are 0 and undefined.

(6) The useEffect call within the usePrevious hook is now invoked asynchronously in order to avoid blocking the browser from painting the DOM changes. useEffect is invoked after the render of the functional component. 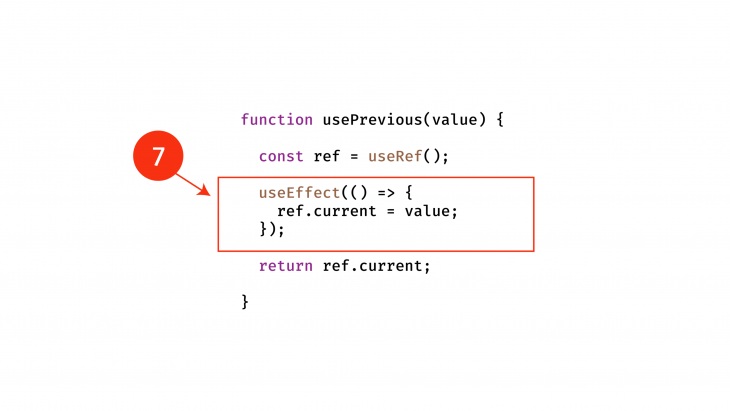 Here’s what we have within the effect function:

The line within the useEffect function updates the current property of the ref object to value. What’s the value now?

value represents what the custom Hook was initially called with. 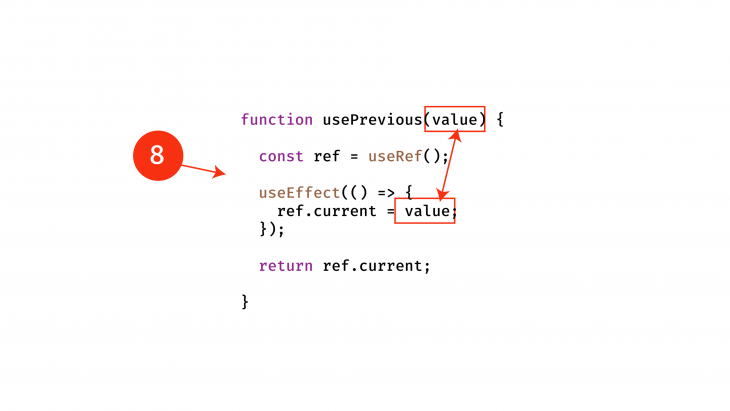 Now, the ref holds the value 0.

What happens when the count state variable within the app is updated from 0 to 1 (or a new count)?

The same flow is re-triggered.

The usePrevious Hook is invoked with the new state value 1. Then, the return statement is evaluated (return ref.current), which would be 0 — not 1 since the ref object isn’t updated yet.

Only after the render is the useEffect call within the usePrevious Hook updated with the new value, 1.

This cycle continues – and in this way, you’ll always get the previous value passed into the custom Hook, usePrevious.

To appreciate why this works this way, you must remember the following:

The fact that the ref object returned from invoking useRef remains the same across re-renders of a functional component is a powerful feature to embrace. It does this without you having to pass in any array dependency like in useMemo or useCallback.

Combine the ability to use useRef as an instance variable with the fact that the useEffect Hook is always triggered after the return statement of the parent component is evaluated, and you have an invaluable weapon at your fingertips.

You can find even more use cases for these and gain a deeper understanding of how this works to truly master Hooks.

Would you like to learn advanced React patterns using Hooks with me? Then join my soon-to-be released Udemy.

You’ll be first to know when I launch the course.

Ohans Emmanuel Follow Author, Understanding Redux. I Love God. I Love GF a little too much 💕🤣 http://thereduxjsbooks.com
« Fragments in Vue.js
How to use React-Leaflet »

The ultimate guide to iframes

The future of CSS features in 2020