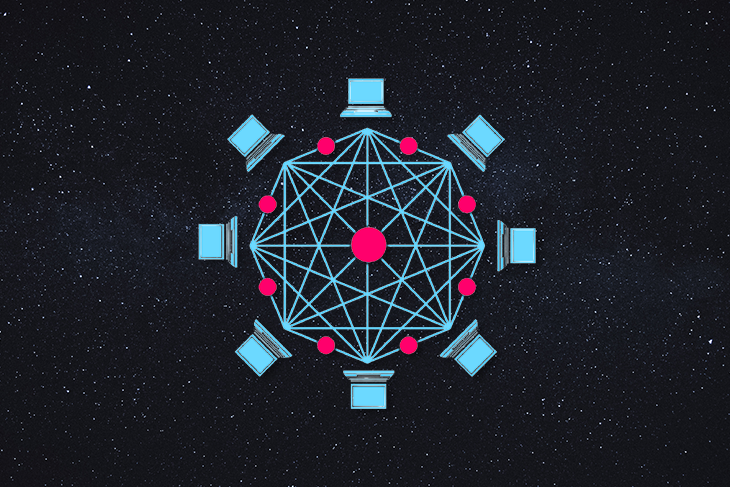 Blockchain development has grown and evolved rapidly over the past few years and is now being adopted across various spheres of software development. From decentralized applications (DApps), to decentralized finance (DeFi) software, to NFTs, to DAOs, blockchain technology has infiltrated a wide range of industries and serves many use cases.

In this tutorial, we’ll explore the emerging trend of blockchain game development. Blockchain-based games are also referred to as chain games. Once you understand the basic structure involved in writing a smart contract and deploying it to a blockchain, you can use the tools available within the crypto space to build games.

We’ll build a lottery game to demonstrate how game development on blockchain works. We’ll also review the basic structure for implementing transactions within a blockchain game. Then, we’ll deploy it to a testnet network.

This chain of linked list is itself a list of transactions. The process through which these blocks are agreed upon before they are added to the list-of-lists data structure is laid the key innovation that blockchains have given us: a protocol. This protocol helps the network decide how blocks are added to the chain.

This decision-making process gave birth to the decentralized nature of blockchain. Proof of work (PoW), proof of take (PoS), and proof of authority (PoA) are decentralized mechanisms through which these decisions are made and agreed on before a block gets added to the chain.

Blockchain platforms like NEAR provide a cryptographically secure platform for storing, updating, and removing data from a blockchain using smart contracts.

Web3, in the context of blockchains, refers to decentralized apps that run on the blockchain. These are apps that allow anyone to participate without monetizing their personal data. With good knowledge of a programming language that is supported by any of these blockchains, we can start writing smart contracts to build game applications as DApps on the blockchain.

As the blockchain ecosystem evolves, new paradigms emerge. Drawing inspiration from the De-Fi ecosystem, the blockchain game ecosystem has also evolved to something known as GameFi. GameFi, also referred to as play to earn, introduces a new way to game by turning its regular users into a governing force behind major decisions within the gaming industry.

GameFi facilitates a player-owned economy when it comes to trading valuables as well as generating additional income with tokens and non-fungible tokens. This means building communities around a particular game, and the users of these games can earn cryptocurrencies or assets that are valuable within the metaverse of the game (and outside it too).

Writing smart contracts on the NEAR blockchain

For this tutorial, we’ll demonstrate how to build games on the NEAR blockchain by building a sample game project.

Within this game, we’ll explore how to set up the codebase structure and the programming languages needed to write smart contracts that run on the Near blockchain. When we’re all done, we’ll test our application on the local environment, then deploy our smart contract to a testnet.

We’re going to clone a starter kit codebase. This repository provides a basic boilerplate on top of which to write more smart contract code as we build the various features of our game.

Once the above command is successfully executed, change the directory to the lottery-smart-contract folder. You can open it in any text editor; for this tutorial, we’ll use Visual Studio Code.

From the terminal, run the code . command within the folder directory. 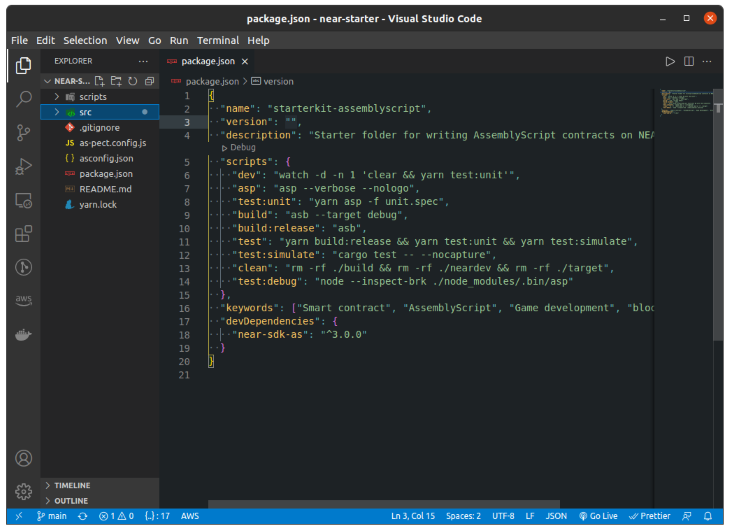 The above picture shows the basic folder structure for a NEAR project using AssemblyScript for its smart contract.

The remaining files are configuration files that AssemblyScript needs to understand some of the types defined on Near. The near-sdk-as library is a collection of packages used to develop NEAR smart contracts in AssemblyScript.

How to build a lottery game on the NEAR blockchain

With this game, we’ll explore some of the basic concepts of writing smart contracts on the Near blockchain using AssemblyScript.

Run the yarn install or npm install command to install the near-sdk-as library and any necessary dependencies.

In the above code, we define a Lottery type. This represents the structure of the lottery game type. We’ll define inside it the different interfaces we want to make available — both the public and private interfaces — just like the private luckyNum variable that’s an unsigned integer.

Now let’s define the play feature of our game. This will contain the code snippet responsible for generating a random number within a set range of integers.

With the play function, any player can call it to generate a random number using the RNG object. Then, we imported the logging object, which gives us access to output values on the native console — that’s our local machine terminal.

The play function returns a bool value, and this true or false value is the result of comparing the pickedNum against this.luckyNum to determine whether the guessed number is equal to the luckyNum defined in the lottery game.

Next, we’ll define the reset function. As the name implies, this will enable us to reset the this.luckyNum to a new random number:

In the above code, we generated another new random number. Using the assert function, we compared it against the current this.luckyNum value.

If the comparison evaluates true, then the rest of the function’s code continues to execute. If not, the function halts at that point and returns the assertion message, Rerun this function to generate a new random luckyNum.

When the assert is true, we assign the variable this.luckyNum to the newly generated number, randNum.

For each player of the lottery game, we’ll define a basic type structure. This structure presents the player within our game.

Update the model.ts file with the following code:

The Player object type contains two interfaces: the this.id variable, which is an AccountID type, and this.guesses, which is an array of boolean values.

The PersistentVector data structure is an array datatype. During initialization, we use the Context object to get the current caller of this smart contract through the Context.sender function. Then, we assign it to this.id.

For this.guesses, we initialize a new PersistentVector object and assign it to this.guesses. Then, using the push function interface available on PersistorVector, we append a new boolean value, isRight, into the this.guesses variable.

Let’s define other types and variables that we’ll use while defining the core functions in the next section:

Create an index.ts file inside the assembly folder. This is where we’ll define the core functions of our lottery game.

Inside the index.ts file, define a pickANum function, as shown below:

In the above function, we’re verifying a deposit of 0.5 NEAR tokens before any player of the lottery game can invoke any call to play a game on the smart contract. This way, our players are paying a certain amount of money before playing the game. Also, once a player plays, we update the profile of that player in the players data structure.

Next, let’s define the function that will handle paying a winning player by randomly generating the right number that’s equal to the luckyNum:

The above functions help us make transfer transactions to the winners of the lottery game. With the ContractPromiseBatch object, we create and set up a transfer transaction to the address we passed in as the argument to the create method. Then, with the transfer function, we make a transaction worth of the token, WinningPrize, that was passed into it.

For the purpose of this tutorial, we won’t focus on setting up a NEAR Testnet or Testnet wallet, but I would encourage you to check out the links to learn more about the various networks that exists in the NEAR ecosystem.

For this demonstration, we’ll build our lottery game to generate the binary format .wasm file, then use the near dev-deploy command to deploy the smart contract.

This is an alias command for the yarn asb --verbose --nologo command, as defined in the package.json file located in the root directory.

After we’ve successfully generated a build folder that contains a lottery.wasm file inside the build/release/ folder, we can run the following command to deploy it:

This will deploy the smart contract and provide us with the contract name or ID, which we can use to interact with it on the frontend or through a shell file.

I’ve written two unit tests to confirm that our application is actually functional. These two simple tests will create a lottery game and as well reset the luckyNum variable to a new random number.

In this tutorial, we demonstrated how to create game applications on blockchain platforms. Blockchain-based games can be played either as multiplayer games or solo.

You can also extend the concept of blockchain games to include a metaverse — a digital world — around your game. The metaverse is a world where players can team up, create a governance, and even create currencies as a means for value exchange. You can mint NFTs or form DAO within a digital game world.

Check out the NEAR docs to see how to build a frontend to consume the game’s smart contract created in this tutorial. The full codebase of the smart contract is available on GitHub.