Forget Express.js — opt for these alternatives instead 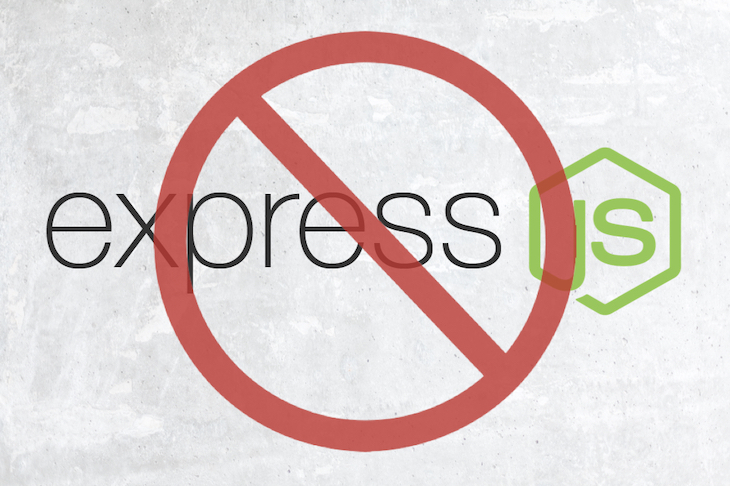 Node.js offers some powerful primitives when it comes to building HTTP servers. By default, you get a function that runs every time an HTTP request has been received by the server. The proverbial server example that parses an incoming POST request containing a JSON body looks a bit like this:

By default, Node.js allows us to run a function whenever any request is received. There is no built-in router based on paths. Node.js does perform some basic parsing — for example, parsing the incoming HTTP message and extracting different components like the path, header pairs, encoding (Gzip and SSL), etc.

However, the need for higher-level functionality means that we usually have to reach for a web framework. For example, if a multipart/form-data or application/x-www-form-urlencoded request is received, we need to use a module to handle decoding the content for us. If we want to simply route requests based on pattern matching and HTTP methods, we’ll need either a module — or, often, a full web framework — to handle this for us.

Express.js fairly early became the go-to framework for building web applications using Node.js. It scratched an itch that many developers had: it provided a nice syntax for routing HTTP requests, it provided a standardized interface for building out middleware, and it did so using the familiar callback pattern embraced by the core Node.js APIs and most of the npm ecosystem.

Express.js became so popular that it’s almost ubiquitously associated with Node.js — much like when we read about the language Ruby, we’re already conjuring up thoughts of the framework Rails. In fact, Express.js and Node.js are members of the popular MEAN and MERN stack acronyms.

Let’s take a look at what our previous example might look like when we bring Express.js into the picture:

In this example, we see that things get a little nicer. We’re able to specifically state the method and path we want to match by using app.post('/user'). This is much simpler than writing a big branching statement within the handler.

We’re also given some other niceties. Consider the res.json({}) method: this not only serializes an object into its JSON equivalent, but it also sets the appropriate Content-Type header for us!

However, Express.js still gives us the same paradigm that we get when using the built-in http module; we’re still calling methods on req and res objects, for example.

Let’s take a step back and look at what an ideal example of an HTTP server might look like. Routing is desirable, and Express.js has a powerful routing syntax (it supports dynamic routing patterns, for instance). However, the code that runs within the controller function is where we really want to clean things up.

In the above example, we’re doing a lot of work with asynchronous code. The request object is an Event Emitter that emits two events we care about, namely data and end. But, really, we often just want the ability to convert an HTTP request into a JSON object that we can easily extract values from.

Also, we’re given both a request (req) and a response (res) object. The req object makes sense — it contains information about the request we’re receiving. But does the res really make all that much sense? We only want to provide a result from our controller function as a reply.

With synchronous functions, it’s simple to receive a result from a function call: just return the value. We can do the same thing if we make use of async functions. By returning a call to an async function, the controller function can resolve a value that ultimately represents the response we intend for the consumer to receive.

Let’s look at an example of this:

There are a few concepts going on in this idealized example of ours. First, we’re maintaining the existing router syntax used by Express.js because it’s pretty solid. Second, our req object provides a helper for converting an incoming request into JSON.

The third feature is that we’re able to provide a representation of the response by simply returning a result. Since JavaScript doesn’t support tuples, we’re essentially recreating one by using an array. So with this fictional example, a returned string could be sent directly to the client as a body, a returned array can be used to represent the status code and the body (and perhaps a third parameter for metadata like headers), and a returned object can be converted into its JSON representation.

Now, it actually is possible to recreate some of this behavior with Express.js using a set of middleware.

The response tuple unwrapping can also be handled by middleware. Such a middleware would need to run after the controller code has run and would replace the array with a representation Express.js is expecting.

The ability to promisify the request body stream parsing can also be built in a generic manner:

With the above code, we can then await the parsing using Express.js (and really any other situation where we’re given an instance of an HTTP Request object):

It is true that we can reproduce some of these desired patterns using Express.js, but there are frameworks that have been built from the ground up with support for promises and the async/await paradigm. Let’s see what our example controller might look like when written using different web server frameworks.

Fastify, as its name implies, was built with the intention of being a very fast Node.js web framework. Despite its main goal of speed, it actually does a very nice job of achieving our ideal controller syntax.

This example is so terse that it almost feels like cheating:

Fastify not only supports async functions for use as controller code, but it also automatically parses incoming requests into JSON if the Content-Type header suggests the body is JSON. This is why the example code ends up being so tiny.

This also means that we can rely on Fastify to respond with a sane error when parsing fails. For example, when the client sends invalid JSON to Fastify, the response will look something like this:

Koa is a sort of spiritual successor to Express.js, having been written by some of the original Express.js authors. It does support async functions out the door, but it doesn’t come with a router of its own. We can make use of koa-router to provide routing.

This Koa example isn’t as succinct as the Fastify version. It doesn’t perform the automatic JSON parsing, but we’re able to reuse the requestBodyJson() method we created earlier. It also doesn’t use the returned/resolved value from our controller but instead works by consuming data attached to the ctx argument.

When Node.js was still in its infancy, Express.js became the obvious choice for building web applications. Express.js had the goal of being a convenient web server that followed the callback paradigm. It achieved that goal, and the product is now essentially complete.

However, as the JavaScript ecosystem has matured, we’ve gained new language tools and syntax. Dozens if not hundreds of frameworks have arisen since then, many of which have embraced these new language features.

If you find yourself working on a new project written in Node.js that acts as a web server, I encourage you to consider newer contenders such as Koa and Fastify instead of defaulting to the familiar Express.js.

Standard Liv Follow I'm a software engineer living in the Bay Area. she/her
« An overview of the top 10 React UI kits in 2019
The complete best practices for minifying CSS »

10 Replies to “Forget Express.js — opt for these alternatives instead”