for and while loops in Python 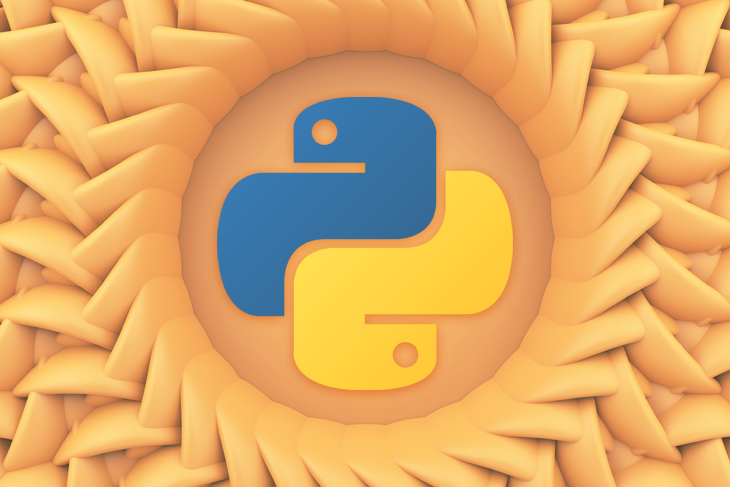 What are loops and when do you use them?

Loops are an essential construct in all programming languages. In a loop structure, the program first checks for a condition. If this condition is true, some piece of code is run. This code will keep on running unless the condition becomes invalid.

For example, look at the following block of pseudo code:

Here, we are checking whether the stomach_empty variable is true. If this condition is met, the program will execute the eat_food method. Furthermore, notice that we are typing the same code multiple times, which means that this breaks the DRY rule of programming.

To mitigate this problem, we can use a loop structure like so:

In this code, we are using a while statement. Here, the loop first analyzes whether the stomach_empty Boolean is true. If this condition is satisfied, the program keeps on running the eat_food function until the condition becomes false. We will learn about while loops later in this article.

To summarize, developers use loops to run a piece of code multiple times until a certain condition is met. As a result, this saves time and promotes code readability.

In Python, there are two kinds of loop structures:

In this article, you will learn the following concepts:

A for loop is a type of loop that runs for a preset number of times. It also has the ability to iterate over the items of any sequence, such as a list or a string.

Here, collection is a list of objects. The loop variable, i, takes on the value of the next element in collection each time through the loop. The code within loop body keeps on running until i reaches the end of the collection.

To demonstrate for loops, let’s use a numeric range loop:

The range(<end>) method returns an iterable that returns integers starting with 0, up to but not including <end> .

We can even use conditional statements in our loops like so:

This block of code will output all even numbers ranging from 0 to 9.

We can even use a for loop to iterate through lists:

In the above snippet, we created a list called names. Later on, we used the for command to iterate through the names array and then logged out the contents of this list.

The snippet below uses an if statement to return all the names that include letter ‘B’:

In some cases, you might want to create a new list based off the data of an existing list.
For example, look at the following code:

In this code, we used the for command to iterate through the names array and then checked whether any element contains the letter B. If true, the program appends this corresponding element to the namesWithB list.

Using the power of list comprehension, we can shrink this block of code by a large extent.

Here, expression can be a piece of code that returns a value, for example, a method. The elements of list will be appended to the newlist array if loop variable fulfills the condition.

In this code, we iterated through the names array. According to our condition, all elements containing the letter B will be added to the namesWithB list.

Notice that in this case, we don’t have a conditional statement. This means that conditions are optional.

This snippet of code will use a condition to get the list of even numbers between 0 and 9:

With the while loop, we can execute a block of code as long as a condition is true.

In a while loop, the condition is first checked. If it is true , the code in loop body is executed. This process will repeat until the condition becomes false.

This piece of code prints out integers between 0 and 9 .

Here’s what’s happening in this example:

We can use a while block to iterate through lists like so:

Here’s a breakdown of this program:

There are three loop control statements:

We can use all of these in both while and for loops.

The break statement is useful when you want to exit out of the loop if some condition is true.
Here is the break keyword in action:

The continue statement tells Python to skip over the current iteration and move on with the next.
Here is an example:

Here is a breakdown of this script:

Use the pass statement if you don’t want any command to run. In other words, pass allows you to perform a “null” operation. This can be crucial in places where your code will go but has not been written yet.

Here is a simple example of the pass keyword:

This will be the output:

Python allows us to append else statements to our loops as well. The code within the else block executes when the loop terminates.
Here is the syntax:

Here, one might think, “Why not put the code in code block immediately after the loop? Won’t it accomplish the same thing?”

There is a minor difference. Without else, code block will run after the loop terminates, no matter what.

However, with the else statement, code block will not run if the loop terminates via the break keyword.

Here is an example to properly understand its purpose:

This will be the output: 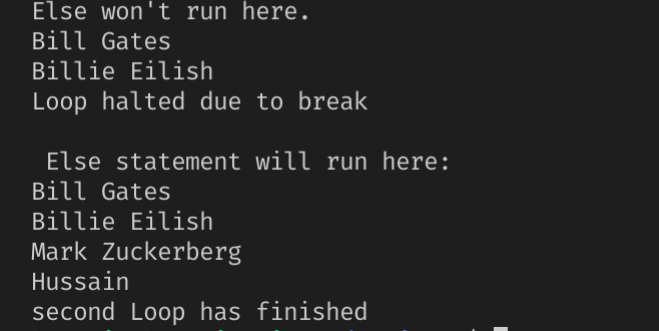 In this article, you learned how to use the for and while loop in Python programming. Moreover, you also learned about the fundamentals of list comprehension and loop altering statements. These are crucial concepts that help you in increasing your Python skills.

Hussain Arif Follow Hussain is a CS student in Pakistan whose biggest interest is learning and teaching programming to make the world a better place.
« What we can learn from GraphQLConf 2021
Comparing statically typed JavaScript implementations »