How to escape from memory leaks in JavaScript 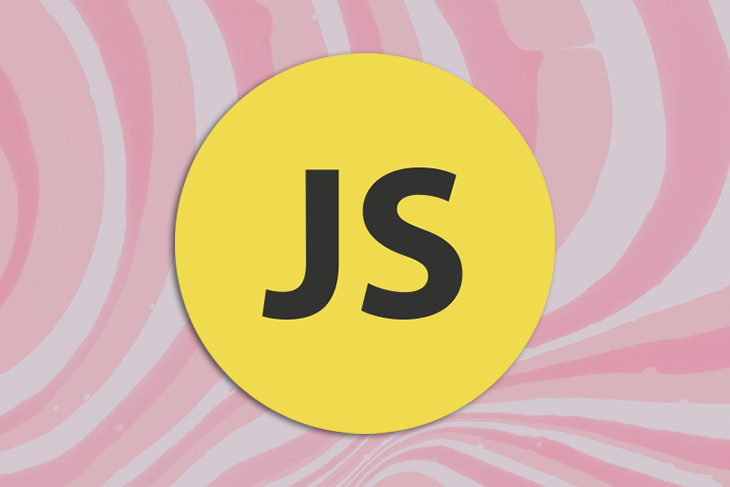 If your JavaScript application is experiencing frequent crashes, high latency, and poor performance, one potential cause could be memory leaks. Memory management is often neglected by developers due to misconceptions of automatic memory allocation by JavaScript engines, leading to memory leaks and, ultimately, poor performance.

What are memory leaks?

In simple words, a memory leak is an allocated piece of memory that the JavaScript engine is unable to reclaim. The JavaScript engine allocates memory when you create objects and variables in your application, and it is smart enough to clear out the memory when you no longer need the objects. Memory leaks are caused due to flaws in your logic, and they make way for poor performance in your application.

Before jumping into the different types of memory leaks, let’s have a clear picture of memory management and garbage collection in JavaScript.

In any programming language, memory lifecycle consists of three steps:

If you understand how memory allocation and release happens in JavaScript, it’s very easy to solve memory leaks in your application.

JavaScript has two storage options for memory allocation. One is the stack, and the other is the heap. All the primitive types, like number, Boolean, or undefined will be stored on the stack. Heap is the place for reference types like objects, arrays, and functions.

Stack follows the LIFO approach to allocate memory. All the primitive types like number, Boolean, and undefined can be stored under the stack: 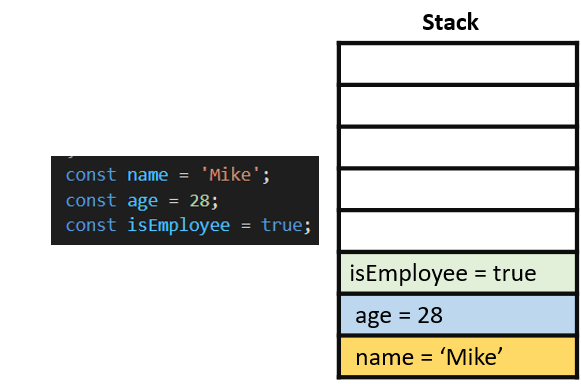 We’ve seen that the main challenge for memory allocation in the memory cycle is when to release the allocated memory and make it available for other resources. In this scenario, garbage collection comes to the rescue.

The main cause of memory leaks in an application is due to unwanted references. The garbage collector finds the memory that is no longer in use by the program and releases it back to the operating system for further allocation.

The reference count algorithm looks for objects that have no references. An object can be released if it has zero references pointing to it.

Let’s understand this better with the example below. There are three variables, student, otherStudent, which is a copy of student, and sports, which takes the array of sports from the student object: 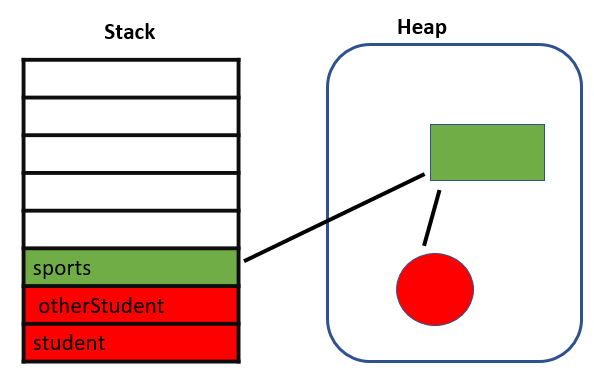 In the code snippet above, we assigned student and otherStudent variables to nulls, telling us these objects have no references to it. The memory that is allocated for them in the heap, which is in red , can be released easily as it has zero references.

On the other hand, we have another block of memory in the heap, which cannot be released because it has the sports object reference.

When two objects refer to themselves, there is a problem with the reference count algorithm. In simple terms, if there are cyclic references, this algorithm fails to determine free objects.

In the example below, person was assigned to employee and employee to person, so these objects are referring to each other: 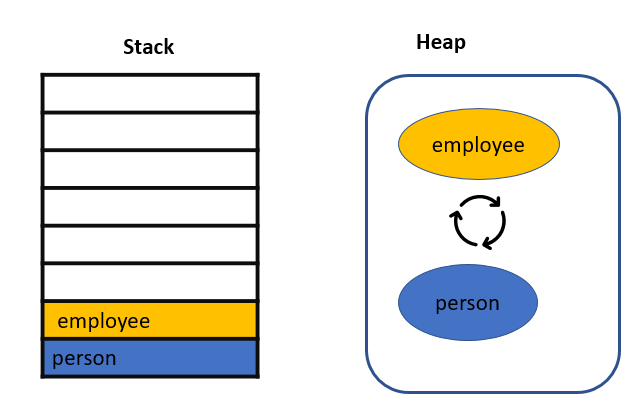 The mark-and-sweep algorithm reduces the definition of an unnecessary object to an unreachable object. If the object is not reachable, the algorithm considers this object unnecessary: 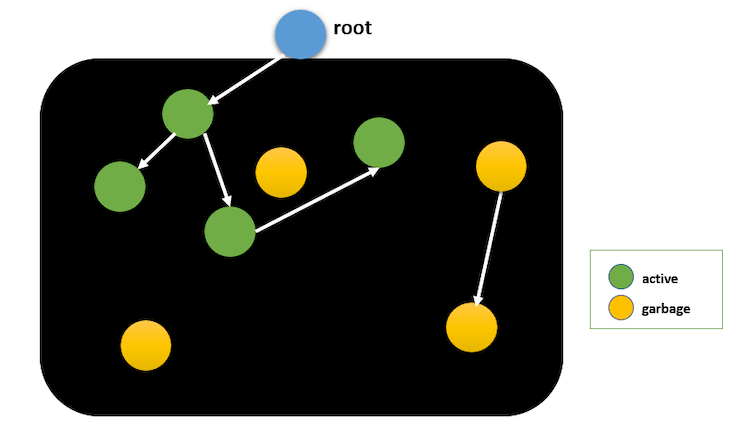 The mark-and-sweep algorithm follows two steps. First, in JavaScript, the root is the global object. The garbage collector periodically starts from the root and finds all objects that are referenced from the root. It will mark all the reachable objects active. Then, garbage collection frees the memory for all objects that are not marked as active, returning the memory to the operating system.

As we just saw in the mark-and-sweep algorithm, the references that are directly pointed to the root are always active, and the garbage collector cannot clear them, resulting in a memory leak:

As a solution, try to nullify these variables after use, or add use strict to enable a stricter mode of JavaScript that prevents accidental global variables.

A closure is a combination of a function bundled together or enclosed with references to its surrounding state, the lexical environment. In simple terms, a closure is an inner function that has access to the outer function’s scope.

In the example above, largeArray is never returned and cannot be reached by garbage collector, significantly increasing its size through repeated calls of inner functions, resulting in a memory leak.

Closures are unavoidable, so make sure the variables in the outer scope are either used or returned.

If we set the recurring timer in our code, the reference to the object from the timer’s callback stays active until the timer stops:

In the example above, generateRandomNumbers returns a function that appends random numbers to the outer scope numbers array. By using setInterval on this function, it calls on the specified interval periodically and results in a huge size for numbers array.

To solve this issue, best practice requires providing references inside the setTimeout or setInterval calls. Then, make an explicit call to clear the timers. For the above example, the solution is below:

Out of DOM reference

Out of DOM reference indicates nodes that have been removed from the DOM but are still available in the memory. The garbage collector cannot release these DOM objects since they are being referred to as object graph memory. Let’s understand this with an example below:

In the code above, we removed the child element from the DOM on click of the parent, but the child variable still holds the memory because the event listener is always active, and it holds the child reference. For this reason, the garbage collector cannot release the child object and will continue to consume the memory.

Debugging memory issues is really a tough job, but we can identify the memory graph and a few memory leaks using Chrome DevTools. We’ll focus on two important aspects of our daily lives as developers:

Let’s consider the following code snippet as an example. There are two buttons, Print Numbers and Clear. With a click on the Print Numbers button, numbers from 1 to 10,000 are appended to the DOM by creating paragraph nodes and pushing some huge strings to the global variable.

The Clear button will clear the global variable and override the document body but not remove the nodes created on clicking Print:

By analyzing the screenshot below, which is the performance timeline for the code snippet above, we can see that the JavaScript heap colored in blue spiked for every Print button click. These spikes are natural because JavaScript is creating the DOM nodes and appending characters to the global array.

The JavaScript heap gradually increased for every Print button click and became normal after the Clear button click. In a real-word scenario, you can consider there is a memory leak if you observe a continuous spike in memory, and if there is no decrease in memory consumption.

On the other hand, we can observe the continuous increase in the number of nodes, shown by the green graph since we didn’t remove them:

As we discussed earlier, a node is said to be detached when it is removed from the DOM tree, but some JavaScript code still references it.

Let’s inspect the detached DOM nodes with the code snippet below. With the click of a button, we can append list elements to its parent and assign the parent to a global variable. In simple terms, the global variable is holding the DOM references: 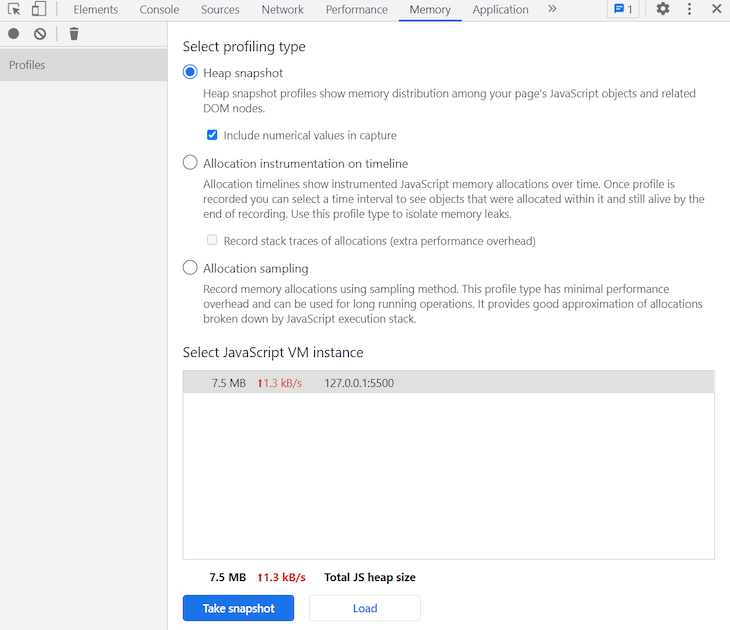 Once the button is clicked, take the snapshot. You can find detached DOM nodes by filtering Detached in the summary section, like below:

We explored Out of DOM nodes using Chrome DevTools. You can try to identify other memory leaks using this method.

In this tutorial, we learned about memory leaks, preventing them, and hunting memory leaks using Chrome DevTools.

Memory leaks are often caused due to flaws in your logic. Avoiding all the possible leaks can significantly improve your application’s performance and save memory. I hope you enjoyed this tutorial, and happy coding!

Sampath Gajawada Follow I'm a full-stack developer who always wishes to implement new and challenging elements in my daily life. Currently, my focus is on React and Vue.
« NestJS vs. Hapi
The ultimate guide to data types in Solidity »

3 Replies to “How to escape from memory leaks in JavaScript”