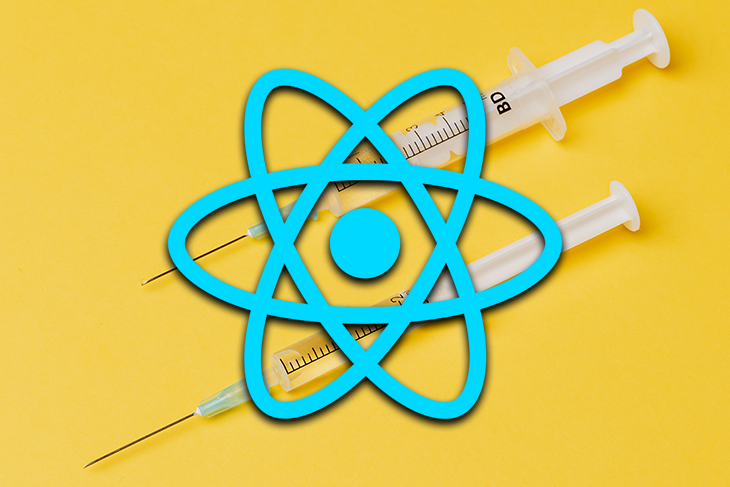 Dependency injection (DI) is a pattern where components necessary for your code to run are hot-swappable. This means that your dependencies are not hard-coded in your implementation and can change as your environment changes.

Enabled by inheritance, DI is a well-used pattern in Object-Oriented Programming (OOP) intended to make the code reusable across different objects and classes. The primary reason to use dependency injection in React, however, would be to mock and test React components easily. Unlike in Angular, DI is not a requirement while working with React, but rather a handy tool to use when you want to clean things up.

To illustrate the principles of DI, imagine an npm module that exposes the following ping function:

Using the ping function in a modern browser would work just fine.

But running this code inside Node.js would throw an error because fetch is not implemented in Node.js. However, there are many fetch implementations and polyfills for Node.js that we can use.

DI allows us to turn fetch into an injectable dependency of ping, like so:

We are not required to give fetch a default value of window.fetch, but not requiring us to include it every time we use ping makes for a better development experience.

Now, in a Node environment, we can use node-fetch in conjunction with our ping function, like so:

If we have multiple dependencies, it wouldn’t be feasible to keep adding them as parameters: func(param, dep1, dep2, dep3,…). Instead, a better option is to have an object for dependencies:

Our parameter deps will be spread into an implementation object and will override the functions that it provides. By destructuring from this modified object, the surviving properties will be used as dependencies.

Using this pattern, we can choose to override one dependency but not the others.

While working with React, we make heavy use of custom hooks to fetch data, track user behavior, and perform complex calculations. Needless to say that we do not wish to (nor can we) run these hooks on all environments.

Tracking a page visit during testing will corrupt our analytics data, and fetching data from a real backend would translate to slow-running tests.

Testing is not the only such environment. Platforms like Storybook streamline documentation and can do without using many of our hooks and business logic.

Take the following component, for example:

As mentioned before, running useTrack (and by extension, track) is something to avoid. Therefore, we will convert useTrack into a dependency of the Save component via props:

By aliasing our useTracker to avoid name collision and using it as a default value of a prop, we preserve the hook in our app and have the ability to override it whenever the need arises.

The name _useTracker is one naming convention out of many: useTrackImpl, useTrackImplementation, and useTrackDI are all widely used conventions when trying to avoid collision.

Inside Storybook, we can override the hook as such, using a mocked implementation.

When working with TypeScript, it is useful to let other developers know that a dependency injection prop is just that, and use the exact typeof implementation to retain type safety:

Dependency injection via the Context API

Working with the Context API makes dependency injection feel like a first-class citizen of React. Having the ability to redefine the context in which our hooks are run at any level of the component comes in handy when switching environments.

Many well-known libraries provide mocked implementations of their providers for testing purposes. React Router v5 has MemoryRouter, while Apollo Client provides a MockedProvider. But, if we employ a DI-powered approach, such mocked providers are not necessary.

React Query is a prime example of this. We can use the same provider in both development and testing and feed it to different clients within each environment.

In development, we can use a bare queryClient with all the default options intact.

But when testing our code, features like retries, re-fetch on window focus, and cache time can all be adjusted accordingly.

Dependency injection in React is not exclusive to hooks, but also JSX, JSON, and anything that we wish to abstract away or change under different circumstances.

Depending on the context, dependency injection might not be the right tool for the job. Data-fetching hooks, for instance, are better mocked using an interceptor (like MSW) instead of injecting hooks all over your test code, and outright mocking functions remains an advanced and cumbersome tool for bigger problems.

Why should you use dependency injection?

Reasons to use DI:

Reasons to not use DI:

In this article, we took a look at a library-free guide to dependency injection in JavaScript and make the case for its use in React for testing and documentation. We used Storybook to illustrate our use of DI, and finally, reflected on reasons why you should and shouldn’t use DI in your code.