Deep dive into the CSS :where() and :is() functions 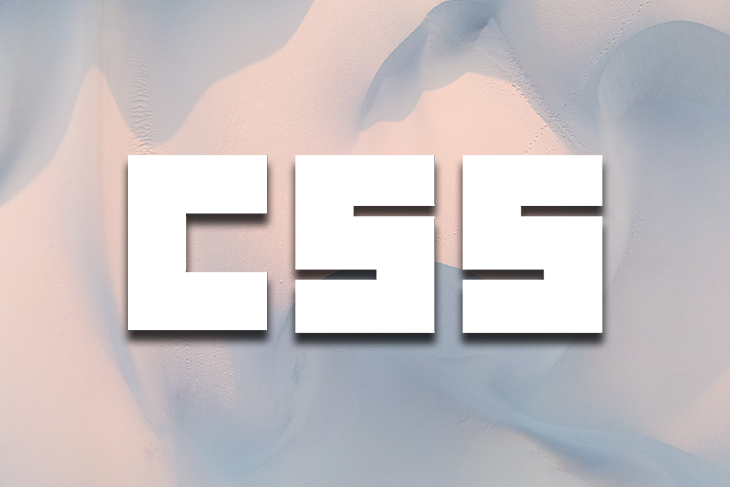 Editor’s note: This deep dive into the CSS :where() and :is() functions was last updated on 4 January 2023 to update any outdated information, include sections on the :is() function, and discuss browser compatibility.

The CSS :where() function takes in a list of selectors as arguments and minifies them, allowing you to write less code and simultaneously style them all together.

In this tutorial, we’ll discuss the :where() pseudo-class function and demonstrate how it can be used in production. We’ll review stacking, specificity, and forgiving in relation to the :where() function. We’ll also look at some specific use cases and discuss its similarities and differences from the :is() function. Let’s dive in!

According to MDN, :where() is a CSS functional pseudo-class selector that takes in a list of selectors as an argument and applies the given styles to any element from that list. :where() is very useful for making a long selector list shorter.

In CSS, when multiple elements have the same style rules applied to them at the same time, we often end up writing a long list of selectors separated by commas.

Here’s an example in which we apply the same style to all <a> tags found inside a header, main element, and footer element:

There are only three elements that we are selecting in the above code snippet, but with a larger number of elements and selectors, the code will begin to look untidy and may become difficult to read and understand. This is where the :where() pseudo-class function comes into play.

Here’s how the above example would look using the :where() function:

Let’s take a closer look at how this code works.

When the browser gets to the code snippet, the code directs the browser to look for header, main, and footer selectors and target all the anchor tags in those selectors. Then, when a user hovers over any of those anchor tags, the browser should apply the specified styles, which in this case are red and underline.

This pseudo-class function gives us the luxury of writing a long selector list in such a way that is shorter and more readily understandable.

Combining, dividing, and stacking the :where() function

Here’s an example with multiple selectors and styles:

Here’s the same code, rewritten with the :where() function:

We divided the third list into two :where() functions for better clarity. In this list, we specify that the button and a element should be styled with the .dark-theme, .dim-theme, and purple.

Now, we’ll even further reduce the third list functions, morphing them into one :where() function:

This strategy for reducing a complex selector list is referred to as stacking.

Specificity and the :where() function

Specificity is what browsers look at to determine what CSS property values or styles should apply to a particular element.

In the code snippet above, there are three ordered lists with two items in each list. The second and third lists have a given class, whereas the first list does not.

Without any styling, we can see that each list is ordered numerically: 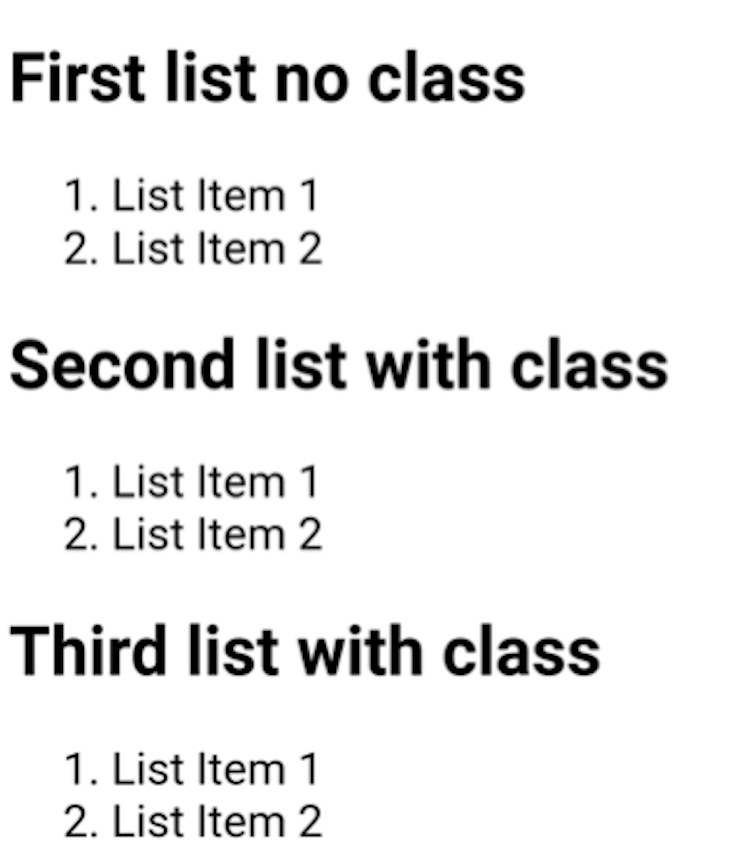 In the above snippet, we use the :where() pseudo-class function to select all <ol> tags that have a class applied.

Below, we see that the second and third lists, which both have a class, were targeted with the :where() function and had their list-style-type removed: 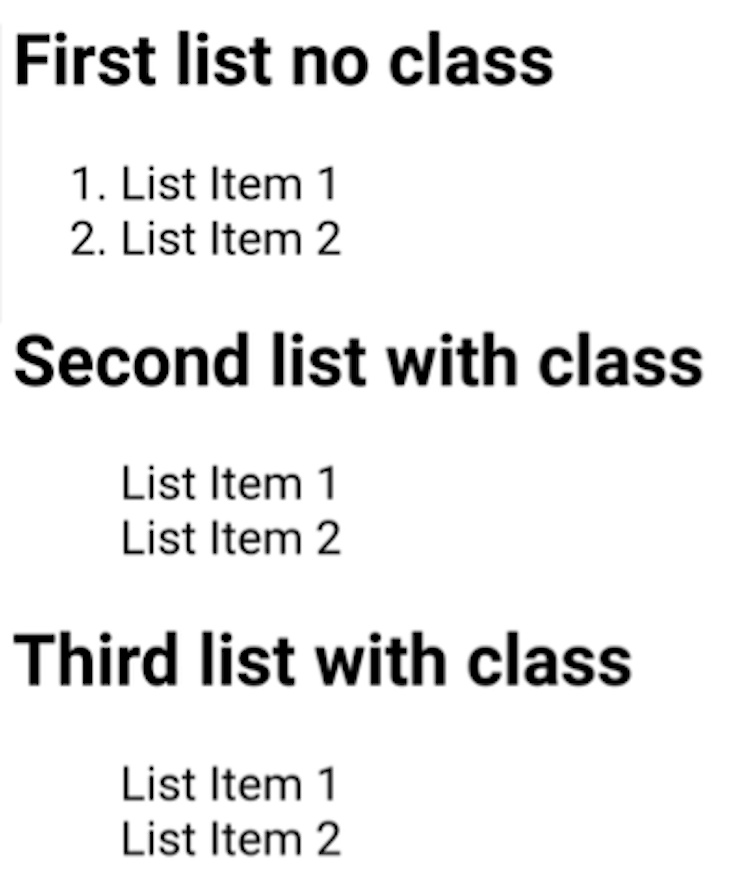 Targeting only the second list using its class name, we can see that it is now displayed with bullet points, while the third list still has no list-style type: 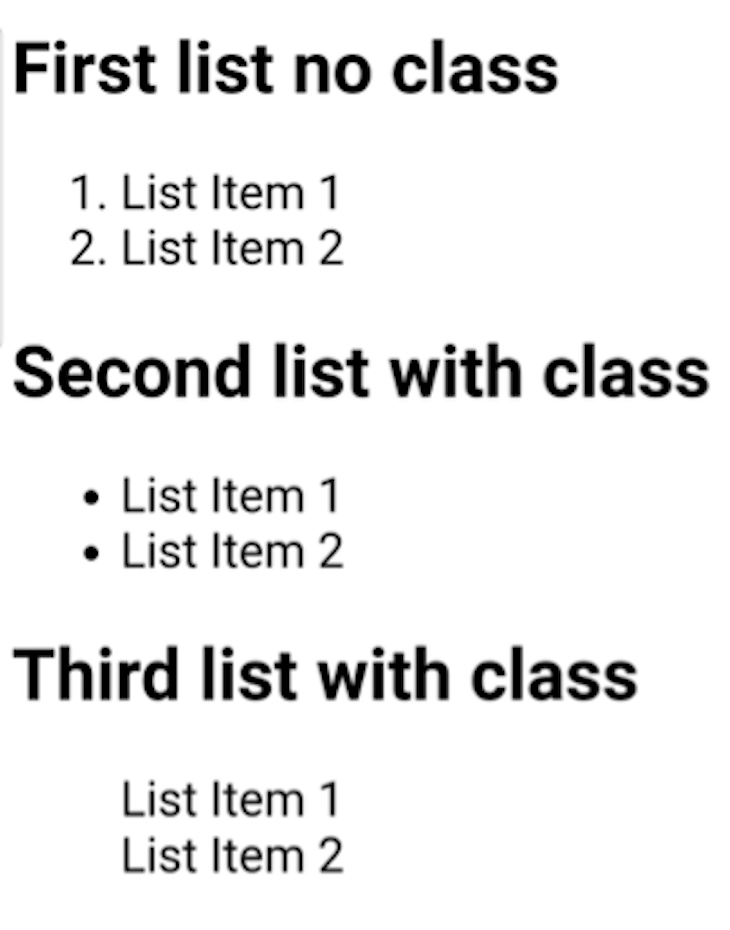 You might be wondering, “Isn’t that how it’s supposed to be, seeing as the new styling is written below the :where() function styling?” No, it’s not, and we’ll see that in a moment.

Let’s see what happens when we move the code we just added to the top of the code block and move the :where() function portion to the bottom: 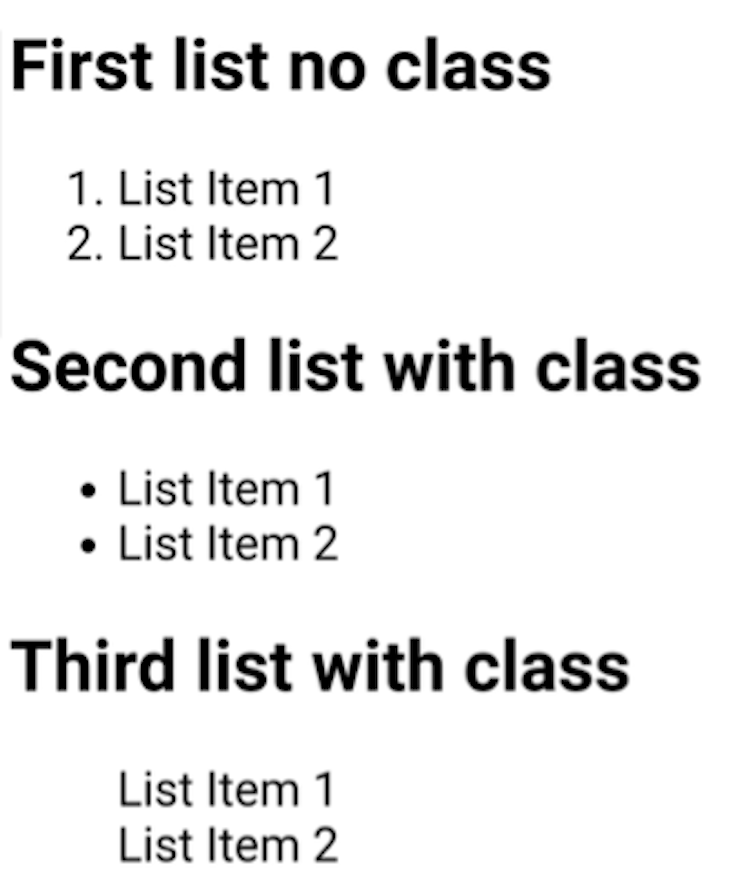 To illustrate this further, let’s add the second list’s stylings to the third list, following the :where() function in the code:

Both the second and third lists are displayed with bullet points, irrespective of code placement: 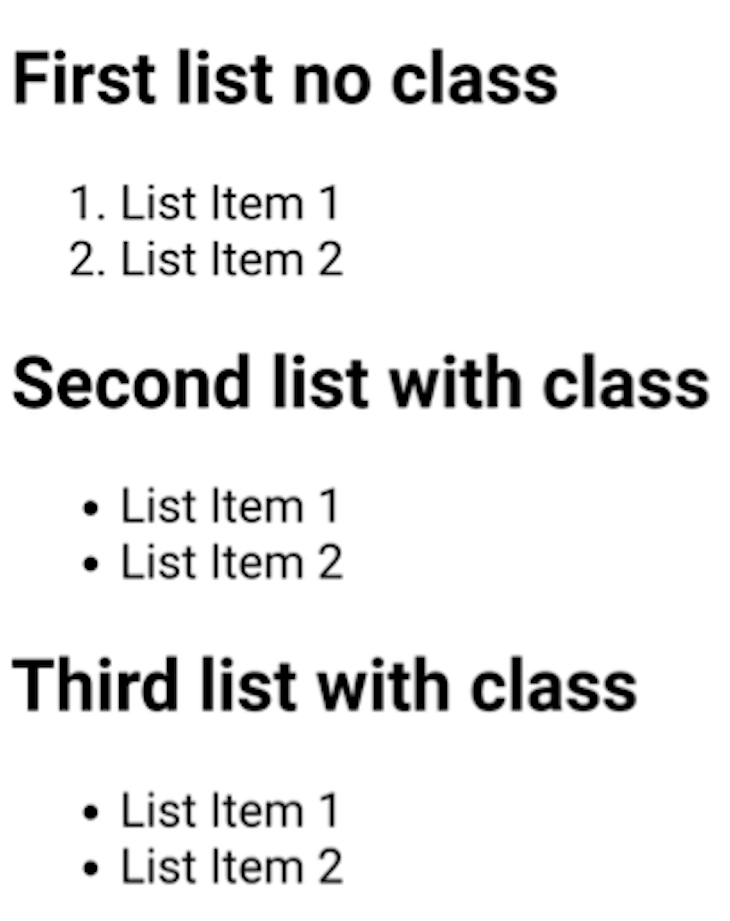 See the Pen
Using the CSS :where() function by Timonwa (@timonwa)
on CodePen.

See the Pen
Using the CSS :where() function by Timonwa (@timonwa)
on CodePen.

Now, let’s look at how the CSS :where() function will react if one of the elements is targeted with an invalid selector.

The :where() function and forgiving

CSS is generally considered to be non-forgiving with regard to selector lists. If a browser does not recognize just one selector in a list, the entire list of selectors will be considered invalid, and their styling will not be applied. However, this is not the case with the :where() pseudo-class function.

However, the following code will be ignored in browsers that don’t support the :unsupported selector, even if they support the :valid selector:

Special use cases for the :where() function

The :where() function can be a useful tool in some special use cases, but there are also some instances in which it should be avoided. Nearly all setbacks that occur when using the :where() pseudo-class function come down to specificity. Because :where() has zero specificity, we need to be very careful about where and when to use this function.

First, let’s look at a few use cases in which :where() can be particularly helpful.

A CSS reset refers to loading a set of style rules prior to any other styles in order to clear the browser’s inbuilt styles. CSS resets are usually placed at the top or start of the CSS style sheet, so they load first. Developers often use them to remove the default stylings given by the browser to several elements initially before they start actually styling their elements and websites. CSS resets can also help remove inconsistencies between different browsers.

CSS resets are temporary stylings that would change later on in the styling process. However, depending on the simplicity or complexity of the selectors of an element or group of elements used in the CSS reset, it may be difficult to override the initial stylings later on in the code.

For example, let’s say we target all anchor tags on the website and style them in green. Then, we later decide to style all footer anchor tags in gray.

The new (gray color) style does not get applied due to the complexity of its selection in the CSS reset. The selector in the reset has a higher order of specificity than the selector used later in the code to target just the footer anchor tags, so the gray color style is not applied.

Now, if we add the :where() pseudo-class function to the CSS reset, this automatically gives all elements in the reset a specificity of zero. This makes it easier for us to change the styles later on without having to worry about specificity conflicts.

The :where() function can be useful if we want to remove or nullify the styles or reduce the specificity of an element or set of elements. The change will occur at the point that we place it in our code, almost like a mini reset.

Shorter code is easier to read and debug. A good rule of thumb is to examine any code that has more than two commas or three list items to see if it could be minified using the :where() function. This is also a helpful strategy for combinations of two or more selectors; for example, section > header > p > a.

Now, let’s look at a use case in which the :where() function should be avoided.

If it is important to ensure that the styling or specificity of an element or set of elements does not change at any point in the future, do not use the :where() pseudo-class. The styling and specificity of any element targeted with this selector will be nullified.

The CSS :is() function

It is also forgiving, just like the :where function. So, when one of the selectors is invalid, that selector will be ignored by the browser, but the stylings of the valid selectors will be added to the selected elements.

The difference between :where() and :is() functions

The first selector gives the text a color of blue. The second selector which uses :is() has the same specificity as the first, but because it comes after the first one, it changes the text color from blue to green. The third selector, whose specificity is lower than both the first and second, has no effect on the text.

Lastly, the fourth one, which uses the :where() function has no effect on the text because of its zero specificity:

See the Pen
Using CSS :is() function by Timonwa (@timonwa)
on CodePen.

See the Pen
Using CSS :is() function by Timonwa (@timonwa)
on CodePen.

All browsers, both on desktop and mobile, provide full support for the CSS :where function, including support for its forgiving nature. So you do not have to worry about whether your styling will render properly in the browser.

The CSS :where() pseudo-class function is very useful for improving CSS resets, removing styling at any point in our code, and making our code easier to read and debug.

In this article, we demonstrated how the :where() function can be used in production and examined several use cases. We also saw its similarities to the CSS :is function and the difference between them.

What are your thoughts on this CSS selector? Can you think of any other instances in which it would be useful? Let us know in the comments below.

Pelumi Akintokun Follow Frontend developer and technical writer who is passionate about the web. Creator of websites that tell stories.
« Building an app with Qwik
How to effectively manage product risks as a product manager »

One Reply to “Deep dive into the CSS :where() and :is() functions”