A deep dive into CSS specificity 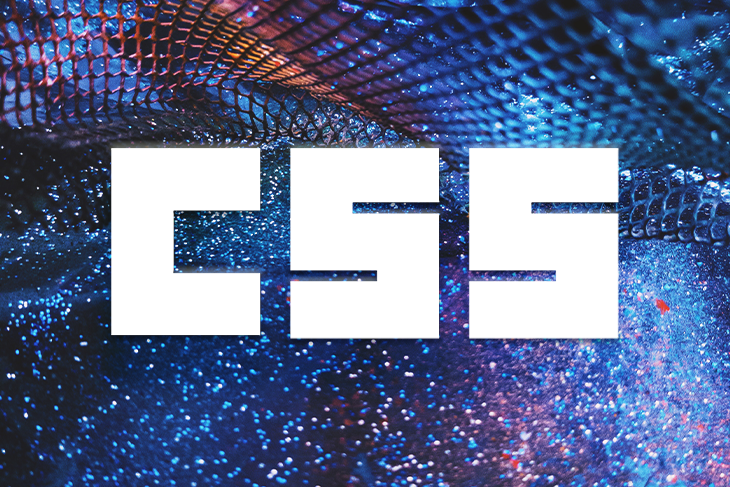 Every CSS developer should be familiar with three key CSS concepts: cascade, inheritance, and specificity. Specificity is a CSS method for resolving conflicts when selectors with different style rules are applied to the same element. Specificity is an essential component of CSS, and understanding how it works will save you a lot of time and trouble when debugging.

In this article, we’ll cover the following:

What is CSS specificity?

The importance of specificity cannot be overstated. As developers, we occasionally make mistakes and attempt to target an HTML element more than once. Specificity determines which of the selector’s style rules will be applied to the element. Having a good understanding of specificity means you’ll be able to find and address issues faster and with less effort.

How does specificity hierarchy work?

Specificity involves creating score to rank or compare selectors. The selector with the highest score will have its style rules applied to the element. An exception to this rule, which we’ll discuss later in this article, comes into play when the !important property is applied to a selector.

N.B., there is also a universal selector (denoted by the * character) which is used to apply a CSS style to all HTML elements on a page. The universal selector has a specificity of zero; therefore, its style rules will be overridden whenever there are conflicting selectors 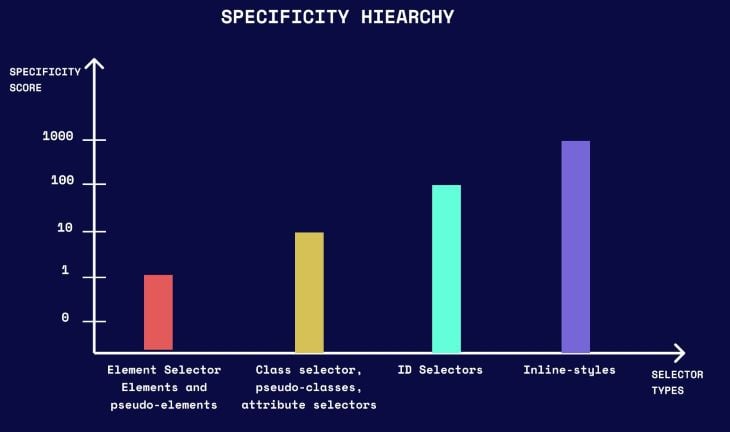 Now, let’s review another visual representation to help us fully grasp the concept of specificity.

In this example, we’ll take a closer look at the following selectors: 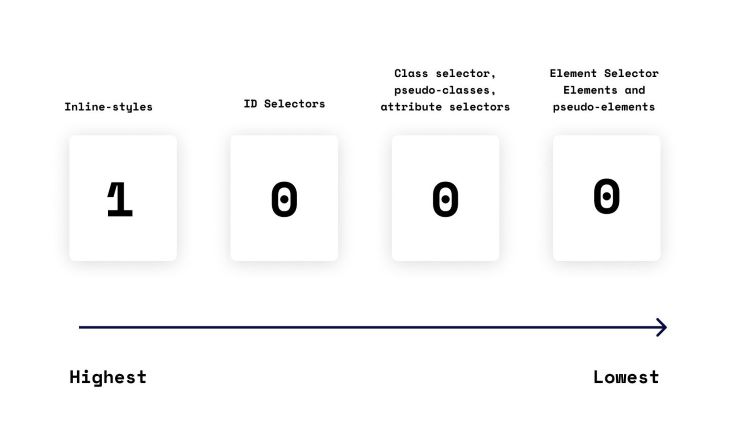 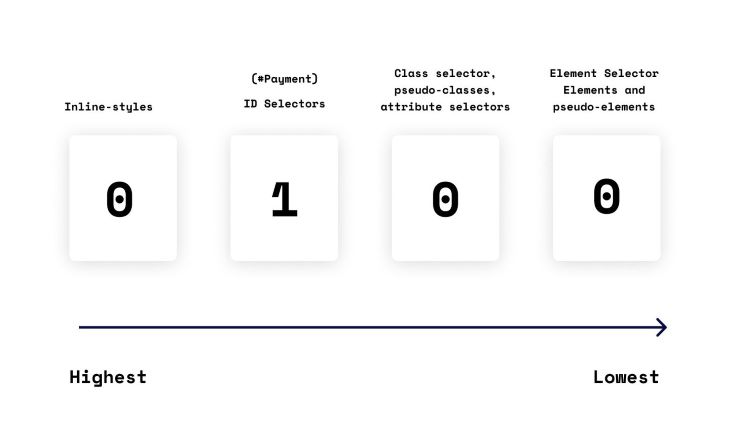 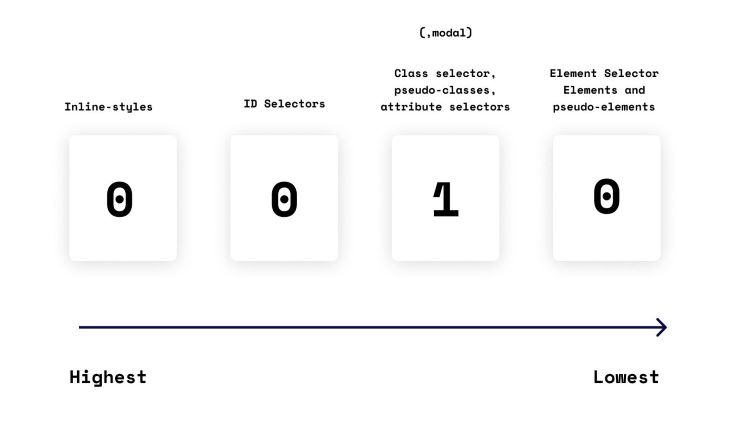 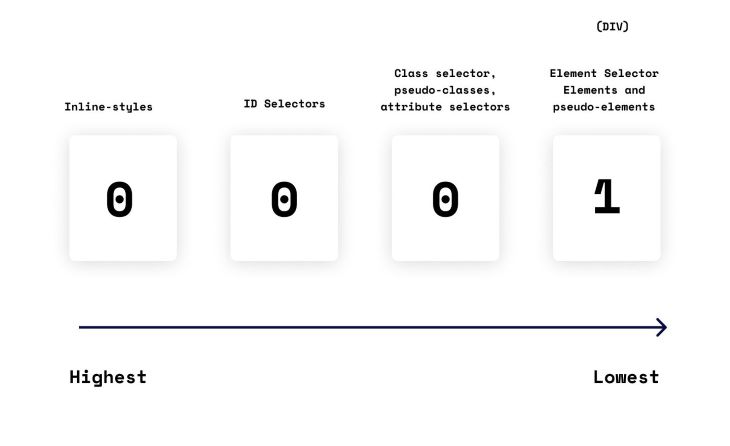 How is specificity calculated?

The “Calculation” column in the below table shows the summation of the individual selector specificities. The “Specificity value” column shows the total calculated specificity for the multiple selectors.

Here’s an example of a simple modal:

Which of these two selectors do you think will be applied to the p element? If you chose the second selector, you’re correct! Here’s why:

It’s important to understand that the second selector wins in this case because it has a higher score, not due to the order in which it appears in the cascade.

A common misconception with CSS is that selectors are applied according to a cascade. This is not entirely correct. To illustrate this point, here’s a live example with the same two selectors, except this time the #desc-text selector is placed before the modal .desc p selector in the cascade.

As you can see, despite the change in order of appearance, the style of the #desc-text selector is still applied to the p element, as this selector has the highest specificity score:

It is also worth noting that the CSS cascade rule only takes effect when the conflicting selectors have an equal specificity score. In that case, the style rule of the selector that comes last in the cascade will be applied.

In the below example, both selectors targeting the element have the same specificity. Therefore, the CSS cascade rule comes into play and the last selector’s style rules are applied to the element:

Our calculations up to this point show, in simple terms, how a selector is given a specificity score and how that score is used to weight a selector.

What is the !important rule exception?

When two declarations with the !important rule conflict on the same element, the declaration with the greater specificity is applied.

In this example, the class selector will have the style rule applied to the element because it has a higher specificity score than the element selector.

If two declarations with the !important rule have the same specificity, then the declaration that comes later in the cascade will win. Cascade comes into play when specificity no longer has enough deciding power.

What is proximity ignorance?

Proximity ignorance simply means that it doesn’t matter how deeply nested a selector is compared to the referenced element, as this has no effect on specificity.

In this example, it doesn’t matter that the p element is in close proximity to the div element. This does not have an effect on its specificity. Both selectors have the same specificity score; therefore, the CSS cascade rule takes effect and the last selector is applied.

In the below example, the #parent selector has a specificity score of 100. However, its style rule will not be applied to the p element because it is an inherited style.

In this article, we discussed what CSS specificity is and how it works. We reviewed how to calculate a specificity score and looked at examples for individual and multiple selectors. We also covered the !important rule exception and proximity ignorance.

Specificity is one of the main pillars of CSS and a very useful concept to understand. A deeper knowledge of specificity will help you quickly specify which selector’s style rules should be applied to a particular element and will also help you identify and address development bugs faster.

Nelson Michael Follow Nelson Michael is a frontend developer from Nigeria. When he's not meddling with CSS, he spends his time writing, sharing what he knows, and playing games.
« Using the UUPS proxy pattern to upgrade smart contracts
A deep dive into custom Vue directives »