Vitali Zaidman Follow I've been a web and mobile developer since 2012, recently focused on leading the development of large React.js websites. I like to lead and tutor teams as a hands-on expert, as well as maintain open-source projects, give lectures, participate in podcasts, and write about web technologies.

Debugging React performance issues with Why Did You Render 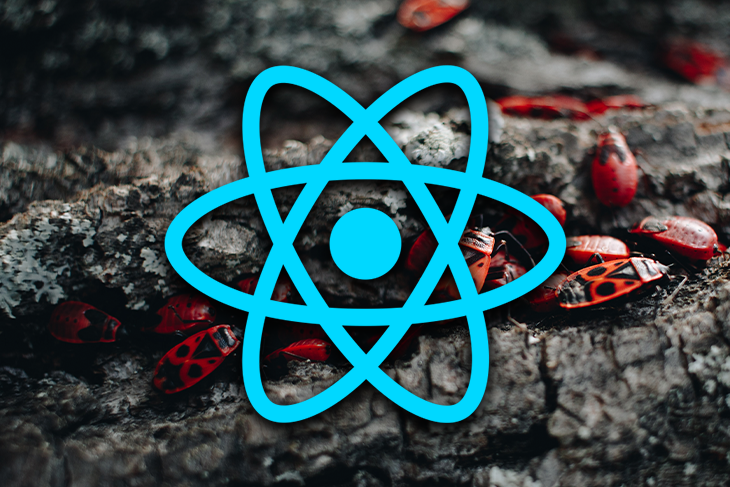 React is lightning fast. Often, it’s fast enough to make it hard to re-create performance issues in a sandbox on our machines. Consequently, we might believe that our web app will run smoothly, no matter what we do.

But your app’s speed and performance matter and have a major effect on conversion rates.

If we don’t analyze performance, because of our relatively strong machines and internet connections, we will not know about performance issues that hurt our users and subsequently hurt our conversion rates.

This article will present a sandbox with a performance issue caused by a small React anti-pattern. Then, I’ll show you how it can be detected using the library Why Did You Render and how to resolve the issue.

The following app simulates a header that changes its size as the user scrolls. A list with many rows is used to represent a medium-to-large application.

Note: In practice, we would want to make such a long list a virtual list, but in our case, we only use it to simulate an application.

Our app has performance issues with the animation of the header’s height change while scrolling.

Here is the sandbox:

To reproduce the performance issue on powerful machines, I suggest slowing the browser down artificially by throttling the CPU. You can do that in Chrome using the Performance tab.

It’s great practice to use this important tool to run your app this way when working on performance issues to see how things work on slower devices:

Can you detect what causes the performance issue in the code?

Detecting the bug with Why Did You Render

The usual way to spot the issue is by using React or Browser dev-tools. Many great articles demonstrate how to debug that in-depth.

In short, we open the browser dev-tools (in this case, Chrome’s dev-tools, but other modern browsers have similar features) and record a few seconds while reproducing the issue: 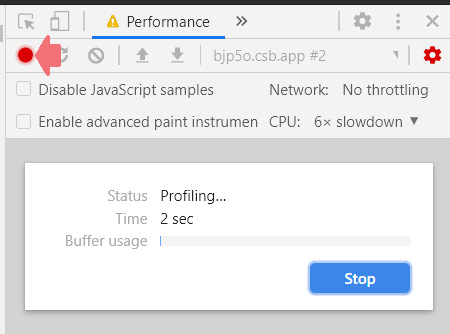 Then we stop the profiler. We can immediately see that the Main component, with its many children, re-renders on every single scroll event, causing janks in the application. 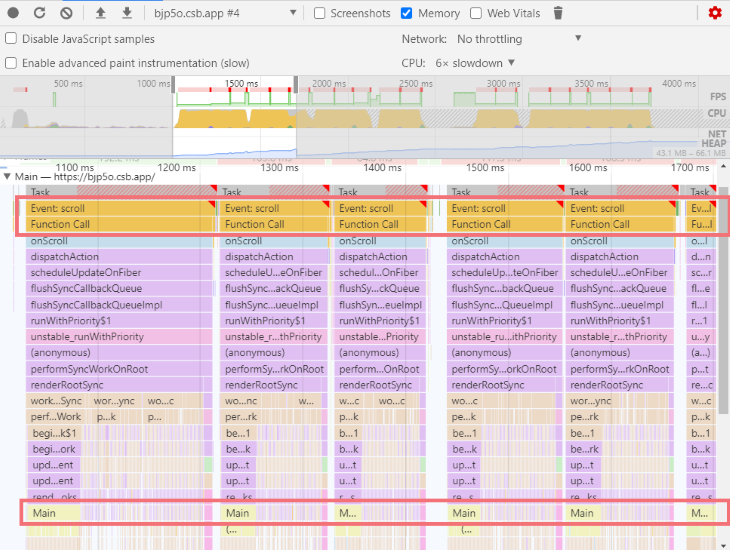 But before we jump to the code and try to understand what’s wrong with Main, let’s try Why Did You Render.

What is Why Did You Render?

Why Did You Render is a library created by Welldone Software that detects why a component in your app is re-rendering through monkey-patches in React and will notify you about potentially avoidable re-renders.

Note: Make sure not to add the library in production, as it slows React and even might cause it to break in certain edge-cases. Only turn it on when you debug performance issues.

First, we add the library from npm:

Next, we add a wdyr.js file to the root of our project:

And third, we import wdyr.js as the first import of our application in index.js:

For a detailed installation guide, look at the readme.

Here is a sandbox with the library installed. Now, if you scroll through, you will get the following information in your console:

As you can see, we get a very clear picture of why Main got re-rendered. Based on this information, we can infer that the problem is caused by a widespread React anti-pattern when dealing with pure components.

When a scroll happens, the hook useHeaderScroll causes App to re-render. This re-render causes the Main element to be re-created:

Now, because Main is a pure component, it wasn’t supposed to re-render when App re-renders, because seemingly, its props are the same as in the previous render of App. However, in reality, the style prop is a new object on every render:

An easy solution to the performance issue would be to pass only the relevant value to Main instead of the style object.

Main will no longer re-render because its only prop is always paddingTop={350}.

Now we just have to make sure that Main is adjusted accordingly to expect paddingTop as a prop instead if style:

You can find the corrected application without performance issues in the following sandbox.

Using Why Did You Render can help identify bugs in your React app very effectively, even in places one would not normally look for them. It also reports in great detail so you can know exactly what went wrong. My suggestion is to at least run your initial page load with it to see how can you speed it up in minutes. Thanks for reading.

Vitali Zaidman Follow I've been a web and mobile developer since 2012, recently focused on leading the development of large React.js websites. I like to lead and tutor teams as a hands-on expert, as well as maintain open-source projects, give lectures, participate in podcasts, and write about web technologies.
« Theming Vue.js with styled-components
SSG vs. SSR in Next.js »