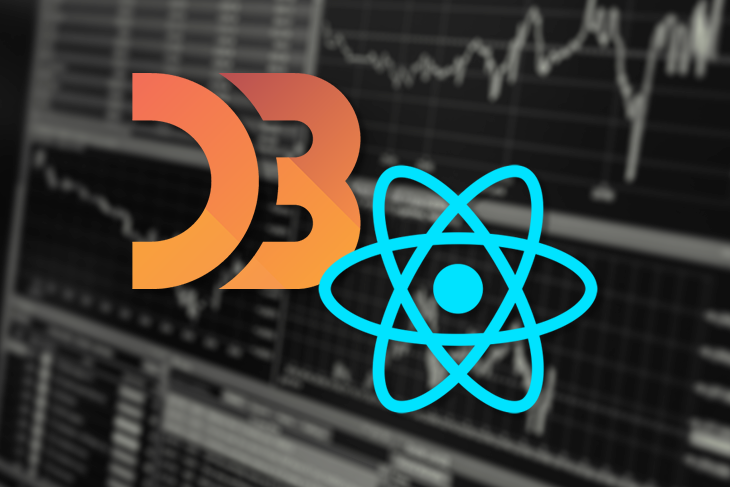 Editor’s note: This React D3 tutorial was last updated in November 2020. For a closer look at the most recent stable release, check out our guide to using D3.js v6 with React.

React and D3.js are JavaScript libraries that enable developers to create engaging, reusable data visualizations such as area charts, line graphs, bubble plots, and so much more.

Although React and D3.js is an extremely popular pairing among frontend developers, the two libraries can be challenging to use in tandem. In this tutorial, we’ll show you how to use D3.js in React, discuss why you should use D3, and demonstrate how to make a chart in React with D3.

What are D3.js and React?

D3.js is a JavaScript library for creating dynamic, interactive data visualizations using HTML, CSS, and SVG. It binds data to the DOM and its elements, enabling you to manipulate visualizations by changing the data. The most recent release is D3.js v6.

While its focus on web standards enables you to harness the full capabilities of modern browsers without restricting yourself to a proprietary framework, D3.js and React are commonly used together to bring dynamic data visualizations to life.

React.js is an open-source frontend JavaScript library for building intricate user interfaces and UI components. It is a declarative, efficient, and flexible framework that allows you to build complex UIs composed of simple, reusable components. These components are capable of maintaining their state by themselves.

For a visual guide to help you get started with React and D3.js, check out the video tutorial below.

Why you should use D3.js

Data visualization helps you communicate information clearly and efficiently using shapes, lines, and colors. There are many tools available on the web, but D3.js has won the confidence of countless frontend developers, making it the de facto choice for data visualization in JavaScript.

D3.js is lightning-fast and supports large datasets and dynamic behaviors, enabling you to foster user interaction using animations and other eye-catching features.

How to use D3.js in React

D3.js and React can be challenging to use together because both libraries want to handle the DOM. They both take control of UI elements and they do so in different ways.

We’ll show you how to get the most out of React and D3’s distinct advantages by building a simple bar chart using the two libraries. First, we need to install React and D3.js.

To set up React, use the Create React App boilerplate. Run the following to install it globally on your local machine so that it can be reused:

Next, create a new app using the create-react-app template:

Change the directory in the newly created project:

You can add the D3 library to your app either using the CDN or by installing via npm, as shown below:

Now, we are all set to start using D3.js to make data visualization in React.

To preview the app just created on your default browser, run the code below:

How to make a chart in React with D3.js

Open the created project with your favorite text editor and navigate to src/App.js.

This is the component that is currently rendered in the browser. We need to remove the content of the render() method so we can replace that with our own content.

In the src folder, create a new JavaScript file named BarChart.js. This is where we’ll build the bar chart that will be rendered.

Setting up a bar chart with D3 and React

To start, add the following code to the file:

We’ll use the ComponentDidMount lifecycle method to display the bar chart when the BarChart component is mounted in the DOM.

Add the following to the BarChart component:

The drawChart is the method where we’ll do all of our D3 magic.

Normally, when using D3.js without React, you do not have to put your D3.js code in a method, but this is important in React to ensure that the chart displays only when the component has been mounted on the DOM

Next, we’ll create the drawChart method:

First, we defined a variable, data, which contains the data we want to visualize.

Next, we defined an SVG using D3.js methods. We’re using SVG because it’s scalable — that is, no matter how large the screen is or how much you zoom in to view the data, it will never appear pixelated.

d3.select() is used to select an HTML element from the document. It selects the first element that matches the argument passed and creates a node for it.

In this case, we passed the body element, which we’ll change later to make the component more reusable.

The append() method appends an HTML node to the selected item and returns a handle to that node.

The attr method is used to add attributes to the element. This can be any attribute you would normally add to the HTML element, such as class, height, width or fill .

We then appended an SVG element to the body element with a width: 700 and height: 300.

Under the SVG variable we created, add the following code:

Just like the select method, selectAll() selects the element that matches the argument that is passed to it. That way, all elements that match the arguments are selected, not just the first.

Next, the data() method, is used to attach the data passed as an argument to the selected HTML elements.

Usually, these elements are not found because most visualizations deal with dynamic data and it is nearly impossible to estimate the amount of data that will be represented.

The enter() method rescues us from that bottleneck as it is used alongside the append method to create the nodes that are missing and still visualize the data.

So far we have created nodes for each data point. All that’s left is to make it visible.

To make it visible we need to create a bar for each of those datasets, set a width and update the height of each bar dynamically.

The attr method allows us to use a callback function to deal with the dynamic data:

We modify our SVG variable to become:

For the x, each index of the data point in the array is multiplied by a constant integer, 70, to shift the position of each bar by 70.

y has a constant value, which we’ll change soon.

The width also has a constant value of 65, which is less than the position of each element on the chart, to create a space between each element.

The height of the bar depends on the value of each entry in the data set.

Manipulating data with D3.js and React

Now we have created a bar chart. However, we have two issues:

To resolve these issues, we’ll multiply each datum by a constant value of, say, 10 to increase the size of each bar without affecting the data:

Next, we solve the issue of the bar being inverted, but before that let’s understand why the chart is inverted in the first place.

The SVG position goes from top to bottom, so using a y attribute of 0 puts each bar at the top edge of the SVG element.

(10 * d) is the height we got from our previous calculation.

Putting it all together, the BarChart component will be:

We now have a basic bar chart. Let’s do a little extra and add labels.

Adding labels to a bar chart

To add labels, add the following code to the drawChart function:

This is similar to what we did for the bars but this time, text is appended instead. 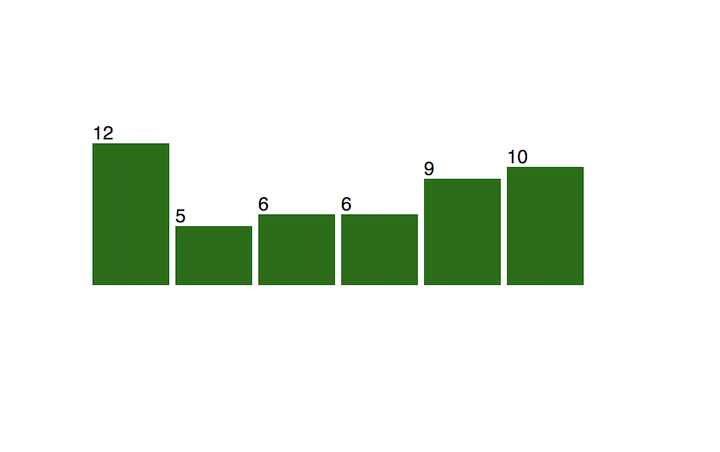 How to make a chart reusable in React and D3.js

One of the important principles of React is to make components that are reusable.

To do this, we need to remove the provided data and then pass it to the component through props.

The width and height of the SVG will also be passed via props:

And the width and height attribute change from:

In our App.js file, we can now use the component and pass the data we want from the parent component.

This way, we can reuse the bar chart anywhere we want in our React app.

11 Replies to “Using D3.js with React: A complete guide”