The complete guide to blockchain testing 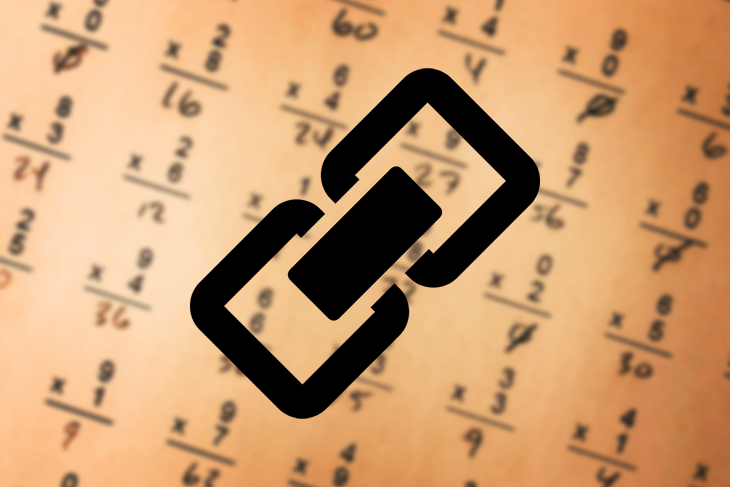 Organizations all over the world are turning to blockchain technology to improve data storage, security, and management. This has resulted in the need to ensure that applications built on the blockchain network are thoroughly tested.

In this article, we will discuss what blockchain testing is all about, including the benefits and drawbacks, the types of blockchain testing, the phases, and some useful tools. We will also create and test a smart contract using some of the recommended testing tools.

What is blockchain testing?

Blockchain testing aids in the development of various quality stages, ranging from system performance to the security of the blockchain application.

According to Santu Maity, Enterprise Architect at IBM, the best approach for blockchain testing encompasses the entire environment. This includes blockchain-based applications, both mobile and web, that interact with the blockchain system’s functional component, like an API, smart contracts, and nodes.

Blockchain testing ensures that all entities involved in a blockchain network have been properly validated for operation. As a result, it provides organizations with a secure and functional infrastructure.

Blockchain testing aids in the delivery of quality products, thereby improving user experience. It also eliminates flaws in a decentralized system where money is involved in order to prevent financial damage.

One of the most significant challenges is a lack of testing tools. Currently, there are few testing tools available for each blockchain framework; therefore, using the wrong tool can cause problems.

Another issue in the blockchain ecosystem is a lack of professional expertise. Because blockchain technology is still relatively new in the tech world, it has not seen widespread adoption among software developers.

Yet another challenge is testing strategy. Blockchain testing necessitates a thorough knowledge and understanding of how blockchain works.

The security of the blockchain network can also be difficult. Blockchain applications are now being used in a variety of economic sectors. As a result, data security is critical for preventing nefarious activities.

The inability to provide an adequate performance and load testing provides little or no knowledge on the performance of blockchain applications under certain conditions.

The following is a comprehensive list of the types of testing one can perform on a blockchain:

The initiation phase is the first stage of testing a blockchain system. Here, the testers become acquainted with the system’s lifecycle by analyzing and comprehending its functionality, allowing them to gain a better understanding of all components involved. A detailed map is generated that includes all of the system components and subcomponents, as well as all of the interfaces, to provide a good understanding of how the system works overall.

In the design phase, the key components of the system that must be tested are identified, and a well detailed test strategy tailored to the blockchain system is developed. This test strategy describes the system’s test cases and test environment specifications.

If the system is not available, alternative testing strategies must be devised. Setting up a private blockchain for testing is an alternative test strategy. API testing, functional testing, performance testing, security testing, and so on are examples of these tests.

This is the final phase, which includes a report on the overall test performed in the system. System performance, low level check, and validation of blocks, transactions, and smart contracts are the fundamental exercises that must be executed during this phase.

An open source testing library, it is simple to implement and has manageable API support for a variety of testing requirements.

This tool is primarily used to locally test Ethereum contracts. It generates a blockchain simulation that allows anyone to test multiple accounts.

Exonum TestKit specializes in testing the activity of the entire service of the blockchain application. We can use the tool to perform API testing and transaction execution without having to worry about network operations or consensus algorithms.

Corda is an open source, distributed ledger platform based on blockchain technology. Contract testing, integration testing, flow testing, and load testing are all made easier with the built in testing tool.

Truffle is a blockchain testing tool with features that go beyond basic testing, such as working with Chai and Mocha. It is a well known name among Ethereum developers for identifying amazing testing features, such as automated contract testing.

The Populus framework includes Ethereum’s testing functionality, which is well integrated as a set of properties focused toward contract deployment testing. These frameworks are mostly built around the pytest framework, allowing for its very simple implementation.

Now let’s move on to the tutorial section of the article. Here, we will develop and test a sample smart contract with Truffle now that you’ve grasped the basics of blockchain testing.

In this example, we will create a car tracking system for an auto shop. We will cover the following:

Setting up the environment

To work with Truffle, you’ll need to have the following software installed on your computer:

Run the following command in your terminal once they’ve been installed successfully:

The command above will install Truffle globally on your computer. Type “truffle version” in the terminal to see if Truffle is installed correctly.

Create a new project directory with the following:

The above command will generate the following directory structure for Truffle:

contracts/, which contains the smart contract source codes, written in Solidity. Inside this directory there’s an important contract called Migrations.sol.

migrations/. Deployment of smart contracts is managed with the migration system. It is used to monitor changes in the smart contract.

test/ is where test codes and files for the smart contracts are kept. Tests can written in either Solidity or JavaScript.

truffle-config.js is the Truffle configuration file where you can define your deployment network for deploying your smart contracts.

In the contracts/ directory, create a new file called Auto.sol and add the following:

pragma solidity ^0.8.9; indicates the minimum version of Solidity required. The pragma command means “additional information that only the compiler cares about”, while the caret symbol (^) means “the version indicated or higher.”

When writing Solidity, data types like array and strings must be declared. Solidity provides a special data type called address, which is also an Ethereum address stored as 20 byte values. This address can be used to send and receive Ether.

Within the contract Purchase{ scope, we define a public variable called borrower with an address type and a length of 20, which is an array of Ethereum addresses. Always remember to add a semicolon (;) at the end of every statement, to avoid an error.

Now let’s create a function that allows users to make a borrow request. Below the variable declaration, add the following:

According to the code above, the function accepts an integer (uint) parameter carId and is expected to return an integer as the output. The require() statement is used to ensure that the carId is within the buyer array’s range. Because arrays in Solidity are indexed from zero, the carId value must be between zero and 19.

If the carId is within the range, the address from which the call was made is added to our buyer array, which is denoted by msg.sender. We then return the carId that was passed.

Next we write a function that get all the buyers, like so:

We return the buyer as a type address[20] memory which contains the variable’s data location. view in the function declaration indicates that the function will not change the state of the contract.

Following that, we must compile our Solidity code so that the Ethereum Virtual Machine (EVM) can understand it.

Open the terminal in your project’s root directory and type the following command:

Artifacts are .json files that serve as a JavaScript wrapper for interacting with the corresponding smart contracts.

Now that the contract has been successfully compiled, it’s time to migrate it to the blockchain.

A migration is a deployment script that is used to change the state of your application’s contracts, moving them from one state to the next.

However, in order to deploy the smart contracts with migrations, we must first gain access to their artifacts, which were generated as a result of the Truffle compile command. Inside the migration directory is a default migration file 1_initial_migration.js that handles deployment of the Migration.sol file.

Lets create our own migration configuration file, 2_deploy_contract.js, with the following:

The artifacts.require() method is used to specify the smart contract to use for interacting with the blockchain. Because a source file may contain multiple contracts, we specified the name of the contract definition rather than the name of the .sol file. In this case we use Purchase rather than Auto.

The migrations are then exported as a function with a parameter (deployer). The object deployer is responsible for staging deployments. Next, we deploy PurchaseContract.

Next, we will be using another blockchain testing tool called Ganache to provide an interface to deploy our smart contracts and carry out tests. You can either download or use the command line npm i -g ganache-cli.

If you are using Ubuntu OS, you might find it difficult to run the Ganache application. Simply right-click on the application file, go to properties, then to permissions and tick allow executing file as program. Then re-run the application.

I will be using the Ganache GUI for this tutorial. Run the application and select quickstart. The following image will be displayed on the screen: 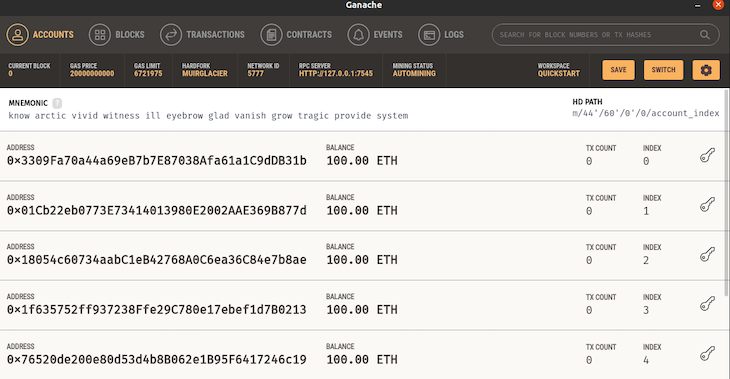 After a successful migration, you will see the following:

Now go back to your Ganache application: 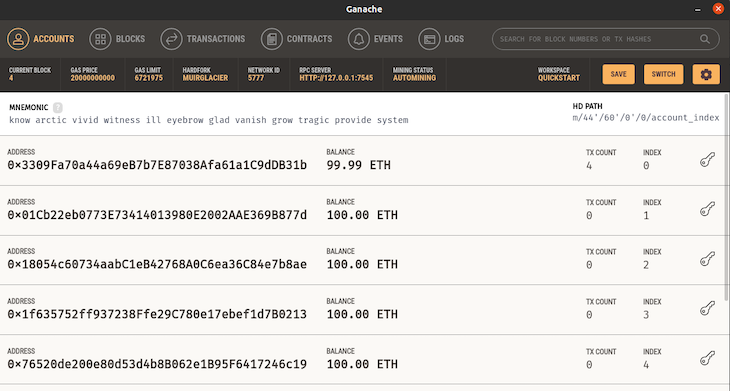 You will notice the current block, which was previously zero, is now four. Also, the first address started with 100 Ether, now it has 99.99 Ether. This is due to the transaction costs of migration.

There are two methods of testing smart contracts in Truffle. The first is by using Solidity and the second is by using JavaScript. For this tutorial, we will be using the JavaScript method.

In the test directory, create a new file purchase.test.js and write the following:

First, we use the artifacts.require() method to import our Purchase contract. Then we declare a contract and pass in our Purchase instance as the first argument, followed by a callback function as the second.

The parameter for the callback function is accounts. The accounts provides the network’s available accounts. We use before to ensure that the purchased car with ID 4 is assigned to the first account.

We then run a test to see which address purchased the car with ID 4. To compare the actual value (buyer) and the expected value (expectedBuyer), we use the assert.equal method. If the test fails, the error message is printed to the console.

Now we test our contract by running the following command:

If the test passes, you should see a similar result below:

As blockchain adoption grows, the need to deliver high quality products cannot be met without investing in blockchain and blockchain testing expertise.

Blockchain testing ensures that all components in the system are working properly and that all applications are interacting with it in a trustworthy manner.