Building a responsive dashboard with Base Web and React 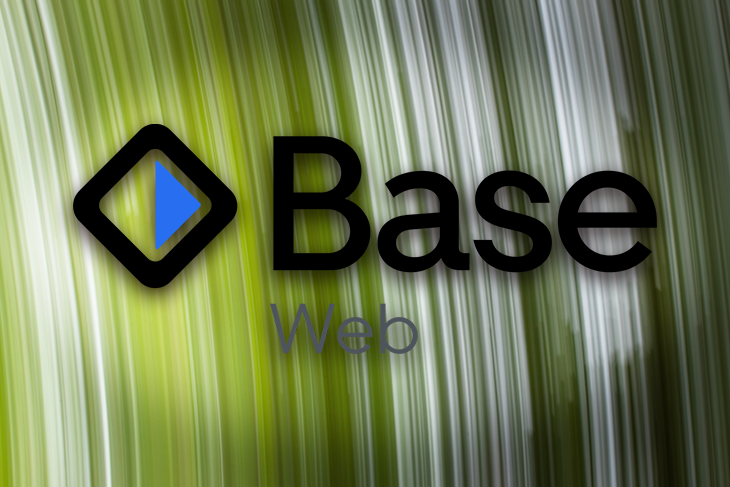 Creating dashboards can be difficult for developers, especially when they must be responsive on all devices. To make dashboards easier to implement, many devs use predefined components, or UI libraries and style guides, to make the work faster and easier.

A standout example of these is Base Web (in npm as baseui), a design system and UI library created by Uber to help devs create beautiful, device-agnostic apps. Base Web consists of a series of React components and is designed to be “reliable, accessible, and extensively customizable.”

In this article, we’ll be looking into Base Web, its origin, my personal experience with it, and what makes it different from other UI libraries. Finally, we will play around with Base Web by implementing a simple dashboard in React to demonstrate its simplicity and function.

Before we can get to the fun part, there are a few prerequisites that you should have in order to follow along with this tutorial. They are:

What is Base Web?

Base Web is a React UI framework that was created with robust components out of the box to help make UI implementation easier. Base Web is consists of complex components such as Data-Table, Input, and Datepicker, among others.

What’s so special about Base Web?

The following are the features of Base Web that I find most useful.

With the introduction of themes and the override API, Base Web becomes easy to customize, which actually includes changing the components to suit your taste. This level of customization accepts modifying the component or creating your own style guide on Base Web.

Base Web uses super-fast Styletron, a CSS-in-JS engine to run and power the styling.

The Base Web community is getting bigger day by day, which helps with the quality of products associated with it. It’s also easy to find answers to any questions you might have while working with it.

What’s the difference between Base Web, Ant Design, MUI, and reactstrap?

There are many different UI libraries in the React ecosystem, which can make things complicated, especially when we are trying to select the library that is best for our specific use case. In this section, we will be comparing Base Web to Ant Design, MUI, and reactstrap.

Base Web and Ant Design are known to offer a robust suite of components, while MUI offers premium themes. Reactstrap, which was designed to work with Bootstrap, also has plenty of prebuilt components.

From my own perspective, Base Web components like Data Table, Drag and Drop List, Grid Table, and Payment Card are unique among other libraries, which makes it particularly useful. I should also mention that choosing the best library is dependent on your project’s specific component requirements. Before working with a UI library, you should make sure it has the components you want.

Support for TypeScript as been one of the main issues many JavaScript libraries face, because most are written for JS and require restructuring to support TypeScript, while others support previous versions of TypeScript but need an update to support newer versions.

Luckily, Base Web supports TypeScript without any extra configuration. Ant Design and reactstrap also support TypeScript, but you may need to install an additional library in order for it to function properly. Finally, MUI still has a few issues with TypeScript, so I wouldn’t advise using it in this case.

Setting up Base Web

Firstly, we need to create a React project in order to build our example dashboard. To do so, run this command on your preferred terminal:

This will install all necessary dependencies and create the project folder structure. After successful installation, open the project with your favorite text editor.

Next, install the required dependencies for Base Web with the following:

After installation, open your App.js file and paste the following code inside:

In the code block above, we are importing Styletron (the styling engine for Base Web) and BaseProvider, which will save the style state and LightTheme.

After a successful setup, you should see something like this: 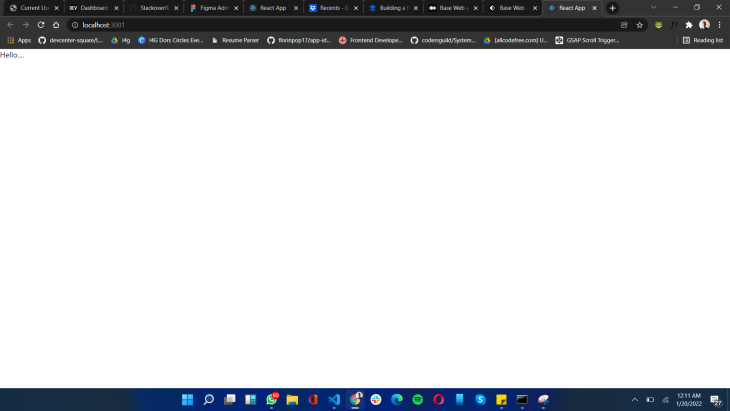 Implementing a responsive dashboard with Base Web

Start by creating a folder called components. This will be where we house the components for the dashboard.

Let’s start writing our UI. Go to App.js and replace the “Hello…” text with the following:

Then, import the component at the top like so:

Add a logo (any image you like) inside the images folder with the name logo.svg. Then, add the following code inside the constant.js file:

This code contains an array, which is the list of menu items for the sidebar. It uses icons from the react-icons library to pair with the menu text.

Now open your sidebar.js file and paste this code inside:

In the code above, we are using the useStyletron and style properties to create styles for a dynamic and responsive sidebar. Then, we created a styled component for the SidebarWrapper and the logo, and some inline styling using the CSS prefix generated from the useStyletron Hook.

SideNavListItem which was imported in the code block above will be created next by following the steps below.

Open the SideNavListItem.js component and add the following code:

For the styling, the styled component is taking in the active state as a prop which has been used to write a condition to check if the component is active or not.

Now open the dashboard.js file and add the following code:

In the code above, we created a DashboardWrapper style to serve as the container for the dashboard. The Sidebar, dashboardHeader, and dashboardContent have been imported, and an open state was created. This has been passed as a prop to the Sidebar and dashboardHeader components to control how the sidebar behaves on phones.

Now, open dashboardHeader and pass in the following code:

Looking at the code above, some components have been imported from baseui/header-navigation, which has been used to set up the header section.

The components are as follows:

To create the dashboard content (which includes a table), we will add the necessary data in a constant.js file. Open the file and add this code below:

This array serves as the content for the table header. To create the data for the table body, paste the code below into tableTitles:

The code above contains the content of the table.

Let’s quickly look at the last component, which is the DashboardContent. Open the component file and add the following code:

In the code above, the table component is used to display the information in tabular form.

If you followed these instructions correctly, you should have something like this: 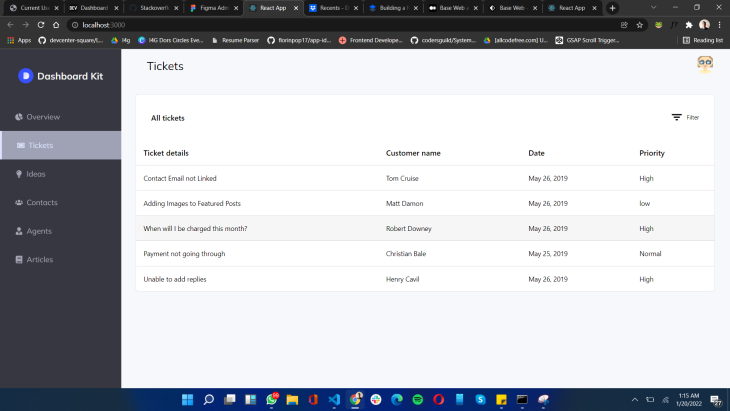 In this article, I demonstrated how powerful the Base Web library is, including its limitations. I believe that it’s hard to create a fully customized dashboard without the use of additional CSS, but the library flexibility makes it interesting to work with. It also increases the possibility of expansion in the future, as the community surrounding Base Web is growing very fast. If you’re interested, you can find the source code for this article here.

Emmanuel Yusuf Follow Frontend developer with a demonstrated history of working in the design industry. Skilled in React, JavaScript, HTML, CSS, Redux, Firebase, Next.js and Figma.
« Using Redis pub/sub with Node.js
What to expect from ES2022 »