Building an image picker in Flutter 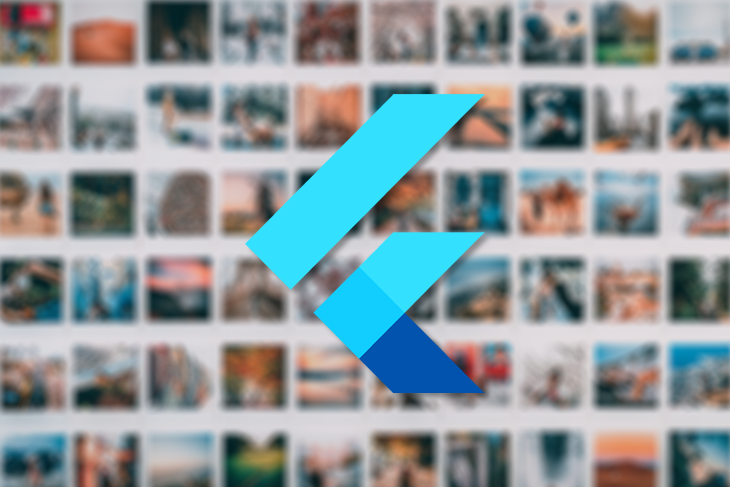 An image picker is one of the most widely used components in any app. Many popular apps, such as Facebook, Twitter, Instagram, WhatsApp, etc., have an image picker that enables users to select files from their device to use as a profile picture or share with their friends.

The image_picker plugin exposes some helpful methods from the ImagePicker class it exports:

The picker instance has public methods that we’ll call to open the image selection dialog. Let’s look at these methods.

The pickImage method opens the choose dialog and displays the phone’s gallery from which to select the image. The source arg states where the image is to be picked from.

Here, the source is set to ImageSource.gallery, so the image is selected from the user’s gallery.

This method allows the user to pick a video from the camera. The arg source: ImageSource.camera opens the phone’s video camera so the user can record the video. The recorded video is then used as the picked video.

pickMultiImage enables the user to pick multiple images. The arg source: ImageSource.gallery allows us to pick the images from the phone’s gallery.

Now that we’ve reviewed the methods in the image_picker plugin, let’s build an example Flutter image picker app to see how they work in practice.

Before we start, make sure you have the following tools and binaries already installed in your machine.

This creates a Flutter project in a folder called imagepickerprj. A series of commands will cascade down our terminal. At the end of the terminal, you’ll see instructions for running the newly generated project:

We won’t run it now, but let’s move it inside the folder:

The next step is to add the image_picker plugin to our Flutter project.

Open the pubspec.yaml file and add the image_picker to the dependencies section:

In our imagepickerprj project, our main file resides in the lib/ folder. This is the main.dart file, which is the entry point of any Flutter project/app. So that is where we’ll start to add most of our code.

Flutter has some code set for us already, but we won’t need it except in the MyApp widget. Let’s start there:

Our Flutter image picker app will have two screens:

In the build method, we see that it renders two buttons, as we stated earlier: Pick Image from Gallery, and Pick Image from Camera. Each button has an onPressed event set on it. The events call the _handleURLButtonPress method when the buttons are pressed.

Inside the ImageFromGalleryExState widget, we have the following variables:

We also have an initState method, which is inserted into the widget tree first. We use this method to initialize and create the instance of the ImagePicker class and then assign it to the imagePicker variable.

This Image.file is a widget that is used to render images from the local storage of a device.
If there is nothing in the _image variable, we render the Container widget. This Container displays a camera icon.

The GestureDetector is the parent to all these widgets. It has an onTap event registered to it. This event is fired when the widgets inside this GestureDetector are tapped on. The onTap handler calls the pickImage method from the imagePicker instance. It deduces the source of the image from the type variable and passes it to the pickImage method. It then passes the quality of the image (imageQuality: 50) and, lastly, the preferred camera device preferredCameraDevice: CameraDevice.front. This causes it to choose the front camera of our phone.

This will cause the ImageFromGalleryExState to rerender and the Image.file will display the image in the _image variable.

Now that we’re finished with the code, let’s test-run our app.

Open your Android Emulator and, from your terminal, run the following command:

This will compile and build the project and then run the app inside your Android Emulator.

If you’re using VS Code, you can either run the above command or simply right-click the lib/main.dart in your editor and then click either run Without Debugging or Start Debugging.

The app will open up in your Android Emulator. 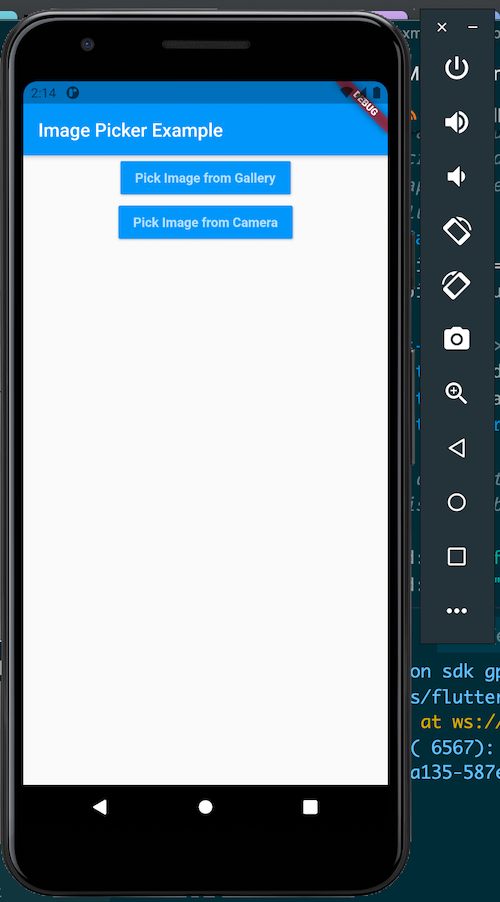 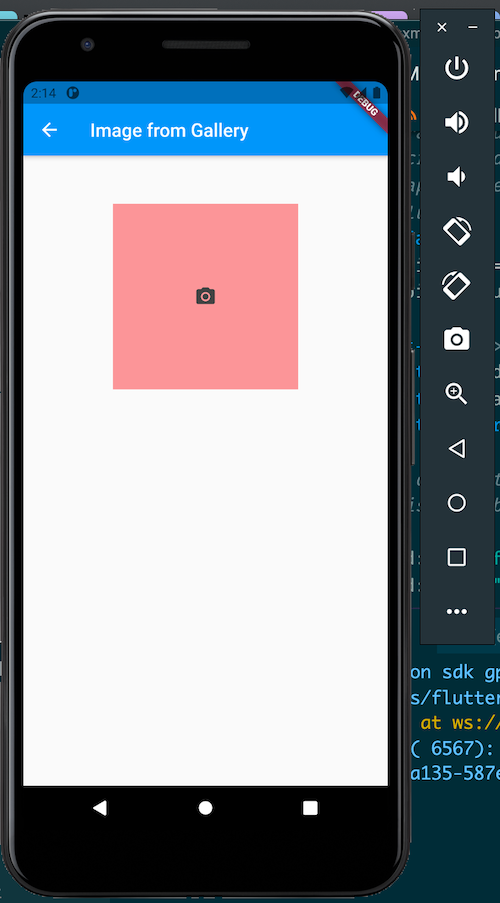 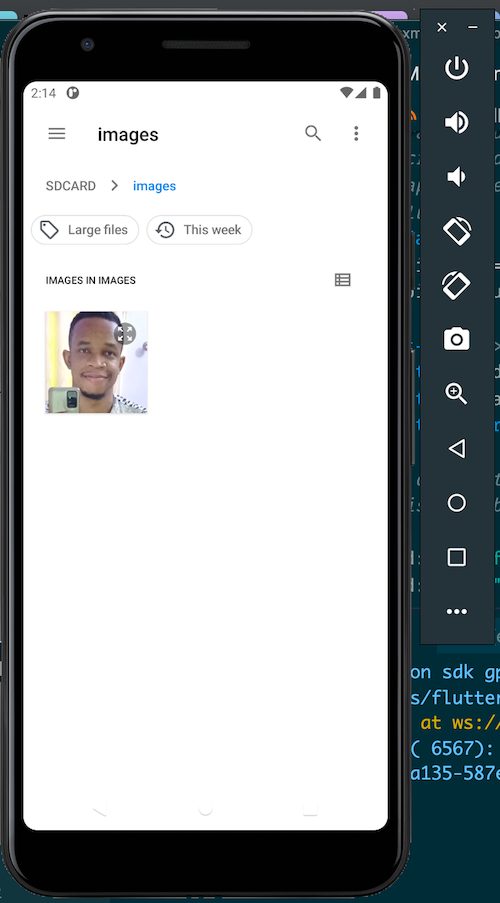 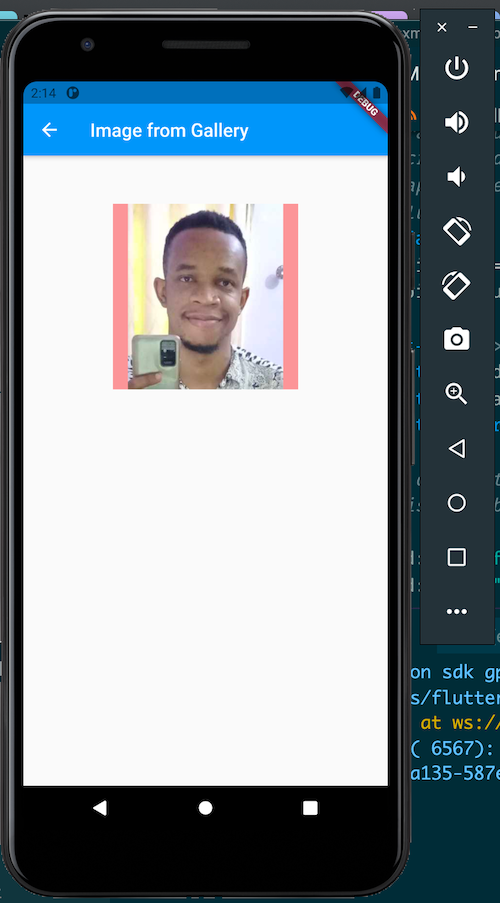 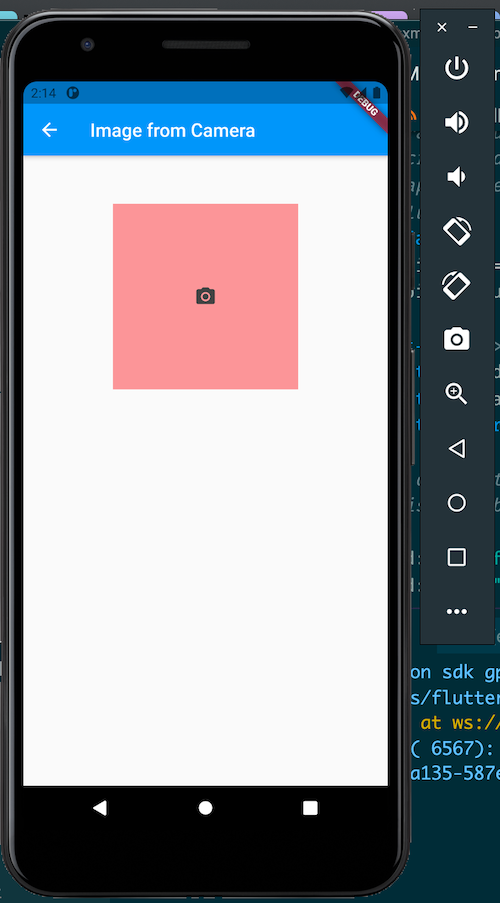 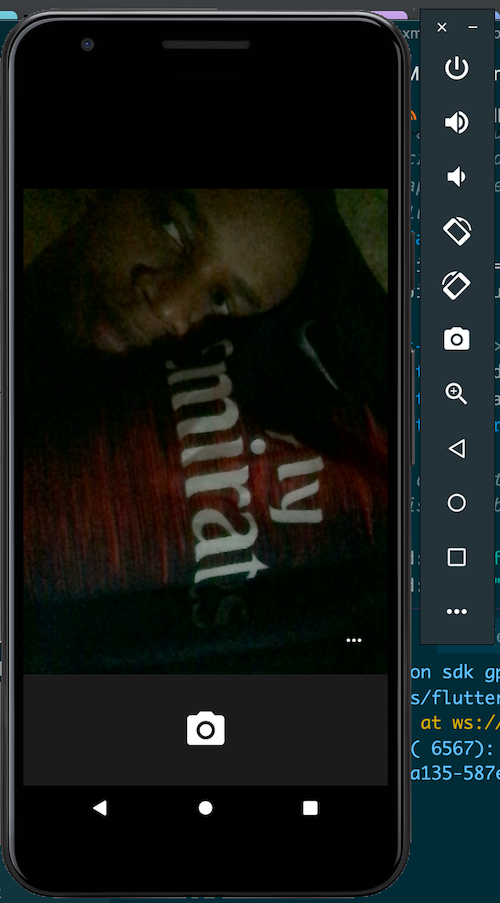 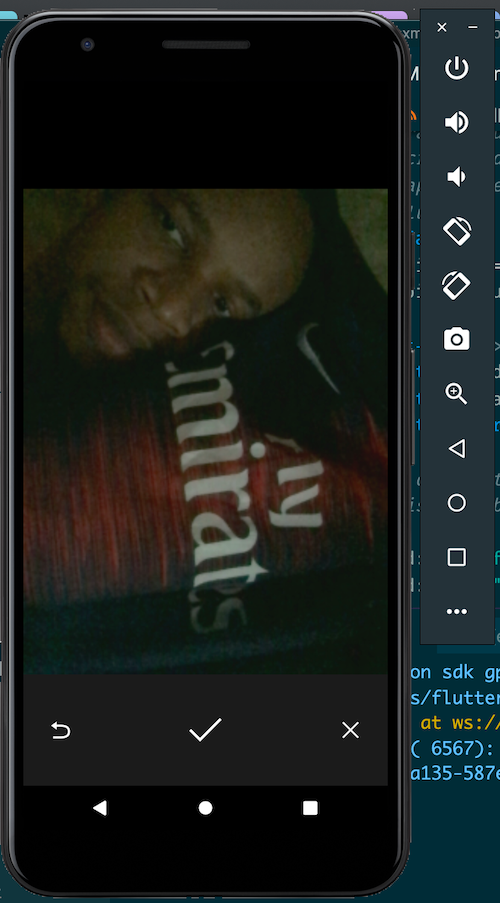 Finally, we built a Flutter project to demonstrate how to use the image_picker plugin in a real-world scenario.

Find the source code for this project on GitHub.