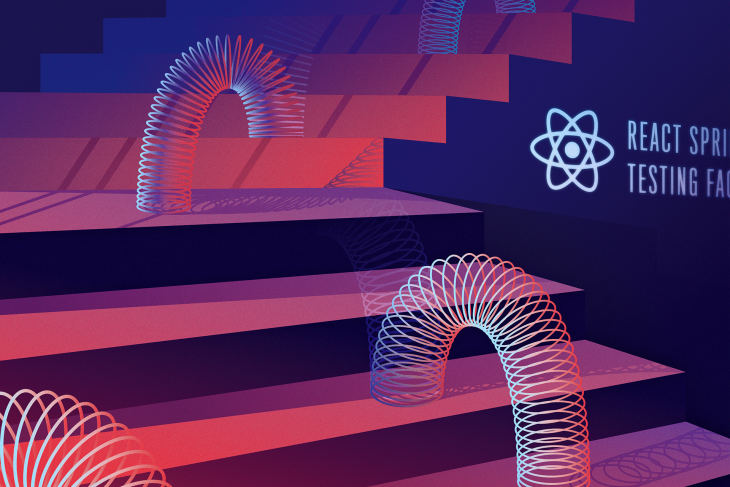 Animations have evolved to very complicated UI element manipulations. They are used to increase interactivity on web pages and to give users an engaging experience while using websites. Developers are constantly looking to find better ways to implement animations without causing a major performance bottleneck.

Animation effects are applied on the UI thread which is usually called frequently, as a result, adding certain animations/animation libraries could have negative impacts on your site. This is why we have chosen to discuss React Spring as a tool you should consider using to animate your React apps. Find out more with examples in the video below.

Having understood what React Spring is, and what it offers, let’s take a look at how we can use it to build seamless animations in React applications. We’ll explore its features to better understand its strengths.

The best way to add React Spring to your application will be via the package managers. Simply open a terminal window on your project’s root directory and run the installation command below:

This makes React Spring widely available in your application for later use.

With the introduction of hooks in React, you can add state to functional components. React Spring takes this up a notch by providing a hook based API which allows you to define and convert data that you would generally pass as props to animated data.

To better demonstrate some of the features of React Spring, let’s take a closer look at the available hooks in the React-spring module. There are five major hooks available in React Spring at the moment:

For each of these hooks, there are several animation effects you can implement, it’s limitless and goes as far as your imagination will take you. We’ll look at some use cases for useSpring , useSprings and useTrail to demonstrate how you can implement them in your React applications.

Import it into the needed component like so, since we’ll be using the hooks API in this explanation:

Here are the two methods for using the useSpring hooks:

Here, if you re-render the component with changed props, the animation will update automatically.

In this case, there is no re-rendering. This method is mostly applied for fast occurring updates. It also has an optional argument (stop) to stop animation.

Since we are animating, we would be moving data from one state to another. Spring naturally comes with two props: from and to to show the initial position and the end position of the animation.

We will discuss this further when explaining the render-in-props API. Now, to get a feel of how the useSpring hook API works, here’s a small demo that shows a simple animated greeting card for a landing page:

From the demo above we can see that the first few lines of code express the initial state and the final position of the box we are trying to animate:

In this example, the content slides in from the top of the page down to the center. The value of -500 marginTop is to set the position off-screen, then define an opacity of 0 as our values for the from prop. We do this to achieve a certain appearance of the box. These values are assigned to contentProps which we then pass as props to animated.div like so:

useSprings is just like useSpring; the only difference is that it is used to create multiple springs, each with its own config. It is mostly used for lists, where each spring moves data from an initial state to a final state. This also provides us with two options on how to implement. Since we are working with multiple values, this method works in two forms.

Overwrite values to change the animation

Here, the animation is updated to each element by triggering a props change. It is simply achieved like this:

From the snippet above, we can see that the list items are mapped to have the useSpring method act on each element. That way, we can trigger the animation to happen on each element.

Pass a function that returns values, and update using “set”

You will get an updater function back. It will not cause the component to render like an overwrite would (still the animation will execute, of course). Handling updates like this is most useful for fast-occurring updates.

How do we use this? Imagine we have a list of people and we wanted a user to know exactly which person is being selected, a cool way to bring more life to this would be to explore this demonstration by Paul Henschel.

useTrial enables us to create multiple springs with a single configuration. It has almost the same configuration as useSpring with a variation in the implementation. It animates the first item of a list of elements while the rest of the elements form a natural trail and follow their previous sibling:

It takes a list of items of any type and their keys. The latter defaults to item => item, however, if your items are self-sufficient as a key, it’ll often be good enough.

The above line in the demo configures the common API of spring to set the default values of the parameters.

The above snippet uses the listed props to set the initial and final conditions of the elements using the ternary operators to indicate the switch.

This method of implementing React Spring in projects was used in class components which was the default mode before React Hooks were introduced in React v16.8. For the sake of inclusiveness, let’s also explore it to accommodate developers on the older version of React. With this method, the importation into projects is a bit different.

The class component implementation of animating a single element using React Spring would use spring as opposed to useSpring. As a result, we would import it into projects like so:

As we mentioned earlier, Spring/useSpring makes use of two props from and to to show the initial position and the end position of the animation like so:

In this case, we are dealing with the class component equivalent of useTrail and it is imported as:

The working principle remains the same however, the mode of transformation becomes:

We can notice new props being used in the example above. They behave like keys that are being used to specify what item the animation is being carried out on. You can find more examples of props being accepted by trial in the docs examples.

The performance advantage of React Spring

The main advantage of React Spring over other animation libraries is its ability to apply animations without relying on React to render updates frame by frame. This advantage is usually noticed when dealing with nested routes or charts. For more information on the implementation of specific performance boosts, check out the official documentation.

In this article, we have analyzed some use cases using React Spring’s Hooks API and also explored the class component equivalents. Seeing the performance advantage and simple syntax of React Spring, I would strongly recommend using this in your projects as smooth animations help in ensuring awesome user experiences.

How to use CSS ::before and ::after to create…

5 Replies to “Using React Spring for animation: Context and examples”