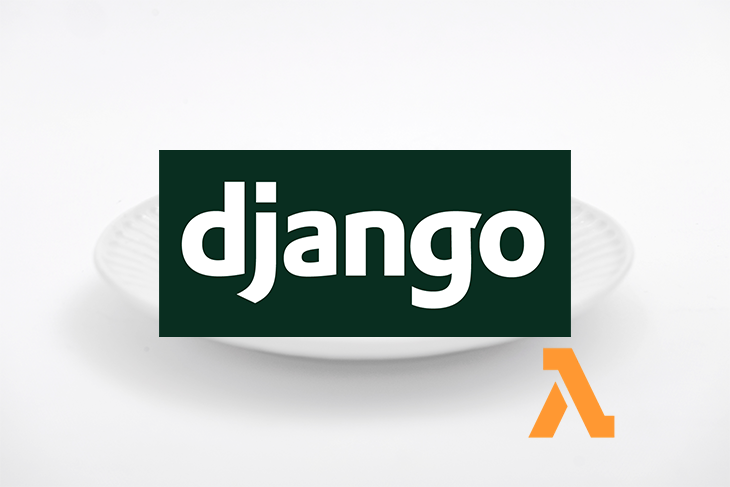 To follow along with this tutorial, Zappa assumes you have the following:

What does it mean to go serverless?

To go serverless simply means that you no longer need to manually maintain your own servers. Instead, you subscribe to a platform such as AWS Lambda that manages the workaround infrastructure for you. A bit of a misnomer, being serverless does not mean there are no servers, but rather that the management of servers, operating systems, and other related infrastructure are handled for you.

AWS Lambda is a popular function as a service (FAAS) that helps you run and manage servers by doing virtually all the heavy-lifting for you. As a bonus, you only have to pay for the time your servers are actually in use.

Zappa is a dev ops toolbox designed to help ease the workload developers face when deploying and managing serverless web applications compatible with the Web Server Gateway Interface (WSGI) on AWS Lambda and the AWS API Gateway. If you are familiar with using Laravel Vapor for managing Laravel applications, then you’ll notice that Zappa serves a similar function for Python web-based frameworks like Django and Flask.

While Zappa has many functions as a deployment tool, here are a few of its most notable advantages:

Next, we will walk through how to set up Zappa and AWS Lambda in a Django app.

Setting up our Django project with Zappa

Zappa supports Python 3.6, 3.7, and 3.8. Before we can set up our Django project, verify that you have a supported version of Python by running:

If an error message is returned, you may want to consider downgrading to an earlier version of Python.

One issue I experienced was receiving an error when running Django version 2.2. There is an SQLite version conflict that seems to throw an error when Zappa is being run. To avoid this, you may need to use version 2.1.9.

Scaffold a Django 2.1.9 with Zappa installed below:

When the install is successful, the output should look like this: 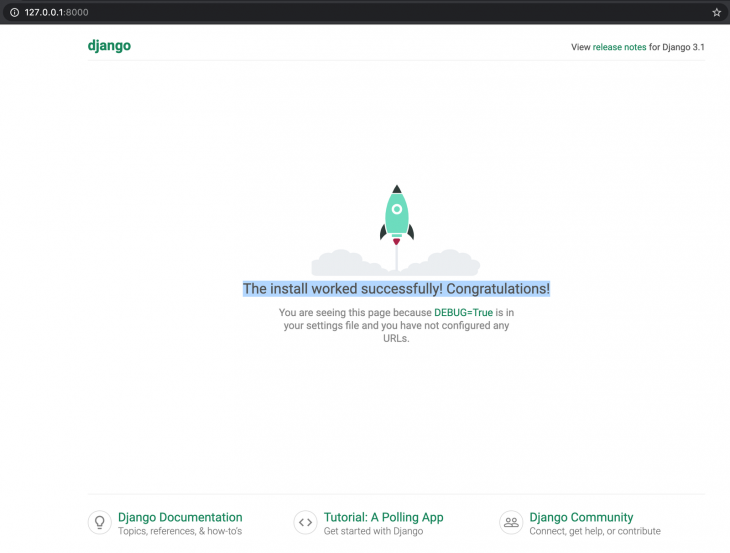 To set up AWS access keys locally on your computer, open up your AWS dashboard console to create an IAM user with Administrator access and grab the AWS credentials section and grab the access_key as well as the asecc_secret_key.

Next, cd into your computer’s root directory and create the a .aws folder inside the .aws folder. Then, create a file called credentials and add your AWS access keys in this format:

Open up the credentials file in a text editor of your choice (I used nano) and add the following:

Before saving and exiting, do not forget to replace your_aws_access_key_id and your_aws_secret_key with the values from the key provided in the AWS console.

Once you’re ready to setup Zappa on your project, initialize the zapp_settings.json file by running zappa init .

When you do this, you are going to be asked a few questions including whether you want you application to be deployed globally. My recommendation would be to decline since this is only a demo project. For the rest of the prompts, select the default options.

At the end of the configurations process, your zappa_settings.json file should look like this:

Finally, you’ll need to specify which region you want your application to deploy in. To do this, open up the zappa_setting.json file and add your specified aws_region to the dev object, for example:

To deploy your application to AWS Lambda in dev mode, run:

Note that when you visit your application’s URL at this stage, you will get a DisallowedHost error message because Django does not recognize the URL where the app is being served from:

To fix this, add the host to the ALLOWED_HOSTS array in the zappatest/settings.py file as show below:

Next, update the remote deployment by running:
$ zappa update dev

You should now see the standard 404 Django page: 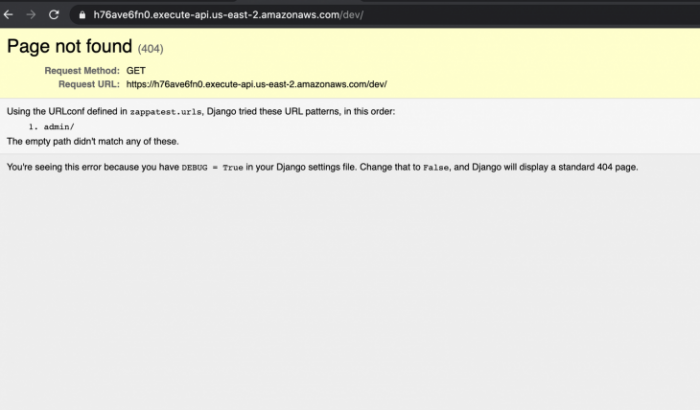 If you were working on a project such as a simple API, this should be enough to get you started.

For more complex projects, if you visit the /admin route to access the django-admin interface, you will see the following result:

This is because our deployed project has not been configured to handle static files. We will discuss this configuration in the next section.

First, create an S3 bucket with a unique name (you’ll need to remember this name for later):

In the “permissions” tab for your bucket, navigate to the CORS rules settings and add the following configuration to allow access from other hosts:

Open up settings.py and include djangos3storage as such:

Place the following block of code anywhere in your settings.py and then replace ‘zappatest-static-files’ with whatever name you used in naming your bucket:

Next, update the changes and push the static files to the bucket by running:

Finally, open up the admin page once more and your page should render correctly:

In this article, we explored serverless architecture in a Django app using Zappa and Amazon Web Services (AWS) Lambda.

We started by getting our Django project up and running locally with pipenv and pip3. Then, we set up our Zappa configurations and deployed to AWS Lambda in dev mode. Finally, we added support for static files with AWS S3 to make sure our web app looks and functions the way we want it to.

While we covered a lot in this article, there is still much to learn about serverless Django. To continue your education, I recommend that you check out the official Zappa documentation on the Python Python Index (PYPI) website, as well as the AWS Lambda docs.

Oluwaseun Raphael Afolayan Follow Developer and digital growth hacker. Saving the world one paragraph at a time. Aspiring ethical hacker and a WordPress evangelist.
« Color picker libraries to use in 2021
Immer and Immutable.js: How do they compare? »