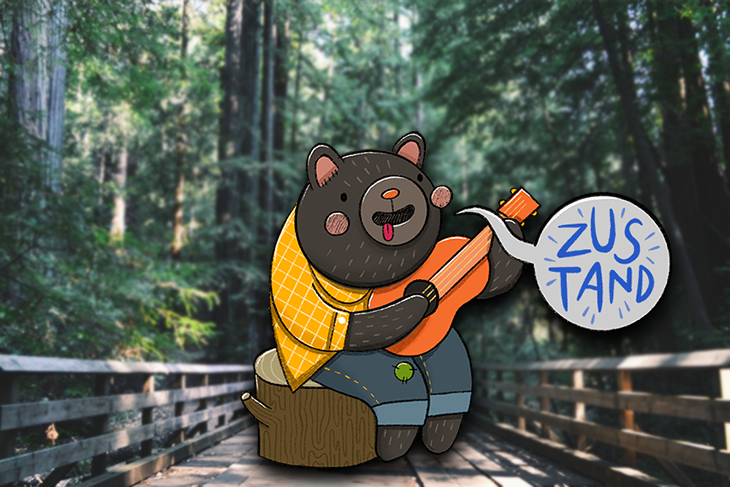 To manage state in modern frontend frameworks, Redux has always been king. But now, many new competitors are entering the fray with new ideas, desperate to overthrow Redux with the promise of ease-of-use and simplicity.

I, for one, am excited about the growing number of new ways to manage your state. In this article, I’ll cover probably the simplest and smallest of all: Zustand.

You’ll learn what Zustand is, how it differs from other modern tools like Jotai or Recoil, and when you should use it over Redux.

First of all, I’m not claiming that Zustand is currently the best tool to use. As in most cases, the question of which tool is the best cannot really be answered, or at least it must be answered with the dreaded phrase, “It depends.”

To get the full picture of Zustand, let’s go over some of the details of the library and how it is positioned in the market and compared to other libraries.

Zustand was created and is maintained by the creators of react-spring, react-three-fiber, and many other awesome tools, Poimandres. At 1.5kB, it’s probably the smallest library of all — you can read through the source code in a matter of minutes.

Getting started with Zustand

Zustand is known for its simplicity. On the (really beautiful) website they created for their package, you can see a very simple example written in just four lines of code that creates a globally available state:

The main function from the state management library is called create. It accepts a callback function as its first argument, which in turn accepts a set function that should be used when manipulating memory.

The function create then returns another function, which in our case, is called useStore. As you can see from the name of the return value, it returns a hook, so you can insert it anywhere in your React application, like so:

Wherever this hook is injected and the state is used, the component will be re-rendered when the state has changed, making it a fully functional global state with these small lines of code.

You could also extract the action, which changes the state anywhere you want from the same hook like this:

But what about performing async actions or fetching something from a server that you save to your store?

Well, you can make your mutation function asynchronous and Zustand will set your state when it’s ready. That way you don’t really have to worry about asynchronous functions inside your component anymore.

State management can almost not be simpler, right? But it looks very similar to other modern tools like Jotai or Recoil, you say? It may seem that way, but let’s look at some of the differences between these libraries.

How is Zustand different from Jotai and Recoil?

Interestingly, libraries Jotai and Zustand are from the same creators. But the difference lies in the mental modal and how you would like to structure your application.

Zustand is basically a single store (you could create multiple stores, but they are separated.) Jotai is primitive atoms and composing them. In this sense, it’s the matter of programming mental model.

Jotai can be seen as a replacement for useState+useContext. Instead of creating multiple contexts, atoms share one big context. Zustand is an external store and the hook is to connect the external world to the React world.

The last sentence is, in my opinion, the most important one when it comes to what makes Zustand so different from other state management tools. It was basically built for React, but is not tied to it.

This means it could be a tool to connect the React world with the non-React world. How is this possible? Because the state is not built on top of react’s context API. You probably also noticed that you don’t need to add a root provider somewhere in your application during installation.

What makes Zustand so special?

Here’s what impresses me about Zustand.

Overall, Zustand is a great library for pragmatic programmers and those who use React, but in combination with another library.

However, Zustand has its pros and cons.

The current state of state management

In my opinion, the days of how we used Redux originally are numbered. Global state management can be quite tricky and, therefore, should be something that is not made artificially complicated.

I’m not saying Redux isn’t useful, but it can cause you to over-engineer your initially simple state, which is why I was so impressed with the idea that Zustand touts simplicity. Now, we have plenty of options to choose from, so Redux may no longer be the default go-to for all of your state management.

But in the end, it can really vary from project to project and to say that there is now this one library that solves all of our problems is not realistic, but at least we are now getting more and more options and it should not be the default option to choose Redux for your state management in all applications.

Lorenz Weiß Follow Hi, I'm Lorenz, a frontend-focused web developer. I'm in love with the internet and its people and interested in everything related to it.
« Scalable state management with Vuex and Nuxt.js
Serverless deployments via Vercel using Node.js »