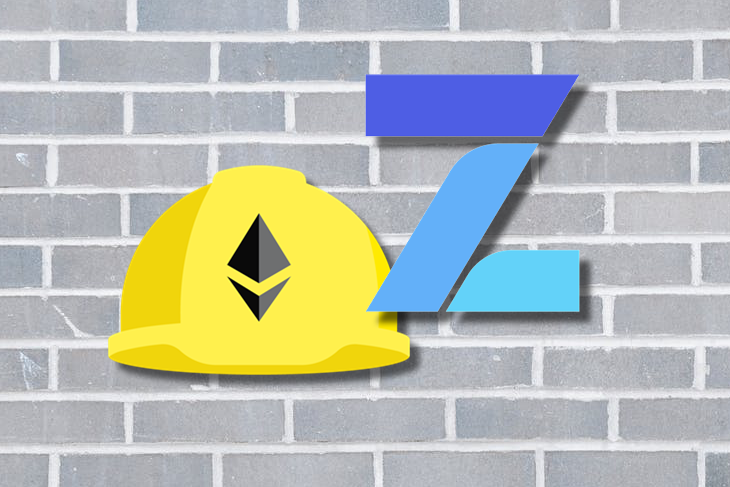 We all know that one of the most impressive features of the blockchain is its immutability property. But it is not advantageous in all cases.

Imagine a deployed smart contract that holds user funds having a vulnerability. Developers should fix the bug as early as possible, like what they can do in the Web2 applications. But in terms of Web3 development, it’s not the same case.

Traditional smart contract patterns don’t allow such hot fixes. Instead, the developers need to deploy a new contract every time they want to add a feature or fix a bug. While it doesn’t seem like a big issue in the beginning, it’ll be a huge overhead when the codebase grows. And every time, the data needs to be migrated from the old contract to a new contract to reflect the current state of the protocol.

To solve this problem, various upgradability patterns have been introduced. Among them, the proxy pattern is considered the truest form of upgradability.

When we speak about upgradability, it means that the client always interacts with the same contract (proxy), but the underlying logic can be changed (upgraded) whenever needed without losing any previous data.

N.B., one can argue that via upgradable proxies, a protocol can even change the underlying logic for their needs (even without the knowledge of their community). There are various methods to prevent that, as DAOs follow timelocks. But, it’s beyond the scope of the article and that itself is a topic for another day.

Here’s a summary of what we’ll cover in this article:

Currently, there are three types of proxy patterns:

What is a diamond pattern?

In a nutshell, a diamond pattern is an upgradeable proxy pattern in which there are multiple logic contracts (facets) instead of one. Whenever a function is called in the diamond proxy contract, it checks the hash table (mapping) to see which facet has the function defined and then delegates the call to that facet. This delegatecall occurs in the proxy’s fallback() method. We can add or remove any number of methods from any facet in a single transaction using a method called diamondCut(). In order to avoid storage collisions, this pattern uses the DiamondStorage technique. It also allows the developers to implement logic in facets, independent of other facets.

What is a Transparent proxy pattern?

To resolve the clashing, OpenZeppelin introduced the transparent proxy pattern. This pattern allows identical function signatures to exist in the proxy and logic contract, but the delegatecall to the logic contract only occurs if the caller is not a contract admin. Otherwise, the function is invoked in the proxy contract itself if it exists or reverts if not.

What is a UUPS proxy pattern?

The UUPS proxy pattern is similar to the transparent proxy pattern, except the upgrade is triggered via the logic contract rather than from the proxy contract.

The below table compares the pros and cons of the diamond, transparent, and UUPS proxy patterns:

When should we use UUPS?

OpenZeppelin suggests using the UUPS pattern as it is more gas efficient. But the decision of when to use UUPS is really based on several factors like the business requirements of the projects, and so on.

The original motivation for UUPS was for deploying many smart contract wallets on the mainnet. The logic could be deployed once. The proxy could be deployed hundreds of times for each new wallet, without spending much gas.

As the upgrade method resides in the logic contract, the developer can choose UUPS if the protocol wants to remove upgradeability completely in the future.

Setup with Hardhat and OpenZeppelin

As we’ll be using Hardhat for development purposes, you’ll need to have NodeJS and NPM installed in your machine.

Once Node.js is installed and set up, you can install Hardhat globally in your machine from your command line by running the command npm install hardhat -g.

Once Hardhat is installed, you can create new Hardhat projects easily!

Let’s create a fresh new directory for our project:

Initialize a new Hardhat project by running npx hardhat and choosing the initial config for the project.

Now Hardhat will install some of the required libraries. Other than that, we’ll require some additional npm modules as well for the UUPS pattern. Run the following command to install the modules.

Once everything has been installed, the initial directory structure will look something like this: 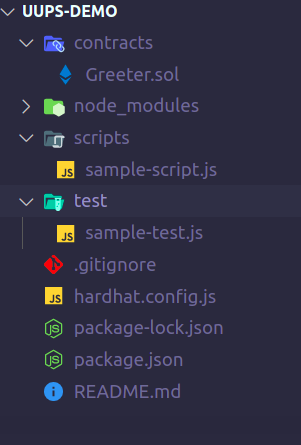 N.B., the file names and the contents will be modified as we proceed.

Making the implementation and proxy contracts

Create a new file called Pizza.sol inside the contracts directory and add the following code:

This is a simple Pizza contract that has three methods:

Before doing that, we have to update the hardhat.config.js file with the following contents:

Once the .env file is created, you can compile the contracts by running npx hardhat compile in your terminal.

Now let’s deploy our contract. Inside the scripts directory, create a new file called deploy_pizza_v1.js and add the following contents:

Now you can deploy the contracts by running the following command in the terminal:

You should see something like this. The address will be different!

You can copy the address of the Pizza contract from Etherscan and verify it by running the command below:

N.B., after deployment, if you’re confused which contract is the proxy or implementation, the proxy contract source code will be already verified on Etherscan (in most cases). The unverified will be the implementation contract!

Once verified, your Etherscan transactions will look like this:

If you check the Pizza contract in Etherscan, the values like owner, slices, etc. will not be set or initialized because in the proxy pattern, everything is stored and executed in the context of the proxy contract.

So in order to interact with the Pizza contract, you should do it via the proxy contract. To do that, first we need to inform Etherscan that the deployed contract is actually a proxy.

In the Contract tab of the proxy contract, there’ll be a small dropdown above the source code section (on the right side).

Choose “Is this a proxy?” option from the dropdown and then Verify. 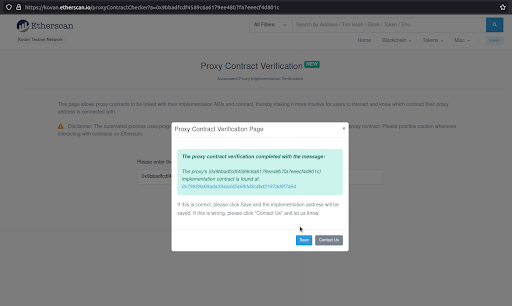 You can see Read as Proxy and Write as Proxy options in the Contract tab of the proxy contract.

Now you can interact with the Pizza contract using those options!

After some time passes, let’s say we have to include additional functionality to our Pizza contract. For example, let’s make a simple function to refill slices and a function to return the current contract version.

We can create our PizzaV2 contract. Inside the contracts folder, create a new file called PizzaV2.sol, add the following contents, and save the file:

N.B., the PizzaV2 contract inherits from the Pizza contract. So all the functions including the two newer functions will be present in the V2 contract.

Once the file is saved, now we can upgrade our Pizza contract to PizzaV2. Inside the scripts directory, create a new file upgrade_pizza_v2.js, add the following contents, and save the file. It is responsible for upgrading the deployed contract:

You can run the following command to execute the upgrade:

N.B., if you face any errors when running the above command, retry it two or three times. It should work.

If you check Etherscan, you can see there’ll be another two transactions from the deployer wallet. The first one is the deployment of the PizzaV2 contract and the second transaction will be the upgradeTo call in the Pizza contract to perform an upgrade. This makes sure that the proxy contract points to the newly deployed PizzaV2 contract.

You can verify the PizzaV2 contract from the terminal by running:

If you check the Write as Proxy tab inside the Contract tab of the proxy contract in Etherscan, you can see the newly created view method — refillSlice() — along the older methods. Also, there will be a pizzaVersion() method in the Read as Proxy tab, which confirms that the upgrade is successful! 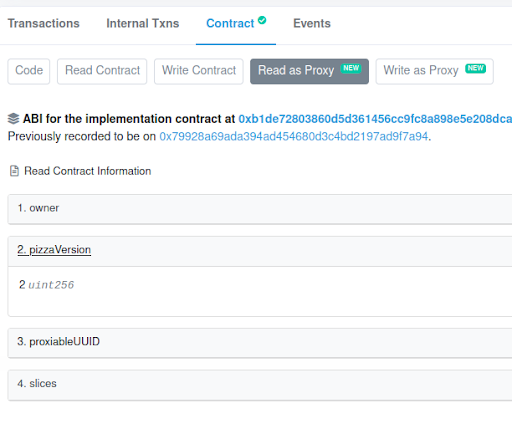 Despite the warnings, UUPS is a very gas-efficient proxy pattern that has several advantages. The code for this project along with some unit tests can be found in the GitHub repo here. Feel free to play around with the code.