Oscar Jite-Orimiono Follow I'm a self taught frontend web developer. I build websites so everyone finds a home online. The digital space is massive, full of endless possibilities, let's explore it together! 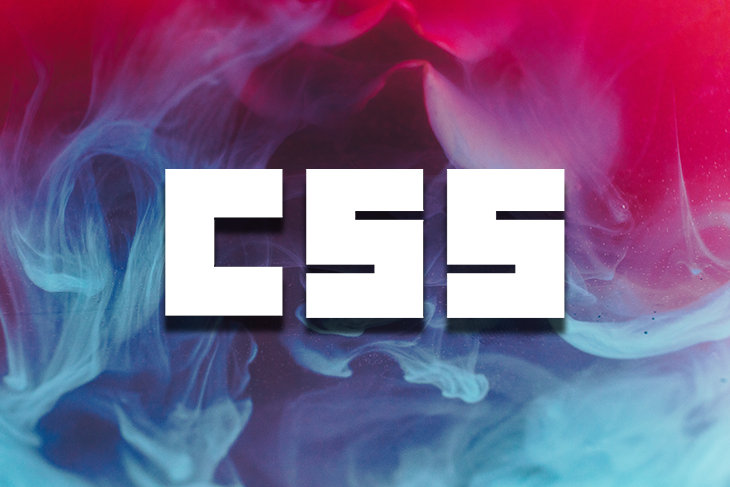 Animations can be subtle or elaborate — you decide. In this post, we’ll look at timing functions. Timing functions help control how animations behave over a specified duration. Before we go further, let’s look at the CSS properties responsible for creating animations in the first place.
There are two ways to animate web elements in CSS: the animation and transition properties.

You might be wondering, what’s the difference? I’ll tell you. animation needs @keyframes, meaning a start and endpoint must be specified. Keyframes are used for multistep animations.

Simpler web animations can be created using transition. The animation must be triggered by something, like a click or :hover.

animation and transition are shorthands for an array of properties that control duration, delay, iteration, etc. But, as stated earlier, this post will focus solely on timing functions.

What are timing functions?

The same with transition:

There are six transition-timing-functions in CSS, and they include:

These are also called easing functions.

linear animations move at a constant speed. This function isn’t exactly an easing function, as there’s no variation from start to finish. The speed curve will be a straight line graph. 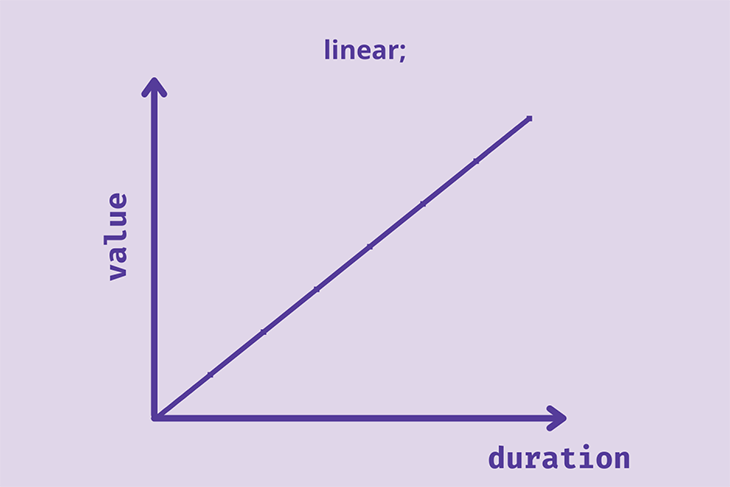 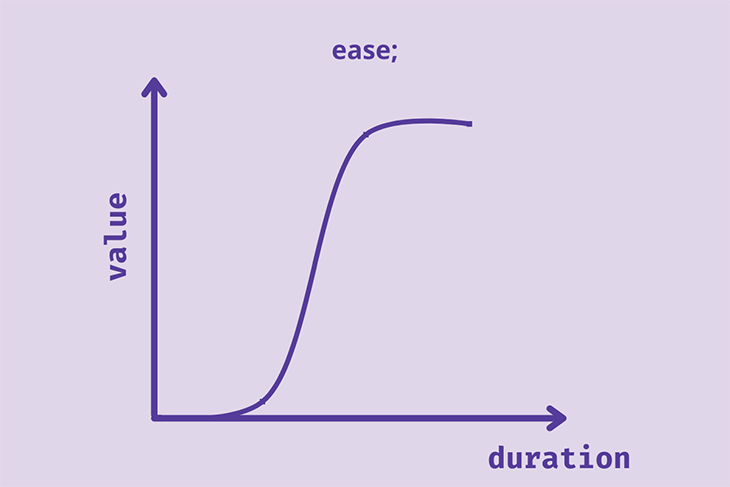 The speed of the animation at the end is slower than at the start.

Let’s demonstrate these two timing functions. We’re going to have a race across the stars!
Meet our racers, ease and linear:

Let’s use a simple HTML markup:

Then some basic CSS:

Now, we’ll add the animation property; the trigger is going to be :hover.

See the Pen
Linear vs Ease timing function by Oscar-Jite (@oscar-jite)
on CodePen.

At first glance, it looks like ease is faster than linear, but they both have the same animation-duration. When you watch closely, you’ll see that they both end at the same point. It seems we have a tie!

Animations with the ease-in timing function start slow and speed up towards the end. ease-out is the opposite, with a fast start and slow end.

ease-in-out animations start slow, speed up in the middle, and end slow. This is similar to the ease timing function, but here the curve is symmetrical. The speed of the animation at the start is equal to the speed at the end. 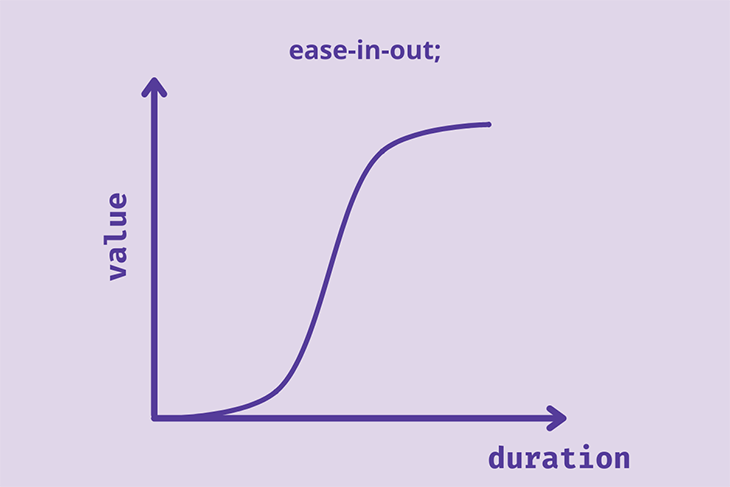 Ready for the second race?

See the Pen
Ease-in, Ease-out and Ease-in-out by Oscar-Jite (@oscar-jite)
on CodePen.

The cubic Bezier curve is defined by control points that draw a smooth curve. All easing functions have Bezier curves.

P1 and P3 must be within 0 and 1. P2 and P4 can be as high as possible and can also hold negative values. It’s best to keep all control points between -1 and 1 to avoid super jerky and bouncy animations.

Hover on the rockets to see the result:

You can choose to manually enter the values for the control points, but it might take time to find the right easing for your animation. There are two ways you can choose the perfect cubic-bezier() speed: using the inspector tool or using a cubic Bezier generator.

First, the animated element should be given any timing function. Access the dev tools by right clicking on the web element and selecting Inspect or Inspect element, depending on the browser.
If you’re using the animation or transition shorthand keyword, there will be a dropdown icon beside the property name. Click that to reveal a list of multiple property values that include the timing function. Otherwise, you have it as a separate property. 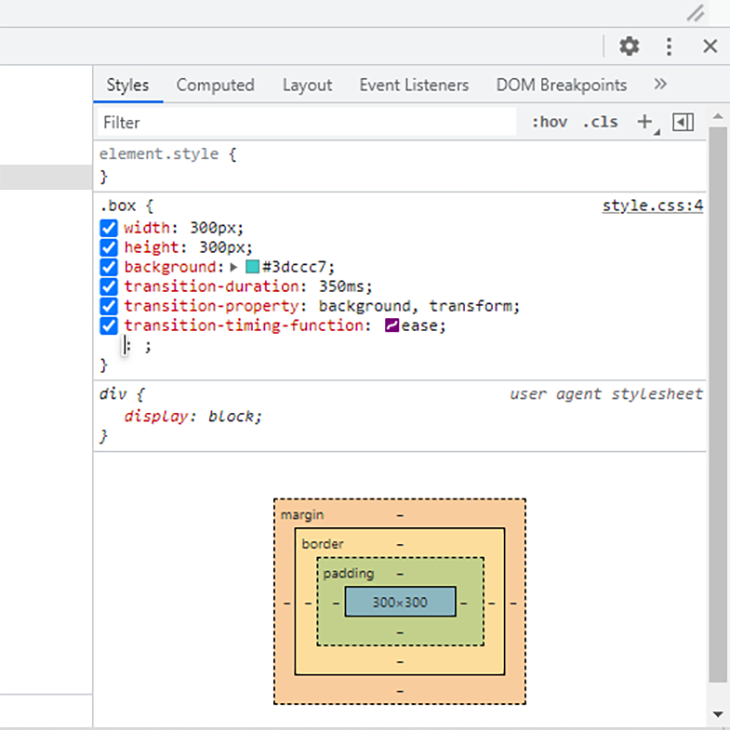 You’ll find a curve icon beside the name of the timing function that opens up a cubic Bezier editor. You can compare the default easing functions. 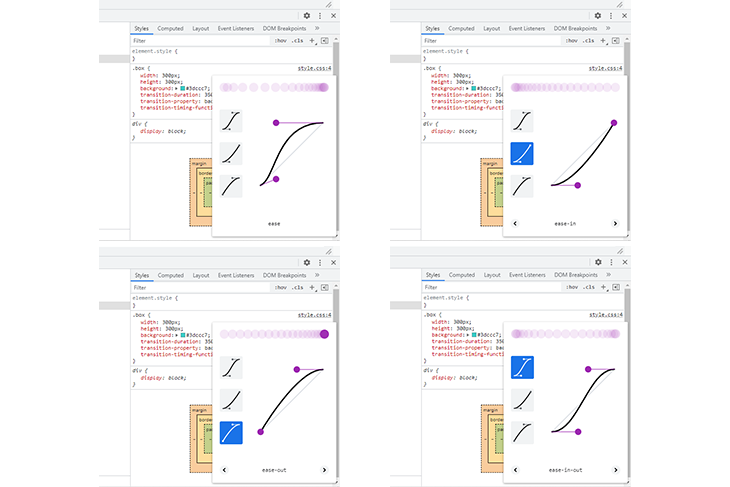 Or cycle through their variations. Click on and adjust the handles to get the cubic-bezier(). There’s a visualizer to help you decide.

When you find a suitable speed curve, copy the cubic-bezier() and paste it into your project.

Head over to cubic-bezier.com and you’ll find a great tool that helps you create Bezier speed curves. Play with the handles until you get a curve you like. Preview and compare with the default easing functions. Copy and paste into your project and you’re all set!

We’re going to create some scroll animations. The elements will come into view as you scroll down the page.

Here, you can see all the easing functions in action as you scroll down. The HTML is straightforward.

We start with a simple setup:

After some basic styling, each element is given its own animation:

All elements that will be animated have the reveal class, which will hide the elements until the animation is triggered. You can give it any name you like.

The scroll animation is controlled with this JavaScript function:

The condition for triggering the animation is when the elements come into view as you scroll down. This function tracks the distance the element has scrolled on the page, elementTop, until it reaches the predefined distance where it should be made visible, elementVisible.

Next up, the @keyframes:

These timing functions break animations into equal sections or steps.

The step-end timing function starts the animation after the first @keyframe and skips a step at the end. step-start is the opposite: the steps start as soon as the animation begins.

Let’s demonstrate how it works:

The step-start rocket is a step ahead because it jumps to the first @keyframe as soon as the animation begins.

If you want to be a bit more intricate, you can use steps() to specify the number of steps or sections you want in your animation. For instance:

There are keywords you can use with the steps() timing function in addition to the number of steps:

The result is here:

See the Pen
Step jump by Oscar-Jite (@oscar-jite)
on CodePen.

These global properties work for every CSS property. They include:

The following properties and functions are supported on all modern browsers:

Since we’re dealing with timing, there’s a property that can be used alongside the timing functions: -delay.

animation-delay and transition-delay make animations wait for a moment before they start.
You can include it with the shorthand:

No matter the order of the properties, the second time value in the declaration will always be the delay property. So, if we had a declaration like this:

The transition-delay is 1s. This also applies to animation.

Let’s demonstrate with the rockets:

See the Pen
Delayed animation by Oscar-Jite (@oscar-jite)
on CodePen.

This could be used to load different sections of a webpage without having to define a different animation or transition for each section.

Animations are a great way to interact with visitors and deliver engaging content. It is important that they are kept to a minimum, however, as animating too many properties on the same webpage or at the same time can have a detrimental effect on performance. Also, I recommend keeping the duration short. One second is longer than you think, and animations should ideally be in milliseconds.

We’ve looked at how timing functions control the speed and behavior of web animations. From easing to step functions, can you see them in practical scenarios? Buttons, progress bars, text cards, and so much more can be animated. Try them out and create something great!

Oscar Jite-Orimiono Follow I'm a self taught frontend web developer. I build websites so everyone finds a home online. The digital space is massive, full of endless possibilities, let's explore it together!
« Implementing a secure password reset function with Flutter and Firebase
Debugging Tailwind CSS and Next.js »